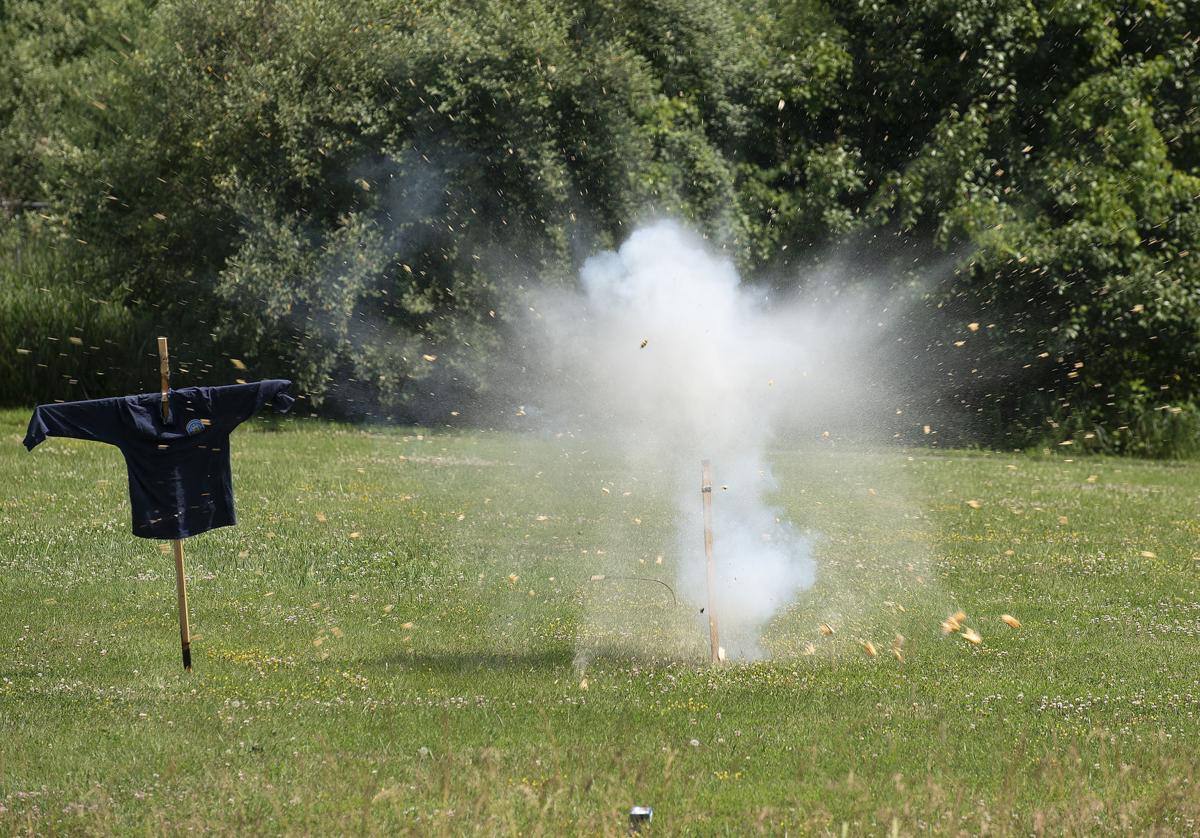 A cantaloupe is blown apart by an M-80 explosive Wednesday as part of a demonstration of the dangers of fireworks at the fireworks safety press conference at the James N. Robey Public Safety Training Center in Marriottsville. 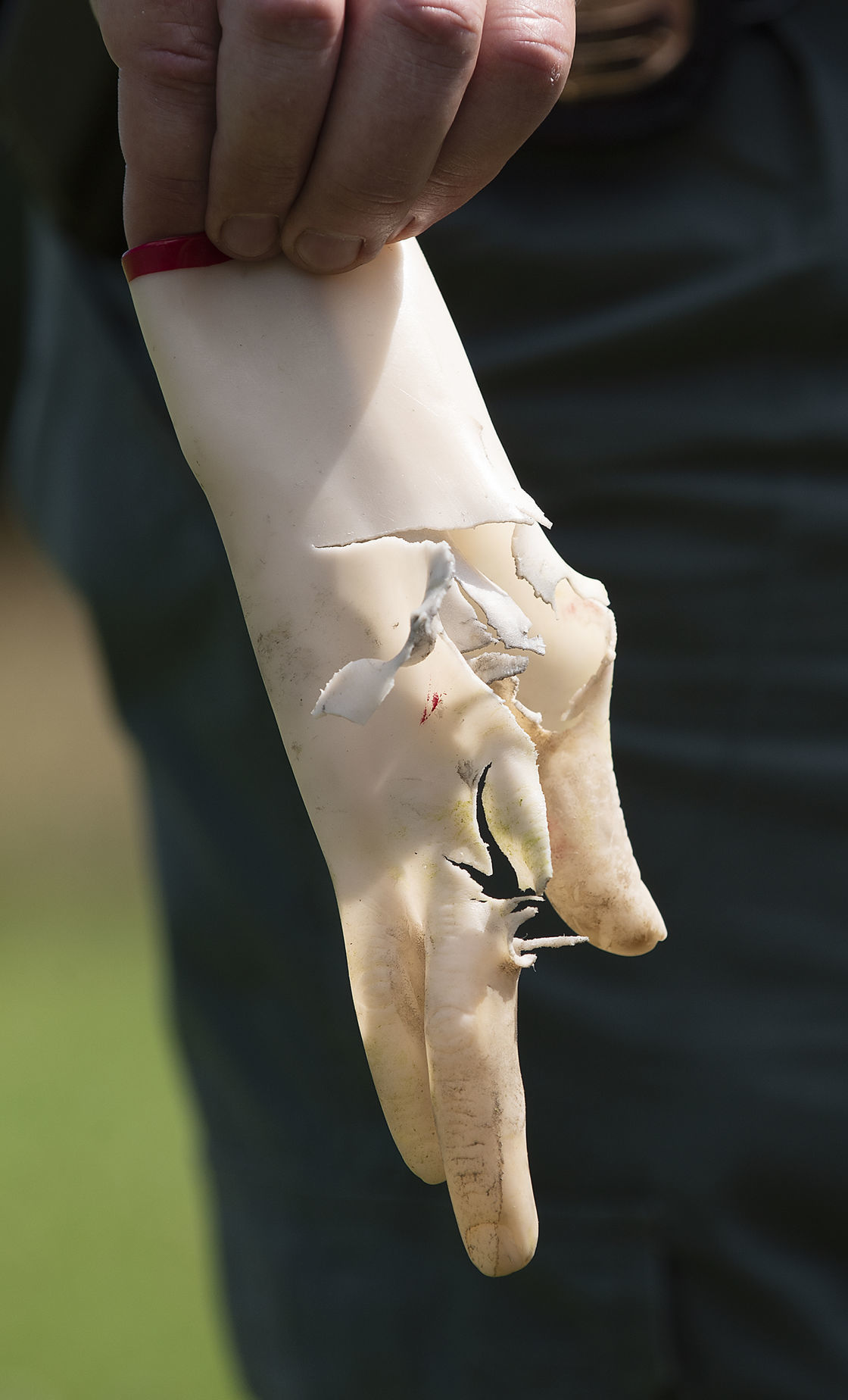 A glove with several fingers blown off by an M-80 explosive is displayed Wednesday at the James N. Robey Public Safety Training Center in Marriottsville. 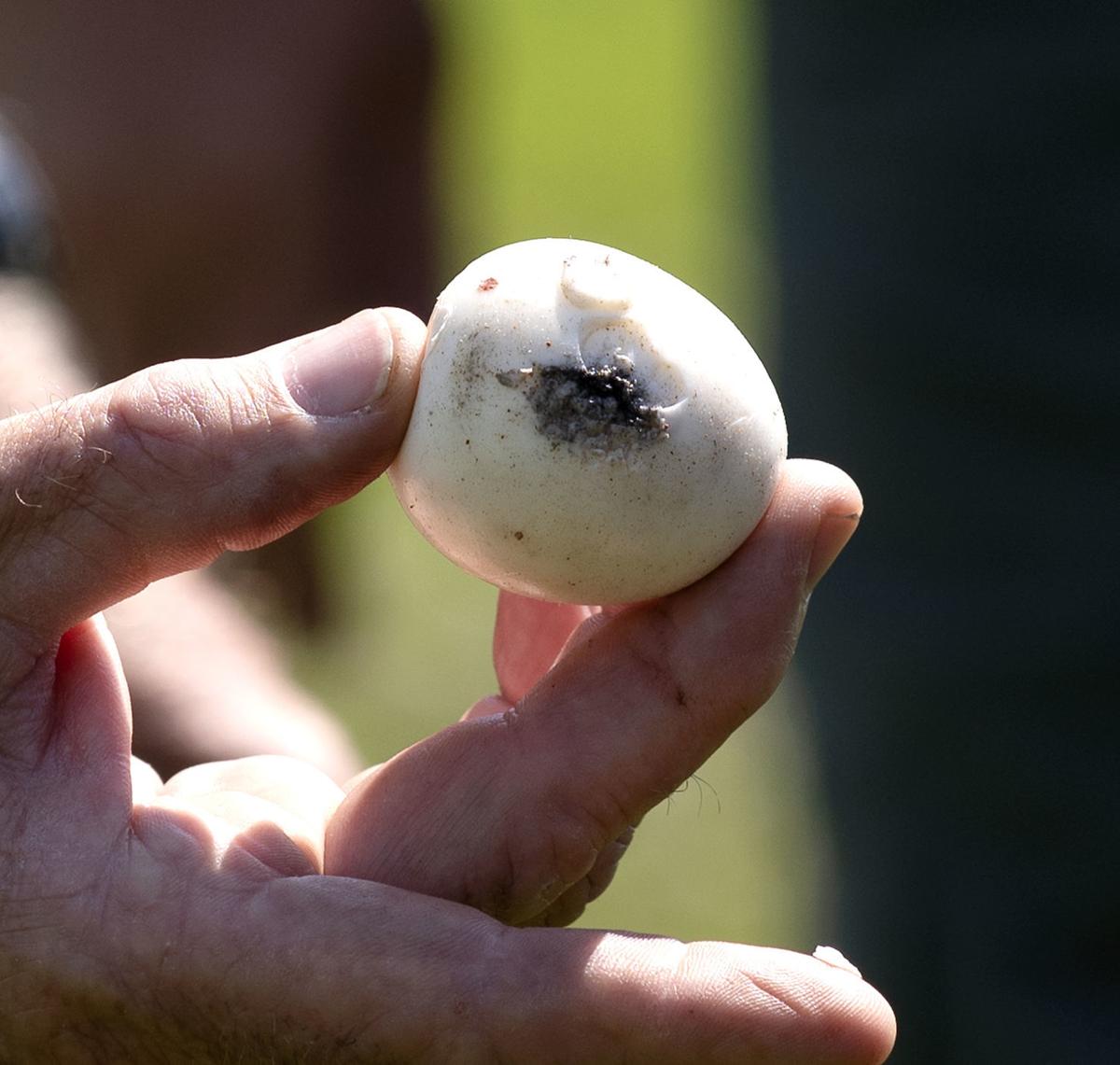 Damage to an egg is displayed after a firecracker was set off next to it Wednesday to simulate what can happen to a human eye when a firecracker explodes near it. 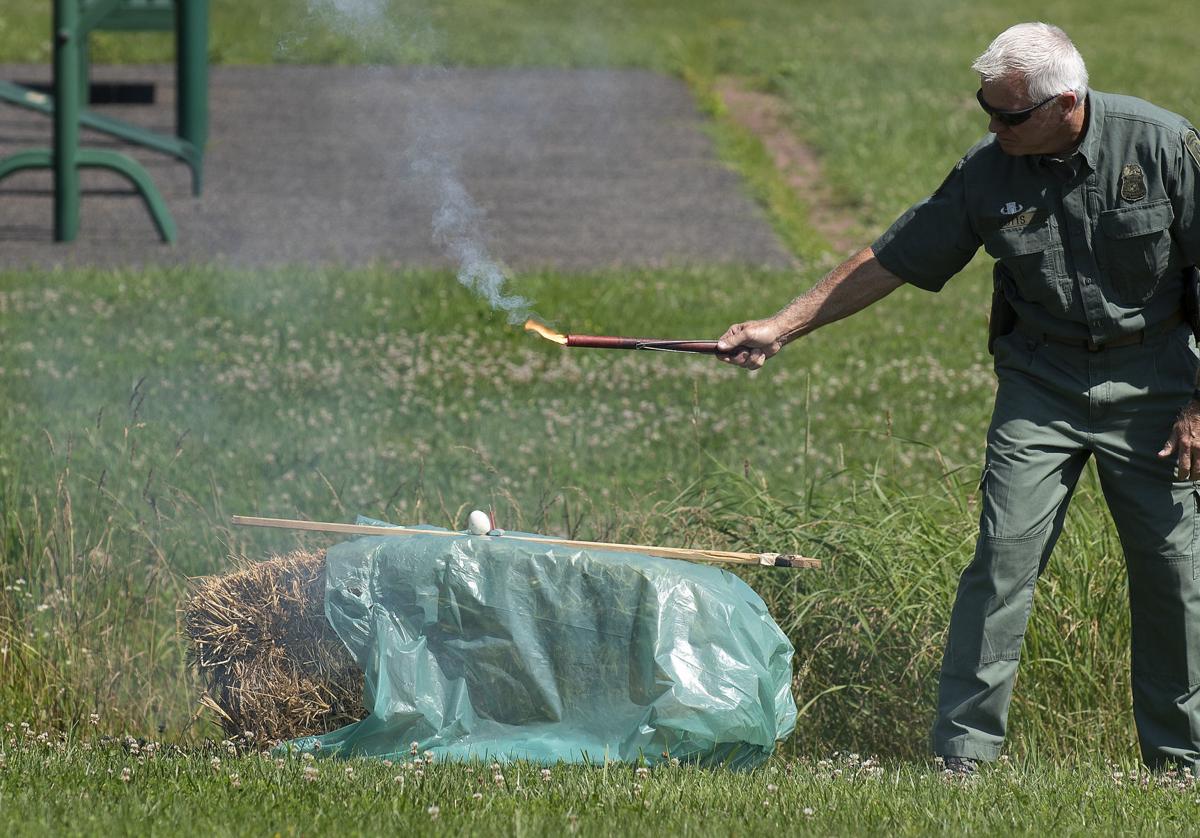 A bomb squad member prepares to ignite a firecracker that is placed next to an egg to simulate damage to a human eye at the fireworks safety press conference Wednesday at the James N. Robey Public Safety Training Center in Marriottsville, MD.

A cantaloupe is blown apart by an M-80 explosive Wednesday as part of a demonstration of the dangers of fireworks at the fireworks safety press conference at the James N. Robey Public Safety Training Center in Marriottsville.

A glove with several fingers blown off by an M-80 explosive is displayed Wednesday at the James N. Robey Public Safety Training Center in Marriottsville.

Damage to an egg is displayed after a firecracker was set off next to it Wednesday to simulate what can happen to a human eye when a firecracker explodes near it.

A bomb squad member prepares to ignite a firecracker that is placed next to an egg to simulate damage to a human eye at the fireworks safety press conference Wednesday at the James N. Robey Public Safety Training Center in Marriottsville, MD.

An ear-splitting crack echoed across the field behind the James N. Robey Public Safety Training Center in Marriottsville.

As the acrid stink of powder gradually dissipated, a member of the Maryland Office of the Fire Marshal’s bomb squad carried the charred remains of a hard-boiled egg from where it lay next to the exploded M-80 back to Deputy State Fire Marshal Dale Ednock, a bomb technician. Shifting the egg around in his palm, Ednock pointed out the burn marks and gashes cut into the soft orb, which was chosen as a suitable substitute for a human eye. A large percentage of fireworks-related injuries reported across the country every year are eye injuries, and Ednock’s agency hopes to prevent future such injuries in Maryland.

“So there was a very small amount of explosive in that firecracker, however, that overpressure and the fragmentation coming off of it is what poses the hazard and does the damage to the eye,” Ednock said at the fire marshal’s office’s annual pre-Independence Day safety conference on Wednesday.

A bit later, Dr. Dean Fiergang, a pediatric ophthalmologist with the Maryland Society of Eye Physicians and Surgeons, provided a more nuanced analysis of the prop eyeball.

“If you look deep you can see that crack in the egg, it goes about a third of an inch deep into there,” Fiergang said, pointing to a thin gash cut into the egg. “With that type of energy and that type of trauma to the interior of the eye, you can have tears in the iris with bleeding, you can have traumatic cataract formation, retinal detachment, and those are the types of injuries that will have a permanent impact and perhaps permanent vision loss.”

While fireworks-related injuries are relatively rare in Maryland — only 17 were reported across the state last year — Brian Geraci, the state fire marshal, said the numbers are likely under-reported because many people who suffer minor burns don’t go to the hospital to avoid fines that accompany illegal fireworks possession.

Battalion Chief Kenny Poole, Frederick County’s fire marshal, agreed, saying the real number of victims is probably significantly higher. Last year just one person checked into Frederick Memorial Hospital over the Fourth of July weekend with burn injuries that the hospital later determined were caused by the mishandling of fireworks. The hospital reported the injury to the county fire marshal, but no fines or charges were ultimately filed, Poole said.

“I can’t recall a really significant fireworks injury in my time as the fire marshal, but that’s not to say it hasn’t happened, because, again, most of the time, people are doing whatever they can not to report them to us,” Poole said. “A lot of times, especially if it’s just a minor burn, they won’t even go to the hospital because they know we’ll find out. If it’s a more serious injury, they might try to go to a hospital out of the area.”

Anyone found in possession of illegal fireworks could face a fine of up to $250 per firework and anyone found selling banned fireworks can be fined $1,000, according to state law. Homemade fireworks such as M-80s or “quarter sticks” are considered improvised explosive devices and carry even steeper fines, possessing these dangerous items is classified as a felony with fines up to $250,000 and the possibility of 25 years in prison.

Back at the training center, another deafening explosion announced the destruction of a plastic prop hand, a demonstration used year after year to show just how destructive illegal, homemade fireworks can be. When the remains of the prop were finally located, another specialist, Dr. Ryan Zimmerman, an attending hand surgeon at the Medstar Union Memorial Hospital’s Curtis National Hand Center, was standing by with his professional opinion.

“To be sure, this is a recreation, but it was thrown about 30 feet and what we have left here is the thumb with a cut that goes all the way down to the wrist and the index finger and the middle finger are gone, they couldn’t be found even by trained people searching the field,” Zimmerman said, motioning to the charred plastic hand. “... So this would be a life-altering injury for sure. This hand could never be back to normal.”

Imagining real-life instances of the injuries described by Zimmerman and Fiergang went directly to the point fire safety officials wanted to make as the Fourth of July approaches.

“We’d rather have folks take their families to a public fireworks display instead of having a display in their backyard and end up having a tragedy, because even the legal fireworks can be unsafe,” Geraci said.

The Office of the Frederick County Fire Marshal approves, inspects and observes all sanctioned fireworks displays in the county.

A complete list of authorized, professional fireworks displays is available on the website for the Office of the Maryland State Fire Marshal. The following are displays approved to take place in Frederick County:

It’s like the story of the small town with two barbers. Always get you hair cut by the barber with the worse haircut.

Apparently more people are injured slicing bagels than playing with fireworks. Stop wasting time and space on this.

These fire marshalls are wasting their time. July 4 is the one time of the year when the uneducated get to go into DC and VA, or even farther south where the good stuff is available year round, bring it back to MD and have a blast. Some of their kids will get their fingers blown off but hey, it's all part of the fun. That's what emergency rooms are for. In the South this goes on all the time. The sound of explosions is music to their ears. They play Dixie during fireworks shows.