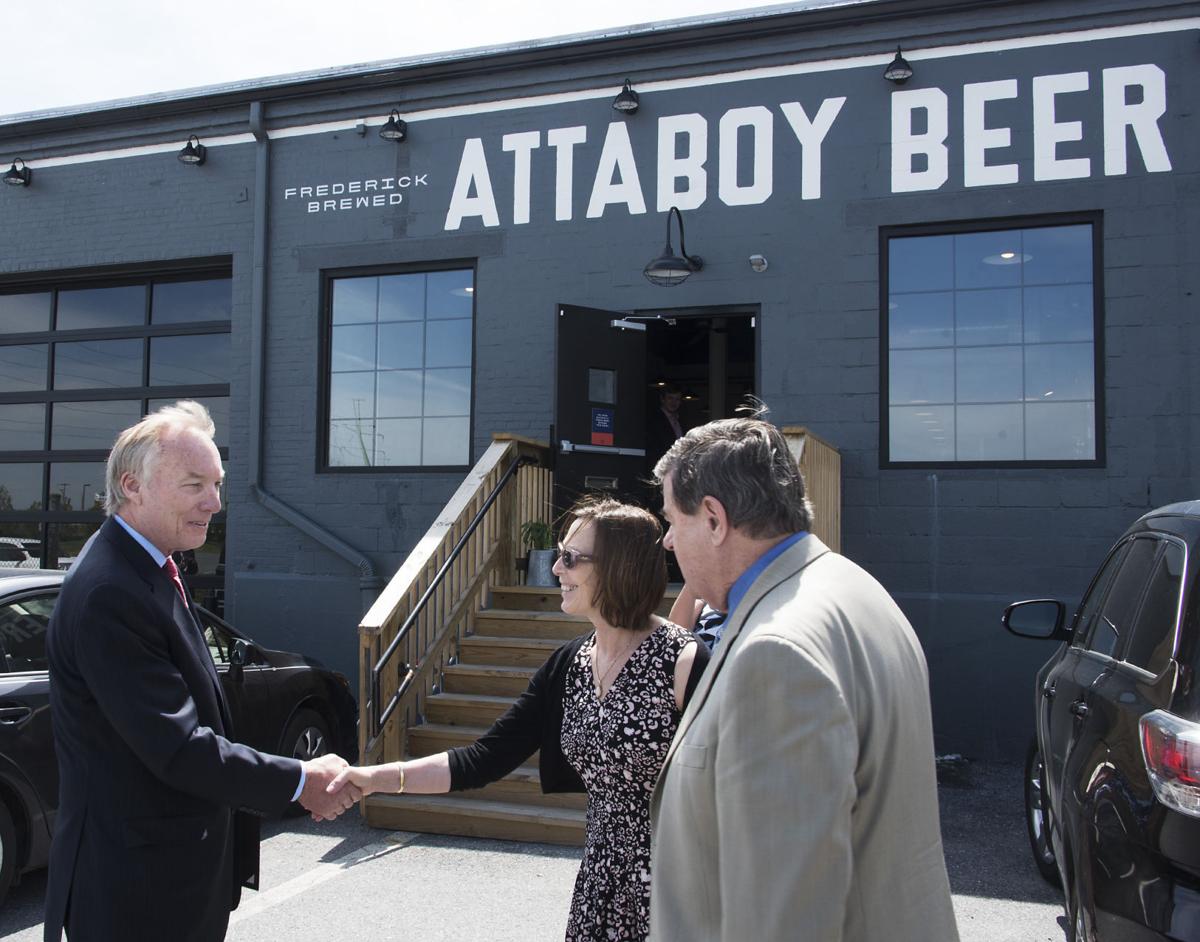 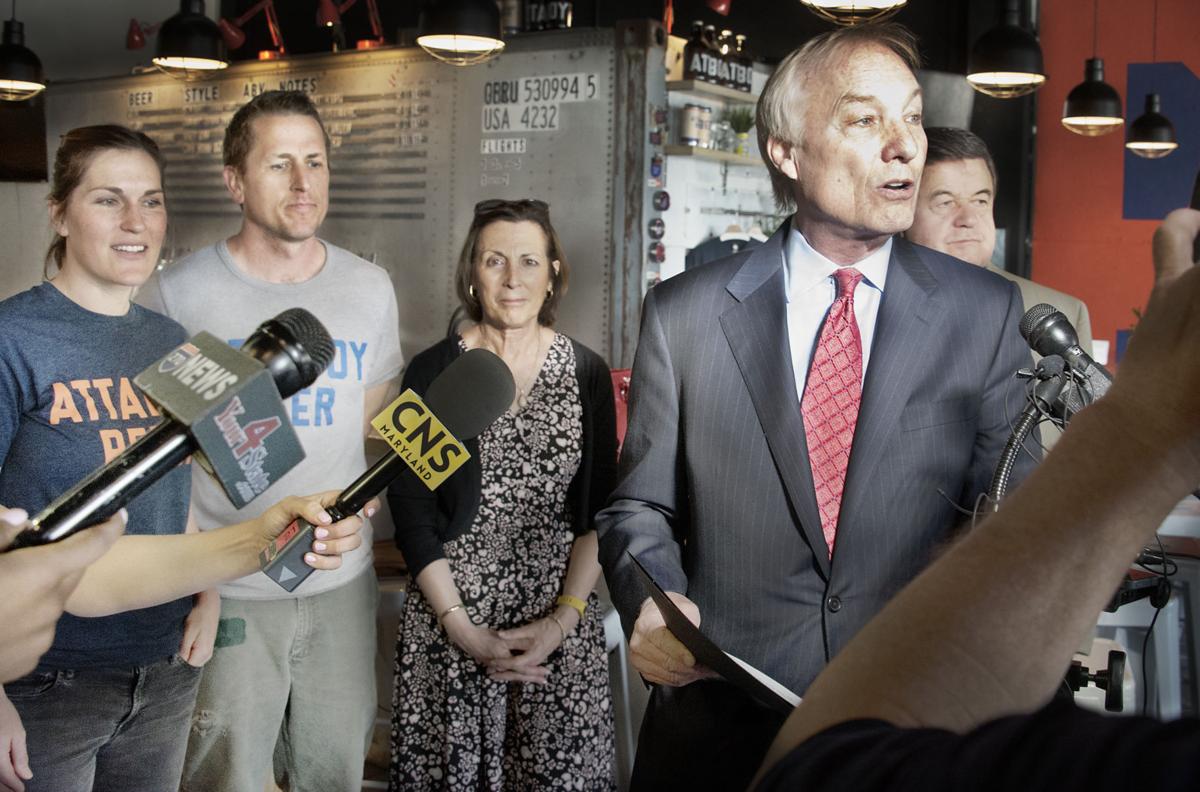 Maryland Comptroller Peter Franchot announces that his office will be putting together a task force to take another look at the state’s beer laws at Attaboy Beer brewery Tuesday afternoon in Frederick . In the background are, from the left, Attaboy Beer owners Carly and Brian Ogden, Del. Karen Lewis Young, and Sen. Ronald Young.

Maryland Comptroller Peter Franchot announces that his office will be putting together a task force to take another look at the state’s beer laws at Attaboy Beer brewery Tuesday afternoon in Frederick . In the background are, from the left, Attaboy Beer owners Carly and Brian Ogden, Del. Karen Lewis Young, and Sen. Ronald Young.

The General Assembly passed a bill that opponents say restricts the growth of breweries in Maryland, but Frederick’s brewers aren’t drowning their sorrows.

“We’re just chugging along,” said Carly Ogden, co-owner of Frederick’s Attaboy Beer. “For the brewers here, we don’t have a choice but to band together and to work hard and to engage the public.”

In response to the passing of House Bill 1283, Maryland Comptroller Peter Franchot announced Tuesday that his office will launch a task force to examine the state’s beer laws.

Standing in the taproom at Attaboy Beer, Franchot expressed displeasure with the bill, which has been passed by the General Assembly and awaits final action by Gov. Larry Hogan, a Republican.

The bill, prompted by a move by Guinness’ parent company, Diageo Beer Co. USA, to open a large brewery taproom in Baltimore County, paves the way for that project and increases brewery samples to a pint and sets a new 3,000-barrel limit for on-site consumption in taprooms.

But that final provision is not entirely without controversy. The bill would increase the annual barrel limit — currently capped at 500 barrels — to 3,000. But brewers that sell more than 2,000 barrels in their taprooms would have to buy the additional 1,000 barrels from a wholesaler at a markup.

The bill would also limit the hours that new breweries would be able to keep taprooms open, while allowing existing brewery taprooms to keep their current hours.

Opponents say the bill sets an uneven playing field in the industry and unnecessarily restricts the future growth of brewery taprooms.

“I was disappointed and astounded that the Legislature passed a bill that will stifle the growth and success of Maryland’s craft brewing industry,” Franchot said.

National practices and laws in neighboring states will be looked at to determine what changes need to be made.

An alternate bill in the General Assembly sought only to increase barrel limits this legislative session, but stalled. House Bill 1283, which represented compromise between brewers, wholesalers and retailers, moved forward so late in the session that Ogden said brewers didn’t have a chance to find numbers or monetary support that would justify striking the added restrictions.

“I think during the Legislature we had a lot of people give testimony — heartwarming testimony about what the bill would do,” Ogden said. “I think what we were missing in our testimony was the hard data, so I’m excited to geek out on the numbers and see how many jobs and how much money Maryland is bringing in compared to the other states where the laws are more lenient.”

The effects of the bill have already been felt in Maryland, Franchot said. Before the bill passed, a brewery in Howard County was a month away from opening. But the passing of the bill caused investors in the brewery to back out, he said.

Joseph Shapiro, assistant comptroller, said he could not reveal the name of the brewery, because it could still potentially open. The investors are trying to persuade the brewery to move to Virginia, Shapiro said.

Even if the task force is successful in helping to make changes to Maryland’s beer laws, there will almost certainly be losses before the law changes, said Monocacy Brewing Co.’s Todd Perkins.

“It’s hard to tell how many breweries won’t come because of the new laws,” Perkins said. “But if you couple the nationwide slowing of craft breweries that has happened recently with these laws, I won’t be surprised if you see the industry slow down locally.”

Hogan said Monday that he’s not certain what action he’ll take on the bill: to veto the measure or sign it into law.

“I understand that they reached a compromise that some of the brewers are more happy with, but I understand some people are still not. We’re going to take a look at it when it comes to our desk and see what exactly the wording is,” Hogan said.

The governor said he supports the industry and earlier this year signed a proclamation declaring the month of February as FeBREWary in celebration of Maryland Craft Beer Lovers Month.

“We’ve been trying to support the industry,” Hogan said. “I’ve been touring these breweries all across the state and supporting them as much as we can. We want to try to help them grow. They’re great for the state: breweries, distilleries and wineries.”

House Bill 1283 applies to the 30 licensed Class 5 breweries in Maryland, including half a dozen in Frederick County: Smoketown Brewing Station, Flying Dog Brewery, Monocacy Brewing, Olde Mother Brewing Co., Rockwell Brewery and Steinhardt Brewing Co. Breweries such as farm breweries and microbreweries are not affected by the legislation.

In total, there are about five dozen beer manufacturers licensed in the state when microbreweries, farm breweries and brewpubs are included.

Editor’s note: This story was corrected to show that Maryland Comptroller Peter Franchot announced Tuesday that his office will launch a task force to examine the state’s beer laws, not the state.

ANNAPOLIS — As the General Assembly’s 2017 session wrapped up Monday, Maryland lawmakers were the first in the country to pass legislation in …

27. Seek out the most unique foods in Frederick