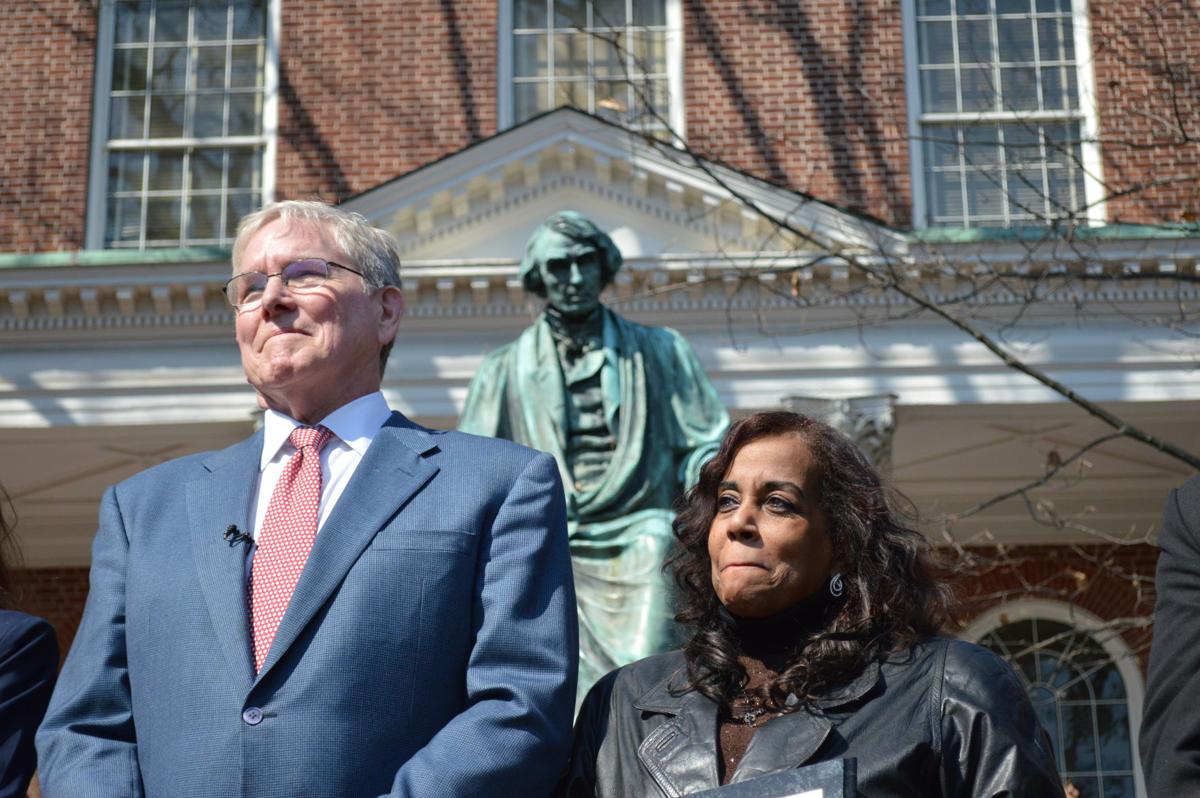 Charles Taney IV, of Connecticut, and Lynne Jackson, of Missouri, stand in front of a statue of Roger Brooke Taney on Monday during a reconciliation ceremony on the State House grounds in Annapolis. 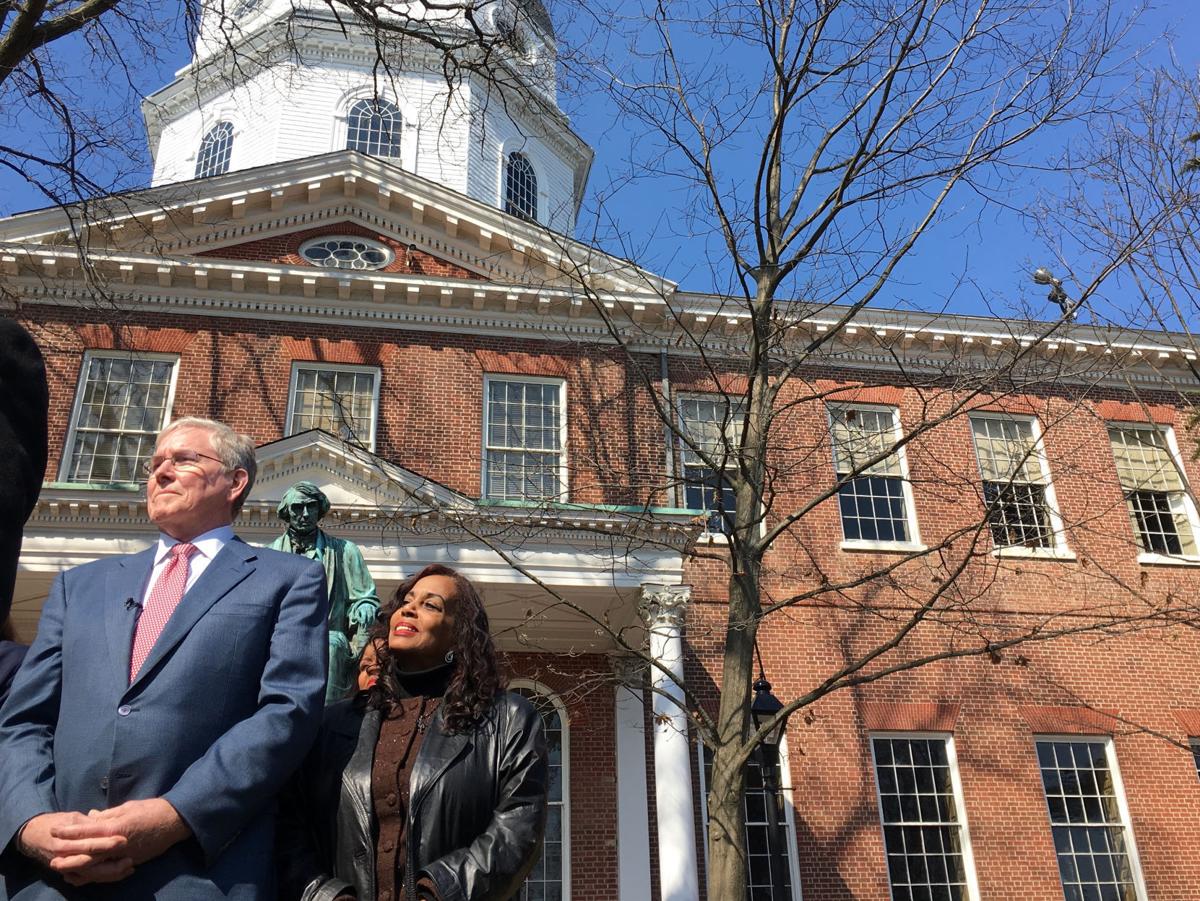 Charles Taney IV, of Connecticut, and Lynne Jackson, of Missouri, stand in front of a statue of Roger Brooke Taney during a reconciliation ceremony on the State House grounds in Annapolis on Monday. Taney is the great-great-great nephew of the Supreme Court justice, who issued the opinion which concluded that Dred Scott — Jackson's great-great grandfather — could not sue for his freedom because people of African descent were not U.S. citizens.

Charles Taney IV, of Connecticut, and Lynne Jackson, of Missouri, stand in front of a statue of Roger Brooke Taney on Monday during a reconciliation ceremony on the State House grounds in Annapolis.

Charles Taney IV, of Connecticut, and Lynne Jackson, of Missouri, stand in front of a statue of Roger Brooke Taney during a reconciliation ceremony on the State House grounds in Annapolis on Monday. Taney is the great-great-great nephew of the Supreme Court justice, who issued the opinion which concluded that Dred Scott — Jackson's great-great grandfather — could not sue for his freedom because people of African descent were not U.S. citizens.

ANNAPOLIS — In the shadow of the State House, two families joined by history shared their story of reconciliation Monday morning.

“We were coming from the same place. We were being as open and loving as we can be and they were being the same with us,” said Charles Taney IV, a descendant of Augustus Taney, the brother of Roger Brooke Taney. “It’s become a wonderful relationship with our two families. We share a sorry past, but we have hope for a bright future.”

The historical Taney is most widely known for issuing the majority opinion in Dred Scott v. Sanford on March 6, 1857. The opinion concluded that black people were not U.S. citizens and therefore Scott had no right to sue for his freedom. The opinion also said that Congress could not outlaw slavery in the territories, and inflamed sentiments in the lead-up to the Civil War.

Lynne Jackson said she’d looked forward to a meeting of the two families ever since she created The Dred Scott Heritage Foundation in honor of her great-great-grandfather 10 years ago, on the 150th anniversary of the Supreme Court decision.

Monday marked the 160th anniversary of the decision issued by Taney, who started his law career in Frederick in 1801 and lived in the city until 1823.

Gathered in front of a now-green bronze statute of Taney, the families laid out their hopes for racial harmony and justice in America — and what they think should be done with the 83,000-pound statue.

Monday’s meeting on the anniversary of the decision that shaped decades of race relations in America came after a friendship between the Scotts and Taneys was forged through the theater.

In 2016, Kate Taney Billingsley, Charles’ daughter, wrote a one-act play called “A Man of His Time,” which centered on an emotional meeting of the descendants of Scott and Taney set in today’s time.

She said the play stemmed from family discussions about issuing a formal apology and “years and years of this stewing inside of me.”

The Actors Studio in New York City, which produced the play, invited Jackson, who lives in St. Louis, and Charles Taney, who lives in Connecticut, to participate in a talk-back session with the audience after the play.

Jackson said she was shocked when she received the email. She’d previously thought it might take years to meet and then build up to a public reconciliation with the Taney family.

“I didn’t have to do any of that,” she said. “They’d already plowed the ground.”

In the months since meeting at the play, Charles Taney — who works as a nonprofit consultant — volunteered to help The Dred Scott Heritage Foundation write a strategic vision.

In December, Jackson invited Taney to a daylong Dred Scott Sons & Daughters of Reconciliation conference in Missouri, where the families first participated in a public reconciliation.

It was a prelude to Monday’s ceremony.

“Today, for all the Taneys ... we offer our apology to the Scott family and all African-Americans for the injury caused by Roger Brooke Taney and this decision,” Charles Taney said.

Jackson said she hopes the discussion between the families inspires others to come together.

“They are so sincerely willing to be out here. And I just commend them for that because a lot of people would just say, ‘I don’t think I want to go out there and do that,’ especially in the climate that we’re in,” Jackson said. “But that’s exactly why we need to be out here. If the Taneys and the Scotts can be reconciled, why can’t anybody else?”

The statue of Taney by the artist William Henry Rinehart sits atop a granite pedestal directly outside the original front door of the State House and was added to the grounds on Dec. 11, 1872.

Taney was born in 1777 and grew up in Calvert County. He was nominated to the Supreme Court by President Andrew Jackson in 1835 and the next year, filled the seat vacated by Chief Justice John Marshall. He died in 1864.

The prominent position of the statue has sparked debate around the State House for decades.

A much more extensive memorial for Thurgood Marshall — also a Maryland native and the first African-American justice of the Supreme Court — was erected on Lawyers’ Mall in the mid-1990s, during another period of debate about the Taney statue.

Nevertheless, the Taney and Scott families said Monday they support a proposal to reorient the statue of Roger Brooke Taney to stand in a position of dialogue with new statues of Dred Scott and Frederick Douglass, along with an educational display on the Dred Scott decision and its aftermath.

Both families said they are committed to helping to raise money for the cause.

Other efforts have been made to change the scenery in the area around the Taney statue at the State House in recent years.

There are no pending bills this year, but the debate over Taney’s presence in other parts of the state continues.

After a number of hearings, the city of Frederick’s Board of Aldermen voted in October to move busts of Taney and Gov. Thomas Johnson — the first governor of Maryland and a slave owner — from City Hall to Mount Olivet Cemetery.

While the city said earlier this month that moving the busts was going forward, another member of the Taney family said he hopes discussion of alternatives can continue.

Chris Taney, of Monrovia, said he thinks the city should consider adding to the City Hall plaza, rather than taking away from it.

“I think that the idea is overly simplistic in simply removing a statue because a statue is a reflection of history,” he said. “By removing it, it doesn’t change our history, it just removes the statue.”

Chris Taney was pleased to be on hand for Monday’s ceremony.

“I think it’s deeply important that we all have a conversation with each other,” he said.

stop trying to hide history. leave it up, educate people on the history of it.

These are the character of Americans we need to heal and help America to reach her full potential. I'm encouraged to watch Americans stepping up and engaging in racial reconciliation instead of protesting, rioting and supporting extremist divisive politicians who make a comfortable living off racial division in America.

Do what you want with the statues, I am done with that discussion. History fascinates me, it is not the statues, wherever they go, history remains with us. Looking at ancestry, in upstate New York, I was surprised to find slaves were not included in the census. Surprised, because many of the Abolitionists came from this general area. In fact, John Brown came from Ox Bow, near Lake Placid.

In my home county, there were caves, basements and other places runaway slaves were hidden on their way to Canada and freedom.

My family used to own a dog boarding kennel over in Carroll County. The main/original part of the house was built in 1724. There is a false wall that conceals a closet sized hiding place that was used as part of the Underground Railroad.

My feeling about the statues themselves is different. I think it's important to keep them in place as an 'in your face' reminder of history. History buffs may not need a reminder, but most people do. This applies in other countries like Germany, Russia, Italy, and Japan as well.