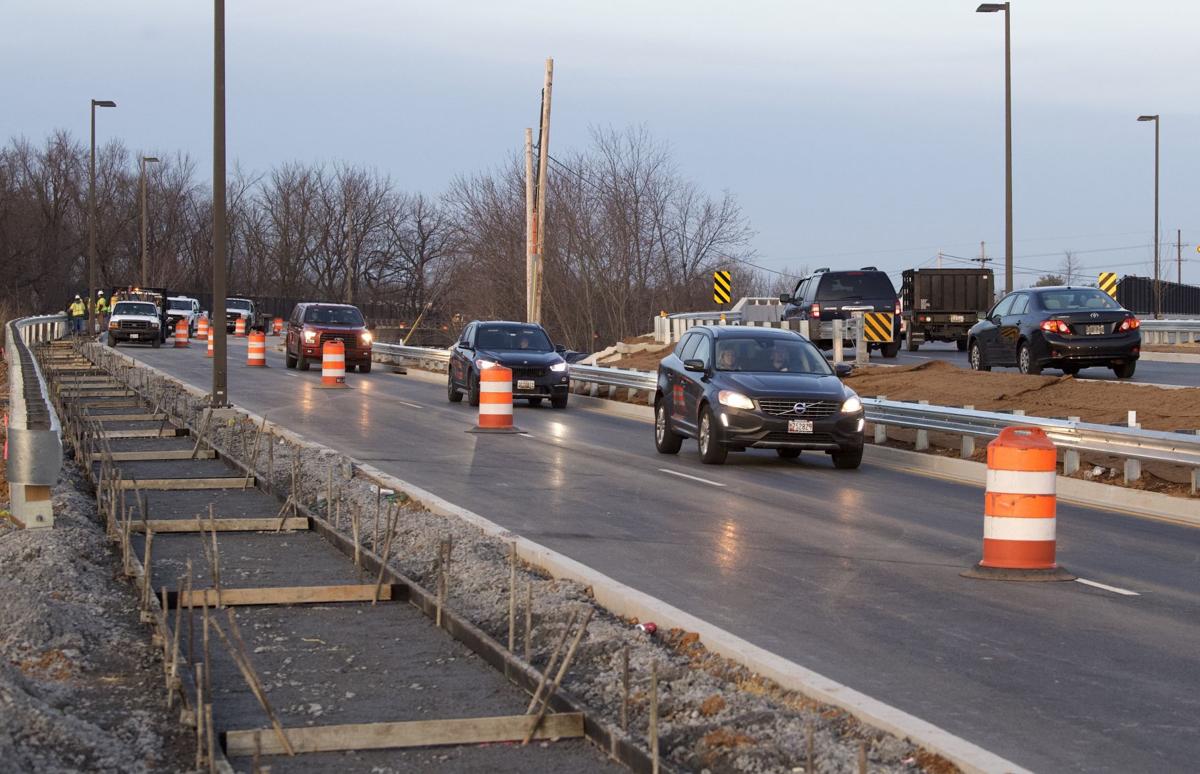 Motorists travel in both directions across the Monocacy Blvd. bridge over the Monocacy river late Thursday afternoon. A ribbon cutting was held in the morning on a nearby access road but the roadway did not open till afternoon. 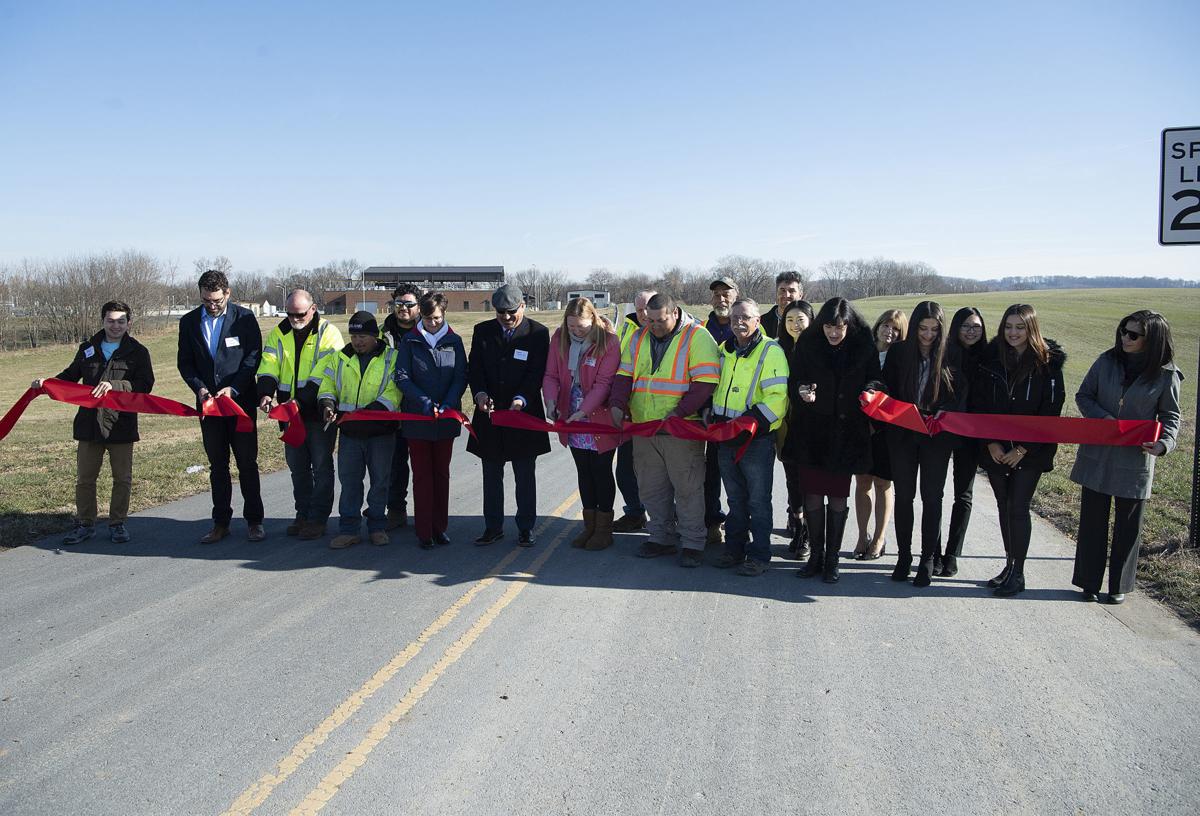 Milani Construction employees and two administrative assistants for Frederick County Council members cut a ribbon on a access road to the Frederick Water Treatment Center off Monocacy Boulevard at 10 a.m. Thursday. The bridges carrying Monocacy Boulevard traffic did not open until later in the day.

After months of delays, even Thursday’s ribbon-cutting for the long-awaited bridge over the Monocacy River in Frederick didn’t go quite as planned.

Employees from Milani Construction gathered to mark the official opening of the two bridges over the Monocacy River on Monocacy Boulevard, which should have ended the long-awaited project that has snarled traffic on the city’s east side for more than two years.

Nearby, crews continued to work on one of the bridges, in the hopes of having it open to traffic by the afternoon.

So rather than holding Thursday’s ribbon-cutting at Monocacy Boulevard, Schifferstadt Boulevard and East Church Street, it took place on the private access road to the city’s water treatment plant, down Monocacy Boulevard from the intersection leading to the bridge.

The bridge was waiting for some striping to be put down before it could open, which was held up by the recent cold weather, said Milani’s Filitsa Katsani.

The city announced the bridge’s opening at 2:30 p.m. Thursday.

Company President Saeed Milani hailed the work of his crews on the project who faced “many, many challenges,” as they celebrated the project’s substantial completion.

The city’s focus was on getting the road open, she said.

The section of Monocacy Boulevard was closed in October 2017, and was originally expected to be reopened in April.

It included building a second bridge adjacent to the old one across the Monocacy, widening about 3,550 feet of the road to a four-lane arterial road and adding a new traffic signal at Monocacy Boulevard and Gas House Pike, along with new bike and pedestrian paths and other amenities. Both bridges are now operational, each carrying traffic in one direction across the river.

But a variety of complications began to arise almost as soon as the project began, leading to disagreements between Milani and the city about the delays.

On Wednesday, Milani sent out an invitation to Thursday’s ribbon-cutting that placed the blame for delays on the city’s planning and engineering staff and condemned “opportunistic political blaming and finger pointing” about the project.

In a statement, Frederick Mayor Michael O’Connor said the city “greatly disputes the assertions” in the Milani statement.

In a construction trailer where Milani staff and others waited for the start of Thursday’s ceremony, a large poster documented 83 claimed problems that arose over the course of the project.

It’s hard to finish a job “when you have issues everywhere,” said Joe Trapani, Milani’s area manager for the project.

The city and company used to have progress meetings to discuss the project, at which the city took minutes and would post them online, Trapani said.

But they found that the minutes included only the city’s points, and when Milani asked to have their perspective included, the city refused, Trapani said.

Eventually, there were no more meetings.

Waters said Thursday that the city would not respond to Milani comments, except to say that they “completely dispute” all of them.

Trapani also said Thursday that the company had offered the city mediation to resolve disputes over the process, but the city refused.

The mediation offer would have required the city to give up certain guarantees that were included in the contract for the project.

“We are still open to mediation,” Waters said in a statement Thursday. “However, we will not go into mediation if it requires us to forfeit the rights in our existing contract.”

Trapani said “there’s always hope” that the two sides can still mediate their differences, and Milani has no strong interest in going to court over the project.

On eve of Monocacy bridge opening, city and contractor spar over delay

This whole project was a disaster for sure over budget, excessive delays, etc. As tax paying citizens one would think the elected officials would at least get to the bottom of the problems and inform the citizens. Time to vote them out just another example of the administration's incompetency

another bot for Blaine, Boover 88 speaks!

Milani also is doing the work in Middletown. What are their excuses for how long that project is taking?

I'm sure it's [exclusively] the town's fault. /s

Crimini - is that still going on? I left Middletown in 2002 and work was starting then, and you're telling me it's not over yet? Or is this new work?

You have no knowledge on the engineering involved with a bridge. And you have never worked with the type of engineers involved.

That, and have you ever

So wait - no elected city or county officials attended the ceremony and instead sent administrative assistants? Cowards!

Not only that, but they cut the ribbon on the access road to the sewage treatment plant that dumps raw sewage into the river after a heavy rain. It does seem fitting somehow though!

No. It's a statement. They're at odds.

So from that picture, the bridge still does not look ready. I think this may be a forced opening of a bridge that work will still be happening on for months.

Any investigative reporter or or paper, representing the people of this city would have gotten the true skinny on what the real problems with this project we're.

The fact that the Frederick News Post only reported on press releases and official statements is sad. Our city paper sources from social media sites accessible to anyone.

Forget about local news being investigative. They can't afford it anymore.

Look how long it took to get a follow up report on the cactus flats murder. The FNP spent all that energy writing about the murder when it happened. Big day. Then, crickets. I had to make mention of it in every one of my posts to get the FNP to get off their tails

Good point, but many, if not all of the critics commenting here base their opinions on FNP reporting. I'm just thankful the road is finally hopen.

Only posting minutes from one side(the city)? Those aren't minutes. Those are personal notes. If that is true, it adds a new dimension that we, as readers, were not aware of through the stories in the FNP. Will the contractor make those records public?

inexcusable! Someone being awfully immature if what is written is true.

"On Wednesday, Milani sent out an invitation to Thursday's ribbon-cutting that placed the blame for delays on the city's planning and engineering staff....." So, in their invitation to the City to attend the useless ribbon cutting ceremony, Milani blamed the City for the delays? I'd like to see that invitation.

If anyone else wants to know where this picture was taken, use this link: https://goo.gl/maps/AGdig4F1g8gMmE978

Make room for the "Boo Birds."

We came by about 1:00 p.m. for our maiden voyage but the Schifferstadt end was still blocked off with DPW trucks and about 20 workers sweeping the sidewalks and cleaning up the dirt still in the street.

I’m not 100%. But I could have sworn that I read in the FNP a couple weeks ago that there would still be work left to do after the road was open.