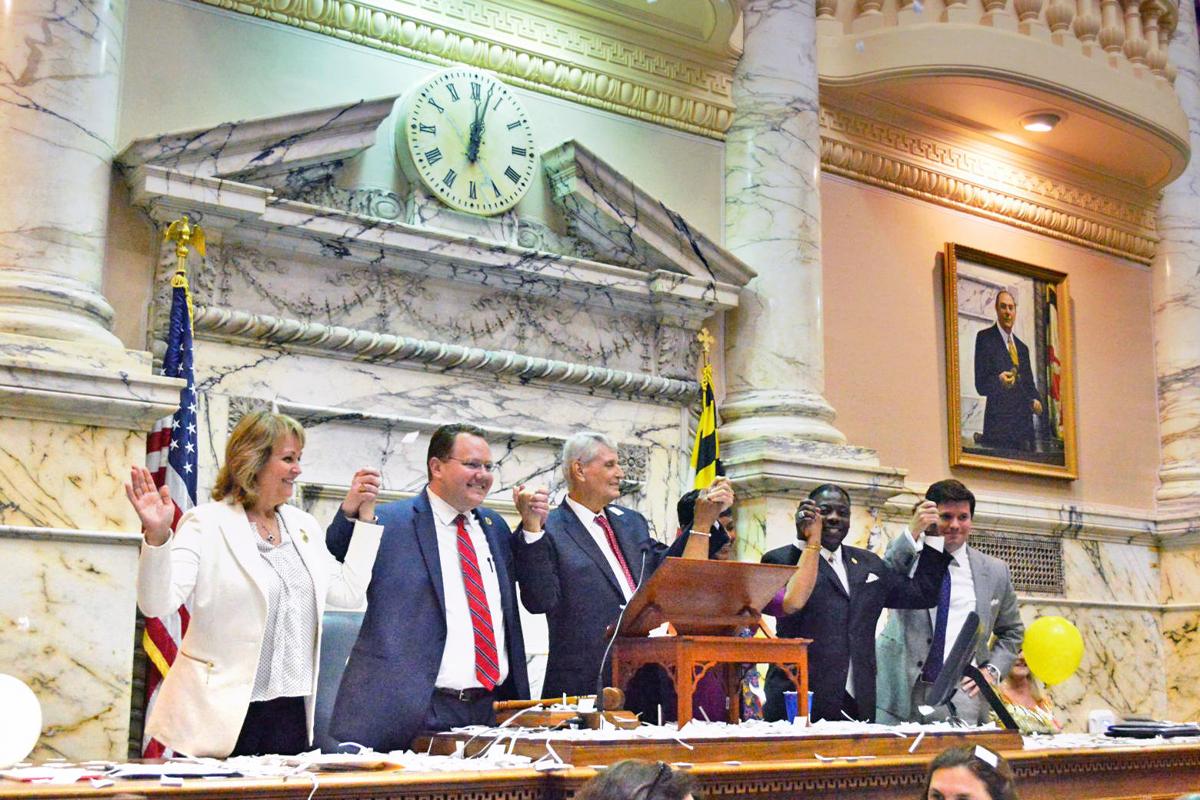 Maryland’s Speaker of the House Michael Busch and Speaker Pro Tem Adrienne Jones, center, hold hands with the minority and majority leaders and whips on either side in the House of Delegates moments after the General Assembly adjourned for the year. 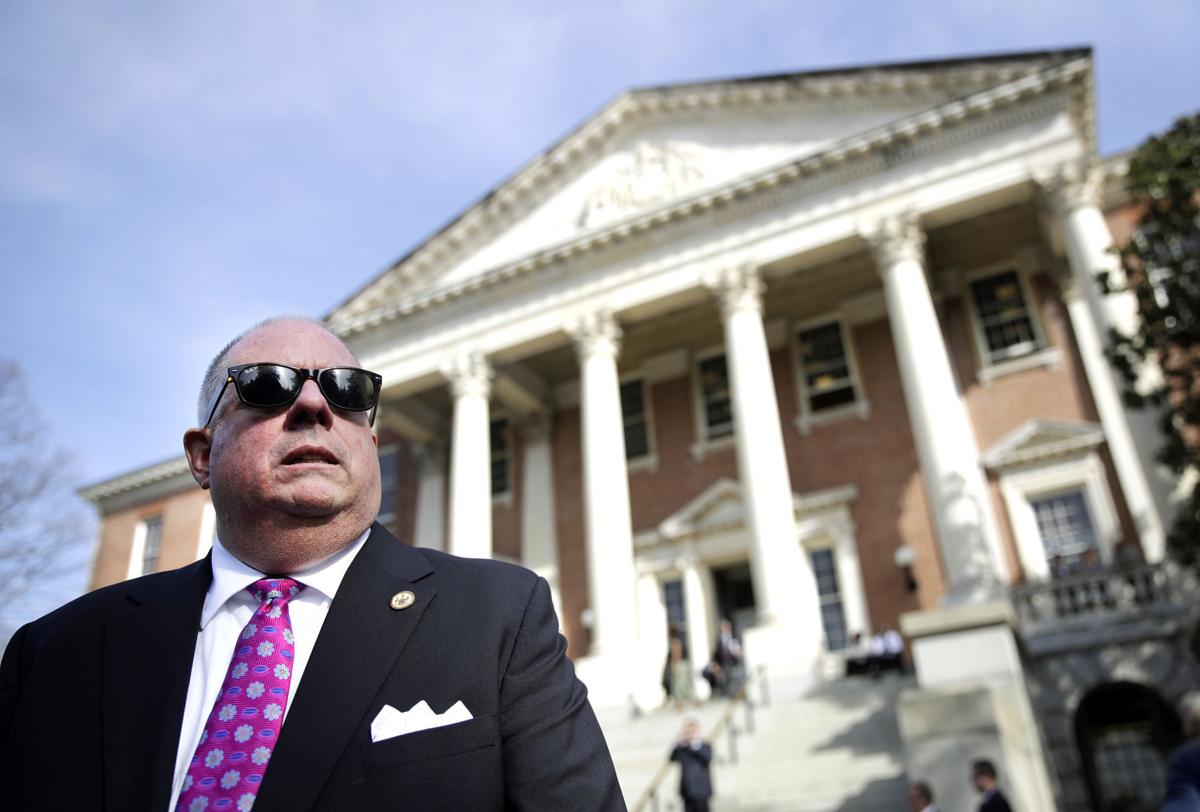 Maryland Gov. Larry Hogan speaks at a news conference Monday outside the Maryland State House on the final day of the state's legislative session in Annapolis.

Maryland’s Speaker of the House Michael Busch and Speaker Pro Tem Adrienne Jones, center, hold hands with the minority and majority leaders and whips on either side in the House of Delegates moments after the General Assembly adjourned for the year.

Maryland Gov. Larry Hogan speaks at a news conference Monday outside the Maryland State House on the final day of the state's legislative session in Annapolis.

ANNAPOLIS — As the General Assembly’s 2017 session wrapped up Monday, Maryland lawmakers were the first in the country to pass legislation in certain areas.

The General Assembly earlier this session was the first state Legislature to pass a law that would direct state funding to Planned Parenthood if federal funding for the program is cut.

While that bill and others were viewed — by Republicans and Democrats alike — as responses to the federal government under President Donald Trump, others in the same vein fell short.

A late-filed bill that sought to create state-level protections for personal information on the internet — after Trump rolled back an Obama-era executive order last week — failed in a House committee Monday afternoon.

The remnants of a so-called “Trust Act,” which aimed to incorporate immigration “sanctuary” policies into state law, were rolled into a different Senate bill late Friday afternoon, only to die on the chamber’s floor Monday.

The policy was lauded by members of the Senate Judicial Proceedings Committee as a compromise measure that codified Supreme Court protections for immigrants by specifying that police in the state should not ask about a person’s immigration status, citizenship status or place of birth prior to arrest.

But Democratic supporters of the bill said it did little to change the status quo. They were especially disappointed that the committee didn’t move provisions to limit collaboration by local jails to ensure that defendants would not be held on federal immigration detainers longer than typical.

Lawmakers sent almost 950 bills to Gov. Larry Hogan’s desk this year. A handful already have been signed into law. Some will be signed in an official ceremony Tuesday.

Others face an uncertain future.

Hogan, a Republican, has called a bill to provide paid sick leave for workers at businesses with 15 or more employees with five paid sick days a year “job-killing” in the past. While the governor proposed his own version of paid sick leave legislation, Democrats rallied around the version that passed.

“We’re certainly going to take a look at it. It’s different than the bill that we submitted, but I haven’t seen the details,” Hogan said Monday when asked about a possible veto. “We’ll take a look at it when it comes to my desk.”

Another bill headed for the governor’s desk is a transportation project scoring law that has a twisted legislative history: it was passed by the General Assembly last year, vetoed, then overridden and finally targeted for repeal by Hogan this year.

After a tense back-and-forth during the day, a measure that would have extended medical cannabis licenses to two businesses that scored well but were passed over in the state’s first round of growers licenses failed to pass in the final seconds on the House floor.

One of the businesses that would have benefitted was Green Thumb Industries, known as GTI Maryland, which sought a license to grow in Frederick’s senatorial districts 3 and 4.

On Saturday, lawmakers rallied around a bill that expands the barrel limit for taprooms at Class 5 breweries — such as Flying Dog and Attaboy Beer in Frederick — but restricts operating hours for new brewery taprooms and imposes other restrictions. Regarded as imperfect by craft beer industry supporters, the bill passed the General Assembly by a wide bipartisan margin and paves the way for Guinness to open a large brewery and taproom in Baltimore County.

“I understand that they reached a compromise that some of the brewers are more happy with, but I understand some people are still not,” Hogan said Monday afternoon. “We’re going to take a look at it when it comes our desk and see what exactly the wording is.”

Frederick County lawmakers saw some success this session, as well. Democrats pushed for and saw $16 million in state grant funding allocated in the capital budget for a proposed downtown hotel and conference center opposed by Republican members of the county delegation.

Several bills that loosen the county’s liquor laws — including a mimosa measure that allows Sunday alcohol sales to start an hour earlier, at 10 a.m., for brunch service — were passed last week.

The most significant local bills originally sought by county lawmakers were mired in delegation-level partisan turmoil.

A bill that would have given the Frederick County Board of Education’s student member limited voting rights got majority support from that body after years of debate, but was opposed by Republican delegation members in Annapolis. A bill introduced by Democratic lawmakers in protest failed to pass out of committee in either chamber.

The General Assembly passed a bill that opponents say restricts the growth of breweries in Maryland, but Frederick’s brewers aren’t drowning t…

How many of the legislators even read the bills they passed? 90 day session and 950 bills? What is left to legislate? How many breaths I'm allowed to take each day?

glad to see sanctuary state is DEAD and the same should happen to the taxpayer gouging to enrich the Plamondons and Randalls hotel boondoggle ...how shameful ...ditto planned parenthood...if one wishes to terminate an unborn child, one should not ask others to pay for it

The DEM-controlled legislature apparently believes theres a program for everything. Would prefer quality over quantity any day. We need a return to two-party politics in Maryland, starting with REPLACEMENT of Ron Young and Carol Young with representatives that represent Frederick values.

Most politicians prefer that you get their names right. Helps with name recognition. You're probably referring to Karen Lewis Young.

Unlike the article yesterday about the pharmaceutical prices, this gives more information. Price gouging over generic drugs? Generic drugs are already cheap. What is this legislation going to improve anything. The real issue are the very high prices for brand name drugs that have no equivalent and/or have not gone to a generic version (based on law).

And why is the legislation still on the table for the hotel and conference center? I can't believe that the majority of Marylanders support this, let alone Frederick County/City residents. It's outrageous on so many aspects, as we have commented previously.

The majority of Marylanders DO NOT support this. It was shammed into a package. Snuck in. Nothing but a dirty, greedy, piggy, sham.