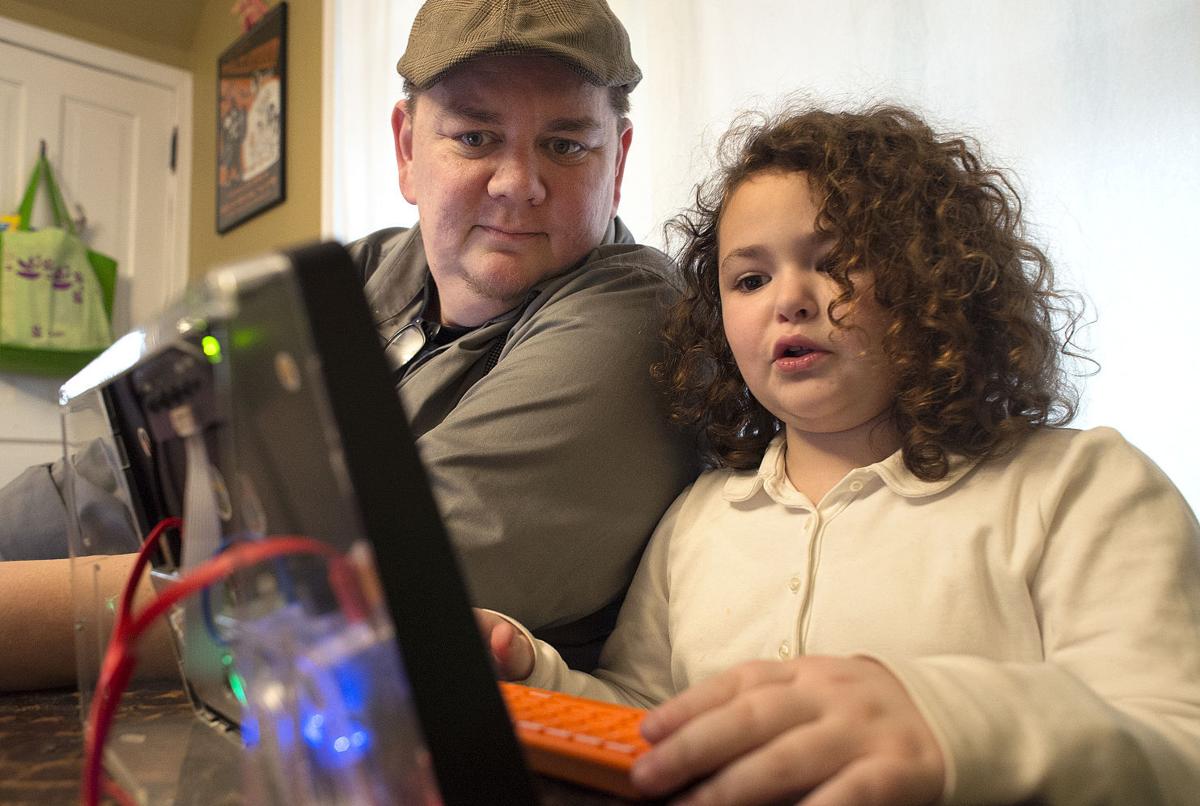 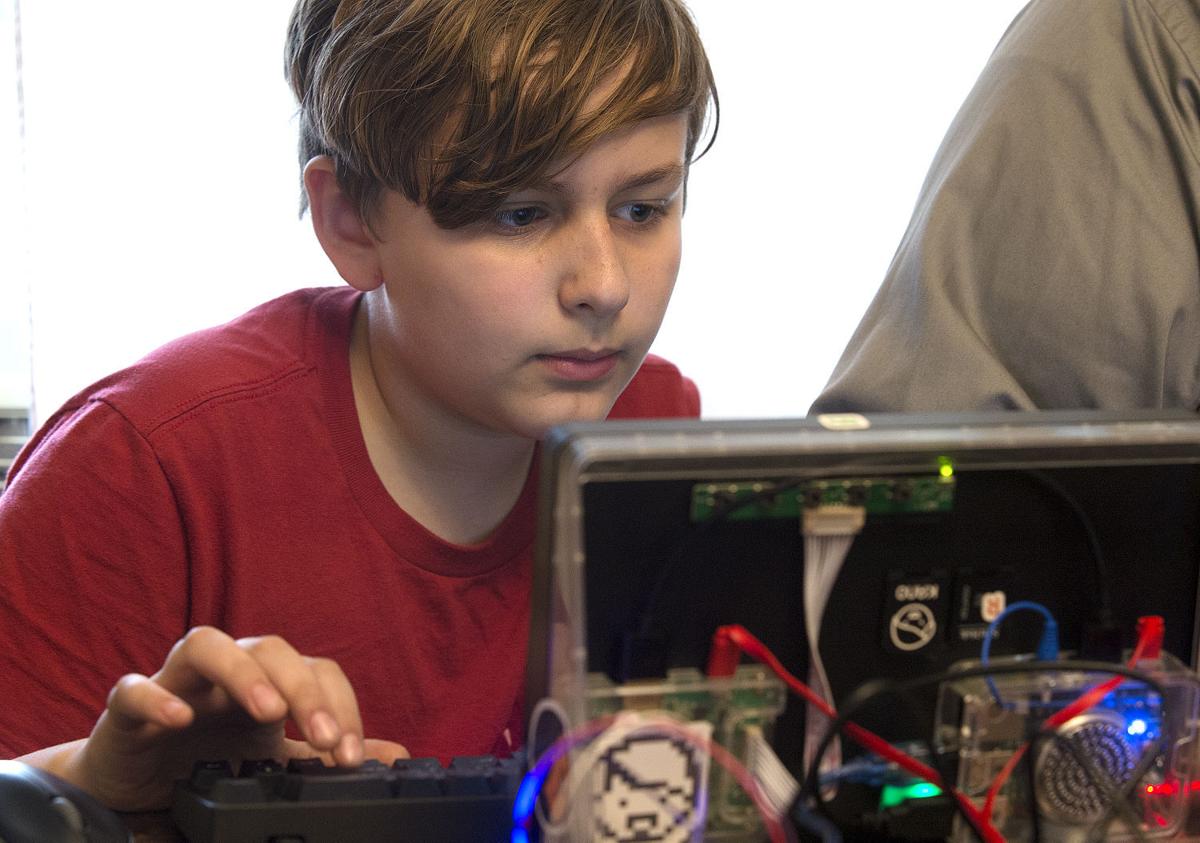 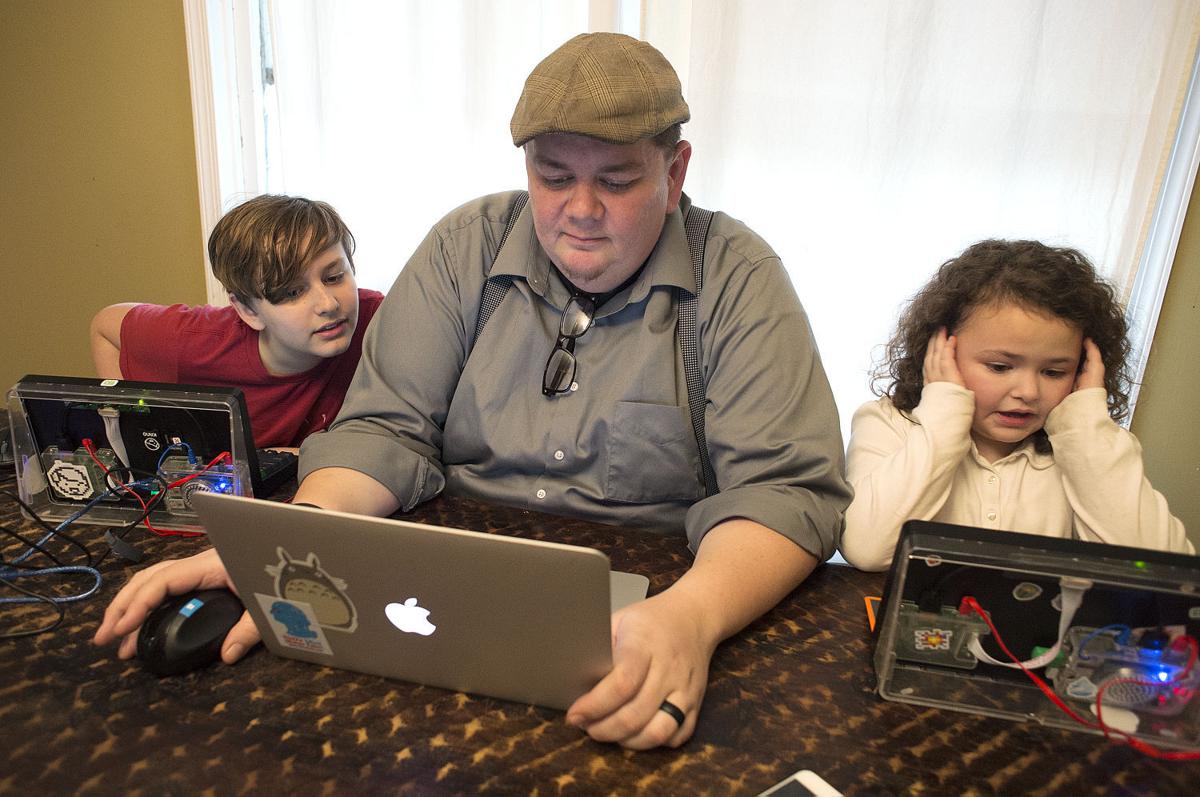 The future for Brunswick youngsters and adults brings joy to Christopher Vigliotti’s eyes when he talks about giving them a boost toward the gold ring of computer science training.

He said the inspiration for his ongoing project, Computer Science For All Pilot Program, developed when he saw how quickly his two children took an interest in the educational Raspberry Pi computer kit each received at Christmas.

Vigliotti makes his living writing software. He hoped, but didn’t expect, that his children — Domenico Vigliotti, 10, and Annabella Cook, 9 — would want to learn to use a computer to express themselves.

“It seems like this deeply foreign … thing,” he said. “There is actually this warm and human side to it.”

In the months since Christmas, the children have created new games and written code to alter virtual worlds in the game Minecraft, and to build practical devices powered by their computers.

“I want to show you something I just made with HTML,” Annabella said. She explained that HTML stands for “HyperText Markup Language.” She wrote sequences of code to instruct the device to perform specific functions.

Domenico built a circuit to cause lights to blink in a specific sequence, and he’s making an “On Air” light for outside his door, to alert the family when he is recording videos.

Seeing their success with the Raspberry Pi kits made Vigliotti think of the less fortunate young people in Brunswick without access to that kind of technology. As he explained his pilot program to the Brunswick City Council recently, he turned to Annabella and asked if it is OK that some children cannot afford such technology.

“No,” she told the council forcefully.

After 13 years in Brunswick, Vigliotti said, he has “lived here long enough to see some [kids] have it really rough; some are living meal to meal.”

He said technological skill could be their ticket to financial security.

“I think we can do more to … give these kids hope. Brunswick needs hackers,” he told the council, with a smile. “I know that sounds controversial.”

Later, he explained that hackers don’t necessarily do harm. They understand how to navigate the inner workings of the cyber world and are able to find the hackers who are up to no good.

“We’re not promoting destruction,” Vigliotti said, as his children clicked away on keyboards.

Vigliotti founded Brunswick Hackerspace to offer his low-cost computer program one day a month for several months. Participants will learn to write computer code and have fun doing it.

“It’s essentially a scaling up of what we did in the dining room,” Vigliotti said.

His pilot program filled up with 28 participants, all 10 to 12 years old, soon after he announced it. Everyone will use a $150 Raspberry Pi kit, which includes a hard drive, monitor, keyboard and wireless access device. Donations have helped some who could not afford to buy the kit.

Participants keep the kits after the program.

Vigliotti intends to establish a formal nonprofit, expand the program and move to a larger space. The group has to make do in the free space beneath Grace Episcopal Church for now, and he is grateful for the Rev. Anjel Scarborough’s willingness to participate.

“We’re just delighted to have the opportunity to host this,” Scarborough said in a telephone interview.

She worked in computer technology before her ordination. She said Brunswick could use an opportunity like this to develop skills that lay a foundation for employment in any sector. She recommended computer training as a way to learn logical thinking and practical skills.

“Learning to be a learner,” she said. “And that just applies to so many other places.”

“It’s another way that Grace Church is reaching into the community,” Scarborough said.

The organization will offer future classes to “anyone willing to get on board with technology education,” Vigliotti told the city council March 8.

“Our mission is to bridge the digital divide … get a computer in front of everyone, to have and take home,” he told the council. “Give them training and show them that it’s fun.”

The kit “encourages kids to tinker and learn how to code and key in Unix commands,” Vigliotti said, referring to an operating system. He recognized that some of his technological talk might sound foreign to the public watching the council meeting.

“If you don’t understand what I’m saying, contact me,” he said cheerfully. “We’re going to make Brunswick a better place.”

Mayor Karin Tome supported the idea. “One more thing for our kids,” she said.

Vigliotti estimated that the country is going to have 1.4 million computer science jobs opening up in the next decade and only 400,000 Americans qualified to fill them. One challenge is getting more people comfortable with and better access to computers, he said.

For Brunswick, he envisions an upcoming generation of technical experts able to telecommute from home, as he does.

“I’m playing the long game here. My house is underwater,” he told the council with a laugh. “It’s all part of my evil plan to take over Brunswick.”

Know someone who would make a good Slice of Life? Email your suggestion to citydesk@newspost.com or call 301-662-1178 and ask for a city editor.

'Our mission is to bridge the digital divide, … get a computer in front of everyone, to have and take home. Give them training and show them that it's fun.'

Wonderful program and initiative! Thank you for seeing a need and stepping up to use your knowledge and expertise to make this happen!

Great job. Helping underprivileged youth, in any format, is always a noble aspiration best of luck for your success.