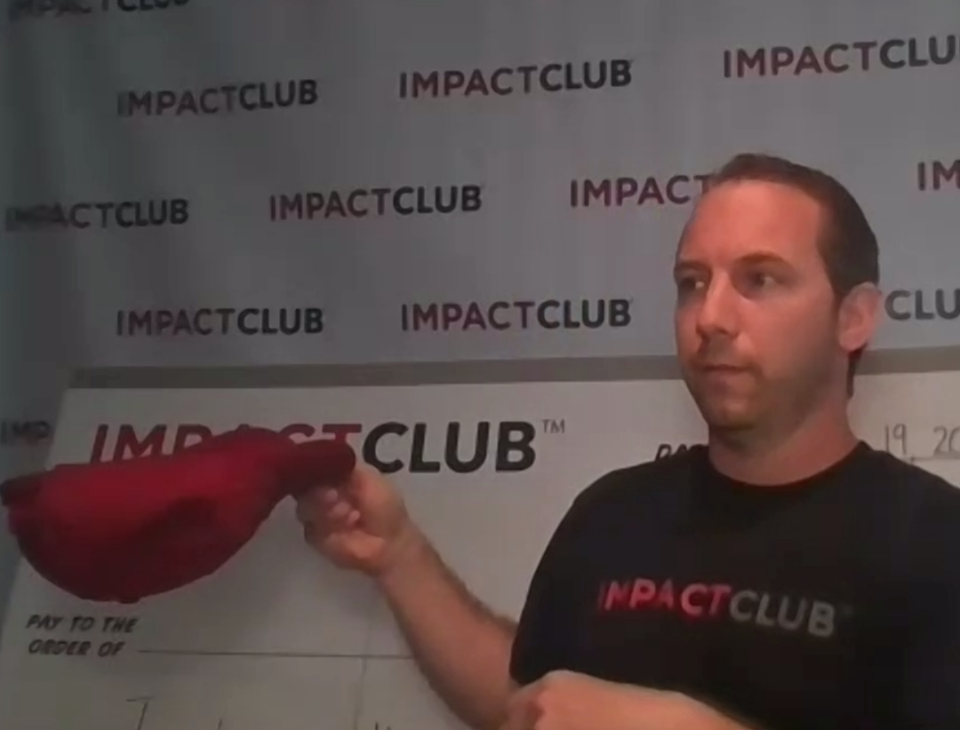 Impact Club co-founder Eric Verdi holds a hat with names of three nonprofits to randomly select which would present first for a chance to win $29,100 at the Impact Club’s May meeting. 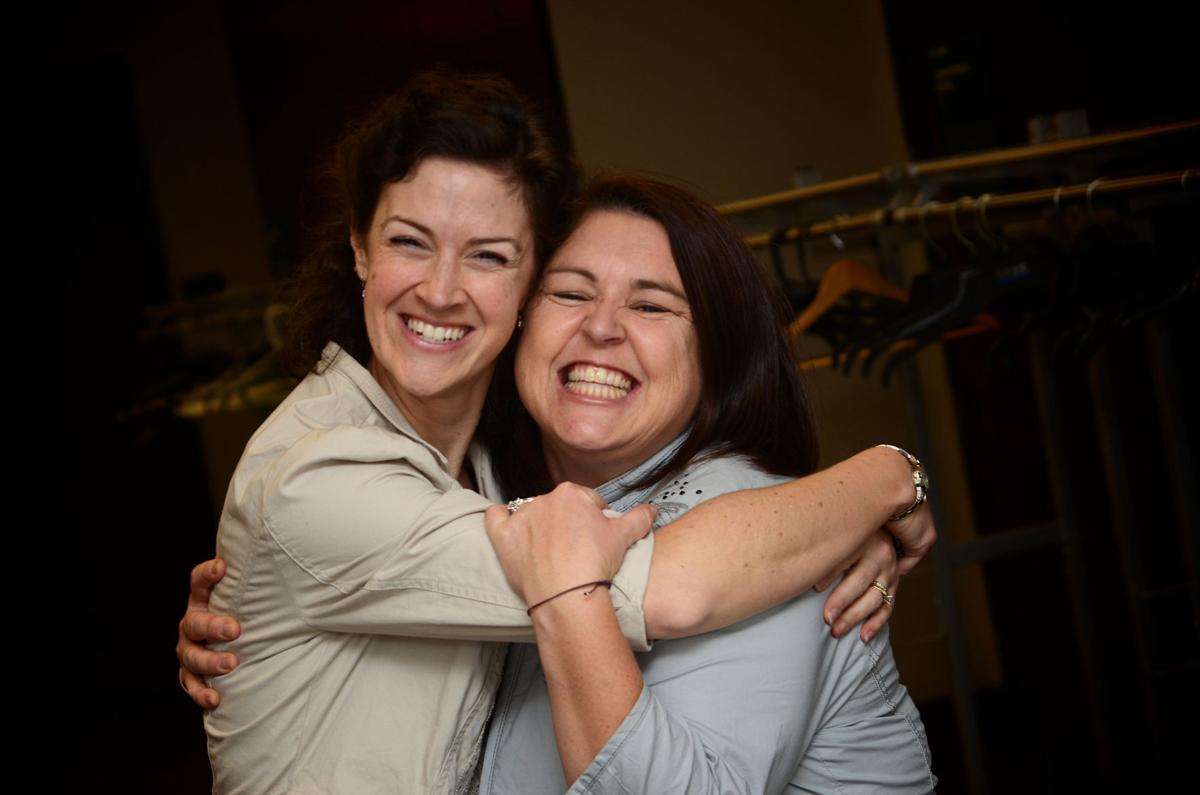 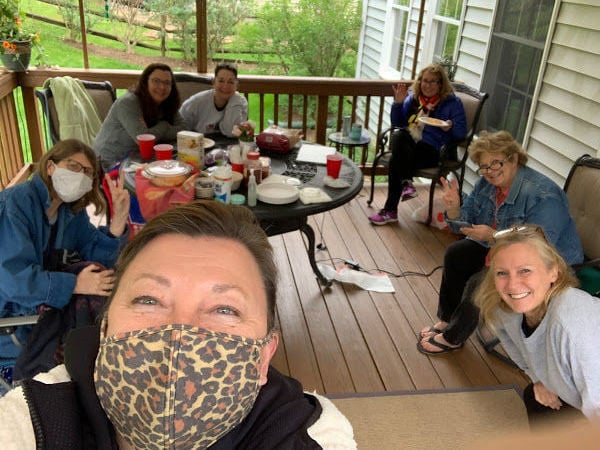 Members of Impact Club gathered for the group’s virtual meeting where they voted to donate $29,100 to Woman to Woman Mentoring this month. 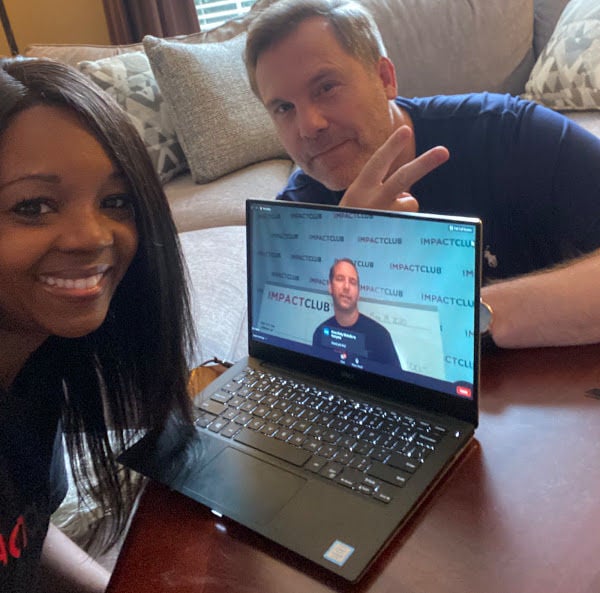 Frederick’s Impact held its quarterly meeting virtually this month, and the organization donated $29,100 to Woman to Woman Mentoring.

Impact Club co-founder Eric Verdi holds a hat with names of three nonprofits to randomly select which would present first for a chance to win $29,100 at the Impact Club’s May meeting.

Members of Impact Club gathered for the group’s virtual meeting where they voted to donate $29,100 to Woman to Woman Mentoring this month.

Frederick’s Impact held its quarterly meeting virtually this month, and the organization donated $29,100 to Woman to Woman Mentoring.

Tonya Hatosy-Stier sat back in her chair in front of her computer and placed her hand over her chest, choking back tears.

She knew the $29,100 her nonprofit Woman to Woman Mentoring just received was going to help a lot of young women.

“How do you not cry when something like this happens? It’s going to impact so many lives. There’s so much need,” she said to 100 members of Frederick’s Impact Club upon finding out she was the beneficiary of the organization’s quarterly donation. “I can’t believe you guys do this, it is just so amazing.”

A typical celebration of this kind of donation from the Impact Club might call for hugs all around — especially from Hatosy-Stier. But, in an era where COVID-19 has prevented all large gatherings from taking place, Hatosy-Stier was left to offer her thanks to the group from behind a computer screen.

The Impact Club, a national organization with local clubs across the U.S. that ask its members to donate $100 every three months, hosted its first virtual quarterly meeting May 19 using ZOOM, where 100 members heard presentations from three nonprofits — Woman to Woman Mentoring, the Animal Welfare League of Frederick County, and Community Living — and picked the winner.

It’s no secret the COVID-19 pandemic has decimated the economy. But it’s also taken a toll on nonprofit organizations, which typically operate on thin margins under normal conditions. And the lack of person-to-person interaction largely prevents them from fundraising the same way they typically would, which makes philanthropic organizations like the Impact Club, Ausherman Foundation and Delaplaine Foundation perhaps more crucial than ever.

“Impact Club is a remarkable example of people putting their beliefs into action, and coming together to build individual donations into major impact,” Hatosy-Stier said. “Frederick is certainly a community that gives. Even during tough times, like right now, it makes my heart happy to see the thoughtfulness and selflessness of our community.”

Eric Verdi, co-founder of Frederick’s Impact Club, said the thought of canceling the event never entered his mind — especially not in this environment.

Woman to Woman Mentoring creates connections and relationships with women, providing them mentors and services to help better their lives. They match about 100 women with mentors and provide them with life skills workshops — typically in-person but the organization has since moved them online to continue the services.

Along with an increased importance of local philanthropy, many nonprofits have gotten creative to raise money virtually — including Woman to Woman Mentoring. The group originally scheduled its largest fundraiser, a purse auction called “Clutch the Future,” for March 14 at Hood College. But the college closed its campus on March 11, meaning the group had 72 hours to turn their in-person event into a virtual one. They’ve had to put some other fundraising events outright on hold, Hatosy-Stier said.

Heartly House, a nonprofit that supports victims of intimate partner violence, moved its largest fundraiser, the annual “An Affair of the Heart,” online in May. The gala featured an interview with author/journalist Rachel Louise Snyder, who wrote “No Visible Bruises: What We Don’t Know About Domestic Violence Can Kill Us.” A survivor also shared her story. The gala, which typically raises $70,000, included a donate button on the registration page for people who wanted to give to the organization.

The Frederick Literacy Council typically hosts an annual Scrabble Mania event as its only fundraiser event each year.

The pandemic required them to take that fundraiser online where they hosted a virtual auction, which they usually do in person as well. Many sponsors and donors of the in-person event transferred their dollars into general donations anyway, said Rich Haney, president of the board of directors for the Literacy Council.

“Our sponsors and ticket holders have been so generous in converting their funds to a general donation,” Haney said. “In talking with other nonprofits in the community, I’m just so impressed with how this community has come out to support not only organizations like ours but our community’s small businesses as well.”

Frederick’s Impact Club is consistently among the highest, if not the highest, performing Impact Clubs in the country. At their next meeting, they’re likely to cross the $400,000 threshold of donations to local nonprofits.

Continuing that spirit of giving and having the club’s 14th event, even if it had to be virtual, was important for Verdi. And while the event lacked the same camaraderie it typically has when held at local establishments like Idiom Brewing and the former Blue Side Tavern, the rest of the event pretty much remained the same.

Even the dollar figures. Verdi hasn’t been able to recruit and grow the club’s membership during the pandemic, but even as millions have lost jobs and moved to the unemployment line, the membership has stayed steady for the club.

The club has lost less than one percent of its more than 300 members during the pandemic. Verdi even allows member to skip their quarterly $100 donation if needed, but said only 16 chose to do that this quarter.

“That shows me the members here know how big of a role their $100 plays in helping these charities,” Verdi said. “Their commitment to Impact Club was tremendous.”

LOL, the women in photo 3 are NOT in a virtual meeting. It looks like in-person to me, and not social distancing, either. Rules don't apply to them??