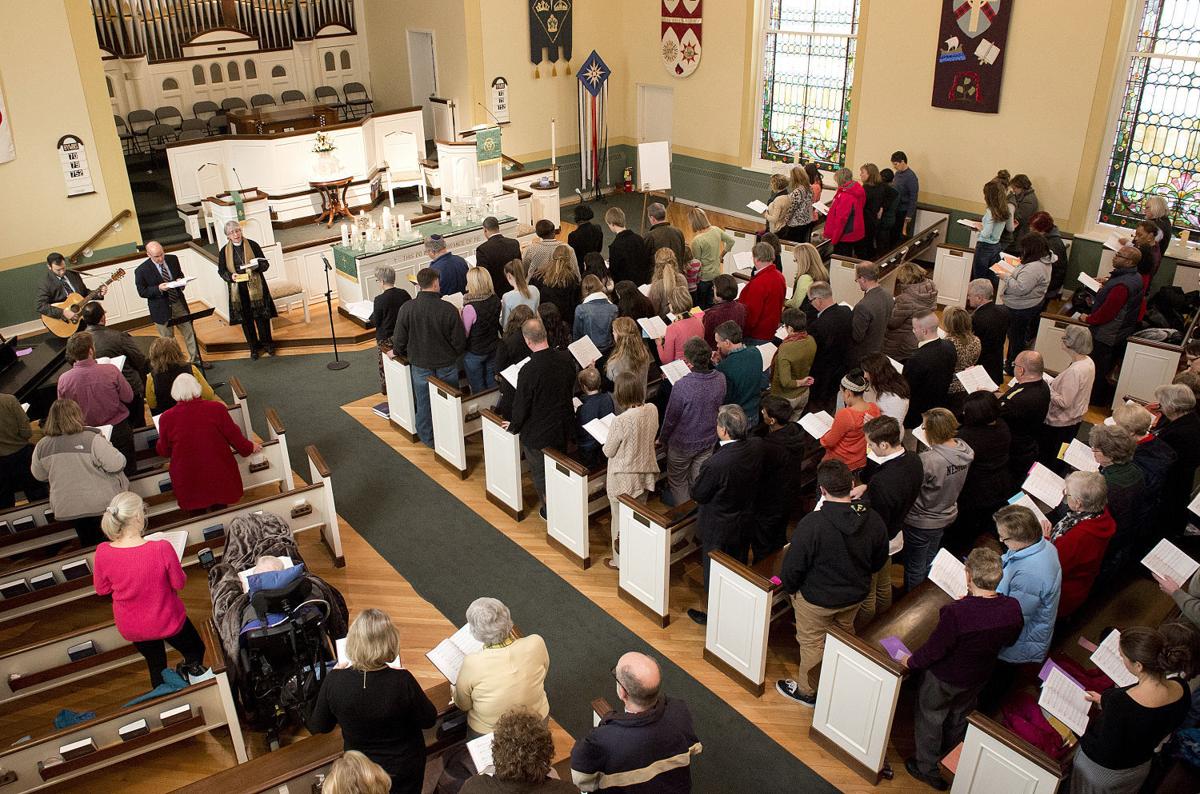 A large crowd fills Frederick Presbyterian Church on Sunday for a community prayer service in response to a recent shooting at Frederick High School. 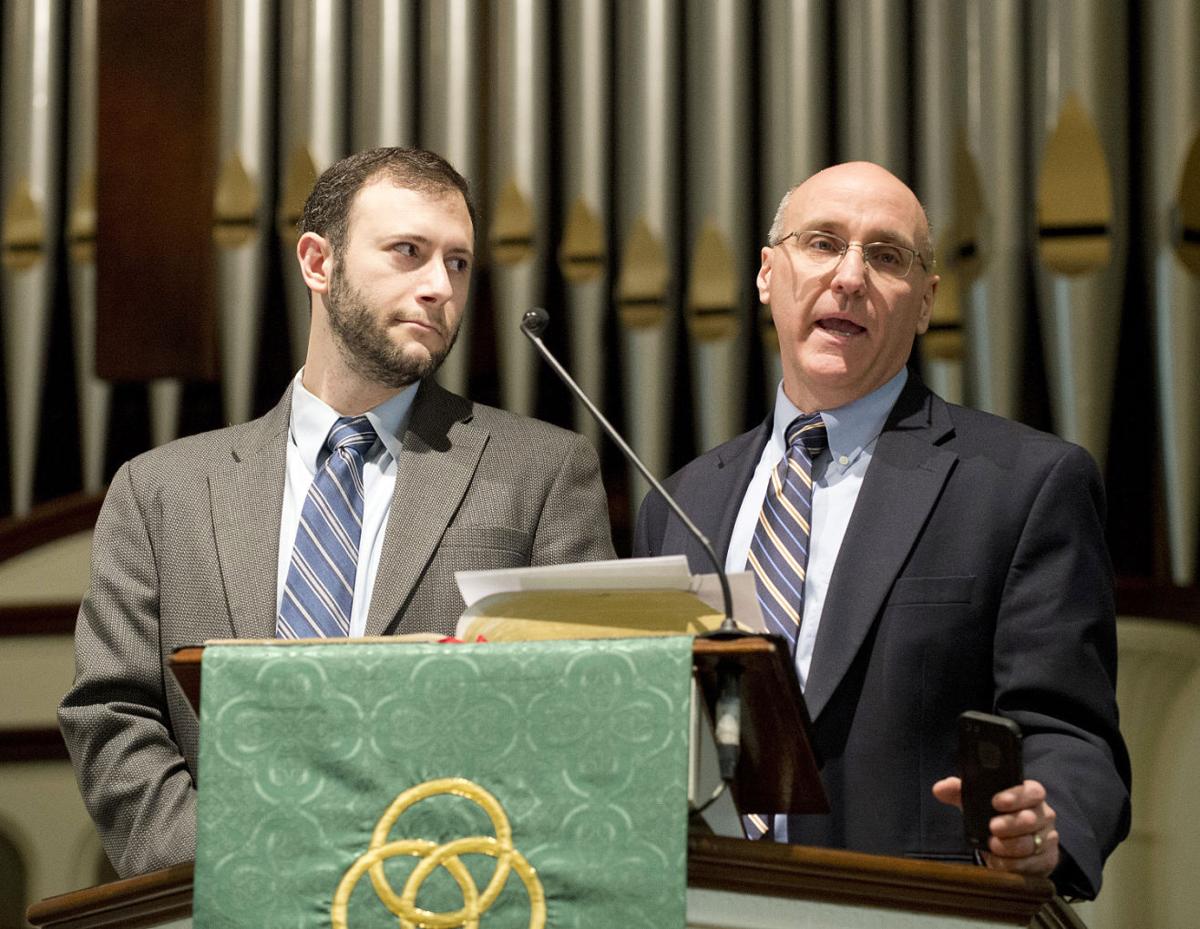 A large crowd fills Frederick Presbyterian Church on Sunday for a community prayer service in response to a recent shooting at Frederick High School.

Messages of community, hope, strength and peace filled the halls of Frederick Presbyterian Church on Sunday as more than 200 people attended an interfaith prayer service in the wake of a shooting that injured two students outside Frederick High School on Wednesday night.

“We come together at this time because we need each other. We need to be with each other in our pain and in our confusion and in our suffering,” said the Rev. Eric T. Myers, of Frederick Presbyterian.

He was joined by Rabbi Jordan Hersh, of Beth Sholom Congregation.

“We come together to remember that we will not be defined by fear, and that we will commit to make this world, our world, our community, an even better place, not just for some, but for all,” the men said, together.

A spokeswoman at Johns Hopkins Hospital, where both shooting victims were treated, said the student who remains hospitalized was in “good” condition Sunday night; the teen had been downgraded to “serious” condition Saturday.

The other student injured in the shooting was released from the hospital Friday.

The prayer service was organized so students, family members and the community could come together to process what happened and look to a brighter future, Myers said.

Leading the group in prayer, Spencer asked that God be with law enforcement as they seek the perpetrators of Wednesday’s violence, and that they might turn themselves in to put the community at ease.

Police spokesman Lt. Clark Pennington said Sunday evening that police had no updates to give about the investigation.

Imam Yahya Hendi, of Frederick, who serves as Muslim chaplain at Georgetown University, encouraged everyone in attendance to become “a community fully committed to justice, peace, unity. Believing that united we stand, and divided we fall.”

The Rev. Barbara Kershner Daniel, pastor at Evangelical Reformed United Church of Christ, said the community was reminded last week that it is impossible to protect oneself from all harm.

“But what we can do is create a community where we care for each other, where it’s safe to express our emotions and our feelings. We can create a community and model healthy relationships and healthy ways to deal with conflict,” she said. “Most of all, we can love and we can care, and we can commit ourselves to never, ever, ever give up.”

“I’m just so appreciative of how the community has come together to support us. It’s been overwhelming,” she said. “It really is a community issue, so I think it’s important to come together.”

Campagnoli said she is proud of how the student body responded.

“We were already a close family, but this brings us even closer,” she said.

Julie Marker, president of the PTA Council of Frederick County, has two daughters who attend TJ High School. She took the message of community building to heart and hopes other parents will help bolster the school communities following the shooting.

“I just want all of the kids to feel safe at school and to know that there’s a broader community that cares,” she said. “We’re not going to move forward unless we’re all in it.”

Belinda Lindner, of Frederick, attended the prayer service with her son, L.J., who is a sophomore at the school. She thought the service was important for the ways it helped those in attendance express their feelings. During a writing exercise, Lindner started with feelings of anger, but ended feeling hopeful.

On posterboards scattered throughout the church building, attendees wrote down acts of kindness, love or justice they would do to make the community a better place.

The resolutions, written in brightly colored markers, began to fill in the white posterboard: “Speak words of love.” “Make a difference.” “Always take care of your neighbor.” “Be an instrument of peace.”

The posters will be given to Frederick, TJ and Tuscarora high schools to serve as a visual reminder that the schools belong to a community of hope, Myers said.

More in Ongoing coverage of the Feb. 4 Frederick High School shooting (9 of 15)

Oh, brother. Why do accidents and crime (e.g., murders) bring out the crackpots? To each his own, but this reminds me of the makeshift memorials that bring out the nuts. Writing assignment(s) and poster boards? Please. "Healthy" relationships and "healthy" ways to resolve conflict? The pop psychology terminology is in full force.
"United we stand, divided we fall." Yeah, that's really going to resolve issues in the future. Oh; was that old "Brotherhood of Man" song, "United We Stand" sung?

I wish the actual families affected and the wounded two well in their recovery. I'm sure that the crime will be something that will affect them all for a long time to come. But people who have the overwhelming need to get their feelings out in a group setting and so forth are absurd.

I attended the service yesterday. This photo is a small snap shot of the over 200 in attendance. There was diversity in race, religion and schools. God was mentioned time and again through various scripture readings as well as many quotes by Dr. Martin Luther King Jr. This service was advertised directly to students and families of the schools effected by this horrible act on Wednesday night. The prayer service was a beautiful community building experience for all who attended.

Nice thought but not one of the victims or shooter's friends or family are part of any of the congregations represented there. You can tell by the demographics.

You would think they would have been more inclusive in their invite, bridging the gap to be more representative of the multi-cultural and multi-ethic make up of Frederick High School.

Interesting how so few of the quotes from attendees and faith leaders mention faith or god. I wonder if that was the reporter or if this prayer meeting was as secular as portrayed.

Needed, some one knows,money needed , start afund to buy the info 10,000 and above,prayers OK money better to catch the criminals.Do it church goers now. I will donate when this begins.

"Love is the opening door. Love is what we came here for !! No one can offer you more ! Do you know what I mean ? Have your eyes REALLY seen ?

Pretty sure there will be some arrests this week.

Also , I wonder if these guys are connected to the discovery shopping ctr shooting.