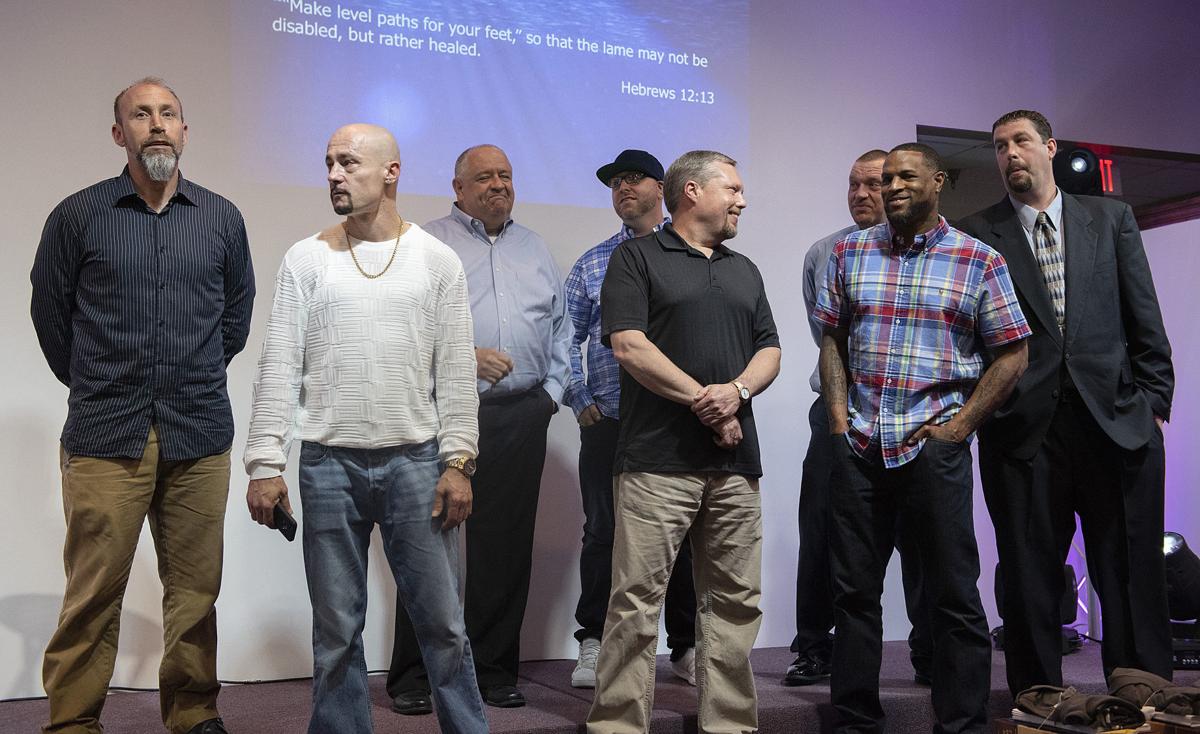 The eight graduates stand in front of a large crowd at Strong Tower Christian Church Friday night. They were classmates in the Frederick Rescue Mission's Changed Life Recovery Program. 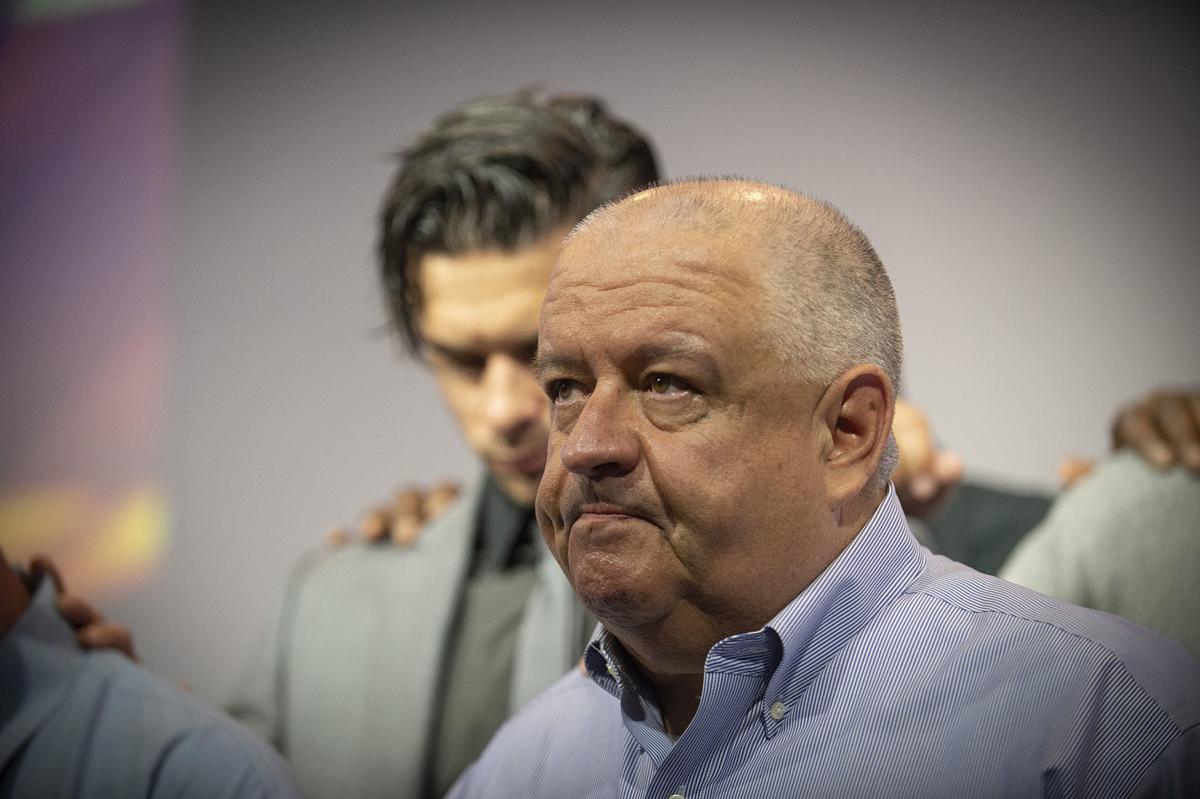 John O’Neill stands with his fellow recovering classmates during prayer as the graduation ceremony comes to a close. The eight men were participants in the Frederick Rescue Mission's Changed Life Recovery Program. 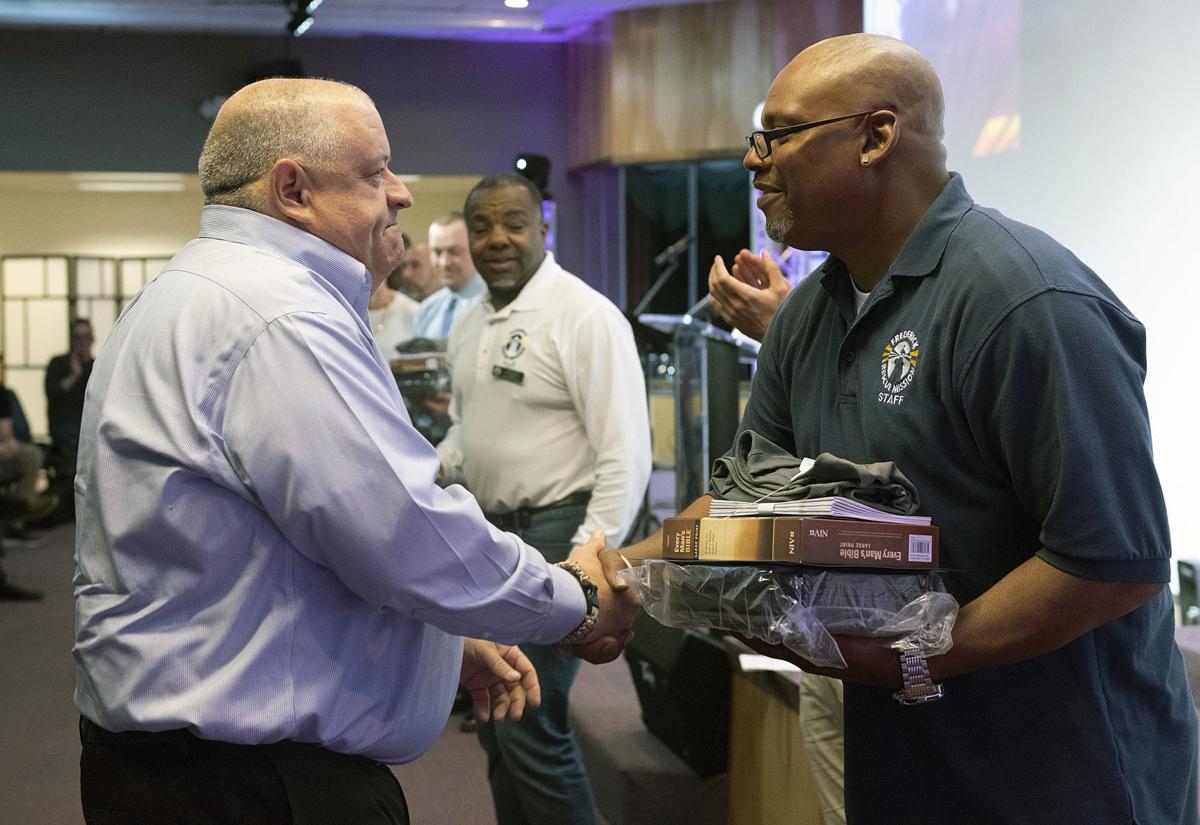 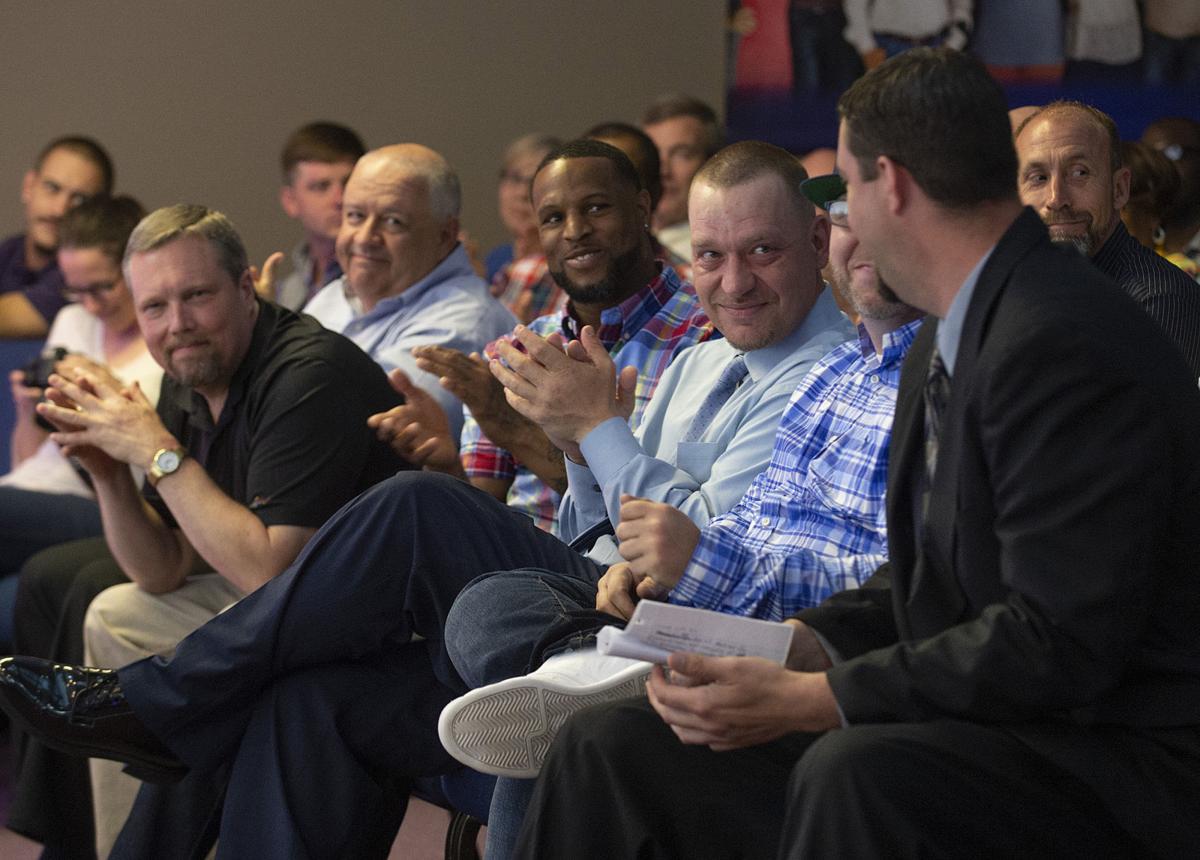 Some of the eight men to graduate from the Frederick Rescue Mission’s Changed Life Recovery Program applaud after a classmate’s speech.

The eight graduates stand in front of a large crowd at Strong Tower Christian Church Friday night. They were classmates in the Frederick Rescue Mission's Changed Life Recovery Program.

John O’Neill stands with his fellow recovering classmates during prayer as the graduation ceremony comes to a close. The eight men were participants in the Frederick Rescue Mission's Changed Life Recovery Program.

Some of the eight men to graduate from the Frederick Rescue Mission’s Changed Life Recovery Program applaud after a classmate’s speech.

John O’Neill knows how to drink.

Whether it was beer, wine or liquor didn’t matter much. “Anything” was his alcoholic beverage of choice.

He held down a job, had a place to live, seemingly functioned like any other adult, except that he was most likely drunk while doing it. And for four decades, it worked.

Until it didn’t. One thing led to another, and O’Neill ended up homeless, living on the streets of Baltimore. Like a splash of cold water, the shock of his new life forced him to wake up, to realize he needed to change.

O’Neill is now closing in on the one-year mark without a drink. He rattled off the months and days of sobriety quickly — 11 months and four days as of Wednesday.

It hasn’t been an easy journey. There were many times when he wanted to give up and take a drink. But he persevered, leaning on the support and structure of the Frederick Rescue Mission’s Changed Life Recovery Program. O’Neill was one of eight men to graduate from the faith-based men’s residential recovery program Wednesday, marking the occasion with a ceremony at Strong Tower Christian Church in Frederick.

Cheers and applause reverberated through the packed room as family, friends and program employees celebrated the graduates. They shared words of encouragement and advice, quoting Bible verses and singing contemporary gospel-style music.

O’Neill was all smiles as he joined the other graduates at the front of the room, holding open his diploma to display the certificate inside. But after the applause died down, and participants began to file out of the church, his face grew serious.

Asked how he felt about completing the program, he answered in a single word: “apprehensive.”

How to resume a life of seeming normalcy was a daunting prospect. Or as he put it, “doing everything in my life, but without drinking.”

From a purely statistical standpoint, odds are not in his favor when it comes to staying sober.

Of the 118 men who graduated from the program between 2002 and 2012, 18 are in “some form of sobriety” today, according to information shared by Carlton Hill, the Rescue Mission’s director for recovery services. And 14 of the 40 men who completed the program from 2014 to 2017 are still sober.

There were no records available for men who graduated between 2012 and 2014, according to Hill.

And not everyone makes it that far.

About 60 percent of men who enter don’t graduate, according to Hill. A majority of those who leave do so in the first few months, forced out because they violate the strict ban on drugs and alcohol or leave by choice.

Others relapse in the final weeks or days before graduation, not used to the success they are achieving or unable to cope with the pressure of moving on. A ninth person was supposed to join with the most recent class of graduates, but was not at the graduation Wednesday for this very reason, Hill said.

Andrea Walker, director of Behavioral Health Services for the Frederick County Health Department, was reluctant to compare the mission’s success rates with those of other programs, noting the varying definitions for treatment, sobriety and other variables.

Cynthia Terl, director of community outreach for Wells House@Gale Recovery, a residential addiction treatment program in Frederick, characterized the mission’s data as “better than some, but probably not as good as others.”

Despite the statistical likelihood that many of the men who graduated Wednesday will relapse, program leaders and outside drug treatment providers emphasized the benefits of the mission’s programs.

Santita Prather, Frederick County Health Department’s recovery services manager, likened recovery and rehabilitation options to a restaurant dining experience. It’s good to have a menu of options to choose from, and the Changed Life Recovery Program means one more choice, she said.

“Recovery is as individual as the individual trying to recover,” Terl said. “It’s not a one-size-fits-all.”

The mission’s recovery program fills a specific niche within the greater landscape of treatment options. It is not intended to be a medically supervised detox or rehabilitation program, as Executive Director Arnold Farlow was quick to note.

Acknowledging that the physical symptoms of withdrawing from certain substances require medical supervision, participants are required to first complete a medical detox at a hospital or other medically certified drug rehabilitation center, Farlow said.

Apart from the requisite detox and a $500 admission fee, which many opt to pay off through the income they earn by working with the mission, there are few restrictions to entry.

But that doesn’t mean it’s easy. Participants are expected to commit to recovery through a daily curriculum that includes scriptural studies, medical education about the physical ramifications of addiction and substance use, religious-based counseling and work at the mission’s West South Street campus or other charity operations.

The program dates back more than 50 years, but became more structured over the last two decades. Farlow, who came to the mission in 2005, described its early days as a “flophouse” — a place where men went when they had nowhere to go but without the rules and requirements that would help them sober up.

For many, then and now, drug use and addiction is just part of the battle, the most externally obvious sign of the problems below the surface. Farlow framed the program as a “holistic” approach to recovery, addressing both substance use and the reasons that drove men to drugs and alcohol in the first place.

“Your drug problem is a problem, but it’s not the entire problem,” he said.

Hill highlighted “that extra something” in the mission’s approach as the reason for his own success in recovery. He’s now 16 years clean and a 2003 graduate of the Changed Life Recovery Program.

He had already tried a few other recovery programs before entering the mission’s program in 2002, Hill said. But they didn’t stick; he would relapse, begin using again: alcohol and cocaine.

In the Frederick recovery program, he was forced to confront his “inner demons.”

“Addressing the things I was trying to run from, that was big for me,” Hill recalled.

The program’s emphasis on education and training also helped him find success. After graduating, he went on to earn an associate degree in human services from Frederick Community College as well as state certifications as a peer recovery specialist and addiction counselor, all the while working jobs both in and out of the mission.

Farlow emphasized individual interest as the determining factor to where and when they succeed in recovery.

O’Neill appeared genuine as he spoke about his desire to live a clean life and his more devout attitude toward God.

He’s already secured a job, working as an office assistant for Second Chances Garage. He’s found a church to call home at St. John the Evangelist Catholic Church. He has a sponsor, and plans to continue participating in a 12-step program while moving to the Rescue Mission’s transitional housing.

“Getting real with Jesus” was the key to ending his drinking, he said.

Tears filled his eyes as he explained how accepting God’s forgiveness taught him to look forward instead of dwelling on past transgressions. That has also meant breaking ties with some of the familiar figures in his former life, people he’s hurt and who have hurt him, whose continued drinking he knew would only steer him down a path he didn’t want to consider.

Unlike many of the other graduates whose family and friends came to the graduation to celebrate their loved ones accomplishments, O’Neill’s did not. But he did not feel alone, he said, gesturing to the other graduates with whom he’d locked arms and exchanged hugs and handshakes minutes before.

“These people, they are my brothers, my family,” he said.

What do you see as the most important factor in continued success after completing a drug or alcohol recovery program?