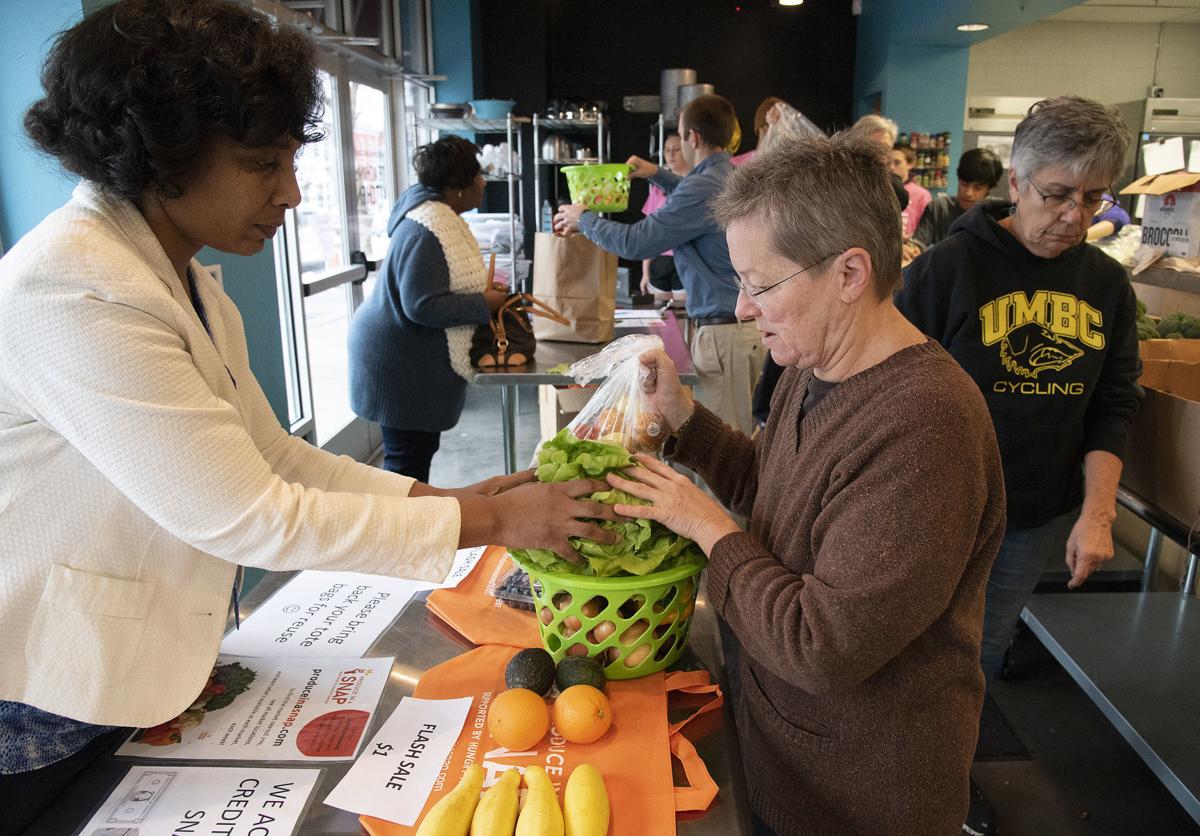 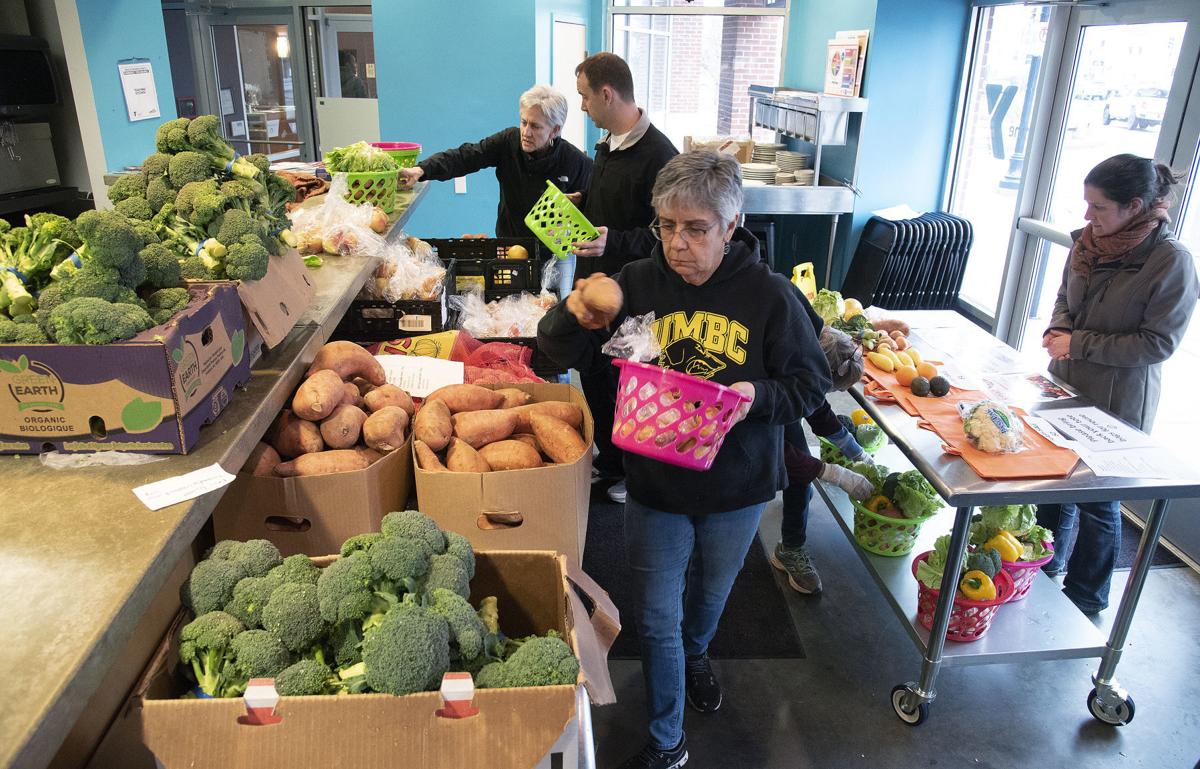 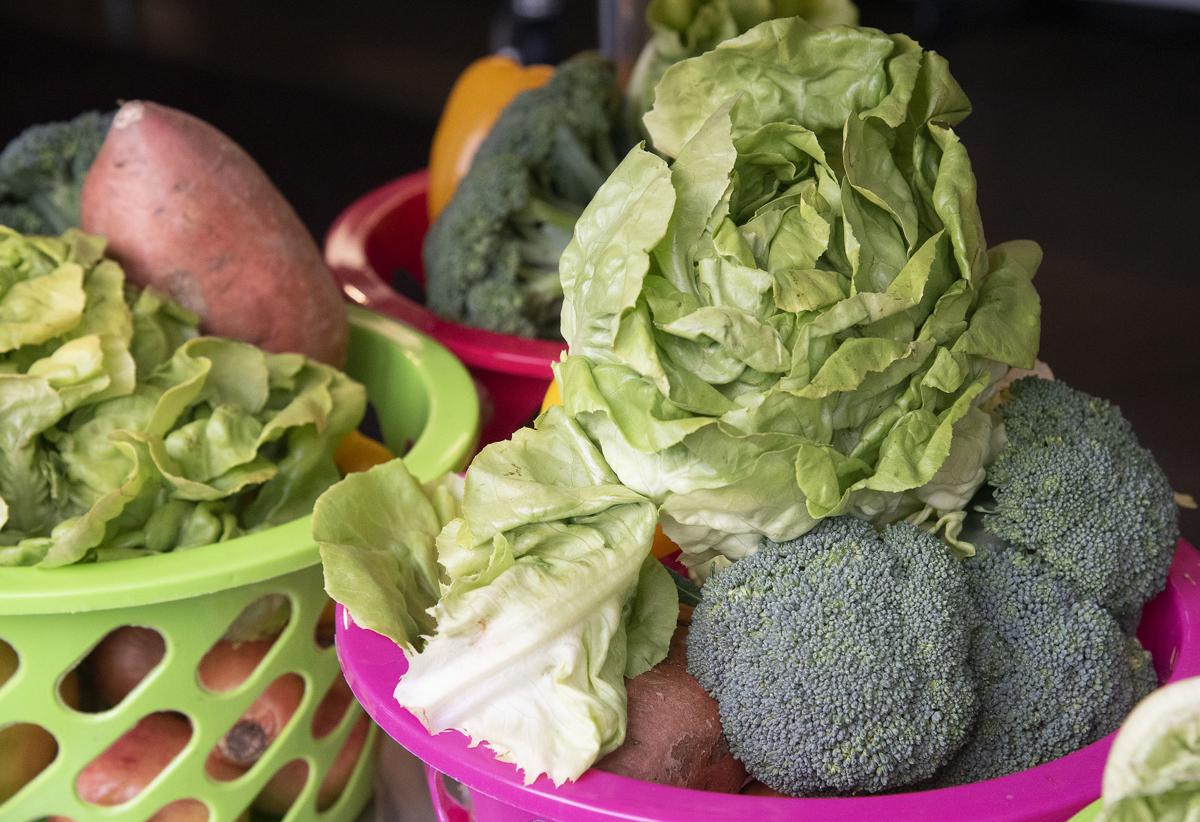 Baskets of fresh vegetables are seen at the Hungry Harvest reduced-cost produce market at the YMCA of Frederick County's teaching kitchen.

Baskets of fresh vegetables are seen at the Hungry Harvest reduced-cost produce market at the YMCA of Frederick County's teaching kitchen.

Those afternoons are for going to the market.

“The food is good. It’s good-quality produce,” Thorne said as she looked into her brown paper bag of apples, peppers, lettuce and broccoli.

The 69-year-old Frederick resident is a regular visitor to Produce in a SNAP, a program from the Baltimore-based Hungry Harvest to bring reduced-cost produce to markets with geographic or financial barriers to healthful food.

“I’m a senior on a limited income, and it supplements what I buy at the grocery stores,” Thorne said.

The weekly markets hosted by the YMCA of Frederick County staff and volunteers sell fruits and vegetables that farmers or retailers cannot sell because of blemishes. People at the market can get the produce for about half the cost of grocery store prices, according to Hungry Harvest’s website.

For $7, people at Wednesday’s market got a basket of lettuce, broccoli, peppers, potatoes, pears and apples. For a few dollars more they could add avocados, blueberries or cauliflower. Patrons of the market can pay with their Supplemental Nutrition Assistance Program and Electronic Benefits Transfer money. Nearly 6,000 county households receive SNAP benefits, according to the U.S. Census Bureau.

Stacy Carroll, Hungry Harvest director of partnerships, said the organization has expanded to about 30 markets along the East Coast. While Hungry Harvest previously targeted its markets to areas considered “food deserts” where there is little access to healthful food, the organization now looks at a number of factors, she said.

“Just because there might be a grocery store doesn’t mean that the healthy food is accessible,” Carroll said.

More than 15,400 people in Frederick County are considered food insecure, meaning they lack access or the financial ability to purchase healthy food, according to Feeding America.

The low prices and the ability to swap out some foods for others keeps Thorne coming back, she said. Thorne also brings friends to the market.

Molly Spence said she learned about the market on Facebook. Her family of four, which includes two young children, eats a lot of produce, which can get expensive, she said. They like to go to farmers markets and grow their own food, but their options are limited in the colder months.

“I just think it’s a great thing that they’re offering and I hope it sticks around,” the 41-year-old Frederick resident said.

The Produce in a SNAP markets were previously held at Lucas Village when Hungry Harvest’s local partner was the Housing Authority of the City of Frederick. The partnership with the YMCA began in January.

Around 100 people come the market every week, said Leia Wood, YMCA director of arts and humanities.

The market is open every Wednesday from 3 to 6 p.m. at the YMCA’s teaching kitchen in the Bernard W. Brown Community Center, 629 N. Market St.

A new ugly produce company might start popping up in Frederick as it expands into the Maryland area.