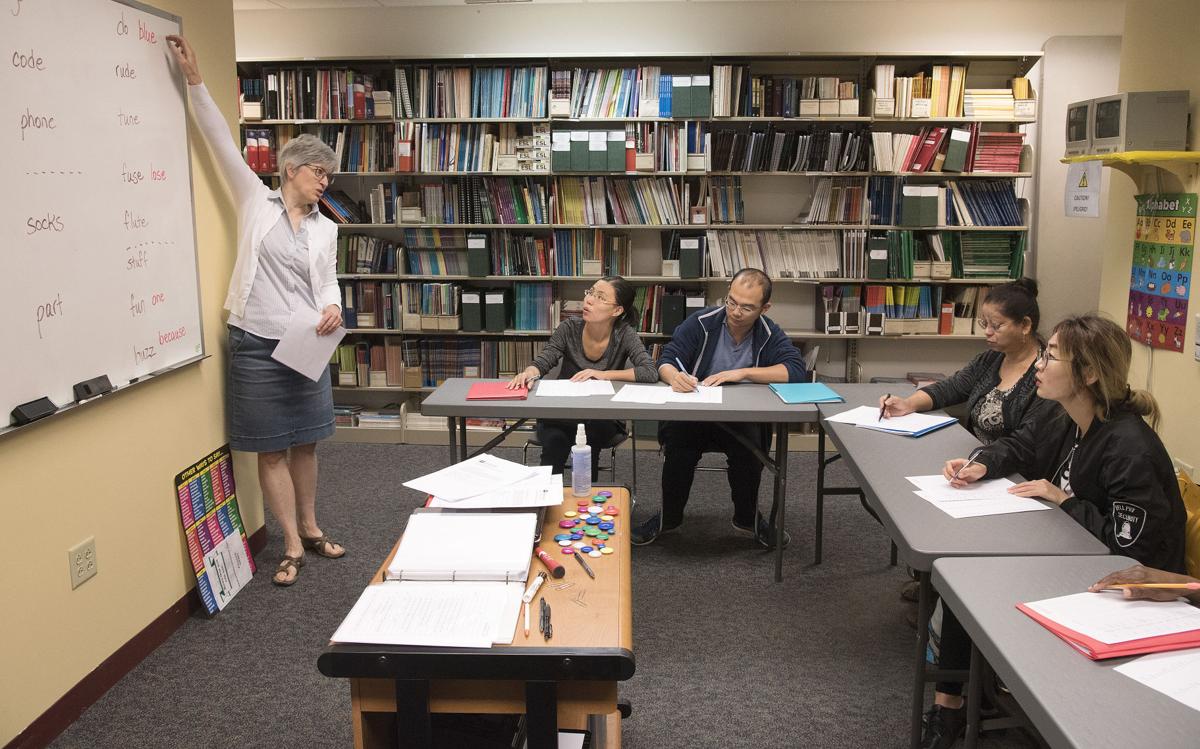 Stephanie Parchment, left, a volunteer tutor for the Literacy Council of Frederick County, leads an English pronunciation class Thursday at the council’s office in Frederick. 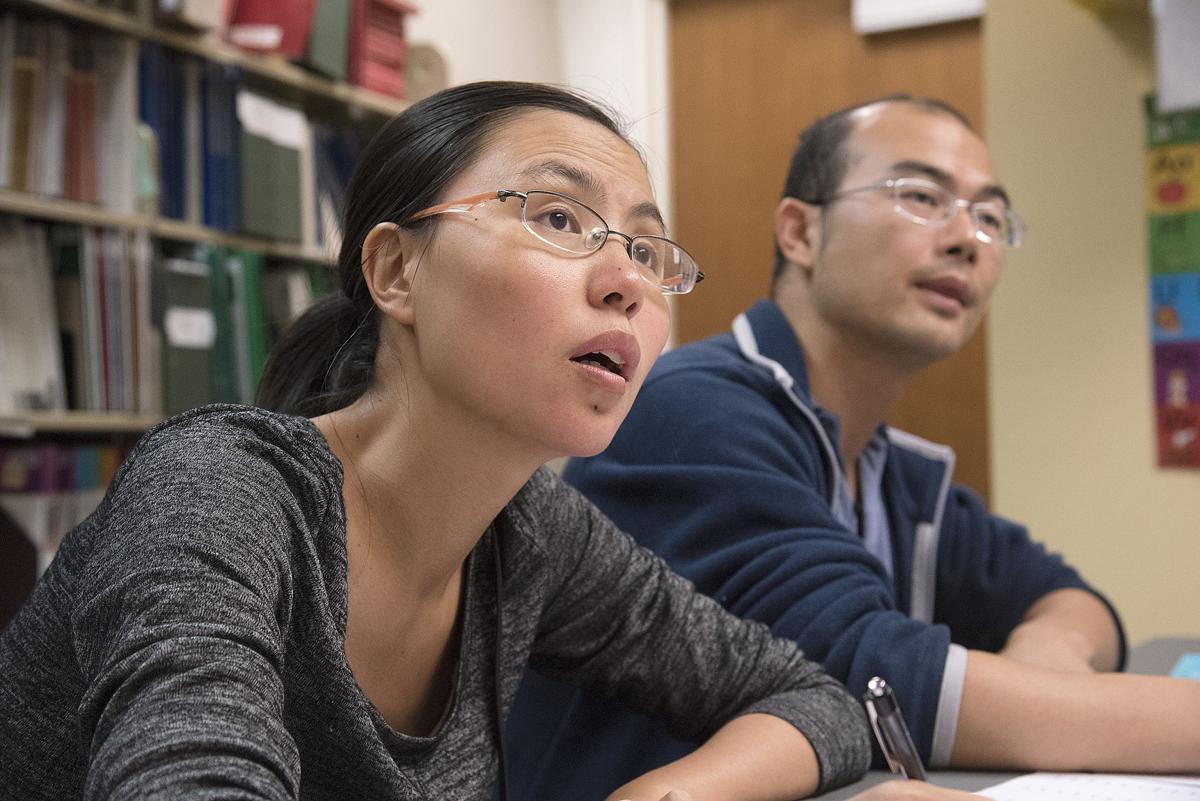 From left, Lina Li and Rui Liu are students in an English pronunciation class on Thursday at the Literacy Council office in Frederick. 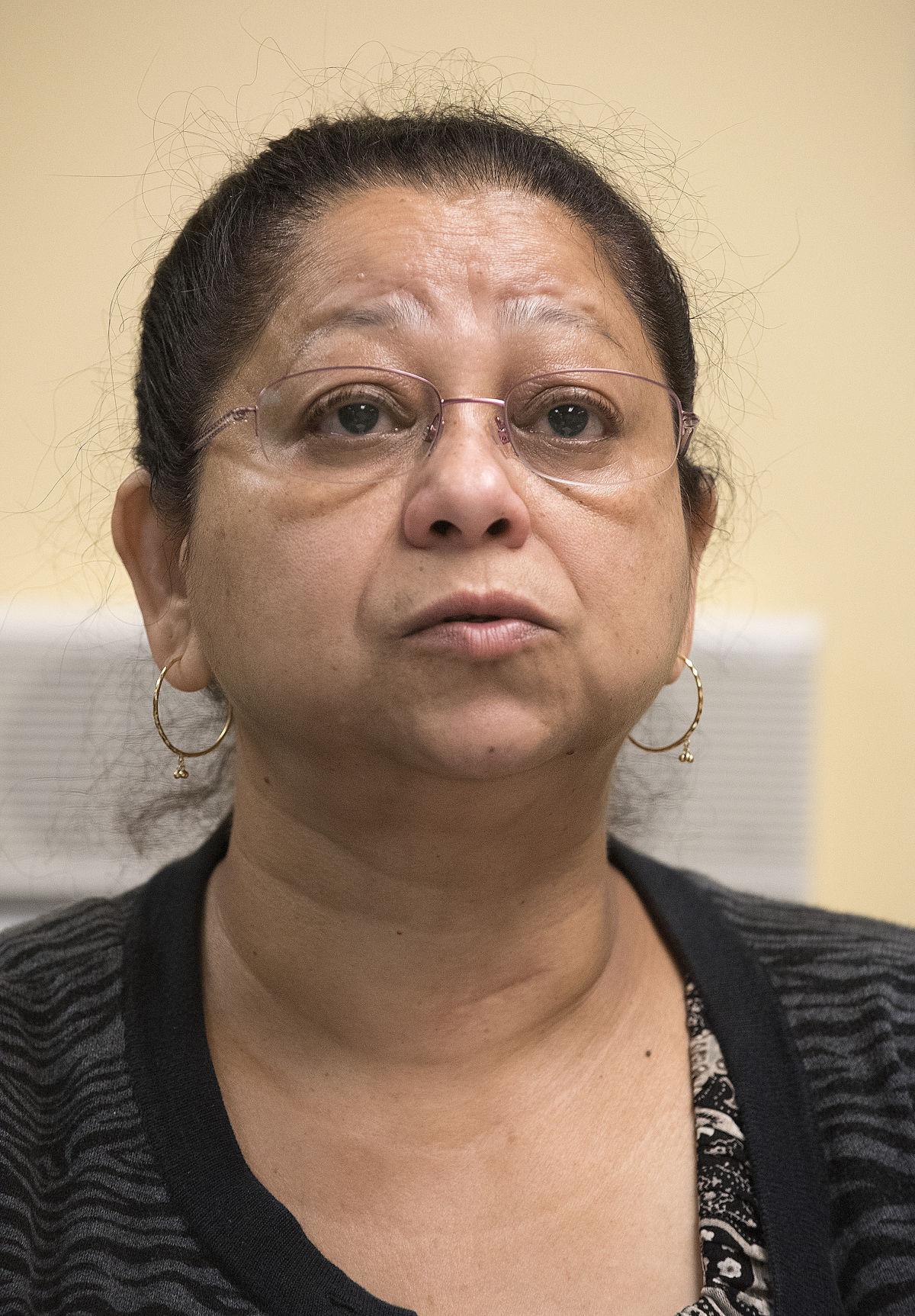 Louisa Rozario practices pronouncing English words in a class on Thursday at the Literacy Council office in Frederick.

Stephanie Parchment, left, a volunteer tutor for the Literacy Council of Frederick County, leads an English pronunciation class Thursday at the council’s office in Frederick.

From left, Lina Li and Rui Liu are students in an English pronunciation class on Thursday at the Literacy Council office in Frederick.

Louisa Rozario practices pronouncing English words in a class on Thursday at the Literacy Council office in Frederick.

When Young Sil Ryu started English lessons at the Literacy Council of Frederick County in 2015, she was shy. When listening to her tutor speak, Ryu kept her eyes toward the floor.

Ryu is originally from Seoul, South Korea, and has lived in Frederick for 25 years, interacting mostly with her husband and two children. At 53, she’s younger than Julie Heifetz, her tutor. Korean etiquette considers eye contact with an elder who is speaking impolite.

Now, after more than two years of individual tutoring through the Literacy Council, Ryu not only looks up when people speak, she watches Heifetz’s mouth to learn how to form the words.

Ryu has started taking English classes at Frederick Community College. After class and after working with her husband’s cleaning company, Ryu studies English late into the night, she said.

“When I first came to the United States, I was very shy to try to talk in English,” Ryu said. “I feel more confident [now].”

Ryu is one of many Frederick County residents who rely on local nonprofits offering services for immigrants and others seeking help with their English-language skills.

The Census Bureau’s 2016 data put the number of Frederick County residents speaking a language other than English at home who report speaking English less than “very well” at 14,668.

The Literacy Council and the Asian American Center of Frederick are both participants in the 2017 Unity Campaign, which runs through Sept. 24.

At the Asian American Center of Frederick, Da Chung proudly pulls a picture frame from her tote bag to show the other students in her Level 4 English as a Second Language.

Chung shows off a photograph of President Donald Trump and first lady Melania Trump. Below the image are printed reproductions of the Trumps’ signatures. Along with the photo, Chung has a letter from the president thanking her for her support.

“I feel like I’ve known the president for 10 years,” Chung said. “I feel like he’s a part of my family.”

Chung, 65, is originally from Ho Chi Minh City, Vietnam, but has lived in Frederick for 41 years. She said she and her late husband failed a U.S. citizenship exam several years ago after studying on their own.

In 2015, Chung started taking English-language courses at the Asian American Center and using the agency’s Citizenship Integration Services. She became a U.S. citizen in September 2016 and voted for the first time in her life in the November general election. She registered as a Republican, she said, because her husband liked Republicans.

“I’m so happy,” Chung said. “Before, I’d go outside, people said things to me I couldn’t understand. It was embarrassing for me. Now I tell people I am a U.S. citizen.”

More than 200 people use the center’s free English classes and free Citizenship Integration Services, according to Executive Director Elizabeth Chung. Chung founded the center in 2012 after working with three other nonprofit agencies.

“We wanted to create a place that is very accessible to the community,” Chung said. “We’re open late. People can just walk in and ask for help.”

In the Asian American Center’s vision, English literacy is just one facet of what immigrants need to be successful U.S. citizens. The center also runs a number of health programs, including helping immigrants and low-income Frederick residents buy health insurance and hosting health fairs. The center partnered with Frederick Memorial Hospital to certify community health workers.

Despite its name, the Asian American Center supports people of all ethnicities and nationality status. When The Frederick News-Post visited earlier in September, volunteers were helping a Peruvian couple with their citizenship applications. The center’s English classes and job-finding resources are also open to U.S. citizens, Chung said, and are particularly geared to the low-income and minority populations.

The Literacy Council also works with many U.S. citizens who speak English fluently but for one reason or another struggle to read and write.

“Adults come to us for a variety of needs and with a range of goals,” Executive Director Laurie Fisher said. In addition to writing, pronunciation, conversation and basic computer classes, the council has more than 100 volunteer tutors who work with 225 adult students one-on-one and in small groups.

Mark Randolph, who turns 30 in October, is one such student. Randolph grew up in Frederick and attended Gov. Thomas Johnson High School, but he never graduated.

Randolph has worked with tutor Ron Lindstrom since March 2015, when he entered the GED program at Frederick Community College.

Randolph does his GED class homework on his own, but he and Lindstrom work their way through the Laubach Way to Reading workbook series, designed for adult English learners. They’re in the middle of the most advanced workbook in the series.

Randolph has worked at Safeway for three years, mostly cleaning and doing backroom tasks. He hopes getting a GED and improving his reading and writing will help him get a different job, he said.

The Literacy Council and the Asian American Center both have programs aimed at helping adults find jobs or assisting employers in educating their workers. The Literacy Council has partnered with businesses, mostly in construction and hospitality, to help employees improve their reading and writing skills.

“We work with companies whose workers don’t necessarily need to read and write to do — for instance, kitchen work,” Fisher said. “But developing those skills could help them advance within their current company.”

The Literacy Council has also worked with longtime workers who suddenly find themselves needing to pass licensing exams to meet new regulations in their field, according to Fisher.

“The goal is to improve the economic well-being of the whole county,” she said.

The Asian American Center also has partners in the business community, according to Elizabeth Chung. Chung worked with H-Mart when the company was setting up its Frederick location. The center hosted a job fair during which dozens of people were hired, Chung said.

“We want immigrants to be integrated, and we’re here to help them,” Chung said. “We try to build bridges between the mainstream community and the minority population.”

That has been the experience of Sandra Doggett, a tutor for both the Asian American Center and the Literacy Council. Doggett has worked with Cho Cho Lwin, who immigrated from Myanmar in 2013, for two years, she said.

“We became sort of like family,” Doggett said. “I helped Cho Cho get her driver’s license last year. This spring I was sick and needed a ride to the doctor. Guess who picked me up?”

Bonds are also built through the Literacy Council’s individual tutoring. Lindstrom and Randolph recently traveled to Baltimore together to watch an Orioles game.

The individual and small group approach benefited Ryu and Heifetz’s working relationship. It allows Heifetz to focus on the unique needs of Ryu and Eunhee Seo, another Korean student who studies with them.

“Understanding the cultural differences is essential for a tutor to be effective,” Heifetz said. “I know how disabling it is to be unable to speak, being unable to express their personality.”

“She is a great teacher,” Ryu said of Heifetz. “I think of Julie as my American mom.”

The 2017 campaign aims to raise $400,000 for 27 Frederick agencies that serve basic human needs and at-risk youth. Donors can specify which agency they want to receive their contribution, or spread it equally among all groups.

You can donate to the Unity Campaign by mail or online:

Write a check made out to United Way of Frederick County with the memo line "Unity Campaign" and mail it to the United Way at 629 N. Market St., Frederick, MD 21701.

Or go to unityfrederick.com. and make an online donation via credit card.