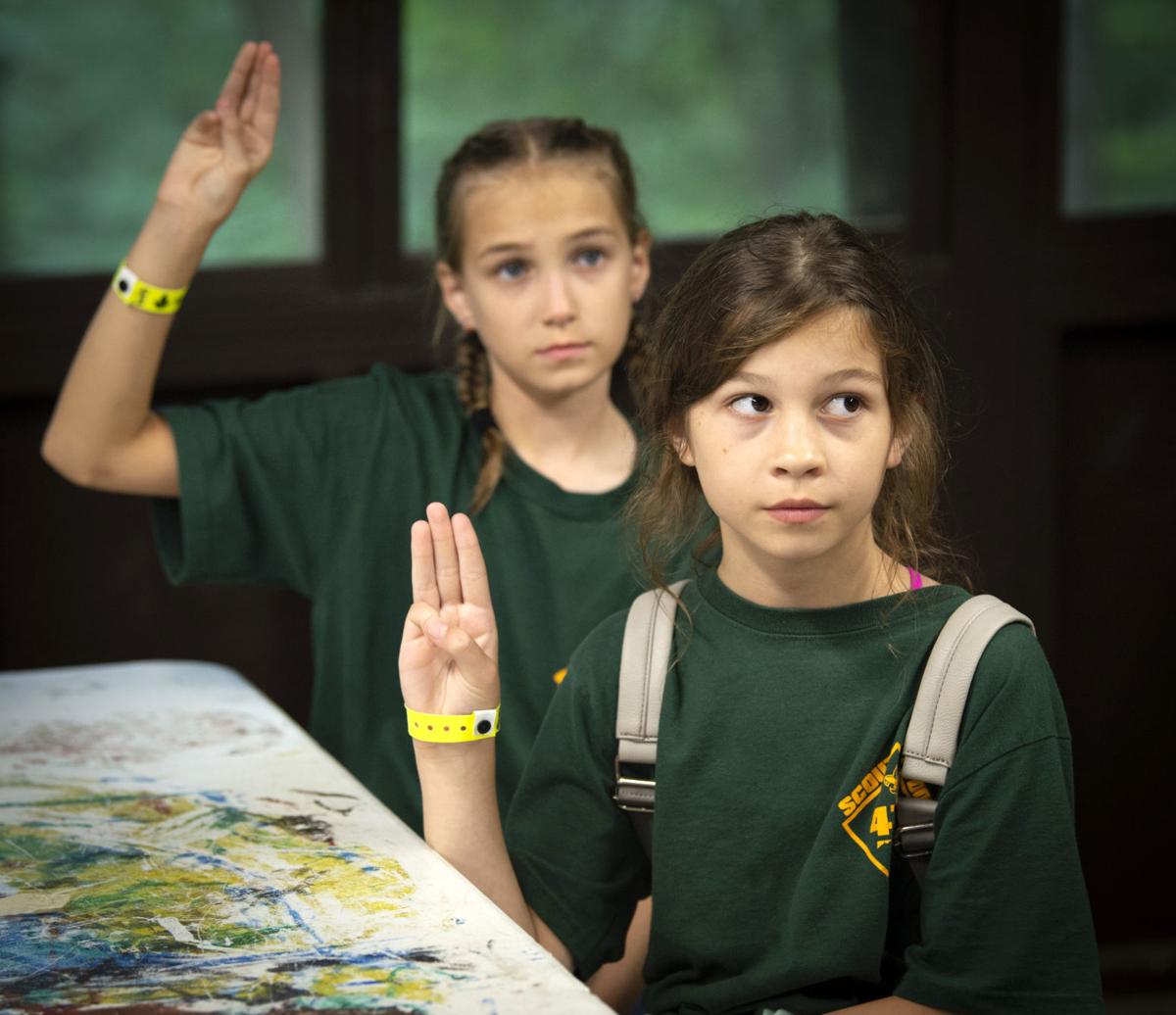 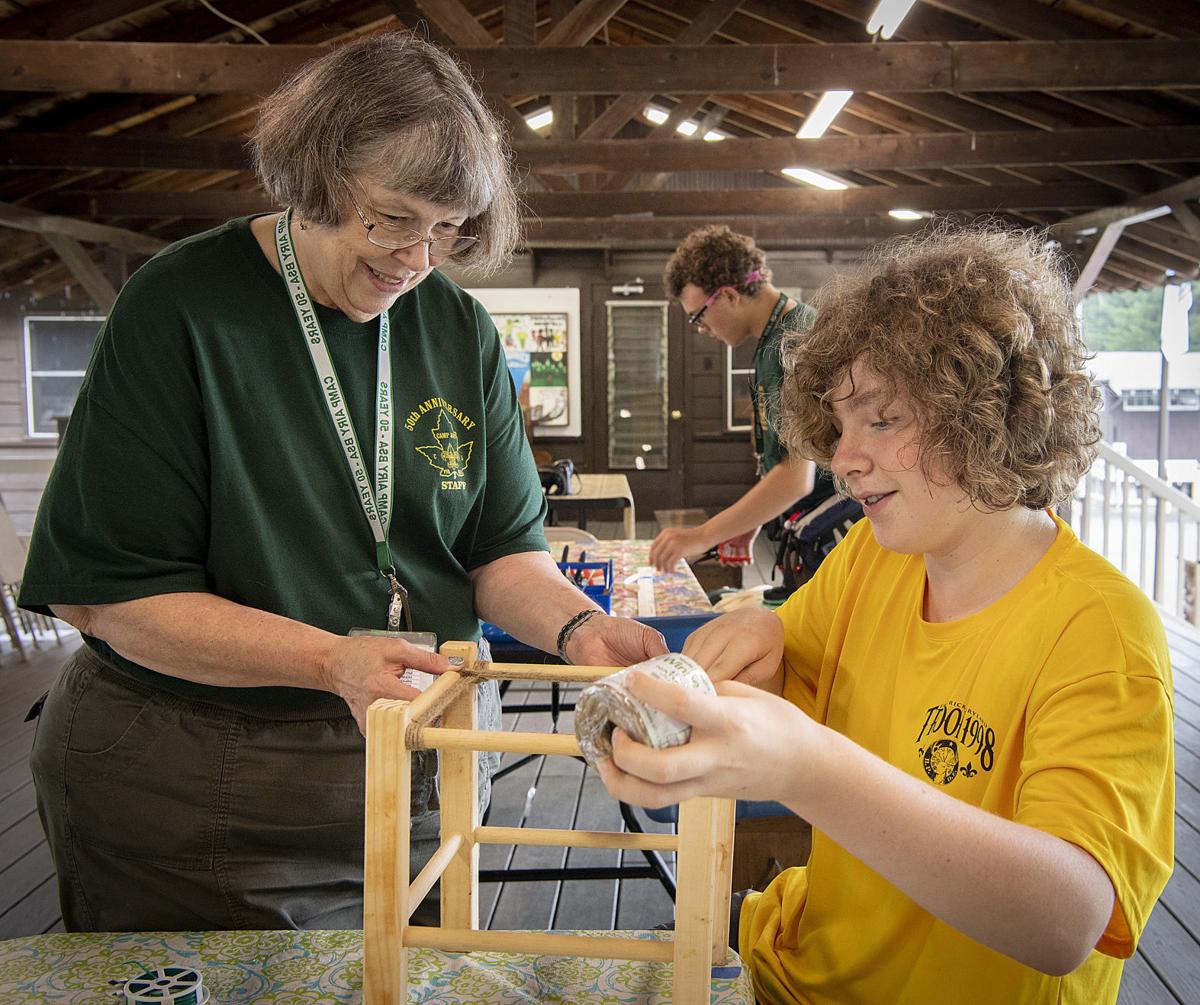 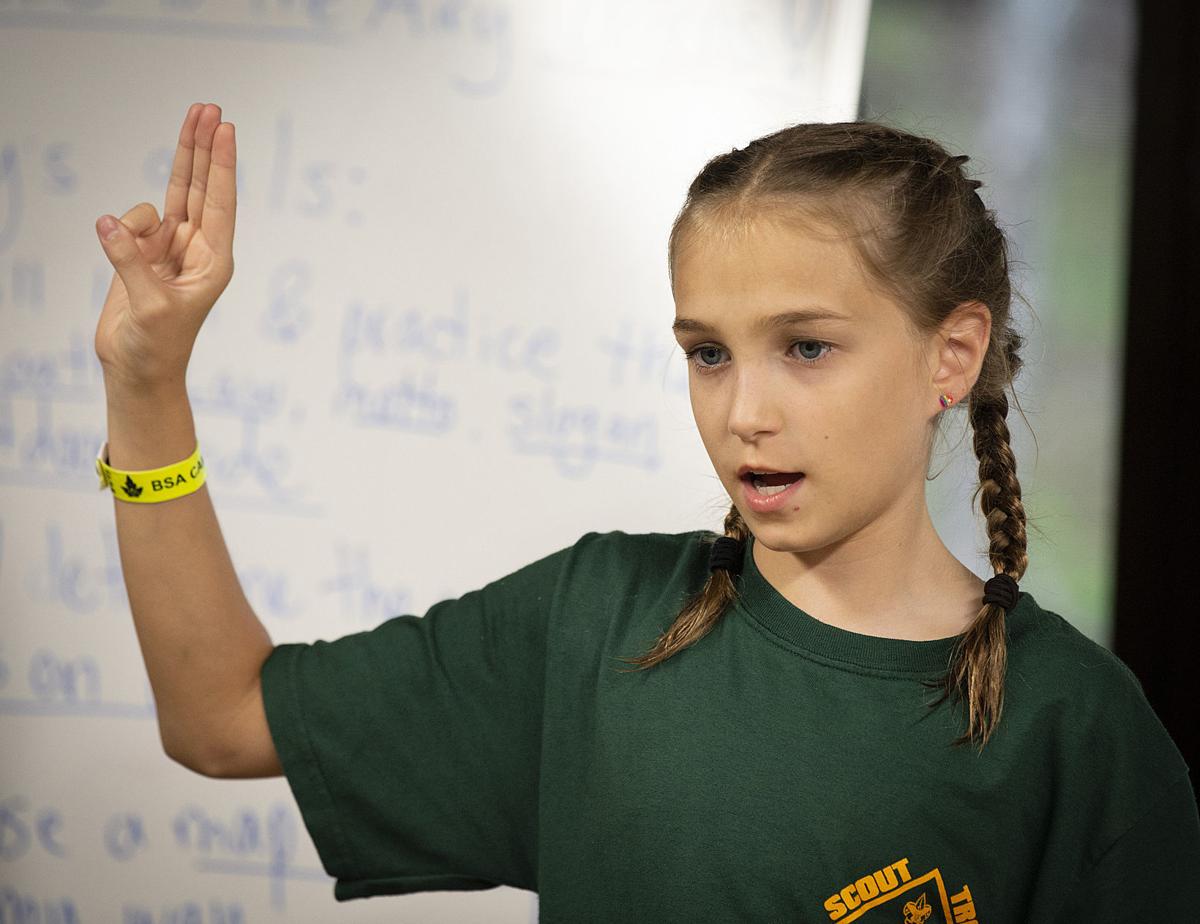 First-year Scout Violet Stann, 11, display the Boy Scout sign as she leads a group reciting the Scouting pledge in their Scout skills class, which began Tuesday afternoon at Boy Scouts of America camp at Camp Airy in Thurmont. 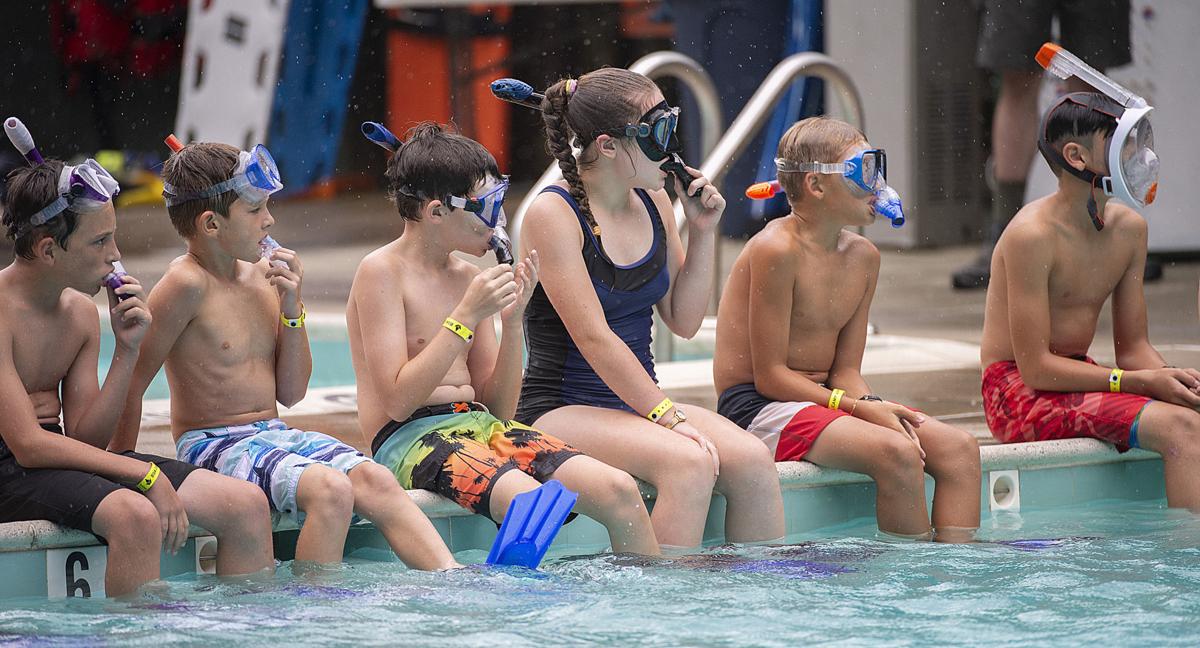 A snorkeling class sits on the side of the pool at the start of their first class Tuesday afternoon at Boy Scouts of America camp at Camp Airy in Thurmont.

First-year Scout Lauren Doring, 13, jumps from the side of the pool into the water for the first time in a snorkeling class Tuesday afternoon at the weeklong Boy Scout camp held at Boy Scouts of America at Camp Airy in Thurmont.

First-year Scout Violet Stann, 11, display the Boy Scout sign as she leads a group reciting the Scouting pledge in their Scout skills class, which began Tuesday afternoon at Boy Scouts of America camp at Camp Airy in Thurmont.

A snorkeling class sits on the side of the pool at the start of their first class Tuesday afternoon at Boy Scouts of America camp at Camp Airy in Thurmont.

First-year Scout Lauren Doring, 13, jumps from the side of the pool into the water for the first time in a snorkeling class Tuesday afternoon at the weeklong Boy Scout camp held at Boy Scouts of America at Camp Airy in Thurmont.

Violet Stann, Lauren Doring and Eloise Dominesey stand under the awning of a wooden cabin wearing green T-shirts as Nick Maliszewskyj reads off more than 100 names.

The girls stand out, though. Not because of the colorful backpacks hanging off their shoulders or the tapping noises Violet keeps making with her foot. They stand out because they are the only three female campers present.

After 60 years, Violet, Lauren and Eloise are the first girls to attend the Boy Scouts of America camp.

Since 1959 the Boy Scouts of America camp has only accepted boys. There have been female staffers for years, but never campers. With the change of Boy Scouts policy last year allowing girls to become Cub Scouts and then this year allowing girls to become Eagle Scouts, the camp has now opened to girl campers. And the Boy Scouts of America camp welcomed their first three this summer along with marking an anniversary.

“Ever since my brother has been a Cub Scout it’s just been my dream to join and they finally opened it up to girls and I’m really happy about that,” said Violet, 11.

Thomas Grosskopf, 16, has been attending the Boy Scouts of America camp for six years and thinks it’s about time they opened it up to girls.

“It’s a camp. Why shouldn’t girls get to come here too. ... Everyone should get to experience it,” Grosskopf said. “And it’s kind of cool that they get to come on the 60th year.”

Camp director Kurt Yankaskas agreed, saying the camp has always wanted to accept girls but couldn’t due to the previous Boy Scouts policy.

The allowance hasn’t come without a catch, though. The girls cannot stay overnight and must be dropped off and picked up every morning and evening. The BSA leases the complex.

The Camp Airy facilities near Thurmont were traditionally built for a Jewish boys summer camp, but they have facilities for girls, said Neil Berlin, director of operations for Camps Airy & Louise.

Violet said it’s annoying the Boy Scouts of America camp doesn't allow girls to stay overnight, because it means she has to be up at 5 a.m. every day to make it to the camp on time, but she is still having fun.

The one-week BSA summer program was started by Troop 779 of the Francis Scott Key District of the Boy Scouts of America and has been rented from Camp Airy since its inception.

The volunteer-run program offers traditional camp activities such as swimming and hiking as well as opportunities for scouts to complete merit badge programs, according to Maliszewskyj.

He went on to say that the camp is unique because it provides campers merit badge programming that is different from what is found at traditional BSA camps. For example, there are daily courses related to STEM fields such as robotics, engineering, game design and cybersecurity.

All the courses are led by volunteers who have worked as professionals in the related field.

“It’s sort of morphed into an operation that can provide programs that local troops can’t do easily on their own,” Maliszewskyj said.

And almost all the activities are hands-on.

“We like to teach what we learn. You go through the textbooks in school. This is real-life application,” Yankaskas, said.

While most of the campers are from Frederick County, the program has seen others from Virginia Beach to Pennsylvania, Maliszewskyj said. Registration begins in the spring, and the cost fluctuates each year depending on need and demand. This year, according to Becky Stalnaker, camp commissioner, the cost for each child was about $340.

Children aged 11 to 18 are accepted, and the camp typically takes up to 200 scouts per summer. This year, there are about 160 participants.

Maliszewskyj admitted that the program has seen lower participation in recent years due to competition from other camps and sports programming — be it over the summer sports or school sports that tend to begin practicing in early to mid-August.

“We’re still a relevant program, and one that I think can have a role in everyone’s life. We all see the value and we want to pass that value on,” he said.

“Scouting is a unique program because not only are we addressing needs for skills development, but it’s also a value-based program,” Maliszewskyj said. “Behind everything we do is a set of underlying principles to make. ... We are trying to build leaders of tomorrow with the people of today.”

“It teaches people how to manage on their own a little, and I think that’s really cool,” he said. “There’s always fun to be had here. Every year there’s a new story, good or bad ... [and] I’ve always had a blast here.”

On Tuesday, Violet spent her morning swimming and learning leather-working skills. She hopes that next year there will be more girls and that they will be able to stay overnight.

Eloise, 11, agreed, but was more focused on the week ahead and getting what she says is a much-needed break.

“I just wanted to have some new experiences and get away from home for a little [while], because my siblings are annoying,” she said.

Disappointing that the reporter didn't get facts straight on the girl's situation. Their accommodations were at camp ready, but they failed to provide two deep leadership required by BSA Youth Protection Training. Not the girls' fault, not the camp's fault. Pretty much everyone at camp knew (before this article) that they weren't staying because they couldn't get two adults to commit to the week. The reporter could have grabbed anyone in a green shirt and could have gotten that info. I was one of the cabin parents (what the girl's needed) for my son's troop and even I had heard about that when I got there. Unfortunate that with all that amazing things that could have been reported, this misinformation was highlighted.

A new era has dawned. Not a good one.

Then why even have have boy scouts and girl scouts anymore.

Two different organizations. Boy Scouts of America have 4 different programs that accept girls AND boys. Girl Scouts only accept girls. All of the programs are different from each other.

Good for them. I hope they have an enjoyable camp experience.

The less affiliated with the BSA you are, the better off you are.

Uh, boys should be allowed. This is discrimination. What about boys who think they are girls but are really boys?