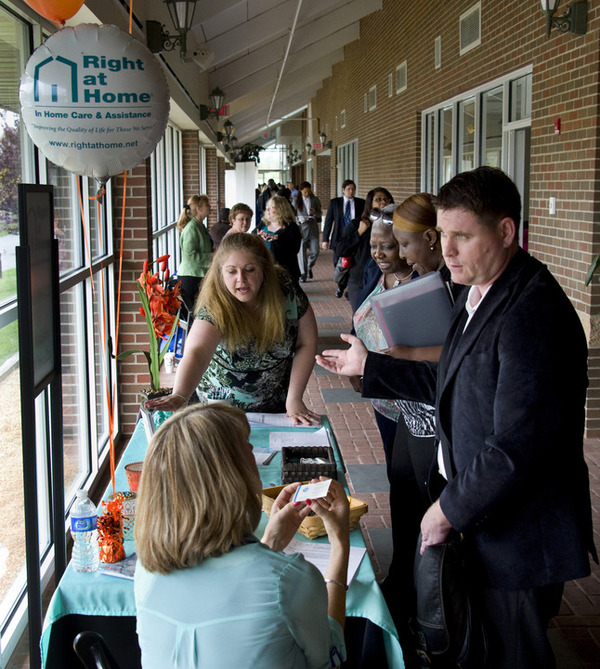 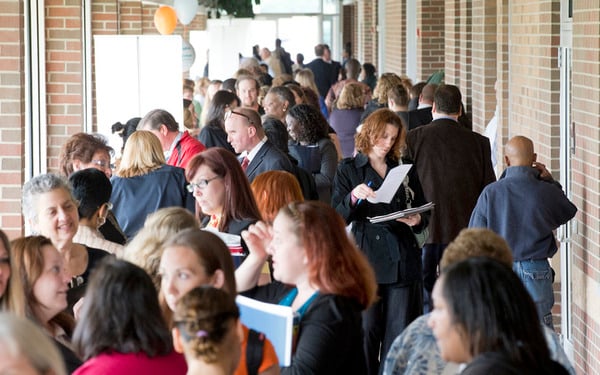 Brenda Whitney almost skipped Tuesday’s Frederick County Job Fair, but the Westminster resident decided to attend — and she left optimistic she would get a patient registration position at Frederick Memorial Hospital.

“She told me the particular job title I can apply for online, and she also let me know that new jobs are posted every Friday,” Whitney said. “A lot of times finding a job is about knowing where to get the information.”

Whitney was one of about 540 people who attended the fair at the Frederick News-Post building. More than 600 people registered online for the event.

“It was a wonderful experience, and I’m glad I came,” Whitney said. “I’m leaving encouraged.”

Patricia Espinosa has been using her two master’s degrees in psychology and counseling to work as an adjunct professor. The Monrovia resident left the job fair pessimistic about her chances.

“The only people who hire adjunct professors are colleges and universities, and only two were here,” Espinosa said.

Espinosa is changing course, working toward certification at the University of Maryland, Baltimore County that will equip her to design online courses, as many of her peers have done, she said.

“You can’t earn a decent living teaching unless you have a doctorate degree,” and getting one costs too much money, she said.

Espinosa credited Frederick County Workforce Services with helping her discover what she really wants to do through its Caps, Cops and Copes program.

Rebecca Mosiychuk could apply for administrative and customer service jobs online, but the New Market resident said she benefited from the job fair’s face-to-face interaction with prospective employers.

“I have two applications in, and they told me to apply online and call them within two weeks,” Mosiychuk said.

The drive from Harpers Ferry, W.Va., will have been worthwhile, Angela Cummings said, if she gets the administrative position she wants.

Cummings joined several other job-seekers in calling for more employers at next year’s job fair.

“I don’t know where they would put them, but more is better,” she said.

Twenty employers were in the job fair advertisement, “but I don’t believe all 20 were here,” Joann Parmiter said.

The job fair exposed Mary O’Connor to companies and agencies she had not heard about, including the Sparks employment service, the Mount Airy resident said.

Nothing is a waste of time if it leads to networking or employment, Frederick resident Lolita Huang said.

The job fair could have used a few more employers, Huang said, “but what they had was good. I like how they listed available positions,” which saved a lot of time.

Hagerstown resident Mike Mullinix, in search of a financial analyst-related position, said he had expected to see some bigger names, such as Lockheed Martin and General Dynamics.

Gail Healey fielded questions from some people who did not know what Boscov’s is, the department store’s human resources manager said, so being at the job fair was good community exposure.

“That’s in addition to being a good corporate citizen, which we are,” Healey said. “We got a lot of applications, and being here certainly was worthwhile.”

Boscov’s has positions in its clothing, domestic and furniture departments.

The fair had a great turnout, said Max Douge, Frederick County Workforce Services business and employment consultant, “and the employers were happy with the candidates, which is what we always look out for.”

Douge said he was a little concerned about the potential for congestion in The News-Post’s hallway, but employers and job-seekers should be credited for making slight adjustments to accommodate traffic flow, he said.

“No one was upset, and we had a good day, weather-wise, which lends to the atmosphere,” Douge said.

News-Post employees did a yeoman’s job directing traffic, which stretched along the end of Ballenger Center Drive, Douge said, and a return to the same venue next year has already been suggested.

The fair was sponsored by Frederick County Workforce Services, Frederick Community College and The Frederick News-Post.

Sorry I wanted to add a little more and hit the wrong button. But us being in the land surveying business (Eyott Inc.) is buzzer now then we ever have been so this is how we know the economy is bouncing back.So for all those employers out there be ready cause things are coming back around and it might be slowly happening but it is coming around and faster then we even thought.So every one just has to keep there faith and say prayers and all that showed up at the job fair will soon have a job I hope and praying for them.So Just everyone keep your heads held up high and a smile and think positive and don't give up on any dreams or any jobs. Keep checking back with employers keep on going to any where to fill out job applications.[smile]

I just wanted to suggest that maybe next year hold it at one of the buildings at The Great Frederick Fair Grounds. And hoping with a few little prayers that the economy is coming back and there will be more jobs to over.We have our own business and who is to say that next year if all goes great with the economy that we might even be there to hire some people. Only time can tell right now.As we own our own business as a land surveying company , we have gotten really busy and when this kind of business gets busy the way we have it is a good sign that the economy is coming back around and that should open up all kinds and types of jobs.I will be praying for everyone that is looking for a job and be praying that the businesses will hire the folks that showed up at the job fair. I know how it is to not have a job.I am handicapped and have not been able to work in 13 years.God knows I would love to work but when I get looked at walking with a cane and people find out you can't lift up stuff or carry stuff and when you can't sit for a long time or stand for a long time and they see my age of (50) something out the door even before you get out the door my applications go right in to the trash can.So this is my story and how I feel about the job fair and other things.I wish and I am praying for all to get a job and the employers to hire the folks that came out to the job fair.Best of luck to all.