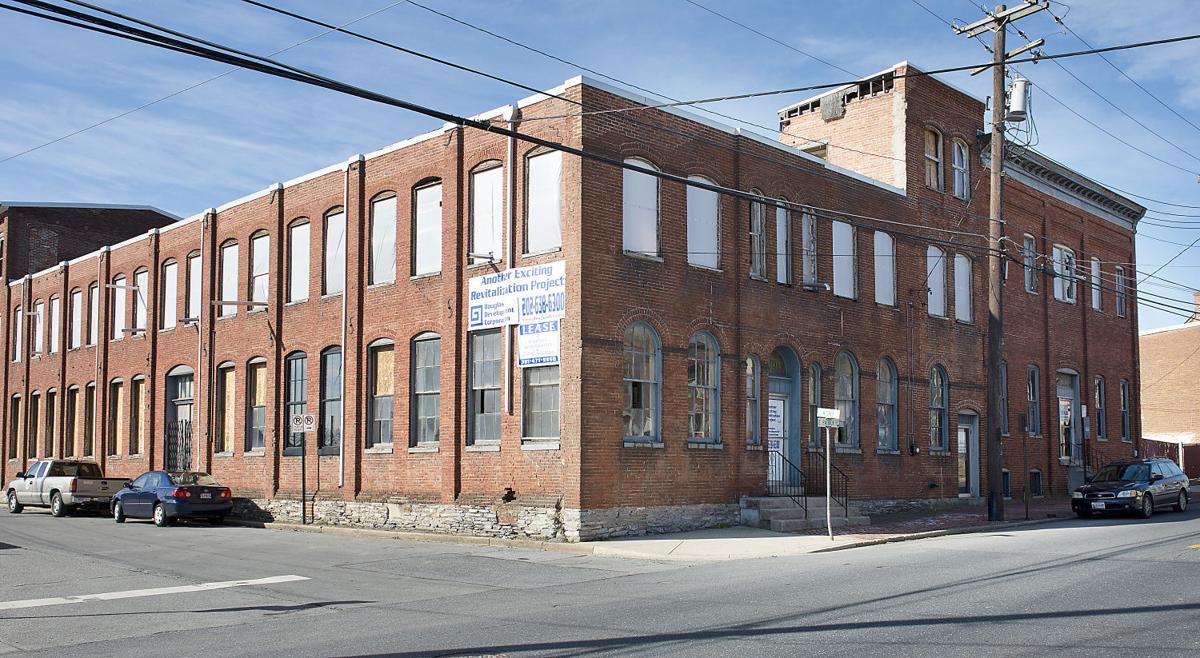 The Union Mills building at East Patrick and Wisner streets.

Union Mills, a long-vacant property on East Patrick Street, will soon be renovated into new office and retail space.

The Union Mills building at East Patrick and Wisner streets.

Union Mills, a long-vacant property on East Patrick Street, will soon be renovated into new office and retail space.

In warehouses on East Patrick Street about 100 years ago, the mission was simple: Produce perfect, dependable hosiery.

Union Manufacturing Co. was one of the largest employers in Frederick at the time, with more than 300 employees, according to city and state historical documents.

The property has been vacant for the last 12 years, but that should change soon.

The city of Frederick’s Planning Commission approved March 9 most of Douglas Development’s plan for the property, now referred to as Union Mills, at 340 E. Patrick St. The property also borders Carroll Creek, just east of East Street. The remaining parts of the plan will be considered for approval April 13 at the commission’s next meeting.

Douglas will first renovate the main warehouse at Patrick and Wisner streets to make room for an interested tenant, which could move in as early as the fall, said Jeff Whitman of GTM Architects, who designed the remodel. The tenant will take up about two-thirds of the new office space, Chris Smariga, of Harris, Smariga & Associates, told the commission members.

Downtown residents and businesses have been waiting for years for something to happen at the property. It has been vacant since Gilbert’s Restaurant Equipment & Supplies moved out in 2003; Gilbert’s is now farther east on East Patrick Street.

The property is along the portion of Carroll Creek that the city is developing now as it extends the features of Carroll Creek Linear Park. Union Mills is one of a few development projects planned for the area.

Bob McCutcheon, who owns McCutcheon’s Factory Store just across the creek on Wisner Street, plans to expand his business after the work on the creek is complete.

“I think that’s great we are getting development started,” McCutcheon said. “Having them develop over there is going to help us a lot because it shows things are happening over here.”

The renovations have been a long time coming. Douglas had another plan approved for the site in 2008 or 2009, but when the economy tanked, that plan was scrapped, Whitman said.

Douglas has since scaled back the plan and decided to renovate in phases, he said. After the corner of Wisner and Patrick streets is complete, renovations will occur on the rest of the property, including along the creek.

Union Mills is outside the Frederick Town Historic District, so the property owners aren’t required to follow the city’s preservation rules. Still, Whitman said the plan is to retain the historic nature of the building.

The only portion of the building that will have a more contemporary design will be the third-floor addition, which will have distinct steel and metal paneling, he said.

As the city of Frederick wraps up its part of the Carroll Creek Linear Park project, plans for who will build the final portion of the park im…

Nobody beats The Wiz.

How about recreating Boston's
Faneuil Hall there?

"Union Mills is outside the Frederick Town Historic District, so the property owners aren’t required to follow the city’s preservation rules. Still, Whitman said the plan is to retain the historic nature of the building."

They must be forgetting the 50 year rule. The HPC can look at all aspects of historical integrity outside of the HPD and enforce regulations as if it were in the protected area. This happened with the last terms Council.

Yippee! I have always thought this building was an architectural treasure and was hoping Douglas would get around to restoring it. Now, if Douglas would finally do something with his empty row of buildings on Market Street! Jean

Had a sister in law who worked there many years too. Too nice a building to let set.Use it.