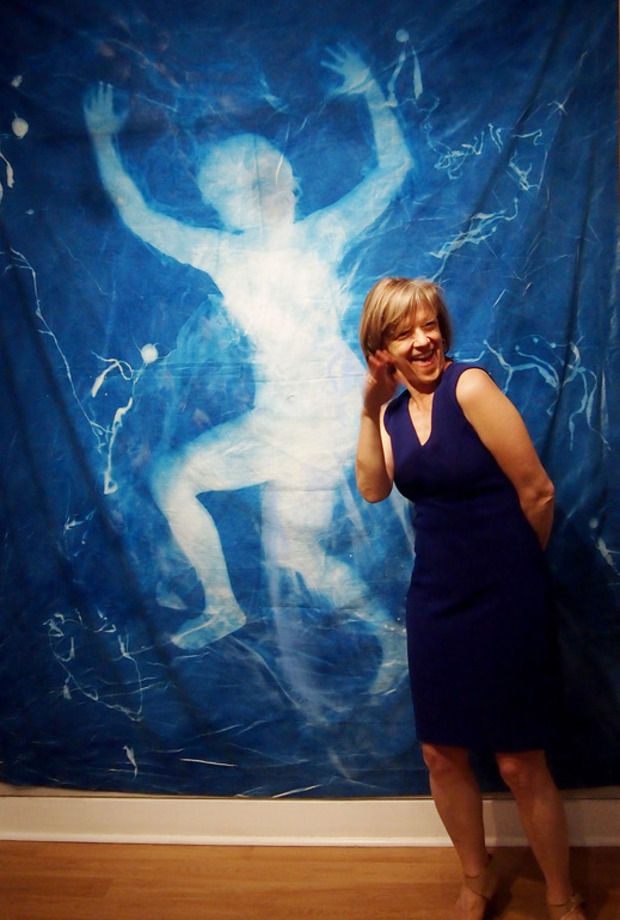 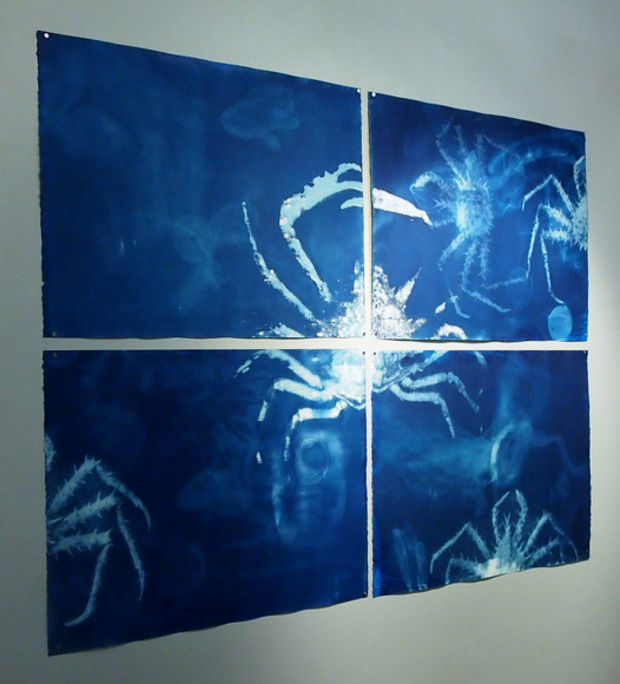 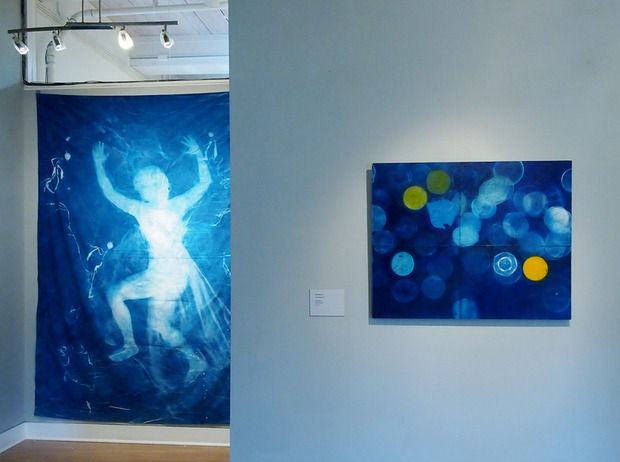 "Dressed to Kill" and "Currents II" on view in "Tangled Up in Blue" show at Delaplaine Arts Center, Frederick, MD. August 2014 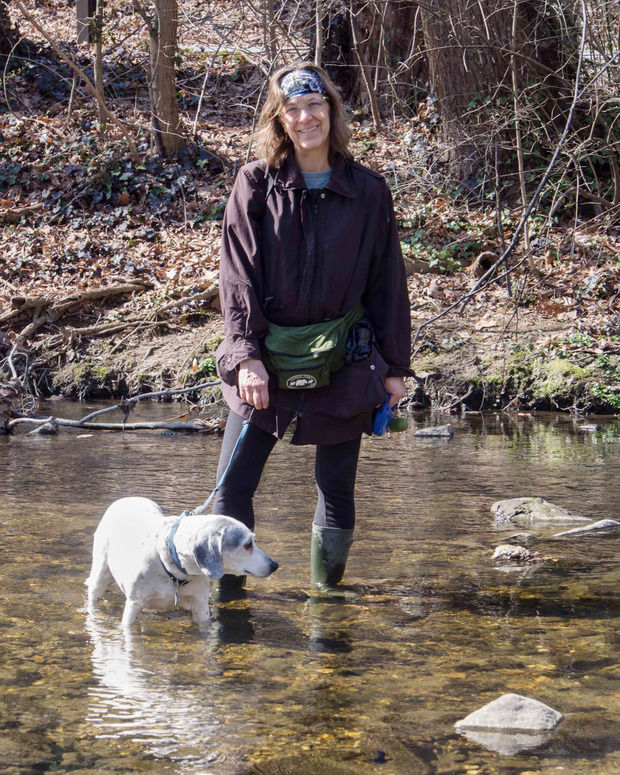 Marty Ittner and her dog Megan in Sligo Creek 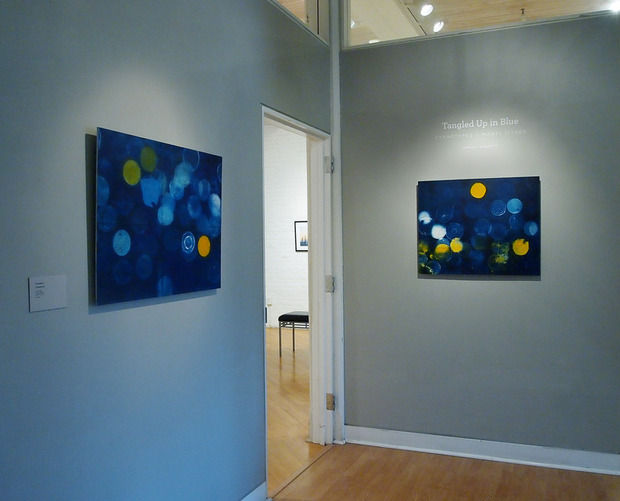 "Currents" I & II, cyanotype and oil paint on nautical charts 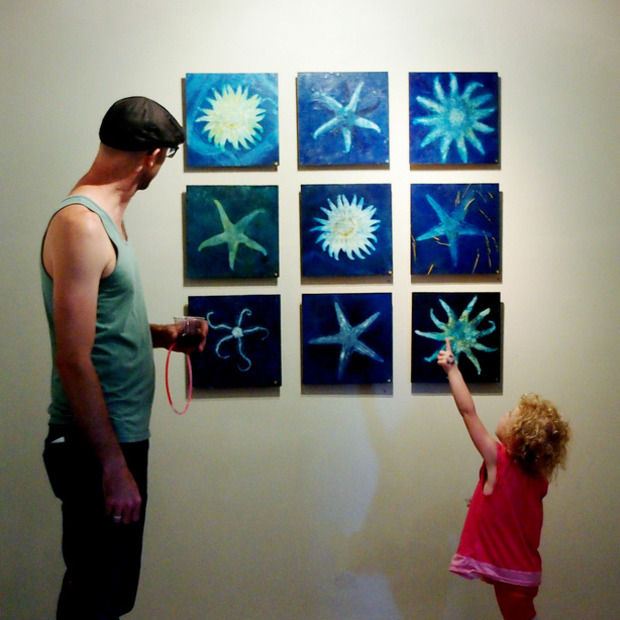 "Dressed to Kill" and "Currents II" on view in "Tangled Up in Blue" show at Delaplaine Arts Center, Frederick, MD. August 2014

Marty Ittner and her dog Megan in Sligo Creek

"Currents" I & II, cyanotype and oil paint on nautical charts

Marty Ittner stood in front of her piece “Dressed to Kill,” a large cyanotype on exhibit at the Delaplaine, one in which she became the subject. For it, she lied on the ground and allowed the paper to expose in the sunlight, leaving her silhouette, surrounded by delicate, almost ghostly strands of kelp, which she’d brought back in her suitcase from a trip to California.

In so many ways, her simple statement, while paradoxical, was thematic for her first solo show, “Tangled Up in Blue”; the small things we do or don’t do have a big impact on the Earth.

The show, which runs through Sunday at the Delaplaine Visual Arts Education Center, is comprised primarily of cyanotypes (also called sunprints), a photographic process that uses sun-sensitive treated paper to create silhouettes of objects when they are placed on the paper and exposed in UV rays, resulting in a blueish print. The prints are then developed in a water bath.

The blueish hues, plus most of of the pieces being images of sea creatures, gives the whole room an oceanic feeling while making a statement — literally, subliminally, subtly — about the trash that ends up in our waters. Because the creatures in these pieces were either created with or surrounded by cyanotypes of trash.

Several of the objects she chose to use for the cyanotypes are pieces of plastic she’s found — from drink lids on the street to plastic bottles in Sligo Creek near her home in Takoma Park (she also organizes creek cleanups there).

Before the interview, she had lunch with a friend, who questioned why Ittner picked up a plastic bottle from the ground during their walk to the Delaplaine. It’s basically second nature to Ittner now — picking up plastic bottles. In fact she makes a point of picking up at least one a day.

A longtime graphic designer, Ittner came at the exhibit from that background. She saw the space and built a body of work around it, not typically the case unless an artist is creating a site-specific installation.

“I’m coming back to the art late in life,” she said.

She typically makes small encaustic paintings, and while some encaustic work is in the exhibit, the pieces are mostly cyanotypes and very large, some taking up an entire wall. One, a long vertical piece that has the same title as the show itself, “Tangled Up in Blue,” resembles a jellyfish but is a sunprint of plastic sheeting and was designed to hang over a window in the gallery, which is now hidden from view.

She wanted the exhibit to first be about aesthetics, and the show — and Ittner — doesn’t come across as preachy, but there is a message, and she’s provided some literature to go with the show to inform people (think startling statistics, like the top 10 items found in our oceans — the No. 1 being cigarette butts/filters, at 2,117,931). These facts, as well as notes on her process and art background, were incorporated into a guest book she made (Ittner is also a bookmaker).

The exhibit exposes “the final resting place of our plastic waste that co-mingles with and entangles marine life,” Ittner wrote in an artist statement.

Diane Sibbison, exhibits manager at the Delaplaine, said she noticed children in particular responding enthsiatically to the show, several writing notes in the guest book — “We cleaned up trash from the river. Just that can help. ALOT” (sic), written in children’s handwriting.

They seemed to get the message while appreciating the beauty of the art.

Interestingly, creating the pieces brought Ittner closer to nature not only through the objects she was using but through the process of creating cyanotypes.

“I was really in tune with the weather,” she said.

There is a small window of time each day, a few hours, where she could get direct overhead sunlight to create the prints, which only take a couple minutes to expose.

In other pieces, she used printmaking, blowing up images of starfish and crabs and combining that with cyanotypes. In “Blue Crap / Blue Crab,” a printed crab is seen surrounded by cyanotype silhouettes of floating trash — plastic sheeting, drink lids, a latex glove, a plastic bottle.

“The irony is when it gets into the ocean, sea creatures think it’s something to eat,” she said. “It’s beautiful but it’s lethal.”

For more on the artist, go to www.martyittner.us.

What: “Tangled Up in Blue,” cyanotypes by Marty Ittner