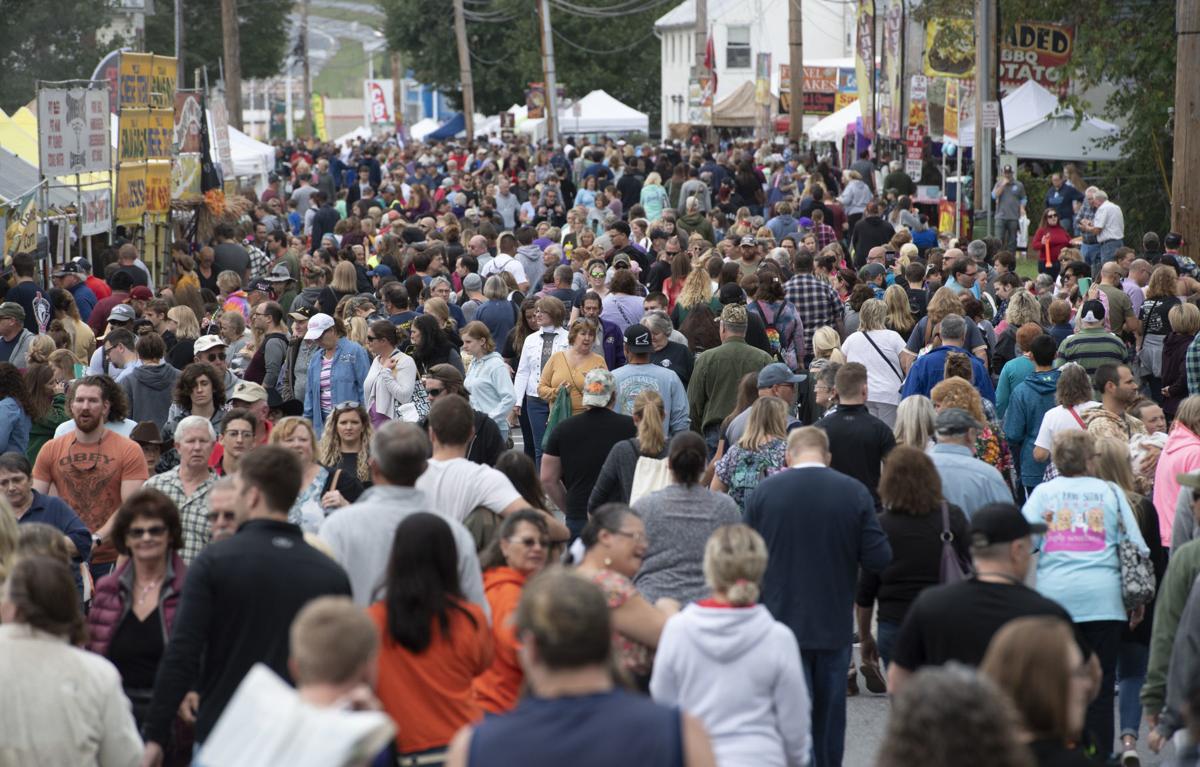 A mass of visitors decended on Thurmont Saturday for the annual Colorfest, shown here on Frederick Road. 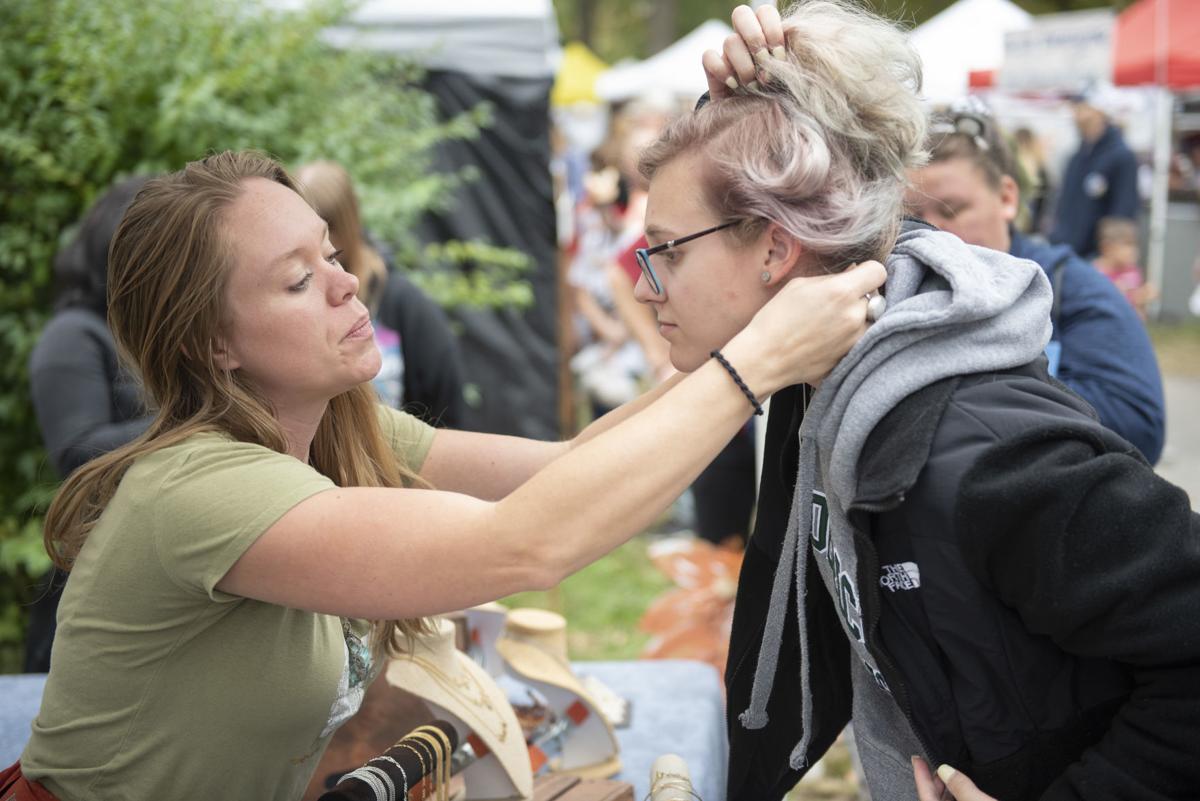 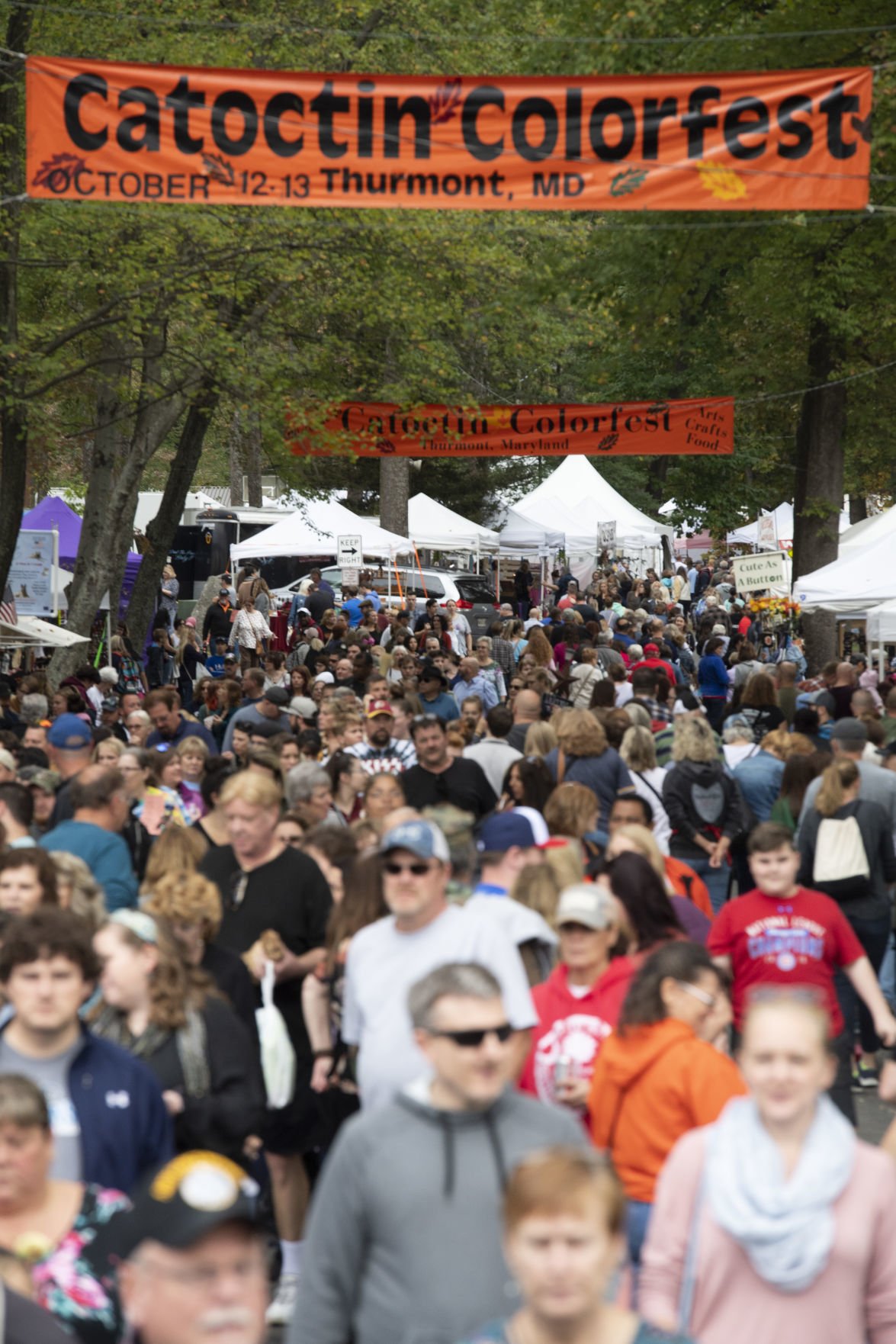 Visitors to the annual Colorfest are shown in Thurmont Park, which was lined with vendors. Colorfest continues Sunday.

A mass of visitors decended on Thurmont Saturday for the annual Colorfest, shown here on Frederick Road.

Visitors to the annual Colorfest are shown in Thurmont Park, which was lined with vendors. Colorfest continues Sunday.

It’s 8:25 a.m. on Saturday morning when Thurmont Mayor John Kinnaird steps out of the business he owns, R.S. Kinnaird Memorials. He’s about to head out to retrieve a golf cart that will act as his transportation for the day.

It’s not an exaggeration, then, to point out the obvious: This is probably the most famous that Kinnaird’s town gets each year, even if this only ranks as the second biggest day on the calendar to its mayor (he’s partial to the Christmas celebration in December for what he calls “personal reasons”).

“It’s pretty damn exciting,” Kinnaird says with only a tiny hint of reverence. “This benefits the whole community. For some, it’s the single largest fundraiser of the year.”

He explains this as he rides his golf cart, complete with a Beatles playlist, through the first stop on the Colorfest tour, the area of booths near the town’s Guardian Hose Fire Company. As he rides, he points to vendors, explaining that this year, approximately 900 of them signed up.

Nary a second passes without Kinnaird having to respond to someone saying hello. If 6,000 people call Thurmont home, it seems as though at least 5,999 of them know and like their mayor. At one point, he stops to talk to police chief Gregory Eyler, who playfully refuses comment once he realizes someone from the newspaper is in his presence.

Eventually, Kinnaird turns his golf cart into the section of Colorfest where everything on display is juried. As he rides into Thurmont Community Park, he notes that he expects 30,000-40,000 people to visit his town this weekend. As the morning unfolds, that number wildly inflates depending on the person you talk to, but the mayor insists he likes to keep the estimation on the low end.

“Every square inch of this town is used for something,” he says, referring to the vast amount of booths set up for the weekend. “So, the number is always subjective. It’s impossible to count them all because people can enter from anywhere.”

Even so, for such a small town, the event racks up big numbers. Most vendors pay about $65 or $70 per vendor space, Kinnaird said. But that excludes the food booths, which could go as high as $2,000 per space, if the business rents a section on, say, someone’s front lawn to sell its goods. Also, for every car that pays to park, the town receives $2 of the $10 fee. That money, he says, goes to the $79,000 that Thurmont spends in security and sanitation alone.

None of those numbers matter now, however, as the crowd continues to amass and he enters what he calls “ground zero” of the festival, the park. He almost immediately looks for Carol Robertson, the president of the Catoctin Colorfest portion of the festivities.

While she’s been president for about a decade, she’s also been up since 6 a.m., which pales in comparison to Kinnaird, who’s been out and about since 2 a.m. That said, the weekend means as much to her as it does to anybody else, and she proves it as she nearly breaks down while talking about her favorite moments.

“When we open up and see the sea of people here,” Robertson says, tears formulating behind her eyes, “I know I just threw one heck of a party again.”

And the framework for that party doesn’t come together overnight. Even as she speaks Saturday morning, she’s already focused on accepting applications for next year’s event, the 57th installment, which is scheduled for Oct. 10 and 11. Before then, of course, there are donations to be made — she estimates that the Catoctin group gives about $20,000 away each year as a result of the event, helping out everything from Thurmont’s food bank to its fire company.

Later in the morning, Kinnaird will reiterate the importance of those donations to his town. For now, though, as he exits the park and heads back toward his business, he offers to make a donation of his own. Slowly creeping his cart through the crowd, a woman working for one of the vendors shouts to him, asking if he knows where she could buy a pair of socks.

“There’s a Dollar Store and a Dollar Tree,” he begins, before stopping himself.

“You know what?” he says to the woman. “How about I just bring you back a pair of socks.”

The woman tries to give him money, but he declines. Instead, he says, the act of kindness falls right in line with what Colorfest is supposed to be about: Providing patrons with a family-friendly affair while raising money for dozens of causes throughout the area.

“It helps out everybody,” he says about Thurmont’s most beloved tradition.

“Then, after this,” he adds with his trademark humor, “we all return to our zombie-like conditions.”

His foot then returns to the gas pedal as he reveals his duties for the rest of the morning: Picking up elderly couples who need a lift from their cars down to the action.

“You see,” he asserts with his Santa Claus-esque smile, “that is what the mayor does.”

And off he goes.

For the first time since 2015, the town of Thurmont operated the annual Colorfest at a slight deficit in October after a few years of profits …

As a juried vendor, I have known Carol Robertson for several years....she’s one classy, energetic lady. Love her comment on throwing one heck of a party.......and that she did!!

I used to avoid Thurmont like the plague because of the mess this festival creates, never once attending it. My wife and I now live less than a ten minute walk from the park where it's held, have for the last seven years, and we still haven't attended it. It may bring income to the town (which I understand is minimal after expenses,) and to all the vendors and townsfolk who hold the hundreds of yard sales, but it means nothing to us and we still avoid it.

aren't you a peach.

And what is that supposed to mean?