You have permission to edit this article.
Edit
Home
News
Opinion
Sports
Topics
Calendar
Classifieds
Features
Become a carrier
1 of 9 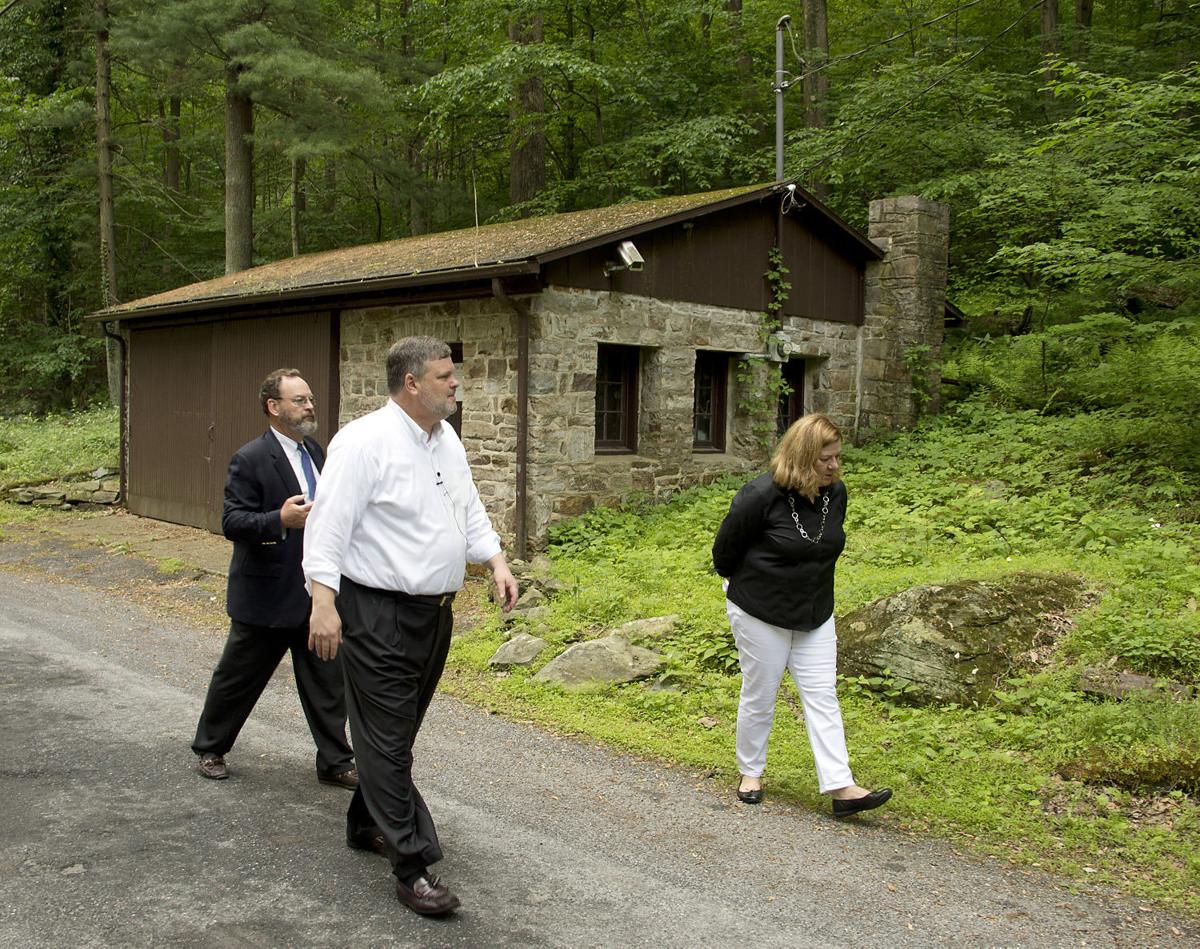 Walking in front of a garage building at Trout Run on Catoctin Hollow Road during a tour Wednesday are, from the left, Michael Proffitt, of Proffitt & Assoc. Architects; attorney Bruce Dean; and Kathryn M. Kuranda, of R. Christopher Goodwin & Associates historical and architectural services. 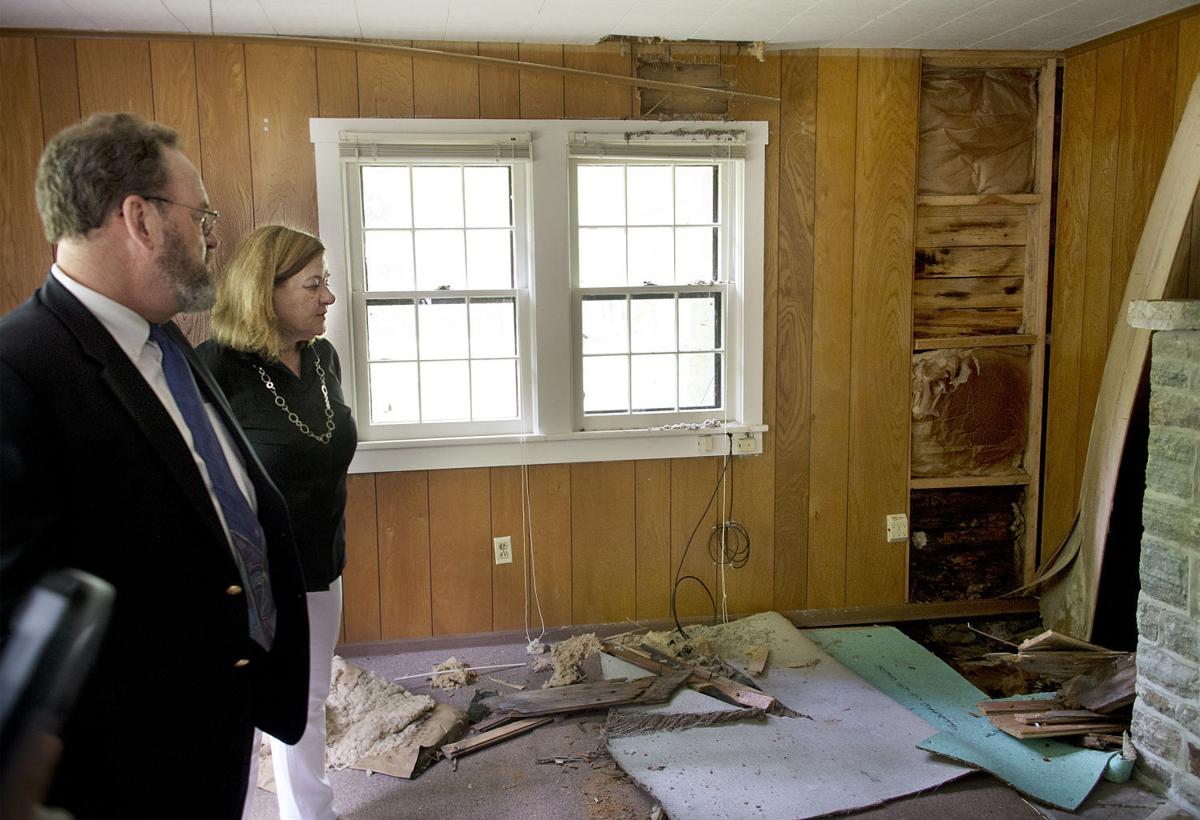 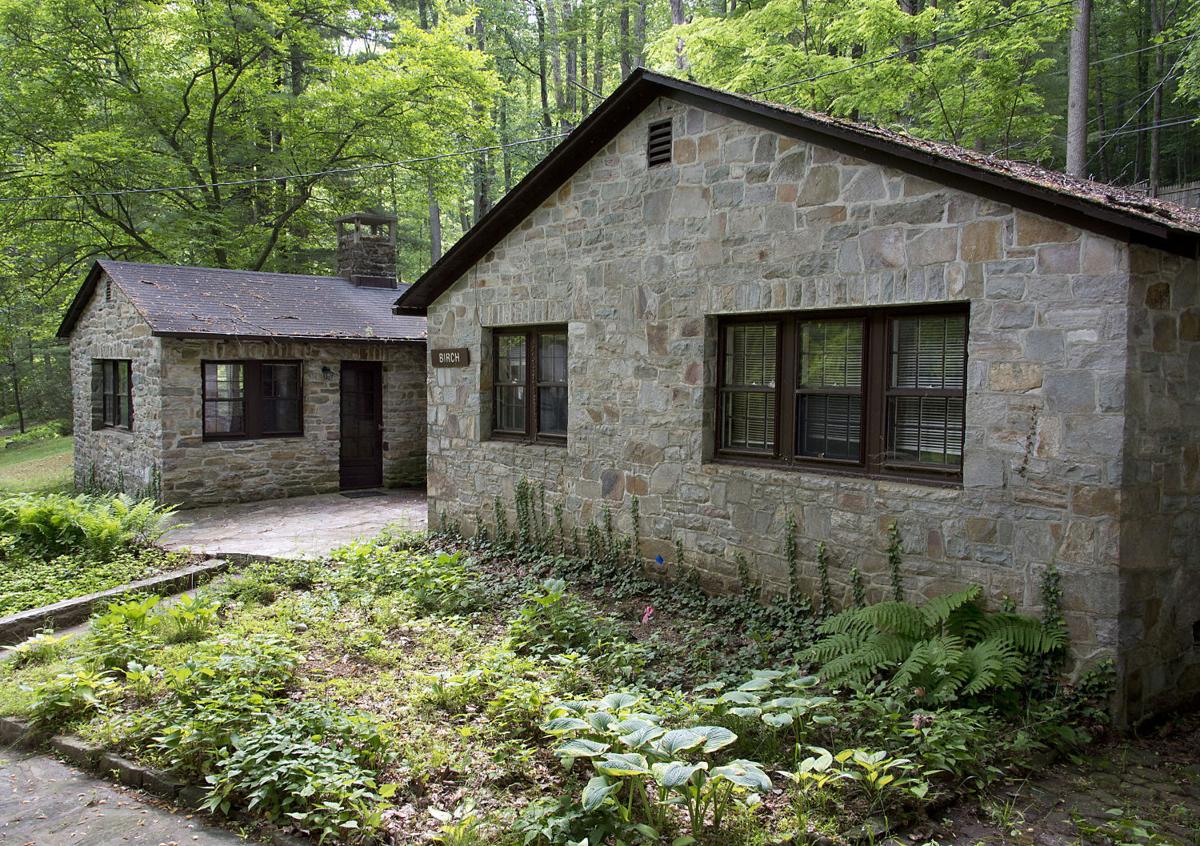 Pictured is the stone cabin labeled “Birch” at Trout Run. 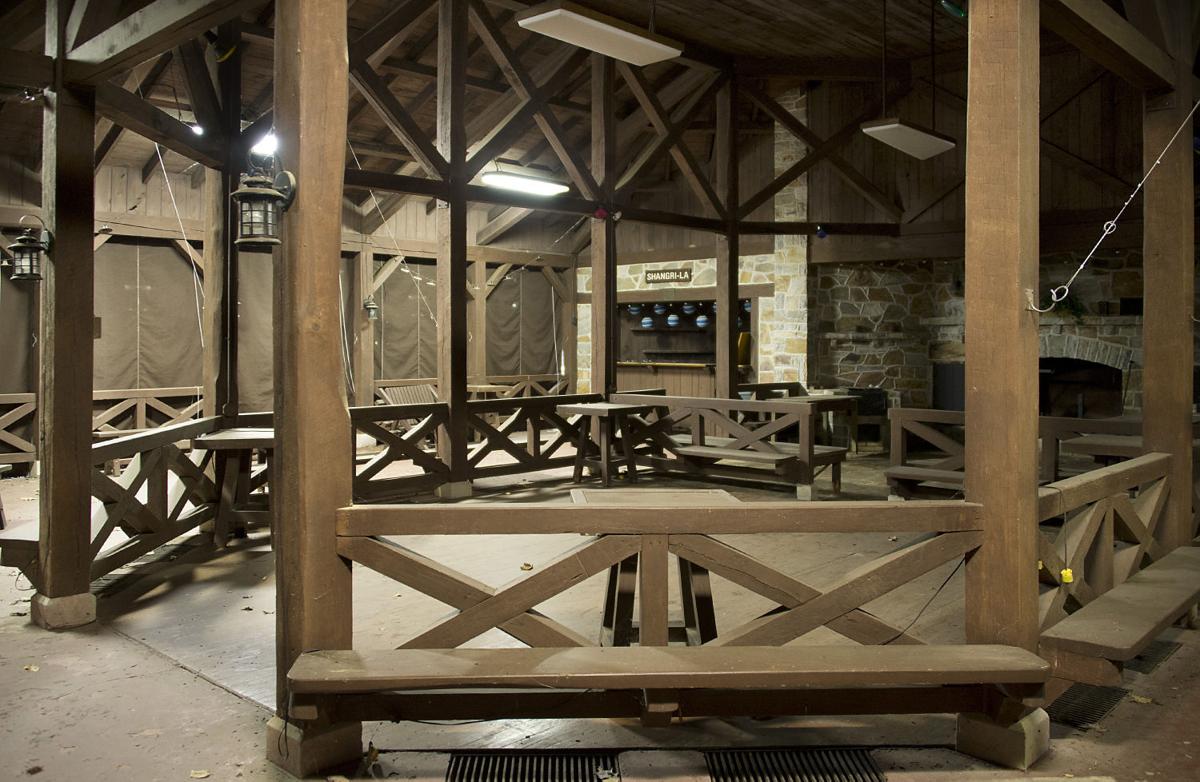 Pictured is the interior of the outdoor pavilion at Trout Run. 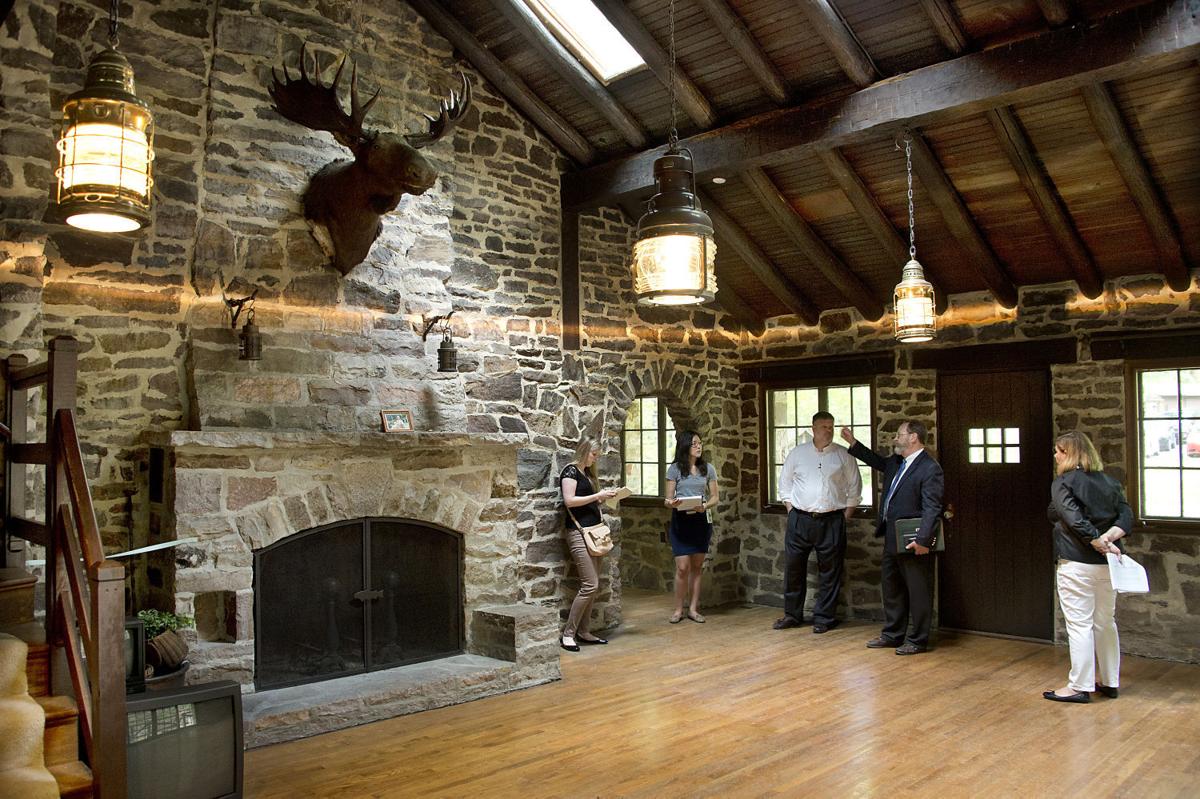 Pictured is the main room in the main lodge at Trout Run that was built in 1932. 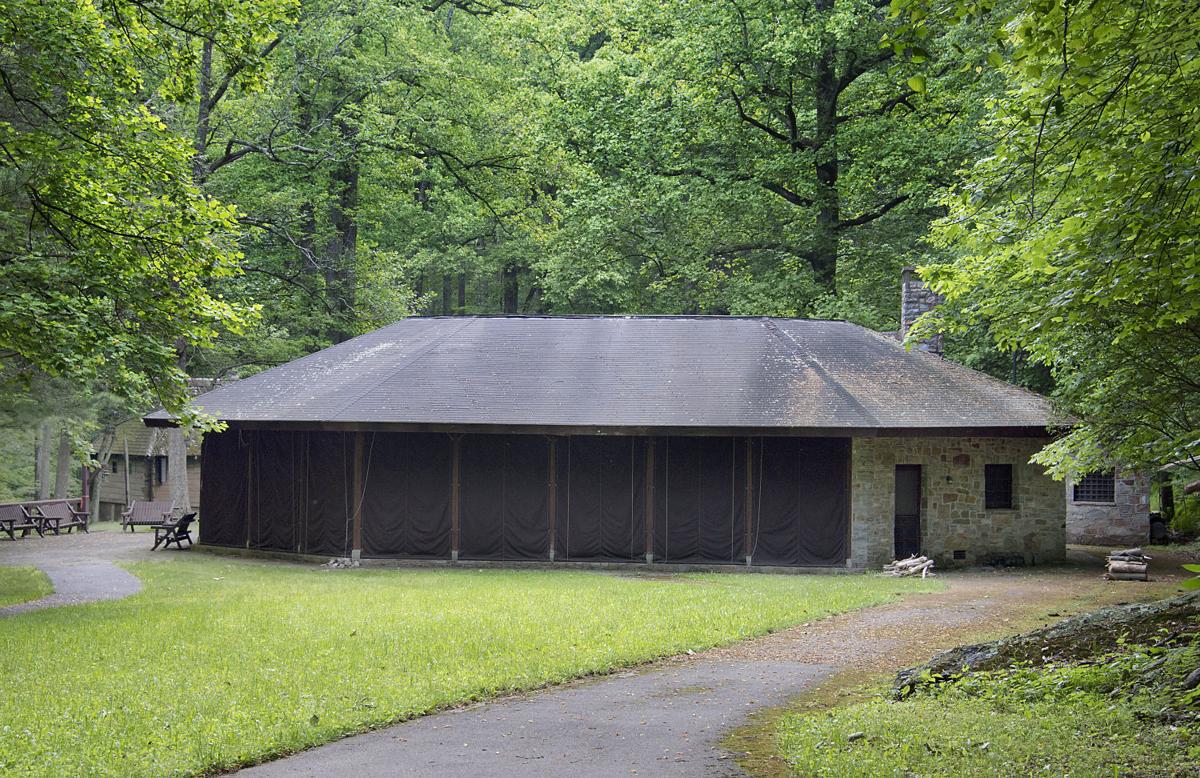 An outdoor pavilion at Trout Run. 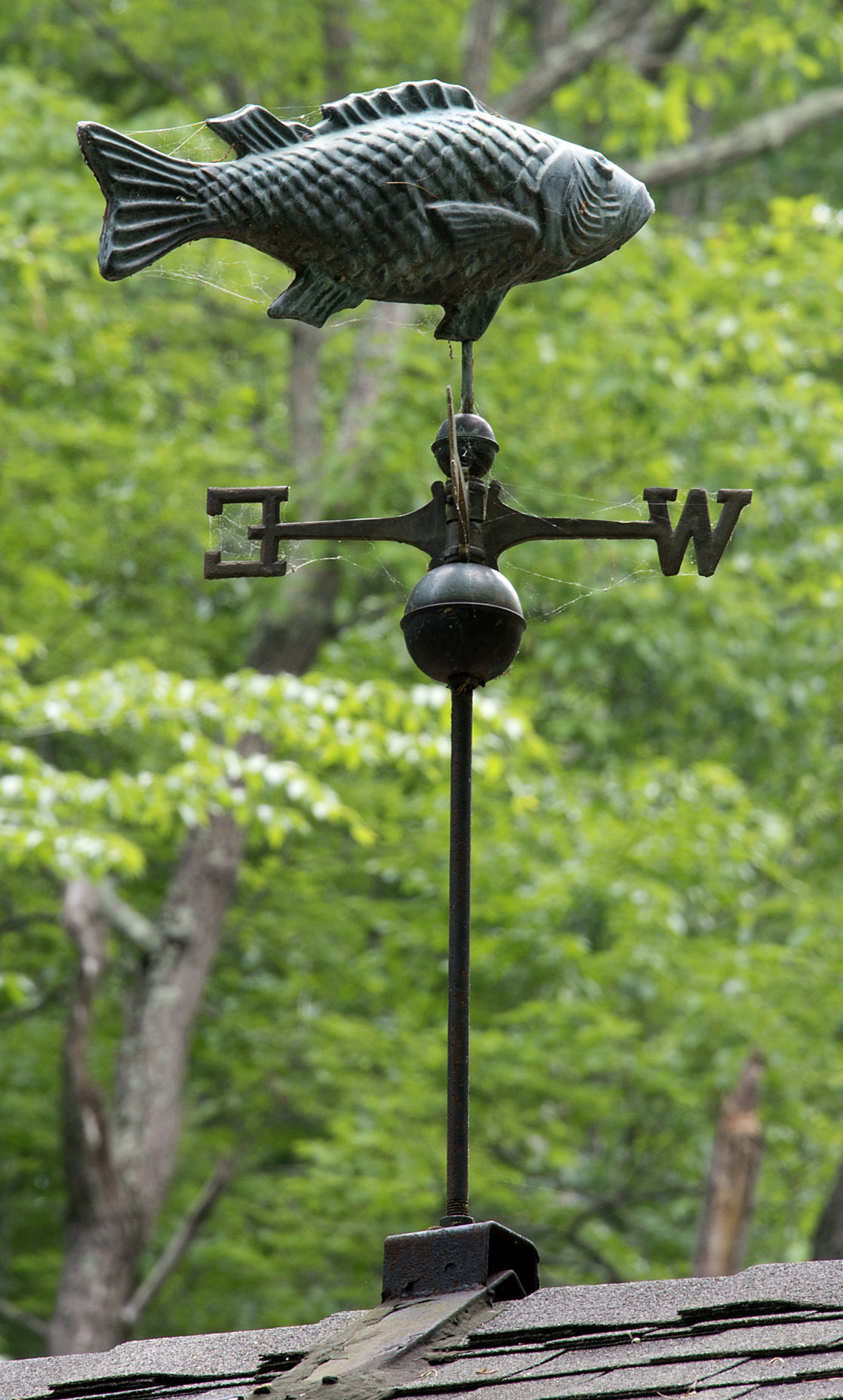 A trout weather vane sits atop the main lodge at Trout Run. 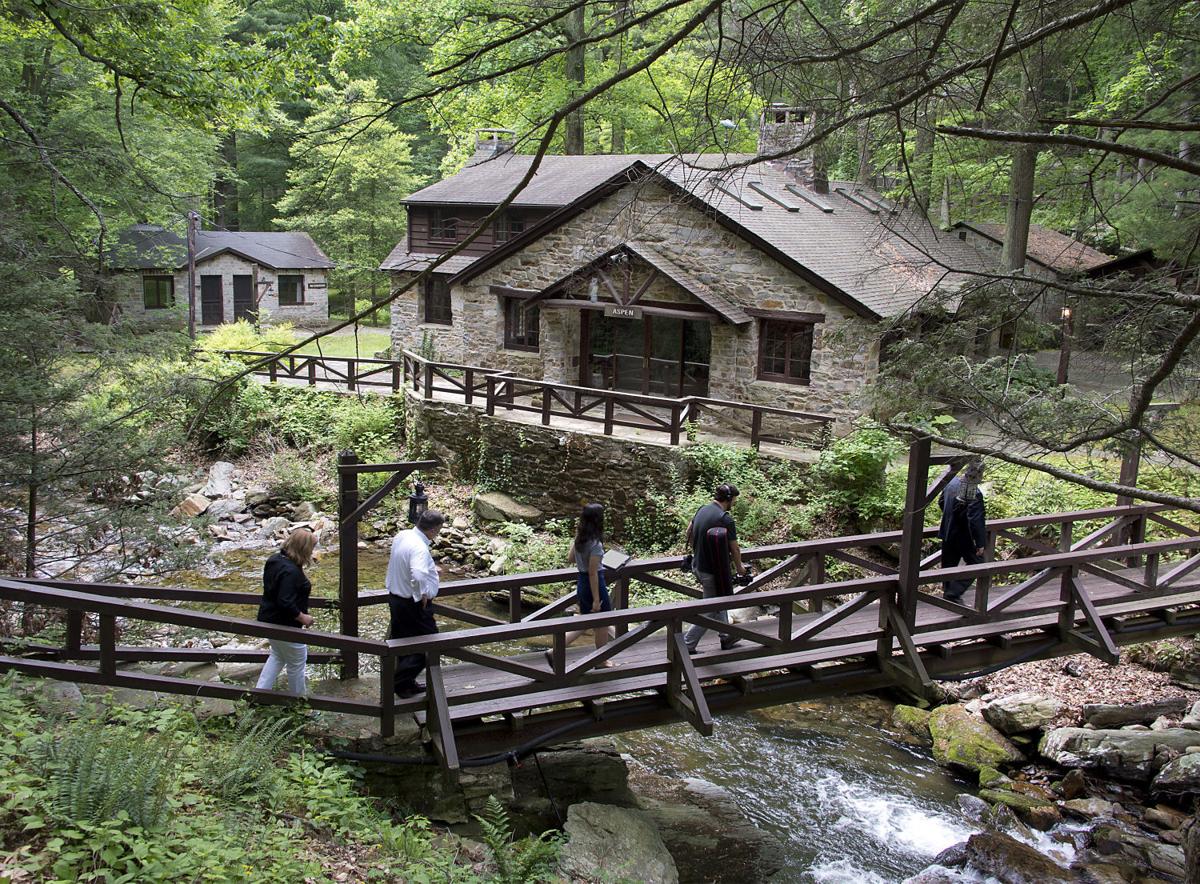 Pictured is the view from the stone cabin named “Dogwood” looking out on the main lodge, labeled “Aspen,” at Trout Run. The bridge over Hunting Creek was built in 1980 and has a sign dubbing it the “F.D.R. Bridge.” 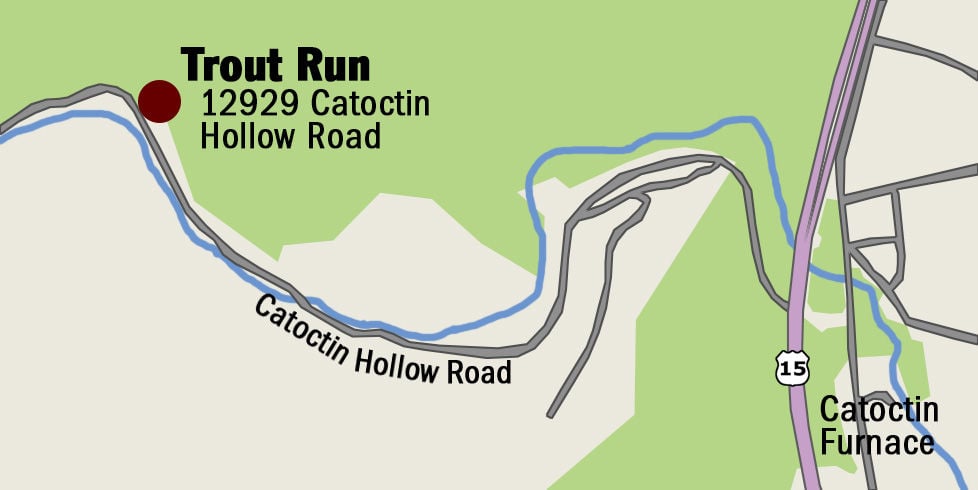 The 40-acre Trout Run campus is in the forest of the Catoctin Mountains.

Walking in front of a garage building at Trout Run on Catoctin Hollow Road during a tour Wednesday are, from the left, Michael Proffitt, of Proffitt & Assoc. Architects; attorney Bruce Dean; and Kathryn M. Kuranda, of R. Christopher Goodwin & Associates historical and architectural services.

Pictured is the stone cabin labeled “Birch” at Trout Run.

Pictured is the interior of the outdoor pavilion at Trout Run.

Pictured is the main room in the main lodge at Trout Run that was built in 1932.

An outdoor pavilion at Trout Run.

A trout weather vane sits atop the main lodge at Trout Run.

Pictured is the view from the stone cabin named “Dogwood” looking out on the main lodge, labeled “Aspen,” at Trout Run. The bridge over Hunting Creek was built in 1980 and has a sign dubbing it the “F.D.R. Bridge.”

The 40-acre Trout Run campus is in the forest of the Catoctin Mountains.

The ramps beside the stone steps were not built for President Franklin Delano Roosevelt’s wheelchair.

No president ever slept in the retreat’s stone-walled cabins.

The name “Trout Run” was not its first name and likely won’t be its last.

The 40-acre site at 12929 Catoctin Hollow Road near Thurmont has been shrouded in more fiction than fact during the past few months it’s spent in the spotlight.

While dozens clamor to weigh in on the County Council’s decision regarding the site, and a handful of paid representatives work to quash rumors, one voice speaks from decades of experience.

“To me, that place was like my own home,” said Louise Barry.

She was the caretaker for the property from 1981 until 2012, but she knew it as Little Hunting Creek Lodge.

President Dwight Eisenhower fished there, and his wife, Mamie Eisenhower, stayed at Trout Run. But the president never slept there.

A wooden bridge across Little Hunting Creek, built by Barry’s brother-in-law, currently bears a sign with the name “FDR Bridge.”

The bridge was built in the 1980s, Barry said — Roosevelt never saw it.

As for the ramps built into the stone walkways, Roosevelt never saw them either. They were built for the use of electric and gas golf carts, Barry said.

Howard Haugerud, the owner who sold the site to Narconon’s representatives, put up signs and planted tall tales to increase the property value, Barry said.

“It’s all wrong, because it’s not historic in the first place,” she said.

In the 1920s, Lancelot Jacques owned a large portion of land in the Catoctin Furnace area. According to a written account by former caretaker William Renner, Jacques knew President Herbert Hoover liked to fish, so he met with him about the trout stream on his property, known as Little Hunting Creek.

Lawrence Richey, Hoover’s personal secretary, bought more than a thousand acres of the property along the stream so that his boss could fish in a tranquil, remote area.

The main lodge at Trout Run was built in 1932, according to Renner, and it was named Richey Lodge.

The stone-walled lodge has skylights, a stone fireplace, deer and moose heads mounted high on the walls and a carpeted room upstairs.

Michael Proffitt, a Frederick architect who is coordinating the renovation for Narconon’s proposed drug rehabilitation center at Trout Run, said the lodge will be a main office and social center, with sleeping quarters for female clients.

Richey sold a 450-acre patch of the mountain, including Trout Run, to Floyd Akers in 1945.

Akers had the rest of the stone cabins, which are smaller than Richey Lodge, and the stone pathway and ramps built. An outdoor barbecue, garage, laundry house and bathhouse complement the living quarters.

The site remained much the same until the early 2000s.

In 2003, Haugerud held an auction, with the property listed at $20 million.

Bidders and visitors gathered, but he called the auction off about half an hour after it was scheduled to start.

“I didn’t think there was enough money there,” Haugerud told The Baltimore Sun. “I really don’t want to sell it anyway, but I’m getting so darn old.”

In 2013, then-89-year-old Howard Haugerud, managing partner of Trout Run LLC, sold the 40-acre property to West Coast Property Investments Inc. for $4.85 million after it spent years on the market.

West Coast Property Investments Inc., identified on the deed as “a Delaware corporation,” signed the purchase contract and applied for a special exception for the property’s use, then turned the site over to Social Betterment Properties International. Social Betterment is owned by the Church of Scientology.

Narconon is a drug rehabilitation program that receives donations from the Church of Scientology, according to church director Sylvia Stanard. The Narconon program uses literature and research by L. Ron Hubbard, who is also the founder of the church.

Yvonne Rodgers, executive director of Narconon East U.S., said Narconon would like to open a residential drug rehabilitation center at Trout Run because the site is “quiet, private and peaceful.”

Residents of the drug rehabilitation center would “participate in recreational and therapeutic outdoor activities such as fishing, hiking and swimming on its grounds,” though signs currently on the property say fishing is not permitted.

Traffic to and from the site would include weekly delivery of food and other supplies, staff commutes and family visits on Sundays, according to the application.

“The proposed use of Trout Run as an alcohol and drug abuse treatment facility is a low-impact use that is in harmony with the character of the area,” the property owner’s application states.

Proffitt said the bulk of the proposed changes to the site would be to the buildings’ interiors, to fix rotten floors and cracked walls and to install wheelchair-accessible bathrooms.

All exterior changes would need to be approved by the county’s Historic Preservation Commission. Proffitt said they would need to elevate the stone walkway and remove the steps in front of some of the buildings to make them wheelchair-accessible.

The site’s septic system would also need to be updated for the increased residential population, which would require replacing an existing pool with a septic holding tank system.

Richey Lodge currently bears the name “Aspen,” reminiscent of the president’s cabin at Camp David a few miles away, but the sign wasn’t put up by any of the owners.

It was created by the production team for the television show “The West Wing” in 2004. Similar wooden signs, including “Redwood,” “Dogwood” and “Birch,” were attached to each of the stone buildings and the pavilion, whose sign reads “Shangri-La.”

Haugerud “just decided to leave the signs up,” Barry said.

If Narconon gains approval for its plan, the pavilion would be sealed with glass panels on all sides, creating an interior dining space. The kitchen would be expanded, Proffitt said, but the pavilion’s footprint would stay the same.

The chalet down the winding stone path would be a sleeping area for male clients of the Narconon program, and the four-car garage across the street from the main gate would be enclosed to become staff office space.

No buildings would be demolished, Proffitt said.

Barry, who still lives near Trout Run, speaks with resignation when she thinks about the site that could one day become a Narconon center.

“I really did love that place,” she said.

Today, the fate of Narconon’s proposed drug rehabilitation center at Trout Run may be decided, but the controversy about the center’s associat…

A substance abuse rehabilitation center associated with the Church of Scientology will not be able to open at Trout Run, a 40-acre property in…

Frederick County Council members say the vote they are scheduled to make Tuesday isn’t about whether to allow the Church of Scientology, or it…

How can ThorpeWood, just down the road, operate and Trout Run is being blocked? If ThorpeWood can then Trout Run should too.

One of the differences is probably that Thorpewood did not try to attain tax exempt status and did not attempt an historical designation! Another reason is (according to a Real Property zoning search), Thorpewood is zoned Resource Conservation (RCC), and if you look at the zoning ordnance, what they are doing with the with the property is an allowable use.

I guess that kills it! But, if put to a vote, Kirby should not be allowed to vote on it and later bid any contracts rewarded.