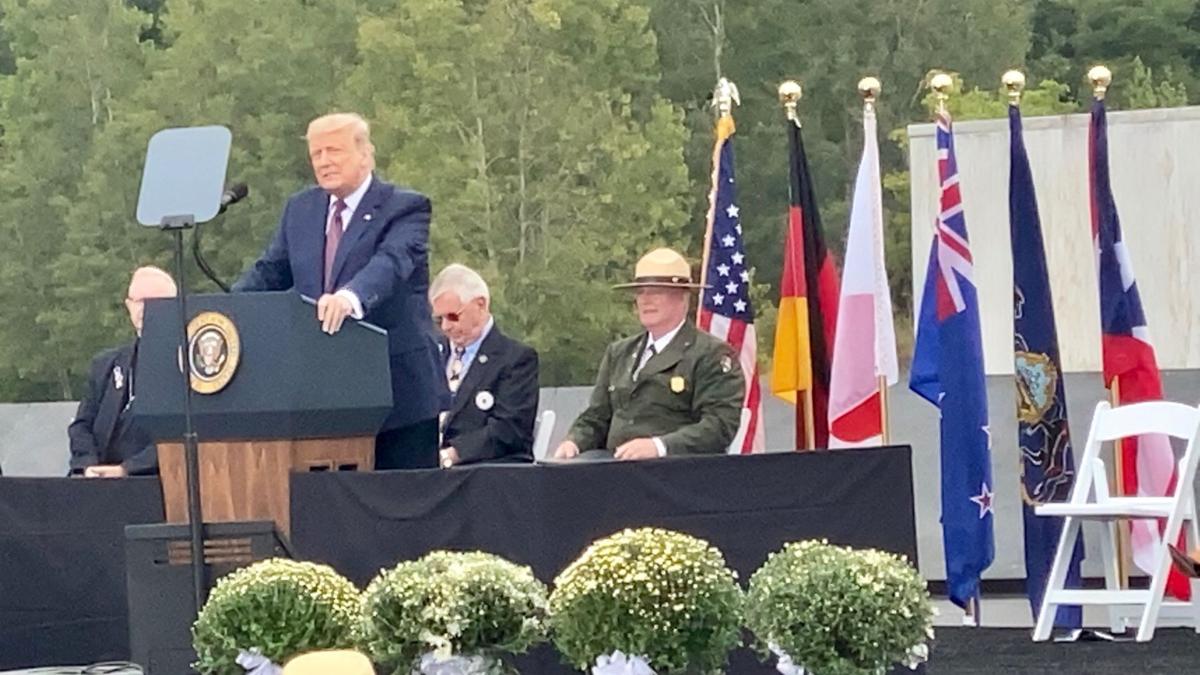 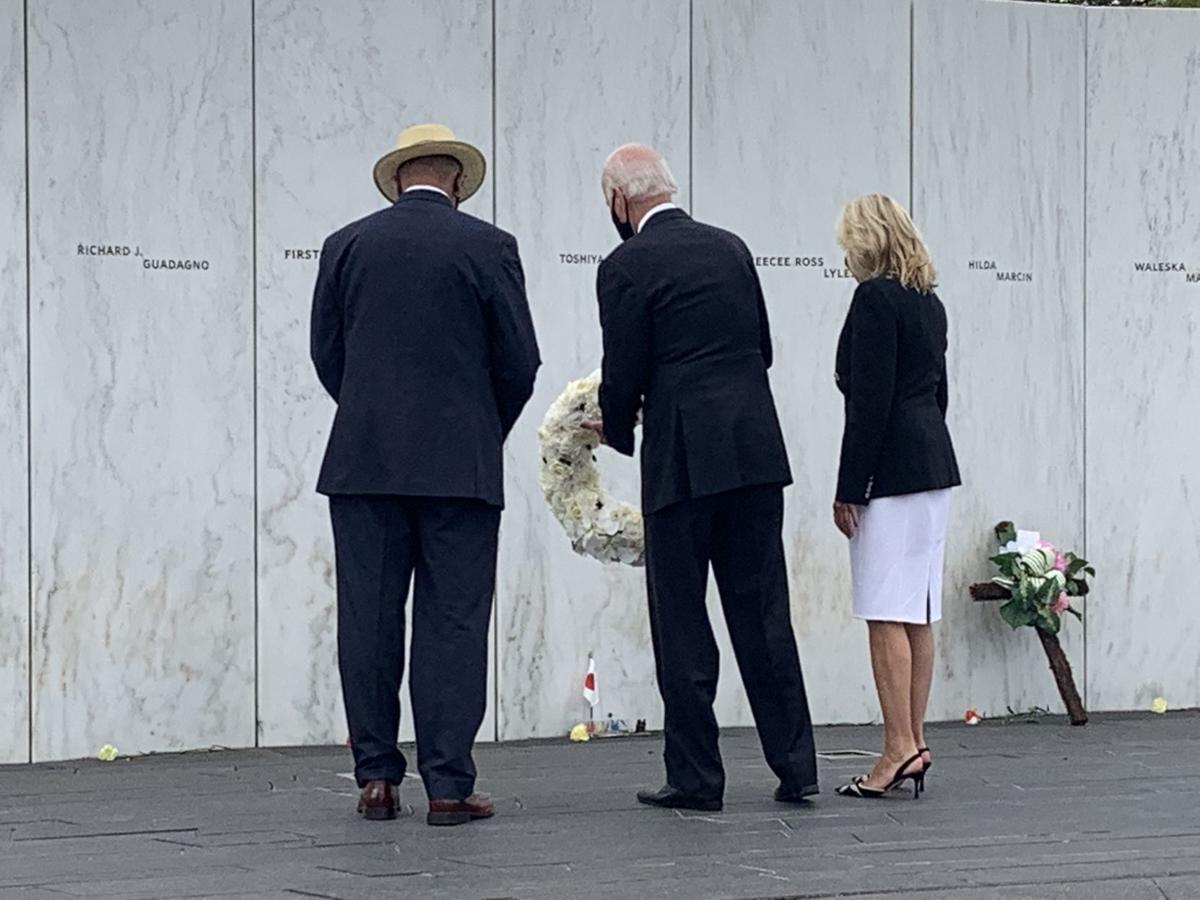 Presidential candidate Joe Biden, with his wife, Dr. Jill Biden, beside him, places a wreath Friday at the Wall of Names.

Presidential candidate Joe Biden, with his wife, Dr. Jill Biden, beside him, places a wreath Friday at the Wall of Names.

The field, now hallowed ground, is the site where 40 passengers and crew members lost their lives fighting back against terrorists who hijacked United Airlines Flight 93.

Their efforts to bring the plane down in the grassy field at 10:03 a.m. thwarted the terrorists’ plans to crash the plane into its intended target, the U.S. Capitol.

Trump appeared and spoke at an abbreviated ceremony Friday morning, while former Vice President Biden made a stop in the afternoon.

“Nineteen years ago on this day, at this very hour, on this field, 40 brave men and women triumphed over terror and gave their lives in defense of our nation,” Trump said in an approximately 15-minute speech honoring those who lost their lives. “Today we pay tribute to their sacrifice, and we mourn deeply for the nearly 3,000 precious and beautiful souls who were taken from us on Sept. 11, 2001. The heroes of Flight 93 are an everlasting reminder that no matter the danger, no matter the threat, no matter the odds, America will always rise up, stand tall and fight back.”

Trump said “the 40 intrepid souls of Flight 93 died as heroes.”

He also thanked first responders who raced to the aid of victims at Ground Zero, including the more than 400 firefighters, police officers and port authority workers who lost their lives.

“Today, we honor their extraordinary sacrifice,” Trump said, asking people to never forget their bravery and calling for unity.

The COVID-19 pandemic has altered many American rituals, and the Flight 93 commemoration is among them – the ceremony, usually 90 minutes long, was shortened to less than an hour.

The anniversary ceremony began with a prayer and moment of silence led by the Rev. Steven McKeown, chaplain to the FBI in Pittsburgh.

In years past, family members read aloud the names of those killed, but on Friday, one person, retired Flight 93 park ranger Mary Jane Hartman, was tasked with reading the list. The “Bells of Remembrance” rang between names.

The president was accompanied by First Lady Melania Trump. Among those who attended the ceremony was Secretary of the Interior David Bernhardt.

Root commented on “the collective act of courage” of the passengers and crew, who learned about the other terrorist attacks through phone calls from loved ones while they were in the air.

“They were unable to save themselves, but they knew that unless they acted, many more would die,” he said. “It is our responsibility as a nation to see that these actions are remembered.”

Flight 93 was en route from Newark, N.J., to San Francisco on the morning of Sept. 11, 2001, when four hijackers seized control of the aircraft and redirected the plane toward Washington, D.C.

In all, nearly 3,000 people were killed on 9/11 in attacks on the World Trade Center in New York City and the Pentagon.

Following the traditional wreath laying ceremony, family members of those who lost their lives aboard Flight 93 walked through the Wall of Names – some left flowers, rosaries, notes, and other personal items below the names etched into the wall – to the ground where the plane crashed.

The ceremony was closed to the public, but the 2,200-acre park reopened after it concluded, and dozens of visitors walked the grounds.

Biden and his wife, Jill Biden, also laid a wreath at the Wall of Names and then met with some of the family members, including Albert Youngblood, whose sister, Wanda Anita Green, was a flight attendant.

In informal comments, Biden remarked on the passengers’ courage, noting, “These are people who literally laid down their lives.”

“When you consciously know that what you’re about to do is likely to cost you your life, that is an incredible thing,” he said.

Youngblood, from New Jersey, attends the ceremony every year, but it was the first remembrance for his wife, Janet English, who met Youngblood after his sister died.

Biden recalled that his mother told him growing up that bravery resides in every heart, and she asked him, if tested, “how will you respond?”

“These people responded. Never underestimate the willingness of innocent people to save the lives of others,” Biden said.

Anne Small and her husband, Robert, made a 3 1/2-hour drive from Philadelphia to visit the site for the first time. Anne broke down in tears while walking near the wall and recalling where she was when she heard the news about the 9/11 attacks.

“Their sacrifice, it brings tears to my eyes just thinking about what they did,” she said. “I am amazed that the plane landed here in the middle of nowhere, when it could have destroyed houses or crashed in a populated area. It is amazing.”

Also this year, the Towers of Light tribute – double beams of light that evoke the twin towers and climb 20,000 feet into the sky – debuted. The lights, visible from as far away as 50 miles, will be displayed through Saturday.

Nothing about Bush ignoring warnings, another Republican disaster.

You should be ashamed of yourself for politicizing the commemoration of a national disaster that took 3000 American lives. Can't you give it up for long enough to show some respect for the dead?