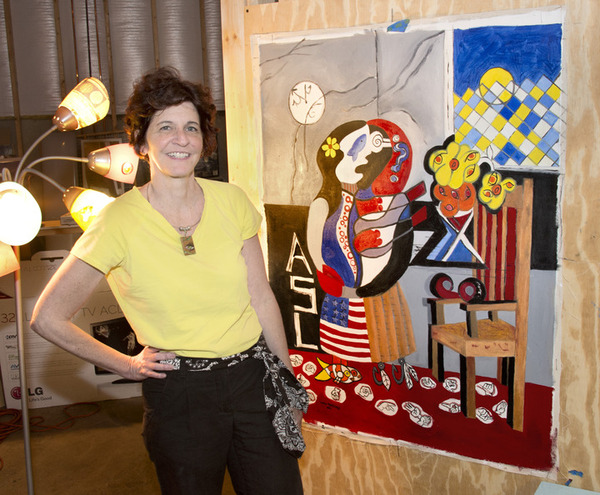 Ellen Mansfield, a deaf artist, is shown with an oil on canvas painting she is working on in her basement studio of her home near Walkersville titled "I Will Never Forget". Mansfield is one of five U.S. artists invited to participate in "The World is Heard by the Soul" exhibit in St. Petersburg, Russia. Staff photo by Sam Yu 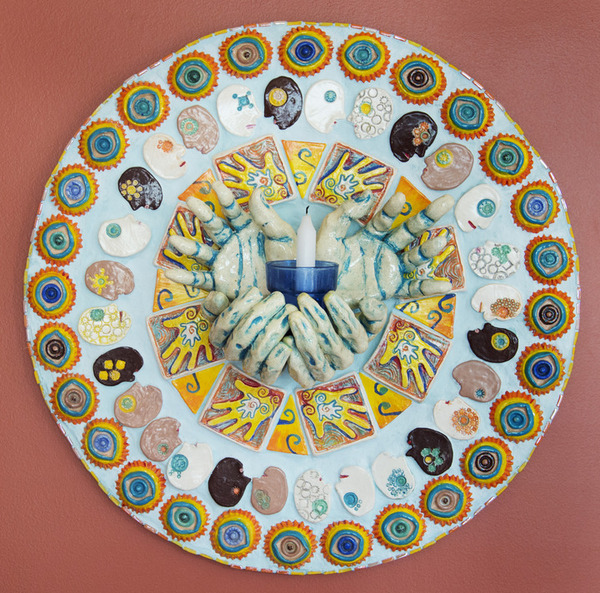 This piece of ceramic artwork was created by deaf artist Ellen Mansfield in her home studio near Walkersville. Staff photo by Sam Yu 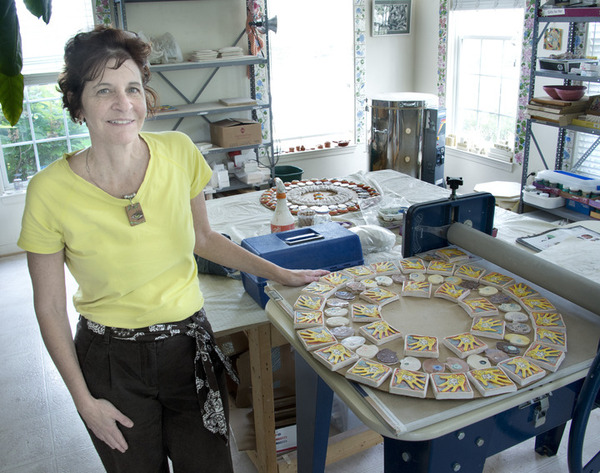 Deaf artist Ellen Mansfield is shown in her ceramic studio in her home near Walkersville recently. Staff photo by Sam Yu

Ellen Mansfield, a deaf artist, is shown with an oil on canvas painting she is working on in her basement studio of her home near Walkersville titled "I Will Never Forget". Mansfield is one of five U.S. artists invited to participate in "The World is Heard by the Soul" exhibit in St. Petersburg, Russia. Staff photo by Sam Yu

This piece of ceramic artwork was created by deaf artist Ellen Mansfield in her home studio near Walkersville. Staff photo by Sam Yu

Deaf artist Ellen Mansfield is shown in her ceramic studio in her home near Walkersville recently. Staff photo by Sam Yu

WALKERSVILLE — Ellen Mansfield is an artist who sees the world through the sound of silence.

Deaf since birth, Mansfield’s art reflects her life experiences — from being disciplined in school for using sign language to her passion for Deaf art.

The Frederick artist is one of five U.S. Deaf artists selected to participate in the Saint Petersburg International Art Exhibition “The World is Heard by the Soul,” in Russia at the Smolny Institute and Lenin Museum. The exhibit will feature the work of Deaf artists from the U.S., Russia, Italy, South Korea, Germany, Belarus, Spain, Iran, Croatia, India, Poland, France and Kazakhstan.

Mansfield leaves Wednesday and will spend four days there surrounding the exhibit opening, which continues through September.

A manifesto of Deaf art was created in 1989 at Gallaudet University during the Deaf Way festival that featured performances of poetry and plays, along with Deaf artists, including a group from Russia. Mansfield was there and witnessed the signing of the Deaf View/Image Art (known as De’VIA) manifesto.

De’VIA is created when the Deaf artist expresses their deaf experience through visual art.

Mansfield’s oil painting “I Will Not Forget” was selected for the exhibit in Russia. The painting measures 40 by 30 inches. The image depicts a deaf student and a teacher, and is about being the victim of audism, defined as the notion that one is superior based on the ability to hear or behaves in the manner of one who hears.

“When I was growing up, the school would not let me use sign language. It was banned. I show the truth in my artwork about that resistance,” said Mansfield, who was born in Manhattan and grew up in New Jersey. She went to public school where learning for her was difficult without sign language and interpreters.

In “I Will Not Forget,” those experiences are reflected in two people. The person on the left is a deaf child in America. Her U.S. flag skirt has black stars representing the bribery for rewards “when a deaf child has not used our natural language all day,” Mansfield wrote in an artist’s statement. The student’s fish-shaped eye is Russia’s symbol for deaf people.

The person on the right is a hearing teacher, wearing a skirt of rulers. “In the past, teachers used them for spanking on deaf children’s hands if they used (American Sign Language),” she wrote. The teacher has a black “oppression arm” with a claw-shaped hand to represent audism.

The painting was inspired by Mansfield’s memory of the “Monday chair” in the classroom. A deaf child would sit on the chair, with hands under their thighs, facing their deaf classmates, to explain their weekend using oralism.

A ray of hope in the painting is seen in sunny yellow flowers in a vase. Each flower is implanted with bright eye shapes, symbolizing “hope for everyone to stand up strong and keep ASL alive,” she wrote.

Through her art, Mansfield seeks to create an understanding that hearing and deaf people are the same.

“We don’t look at deafness as a disability because we are people like everyone else,” Mansfield said. “The only difference is we use sign language.”

Mansfield is a graduate of the School of Visual Arts in New York City, where she earned a BFA in illustration. Her husband and their two daughters moved to Frederick in 1998 so the girls could attend Maryland School for the Deaf, where sign language is used to teach and many of the teachers and administration are deaf, too, she said.

Her in-home studio is called TileStroke Studio, where she makes hand-carved art tiles. She works in a variety of aesthetic and technical styles, including sculpted relief, carved plaster blocks, tile presses and mosaic tiles.

She submitted four pieces to be considered for the exhibit, including ceramic tiles, paintings and a ceramic mandala. The Sanskrit word mandala means circle and represents wholeness. Her mandalas include Deaf symbols, such as the eye, which represents how Deaf people see the world, and a celestial circle, representing the sun and energy.

“Sign language gives us energy to feel alive, to communicate,” Mansfield signed to an interpreter during an interview.

While in Russia, Mansfield will participate in round-table meetings with other Deaf artists and attend the exhibit opening. He hopes to present a workshop with other artists about De’VIA.

Airfare and visa costs for the trip are about $1,400 per person and Mansfield and the other U.S. artists have established a fund to help raise funds to cover the costs. To contribute, visit www.gofundme.com/USADeafArtists.

Congratulation Ellen. You made it !

Indeed, Deaf art is ART. It is a GREAT GREAT headline!!

no art is deaf art. All art speaks. Stupid headline.