Skip to main content
You are the owner of this article.
Edit Article Add New Article
You have permission to edit this article.
Edit
Home
News
Opinion
Sports
Topics
Calendar
Classifieds
Special features
2022 Voters Guide
1 of 2 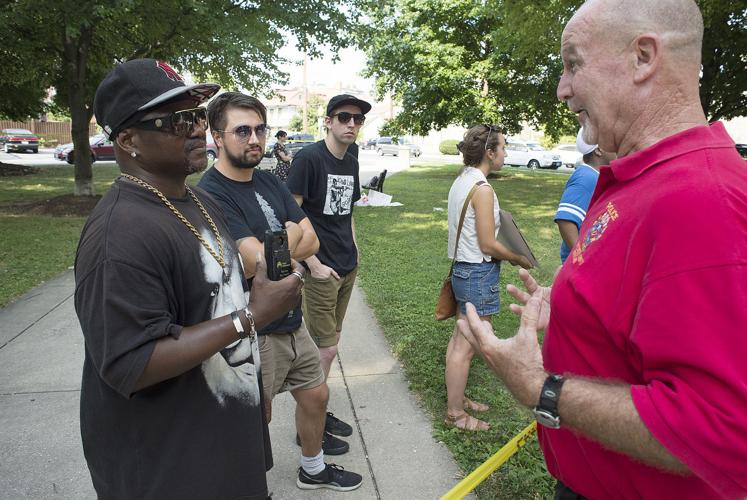 From left, counter protesters Keith Hillard, Dylan Petrohilos and a man who declined to give his name talk with Ron Sterling, a former Montgomery County police officer, after the Blue Lives Matter rally on Sunday near Memorial Park. 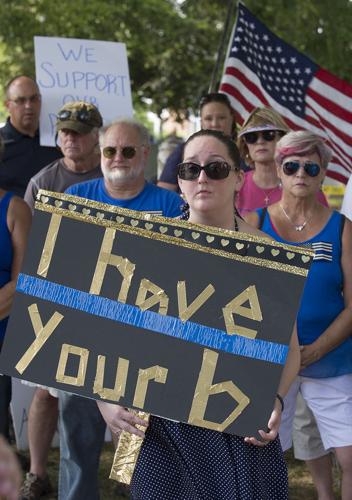 Emily Conrad, front, a 911 dispatcher with the Frederick County Sheriff’s Office, listens to speakers at the Blue Lives Matter rally held Sunday in Memorial Park at the corner of North Bentz and West Second streets in Frederick.

From left, counter protesters Keith Hillard, Dylan Petrohilos and a man who declined to give his name talk with Ron Sterling, a former Montgomery County police officer, after the Blue Lives Matter rally on Sunday near Memorial Park.

Emily Conrad, front, a 911 dispatcher with the Frederick County Sheriff’s Office, listens to speakers at the Blue Lives Matter rally held Sunday in Memorial Park at the corner of North Bentz and West Second streets in Frederick.

For Daniel Sullivan, an officer in the Frederick Police Department, one purpose of a Sunday rally he organized was to help with a healing process.

Spurred by the recent shootings of police officers in Baton Rouge, Louisiana, Sullivan said he wanted to bring together law enforcement personnel and “pro-law enforcement” community members through the Blue Lives Matter rally.

“We identify ourselves as police officers, and when another police officer somewhere else dies, that hurts us,” said Sullivan, firearms coordinator for the department.

Another key purpose of the rally, he said, was to “reach out to the other side of the community.”

Dozens of people gathered at the rally held in a park at the intersection of North Bentz and West Second streets in downtown Frederick. Some attendees held signs with messages such as “forever backing the blue” and “my hero wears a badge.”

Sullivan and other speakers addressed the crowd, some sharing their experiences and thoughts as current or former law enforcement officers or family members of officers. The attendees participated in a moment of silence after the names of 11 officers recently killed were read aloud, including several from Dallas and Baton Rouge. Sullivan requested donations for the Dallas Fallen Officer Foundation.

Emily Conrad spoke to the rally attendees about her experience as a 911 dispatcher with the county sheriff’s office. At a younger age, she said in an interview, she didn’t care about police or viewed them negatively.

After more than four years with the sheriff’s office, however, Conrad said her perspective has dramatically changed. Now she’s worrying about officers when they don’t answer multiple “welfare checks,” though they nearly always have turned out to be all right.

“I have mini-strokes while I’m sitting there,” she said. “My life years have been lessened because they don’t answer their [welfare checks].”

Conrad said she has friends who don’t consider her “a good friend” anymore because she supports Blue Lives Matter. She added she also supports Black Lives Matter, specifically the families, friends and communities who are grieving after losing someone.

Sullivan said that he reached out to individuals actively involved in recent rallies in the city associated with the Black Lives Matter movement, but they did not want to participate in the rally. He said Frederick city doesn’t have the major problems other cities in the country are facing, but he still sees some people in the community feeling ostracized and angry both in general and specifically at police.

For the most part, he said, the relationship between the community and police is strong. While he said he thinks some people don’t understand how police think, Sullivan said officers act based on the law.

Sullivan said to the crowd that there are “unjustified shootings out there” but noted that the majority of police shootings are legitimate and fall under police officers’ duties.

While the rally attendees gathered in one area of the park marked off by yellow police tape, another group of about a dozen who associated with Black Lives Matter stood in a separate area, also designated by tape. Lt. Dennis Dudley said the groups were placed in the two areas to protect them and allow each to exercise its right to free speech.

At one point, some individuals from the Blue Lives Matter rally walked over to the other area to talk. Kavonte Duckett said he and others from the smaller group had hoped to join the rally as a group but were told they could only go over one by one.

Shatlock said that was the decision of city police in charge of security at the event to avoid potential conflict. He said rally members had invited the whole group to join them.

Duckett – who said he talked to someone from the rally about the hiring process and psychological evaluations for police – said the talks that happened between members of the two groups are important.

Duckett said there is tension between the police and community members in the county. He said he would like to see more minorities serving as officers and officers more involved and “hitting the streets” in the community.

Stephen Beck, who attended the rally, said he knows a few police officers personally and sees that their jobs are difficult and misunderstood by some.

People should follow police direction and not challenge or attack officers, Beck said. A similar point was made by Frederick County Sheriff Chuck Jenkins when he spoke to the crowd. If people follow the orders of a police officer, Jenkins said, a situation in which the officer uses force can be avoided.

Jenkins said the county is a great place for a law enforcement career, pointing to appreciation shown to his officers. Attacks on law enforcement are unspeakable and unacceptable, he said. Police officers’ jobs include keeping the peace, solving problems and protecting people – they’re not trying to be heroes or take a life, he said.

While Jenkins was speaking, chants of “black lives matter” could be heard across the park from the other group.

“And if we could get to that point of understanding that everyone is important and everyone’s life has a purpose, I think there would be a better outcome in the end,” she later said in an interview.

She said her reaction to the rally and other rallies around the country is a question.

“It’s one thing to rally together, but then what’s your next step?”

A city of Frederick police officer has sued the department, saying that his supervisors retaliated against him for holding a “Blue Lives Matte…

Sounds and looks like they were having a peaceful and informative discussion. Hi-5's to both groups.

I was there taking photos. The BLMs were mainly bunch of immature, white hipster brats.

Did you bother to flip through the pictures? But also, were you even there?

Look through the photos. So quick to judge.

Correction I have your 6 lol that's what I get for commenting as soon as I wake up!

It's a term meaning "I have your back"

It means, " I am watching your back".

Why would you say it looks stupid?