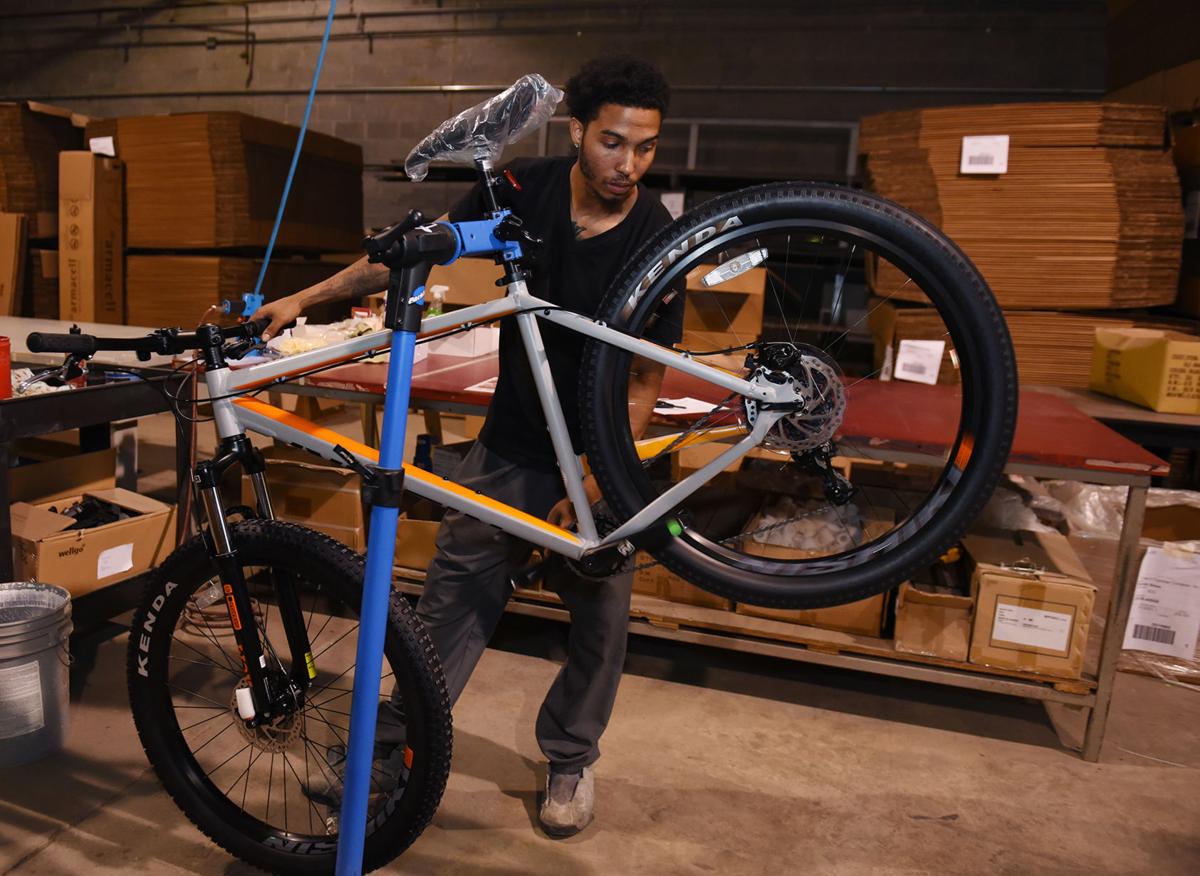 Brian Hardman, 30, does a final inspection on a bike as Detroit Bikes is partnering with Schwinn to build 500 models of their 1965 Collegiate bike, on June 25, 2020, in Detroit. (Clarence Tabb, Jr./The Detroit News/TNS) 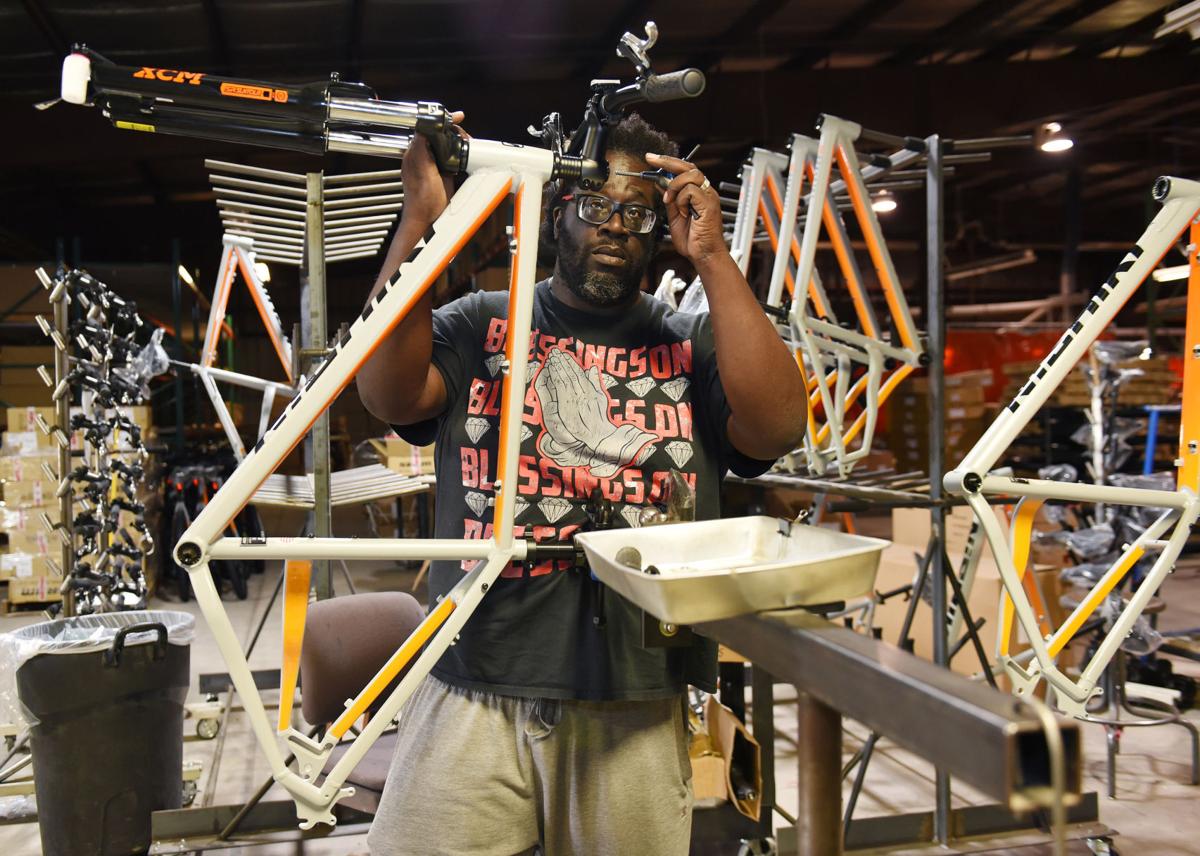 Kenny Benefield, 40, assembler, builds a bike as Detroit Bikes is partnering with Schwinn. 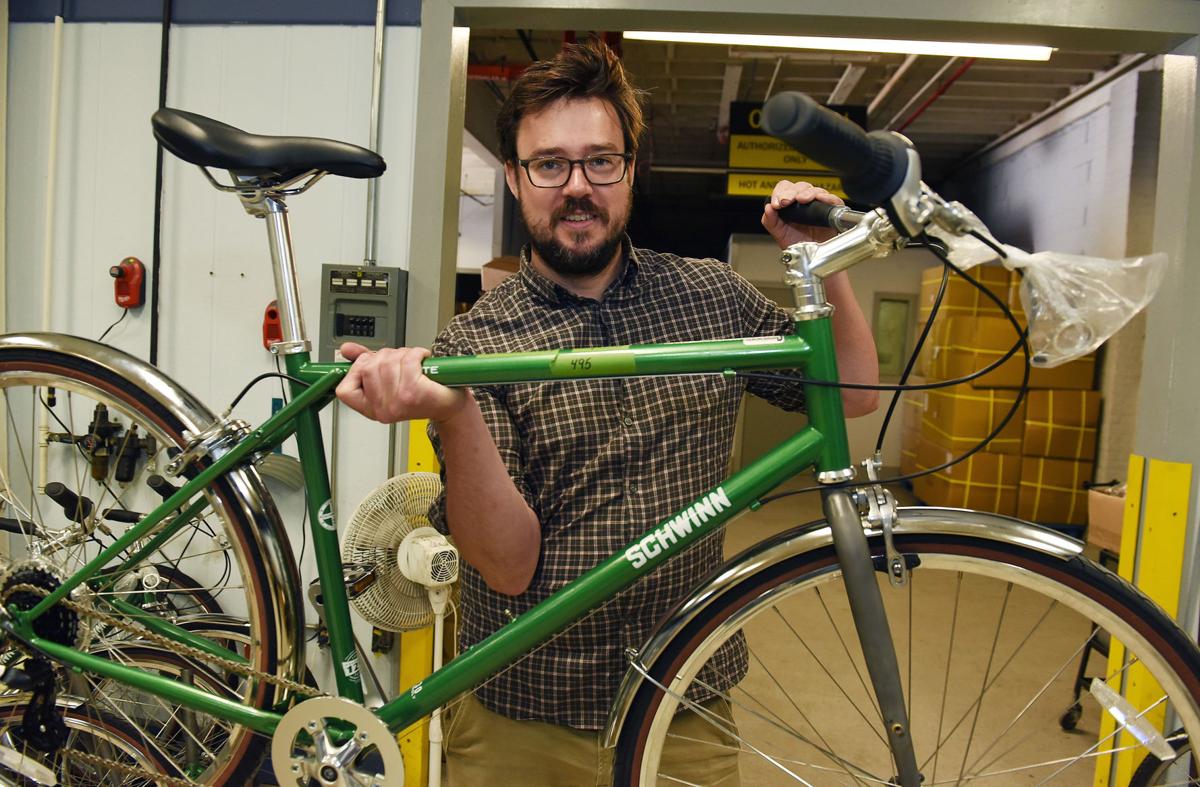 Brian Hardman, 30, does a final inspection on a bike as Detroit Bikes is partnering with Schwinn to build 500 models of their 1965 Collegiate bike, on June 25, 2020, in Detroit. (Clarence Tabb, Jr./The Detroit News/TNS)

Kenny Benefield, 40, assembler, builds a bike as Detroit Bikes is partnering with Schwinn.

DETROIT — A Detroit bike manufacturer is expected to bring Schwinn production back to the U.S. later this month as workers begin assembling limited copies of the brand’s classic 1965 Collegiate bike.

In a partnership with Schwinn, an American brand that traces its lineage to 1895 in Chicago, Detroit Bikes LLC is building 500 bikes of the revived Schwinn model that debuted in 1965, according to The Detroit News.

“This is the first time Schwinns have been manufactured in the U.S. in a long time,” said Zak Pashak, owner and founder of Detroit Bikes. “Manufacturing has been decreasing in the U.S., and this is a big step to change that. We’re going to need to step up our game for this one. But we’re ready to take on the challenge.”

The Schwinn Collegiate to be produced in Detroit is intended to reflect “the leisurely aesthetic evoked by the 1965 version”, according to Ryan Birkicht, senior communications manager at Schwinn Bikes. The bikes will be painted in classic Campus Green.

The price will be higher than other Schwinn models, expected at $998 each. They will be available to purchase as early as August on Walmart’s website, Birkicht said.

As demand for all bikes and other outdoor equipment is booming amid pandemic restrictions, Detroit Bikes is eager to bring at least a part of the bicycle manufacturing industry back to domestic soil.

For copyright information, check with the distributor of this item, The Detroit News.

I hope Schwinn has upped their game. Their bikes used to be heavy as a tank.

Just as long as Doctor Fed Up GregF doesn't try to call me a racist again for not wanting a bicycle made in China. Remember that? I do.

Yeah, I do remember that bosco. And I say let him buy all the ones he wants from them, too. That'll prove that at least he's not a racist, huh? [lol]

Yes, I remember bosco. I don't know what kind of riding you want to do, or at what level, but there is still a bunch of bicycle manufacturers in the US. Here's a link to them. See you on the road!

Thanks for the link, gabriel. I have an old Schwinn LeTour that I bought in the late 1970s when they were still made in the USA. I rode it all over California and even did some century and half-centuries on it. It's still in great shape and has been upgraded with new equipment over the years so that it's mostly the frame that's still original. It's a bit heavy by today's standards.

Great. A bicycle made in America. I'll be checking these out.