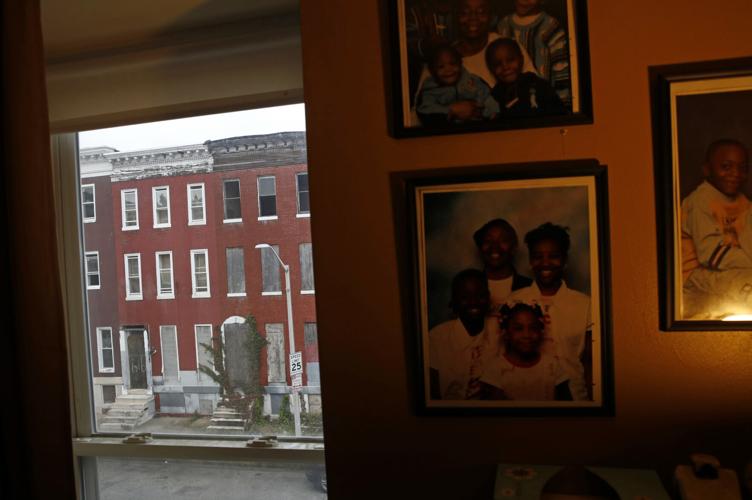 In this Oct. 26, 2020 photo, vacant rowhomes are visible from resident Nayeka Scott’s living room in the Harlem Park neighborhood of Baltimore. A sea of roughly 16,000 uninhabitable row homes with weeds growing out of boarded-up windows are symbols of this city’s enduring social divide. Housing researchers say some 20,000 other city properties are unoccupied and pose a latent risk of becoming crumbling shells in the future. 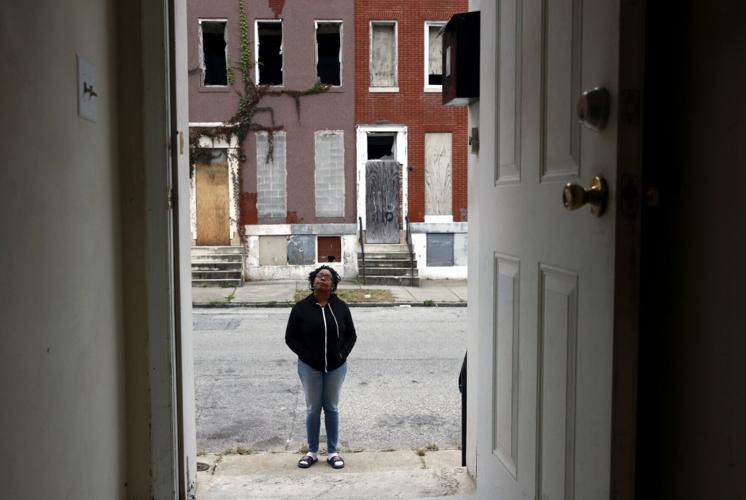 Nayeka Scott stands outside her front door, across the street from vacant row homes in the Harlem Park neighborhood of Baltimore. In 1950, Baltimore was America’s sixth most populous city. It’s since dropped to the country’s 30th largest. And there’s no end in sight to the population drain.

In this Oct. 26, 2020 photo, vacant rowhomes are visible from resident Nayeka Scott’s living room in the Harlem Park neighborhood of Baltimore. A sea of roughly 16,000 uninhabitable row homes with weeds growing out of boarded-up windows are symbols of this city’s enduring social divide. Housing researchers say some 20,000 other city properties are unoccupied and pose a latent risk of becoming crumbling shells in the future.

Stepping over needles on the sidewalk, Alexander Cruz walked up to the crumbling front stoop of a West Baltimore home. He craned his neck and looked through an open third-story window to see whether the roof had caved in yet.

Cruz’s company had a deal to buy this vacant rowhouse, one of at least 15,000 in Baltimore. He wanted to renovate it, rent it to a family and remove the eyesore from a block on West Pratt Street that otherwise appeared to be occupied.

Then Cruz learned the property owner owed more than $100,000 in property taxes and water bills that had gone unpaid for years, snowballing debt until it became overwhelming. Homes saddled with such debt are called “ghost homes” because their debts are so large that no one will buy the homes, condemning them to a sort of housing purgatory. The vacant homes then become crime magnets and fire hazards.

Baltimore City is rolling out an ambitious plan to take over vast numbers of ghost homes, clear the debts and sell them to qualified developers, but city attorneys and staff have their work cut out for them. Two researchers estimated the number could easily be 5,000 vacant homes with outstanding debts — if not much higher.

“Anybody that is buying homes in Baltimore — from an investor standpoint — to fix up, they definitely encounter this situation,” Cruz said.

Cruz is a partner at CR of Maryland, a Baltimore County firm that has bought hundreds of homes in the city in recent years, primarily targeting vacants, renovating them and selling them as turnkey rentals to investors. The home on West Pratt appeared to be a perfect target for a renovation.

It was only when CR of Maryland had a contract to buy the home that Cruz said he learned the owner owed more than $100,000 in property taxes and water bills. If Cruz wanted to buy this house, his company would have to take on all that debt.

Cruz said he runs into this problem twice a month in Baltimore.

“We need to come up with some kind of creative solution that allows people to buy these properties and fix them up,” he said.

A typical foreclosure means a lawsuit against a person who has fallen behind on mortgage payments or other debts, though that person can give up the property to satisfy the debt. “In rem” is a Latin phrase meaning “against a thing.” In rem foreclosure allows the city to essentially sue a property. It’s a simpler process with less paperwork.

It currently takes years for the city to take ownership of a property that has delinquent tax and water bills. The house typically must cycle through Baltimore’s tax sale process. In rem foreclosure could put a home in the city’s hands in as little as four months, according to a lawyer for the city’s housing commission.

Odette Ramos advocated for a 2019 state law that allowed in rem foreclosure when she was the executive director of the Community Development Network of Maryland. Recently, she’s helped nudge the idea into a reality as a Baltimore City Council member, calling it a game-changer for the city.

“We should’ve been doing this a long time ago. But the moment is now,” Ramos said. “People shouldn’t have to live next to vacant properties anymore.”

Two researchers at the Johns Hopkins University, Mary Miller and Mac McComas, recently published a paper on the cost of vacant homes to the city. Baltimore has tagged about 15,000 homes as vacant and unsafe for habitation. Miller and McComas found that the city spends at least $100 million annually on vacant homes for 911 calls, outreach to squatters, cleaning and boarding up properties, mowing, rat control and much more. They estimated that if those homes were inhabited, they would add $110 million annually to city coffers from property taxes, income taxes and bills for water and sewer service.

That means if Baltimore could solve its vacant housing crisis, it would add roughly $210 million to the city’s coffers every year.

As part of their research, Miller and McComas tried to determine how many owners of vacant homes were paying their property tax bills.

“The numbers are really confounding and they’re hard to get,” Miller said. “We tried to get an actual number from the city and could not.”

Instead, they relied on information from a 2016 study and were able to estimate that roughly 65% of vacant homes were current on their property taxes, which surprised Miller.

“I went into this thinking, ‘Well, why would anyone be paying property taxes on vacant housing?’” she said. “But actually, a lot of houses have taxes being paid.”

That leaves about a third of Baltimore’s vacant homes racking up unpaid property taxes, meaning at least about 5,000 or so properties would qualify as ghost homes.

Seema Iyer, the former director of the Baltimore Neighborhood Indicators Alliance, has been studying the city’s communities and its vacancy problem for years.

In a relatively strong neighborhood where a house becomes vacant, in rem foreclosure probably won’t be that useful because the homes are probably worth more than whatever debts have accumulated, Iyer said. But there are a handful of Baltimore neighborhoods where a fifth or more of homes are vacant and property values are low, Iyer said. It doesn’t make financial sense for a developer to buy one of those homes if it has tens of thousands of dollars in debt attached to the title.

“That’s exactly where in rem [foreclosure] is going to help because there’s no market there,” Iyer said.

In rem foreclosure alone won’t transform a neighborhood, Iyer said, but she described it as another tool in the city’s toolbox.

Joe Kirchner, an attorney at the Department of Housing and Community Development, is figuring out how best to wield that tool.

“This opens up the whole universe of properties where the liens exceed the value in a particular target area,” Kirchner said. “Once the city holds title, we can sell it to developers or assemble a park or things like that.”

The city owns less than a tenth of homes identified as vacant and abandoned, but Kirchner said that share is about to go up.

Kirchner told The Baltimore Sun in October that there were four attorneys filing foreclosure cases for the city, with another attorney scheduled to start at the end of October. There are plans to add four more foreclosure attorneys and two attorneys who specialize in property titles, plus paralegals and a new case management system.

The housing commission filed its first eight cases in late summer, Kirchner said, and attorneys are in the process of filing dozens more. They’re currently looking at vacant homes in what the city has designated “ Impact Investment Areas,” areas that mostly include neighborhoods east and west of downtown as well as Park Heights in Northwest Baltimore. These are low-income areas that the city believes are primed for transformation.

Kirchner said the housing commission already has identified more than 500 homes for in rem foreclosure in those areas and expects to have a list of 1,000 addresses by the end of the year.

“Once we have all the attorneys on board, and once we have this system up and running, I think we’ll be ready to charge ahead in 2023,” Kirchner said.

*Subscriptions renew automatically every 30 days for $19.99. Call 240-215-8600 to cancel auto-renewal. Most subscribers are served by News-Post carriers; households in some outlying areas receive same-day delivery through the US Postal Service. If your household falls in a postal delivery area, you will be notified by our customer service team.

*Subscriptions renew automatically every 30 days at $14.99. Call 240-215-8600 to cancel auto-renewal. Most subscribers are served by News-Post carriers; households in some outlying areas receive same-day delivery through the US Postal Service. If your household falls in a postal delivery area, you will be notified by our customer service team.