You have permission to edit this article.
Edit
Home
News
Opinion
Sports
Topics
Calendar & events
Classifieds & local
Features
Best of the Best
1 of 4 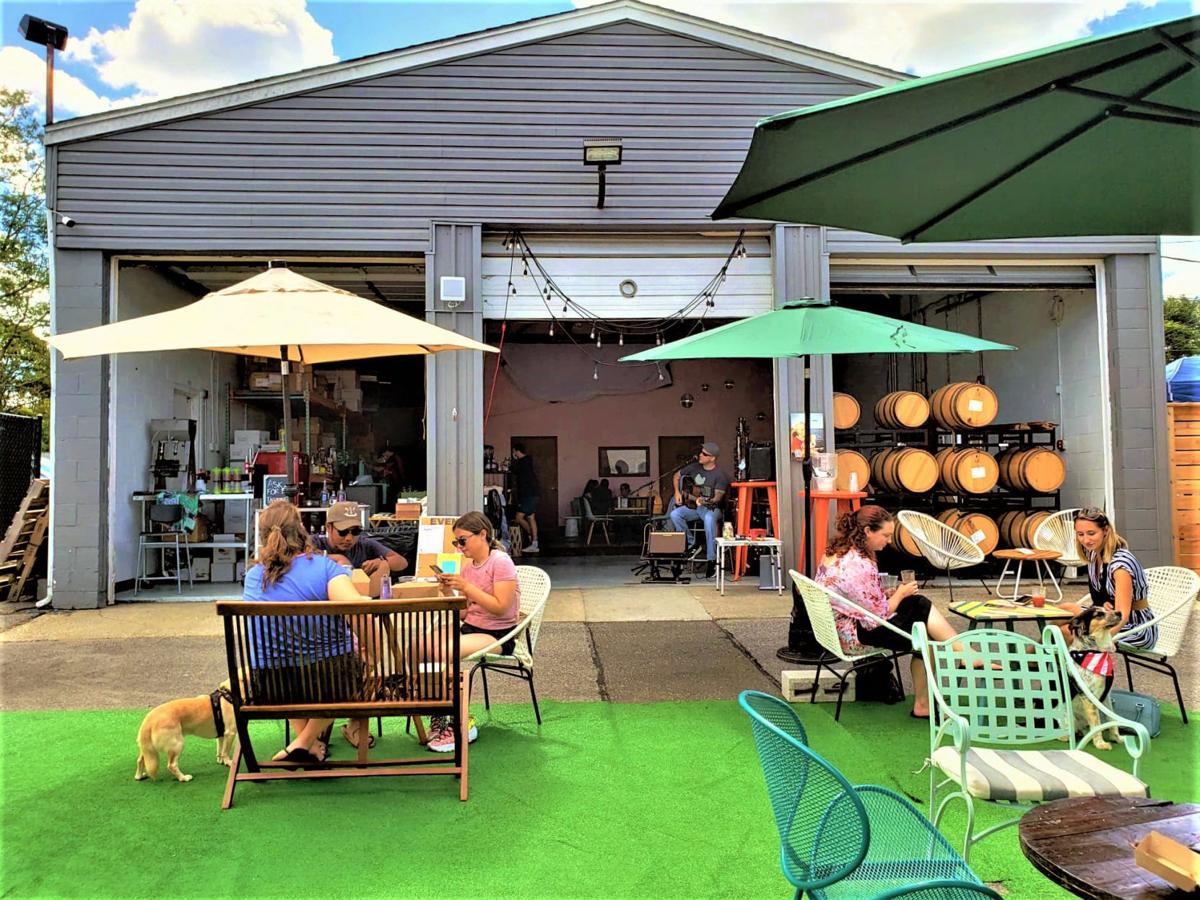 At the Better Man Distilling Company in Long Island, guests gather for Sunday brunch with live music on the vast patio. 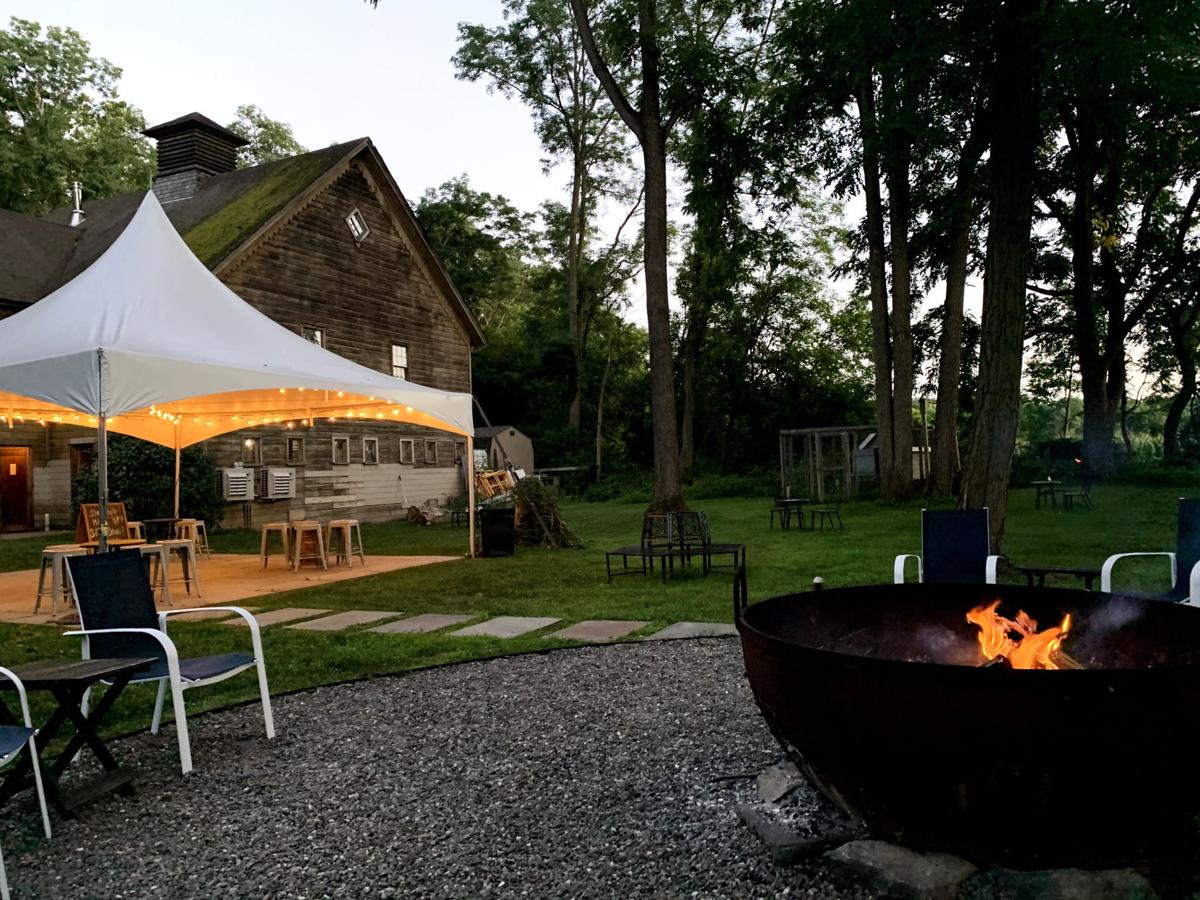 At Cooper’s Daughter Spirits, located on a Hudson Valley farm, visitors can enjoy drinks made with the distillery’s farm-to-glass spirits and food from local food trucks. 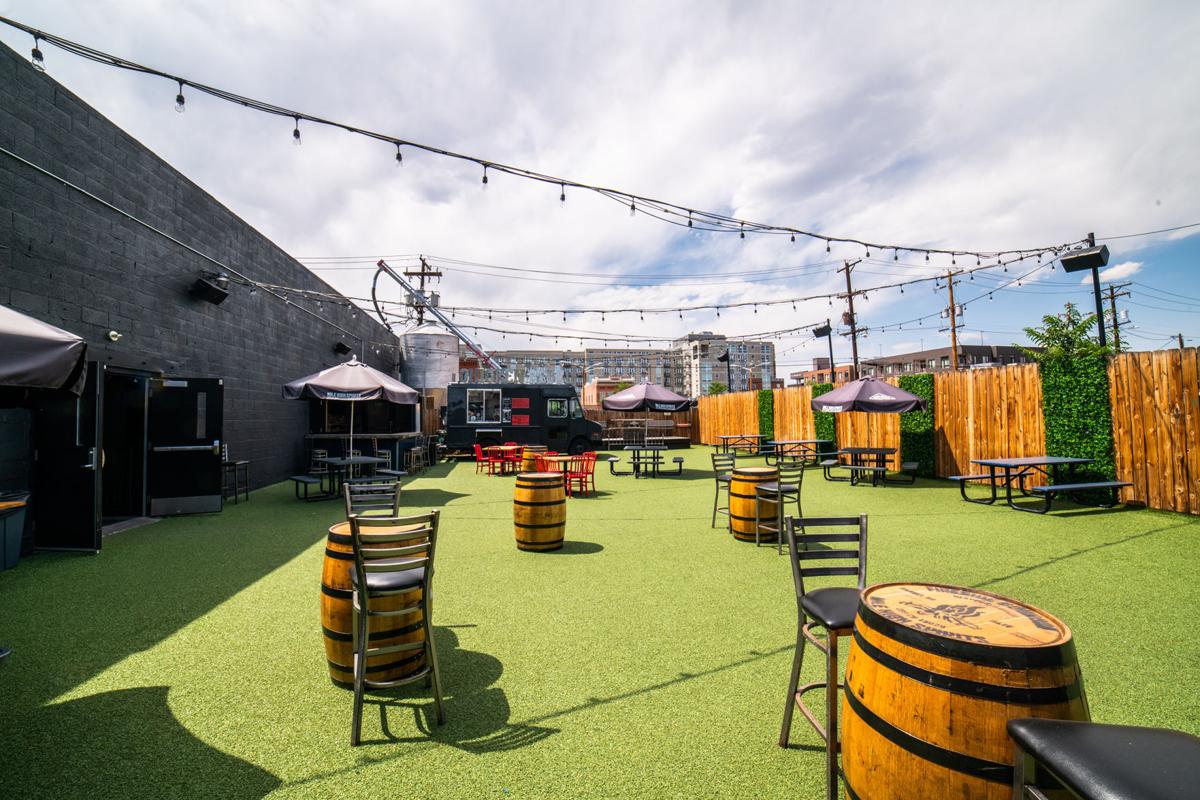 On the patio at Mile High Spirits in Denver, guests can sip the house whiskey or a bloody mary and listen to live bluegrass on Saturdays while abiding by social distancing regulations. 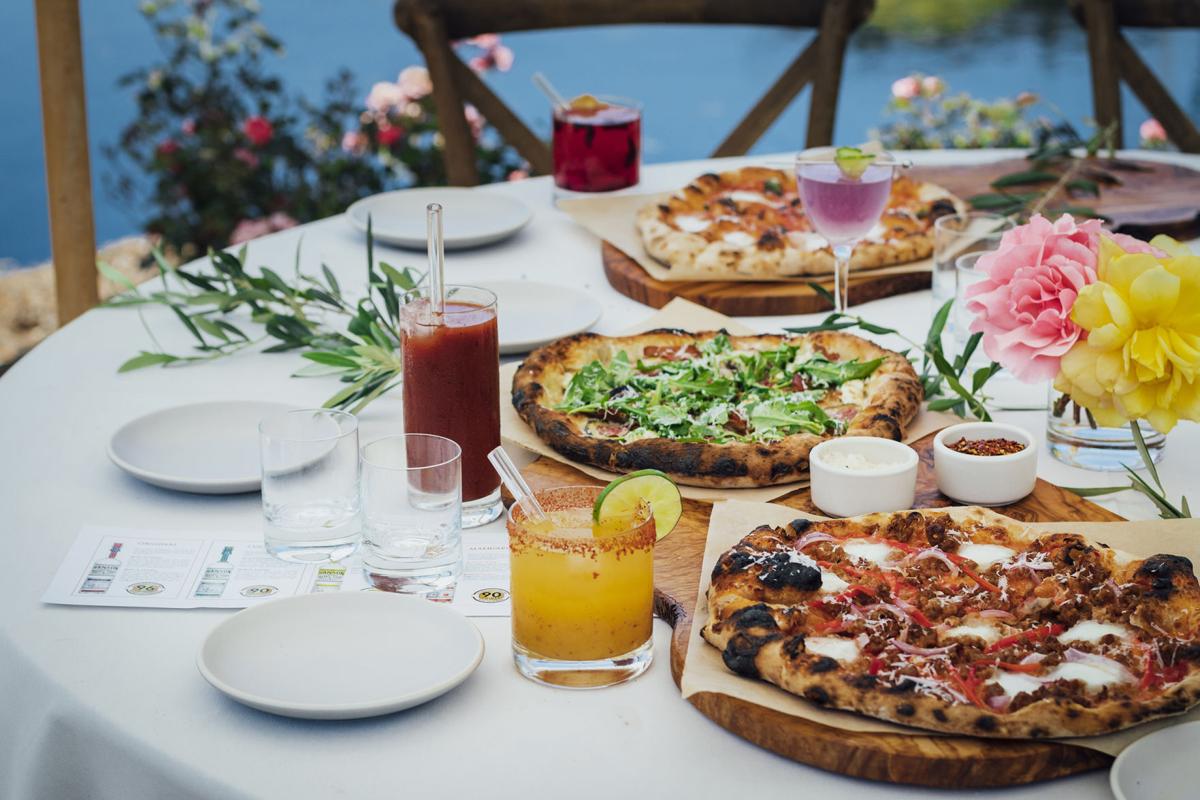 When the pandemic set in, the vineyard-set Hanson of Sonoma Distillery installed a custom wood-fired pizza oven outside.

At the Better Man Distilling Company in Long Island, guests gather for Sunday brunch with live music on the vast patio.

At Cooper’s Daughter Spirits, located on a Hudson Valley farm, visitors can enjoy drinks made with the distillery’s farm-to-glass spirits and food from local food trucks.

On the patio at Mile High Spirits in Denver, guests can sip the house whiskey or a bloody mary and listen to live bluegrass on Saturdays while abiding by social distancing regulations.

When the pandemic set in, the vineyard-set Hanson of Sonoma Distillery installed a custom wood-fired pizza oven outside.

Division Street is a nondescript stretch in Patchogue, a village on the south shore of Long Island. A five-minute walk from the Long Island Railroad station, it’s dotted with houses, the intermittent deli and a custom apparel shop.

So on a recent Sunday, it was hard to miss the Better Man Distilling Company’s parking lot, where people were lined up at food tents. The smell of vegetables sizzling on a grill and grains cooking floated far down the block.

Each food option was more tempting than the last: live-shucked bivalves by Tallmuthashucka (“They’re four hours old,” owner and oyster farmer and eponym Keenan Boyle told me); vegan eats from Peach & Pine Cafe, whose plans to open a storefront nearby were waylaid by the pandemic; and fresh sorbet and vegan ice cream from Fete Desserts. I took a plate of local oysters to the back patio, where people — and a few dogs — sat around liberally spread-out tables.

A guitarist singing mellow covers of classic rock songs was perched beside neatly stacked barrels of whiskey. Abby Gruppuso, head of operations at her family’s new distillery, brought over a flight of Better Man’s four spirits and explained each one, including a dry gin and Elysian Fields, a captivating lavender gin. She guided me to the vast entrance of a warehouse-esque building behind me and showed me the still it was all made on.

There are more than 2,000 craft distilleries in the United States. Many switched to hand sanitizer production at the onset of the pandemic, effectively putting liquor production on hold. Then as shutdowns halted tasting room sales and wholesale orders from restaurants and bars plummeted, revenue streams dried up. In most states, distillery tasting rooms are subject to the same reopening legislation as bars and restaurants, which means that even as they open, indoor visitors are largely prohibited. According to the Distilled Spirits Council of the United States, a trade organization, craft distillers are projected to lose $700 million in annualized sales, a loss of 41 percent of total business. But entrepreneurship runs deep in the distilling industry, and quite a few owners are finding creative ways to stay in the game while keeping safety top of mind.

Like Better Man, many distilleries around the country have taken social distancing and capacity restrictions and turned them into an opportunity to team up with local producers and make their site into a community gathering place. Food trucks, bakers, provisions-makers and musicians are all invited — as long as everyone promises to keep a safe distance and sanitize.

Cooper’s Daughter Spirits is set on a Hudson Valley farm that is listed on the National Register of Historic Places. When the coronavirus shuttered New York distilleries in March, it launched a pop-up drive-through selling food and bottled cocktails. Once the distillery was allowed to welcome back guests in June, it expanded the patio to create what it calls the Cocktail Garden, a tented setting where people can sip cocktails made with their farm-to-glass spirits accompanied by local food truck fare.

“When we wrote our business plan, we intended to have a place that was collaborative — where we could host local artisans and hold small craft fairs. A lot has changed from that plan, but collaboration is the one thing we always held on to,” said Sophie Newsome, a co-owner of the family-run operation. “There’s a real sense of community here.”

Snapping into action to organize came easily to Albany Distilling Company founder John Curtin, who had hosted artist events in the past and helped establish the Capital Craft Beverage Trail, which encompasses 53 producers — eight of which are distilleries — across eight upstate counties. Making use of his expansive patio, he set up socially distanced seating and corralled local restaurants. Selling their food at the distillery has been a boon for eateries with limited outdoor dining capacity. In Rochester, Black Button Distilling and various food producers petitioned the city to shut down a road where they created the Railroad Street District. A street-festival vibe defines the setup, which offers food and drink. The distillery features concerts and cocktail and bourbon-blending classes.

Community is especially critical for distilleries such as Prohibition Distillery in the Catskills, a region battered by decreased tourism. According to owner Brian Facquet, food and drink operations form an interconnected network that keeps business flowing from one to the next.

“When you understand community, you understand everyone’s different capabilities. We can all push people to visit different parts of the county when they’re here,” he said. Guests get a taste of other businesses at his bar. Honey from local beekeepers, coffee from an area roaster and a heady bloody mary mix from Van Smokey, his friendly neighborhood smoke house, are featured in his drinks. They’re sold from a walk-up bar with a plexiglass front in his “Good-to-go Garage,” the name he has given to his retrofitted setup. His ample property allows for vast distances between tables, making it a popular destination on the weekends when he hosts local musicians.

A safely distanced live-music component is a priority for Wyn Ferrell, founder and owner of Mile High Spirits in downtown Denver. The sprawling space has long been a nightlife attraction, known for hosting marquee-name disc jockeys and Grammy Award-winning musicians such as Ludacris. Food was an afterthought. But in early spring, they welcomed a food truck from the cultishly popular restaurant Chicken Rebel to create outdoor hangout options. The tremendous distillery encompasses a sprawling patio, where a mellow crowd gathers on Saturdays to watch live bluegrass, and a tasting room, which has 20-foot-high ceilings. It has reopened to guests, albeit at 10 percent of its normal 500-person capacity.

“Tourism has fallen out, but we’re not going to sit around and feel sorry for ourselves.” Ferrell said. “Alcohol was made to be fun, so let’s create the most fun place we can where people can enjoy themselves.”

Now he speaks of Mile High as a sit-down restaurant, which was never the case before: “We want to come out of covid more dynamic and accessible.”

Hanson of Sonoma Distillery, set amid grape vineyards, had an eye to the future when it recently enhanced its dining offering. The massive custom wood-fired pizza oven that was installed outside is a new attraction for the culinary-focused clientele, who have long been lured with menus by Michelin-starred chefs making guest appearances and vodka pairings with area purveyors, such as a caviar company.

Of course, a chief reason for visiting distilleries is to get a glimpse of the art and science of the spirit-making process. But with the tight confines of so many distilleries, tours are a lost cause. High West Distillery has found the next best thing. The Park City, Utah, outfit, which features a destination-worthy restaurant with ample patio seating, appropriated a space for a socially distanced “sensory experience.” A tour guide takes seated guests through the whiskey-making process with the help of individual samples of raw ingredients, a contained display of fermentation, a demo on a miniature still and a tasting flight.

But perhaps the distilleries best positioned to keep visitors arriving are the ones with other safe-from-covid enticements built in. Royal Foundry Craft Spirits, a vast 15,000-square-foot distillery in Minneapolis, is known for two things: its British-inspired spirits and its Cycle Speedway course. The small, oval, traditionally English clay course accommodates up to four people riding bikes without brakes. (They’re available to rent.) Co-owner Nikki McLain said they just got a license for their own food truck, Brixton’s British Pub Grub. With a gin and tonic, fish and chips, and a view of the action from socially distanced tables on the patio, you can almost imagine yourself far, far away across the pond.