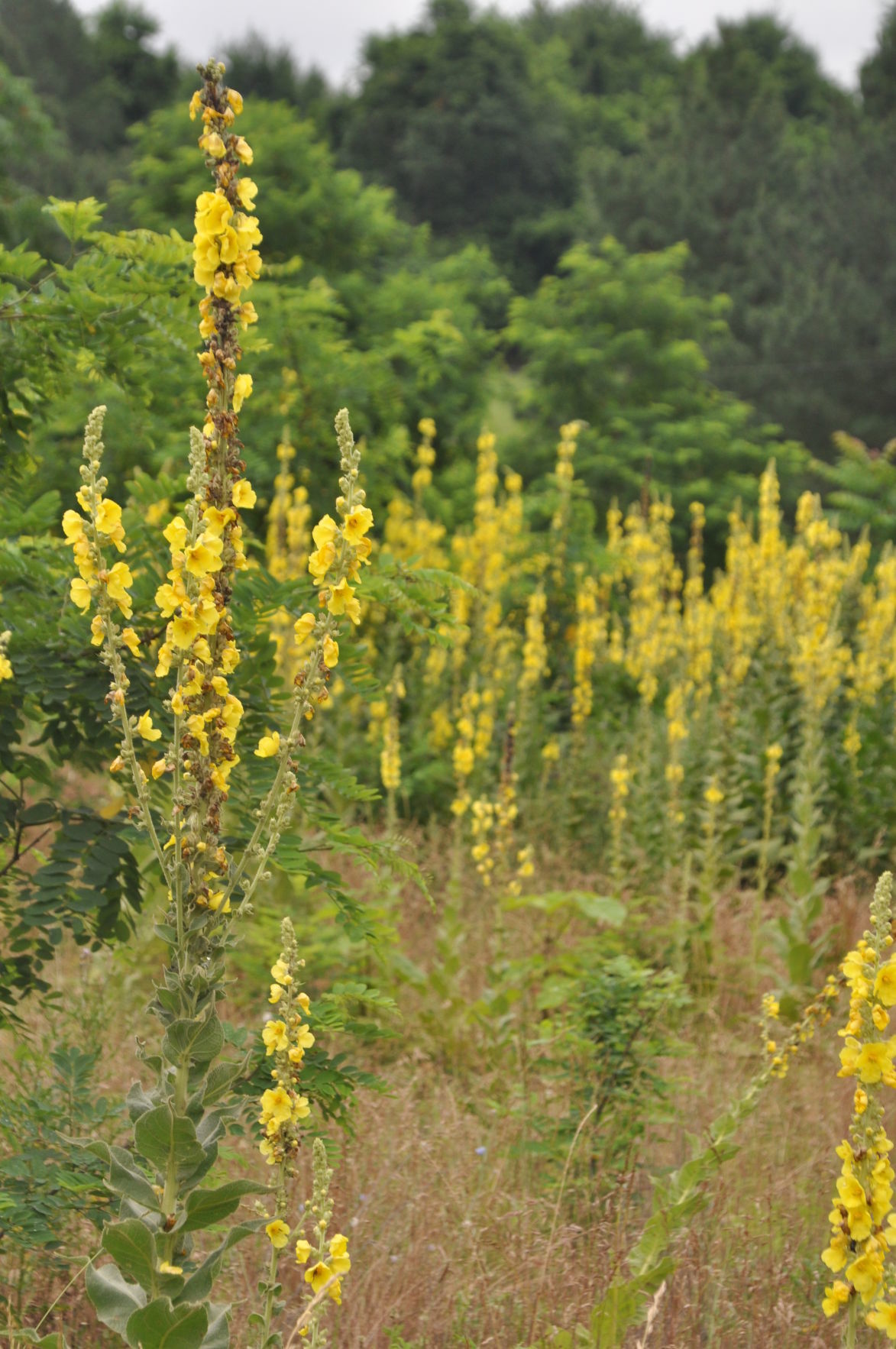 Sometimes nature can take all the work right out of your hands. These self-seeded Verbascum thapsuscreate a beautiful source of pollen and nectar for many pollinators. 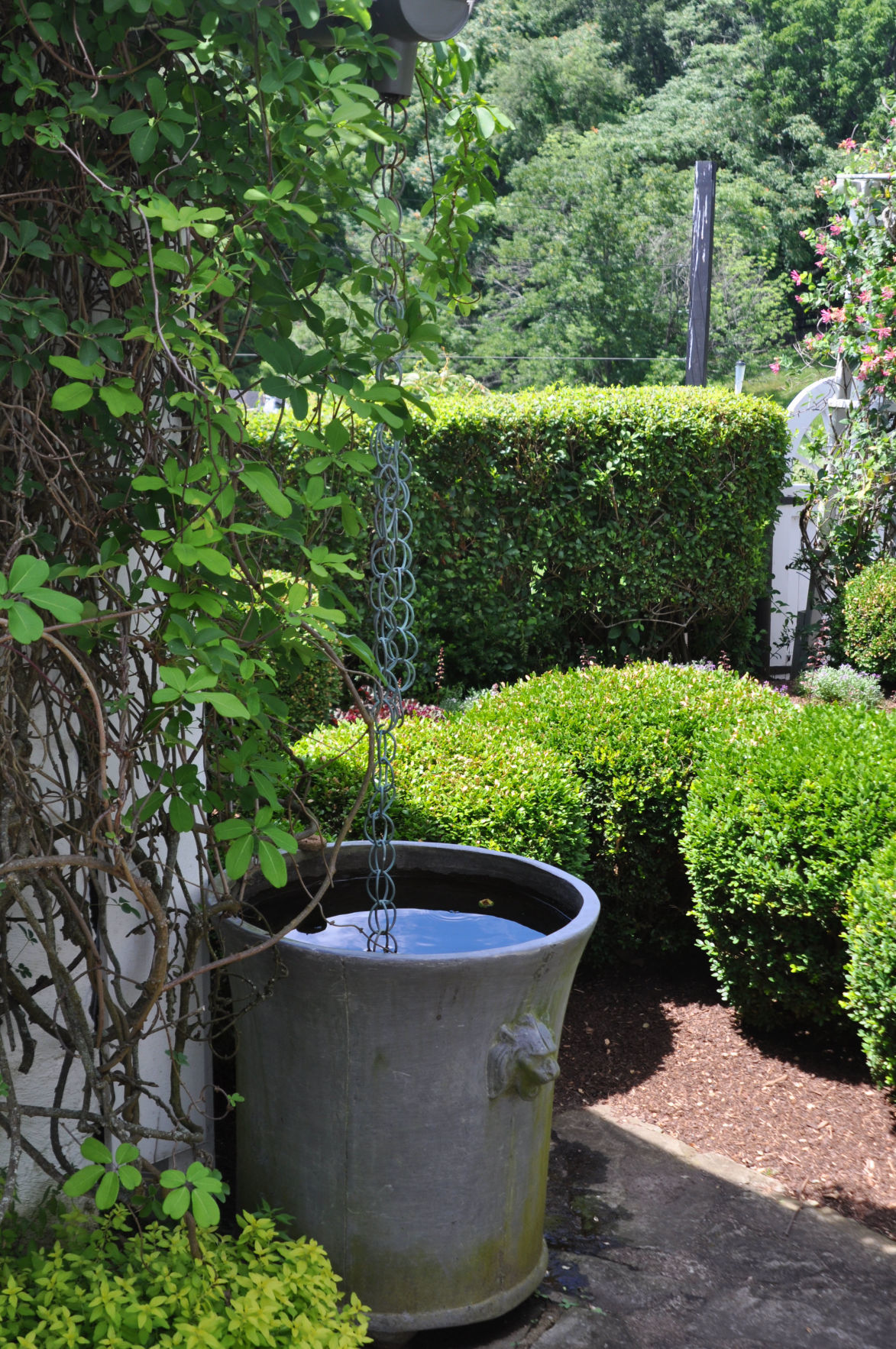 A source of water is an important feature in a pollinator friendly garden, but you must ensure that it contains a ‘landing pad’ for pollinators. They will be hard pressed to safely land here – no matter how lovely the feature. 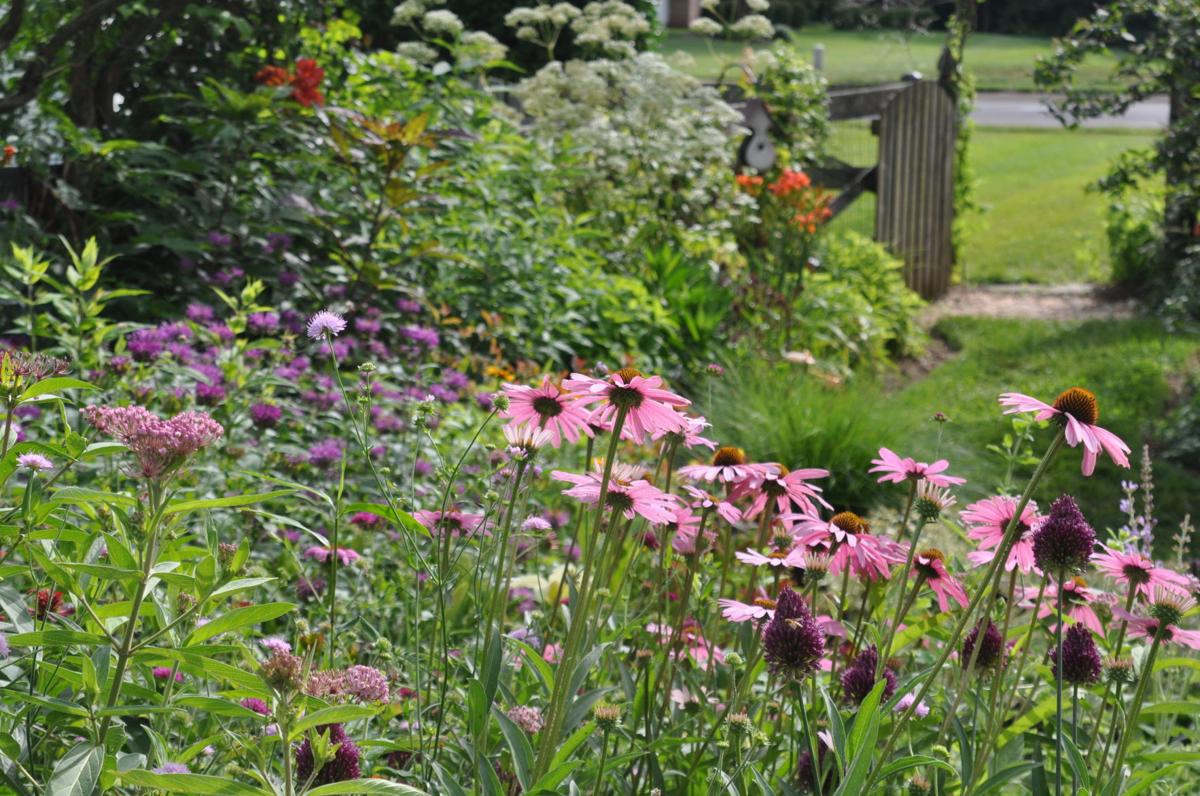 The key to a successful pollinator garden is a wide selection of different flower shapes, sizes and colors with emphasis on high nectar and pollen producing cultivars. Not necessarily the “latest” cultivars.

Sometimes nature can take all the work right out of your hands. These self-seeded Verbascum thapsuscreate a beautiful source of pollen and nectar for many pollinators.

A source of water is an important feature in a pollinator friendly garden, but you must ensure that it contains a ‘landing pad’ for pollinators. They will be hard pressed to safely land here – no matter how lovely the feature.

The key to a successful pollinator garden is a wide selection of different flower shapes, sizes and colors with emphasis on high nectar and pollen producing cultivars. Not necessarily the “latest” cultivars.

Gardeners are proud of their gardens for a host of different reasons. Some gardeners spend a great deal of time blending or contrasting color schemes. Others love creating secret rooms or impressive hardscaping. But if you’re a gardener that spends just as much time watching the creatures that pollinate your garden as planting the flowers that attract them — and you’re crazy-proud of the diversity of species flying around at any one time — you may be interested in giving that garden a bit of official recognition.

And with a new certification program coming out of our county extension offices, you can do just that.

If you just read the words “certification program,” instinctively substituted “complicated” and began to rustle the newspaper in preparation for a page turn, I can assure you, there is no math involved. Frederick County Master Gardeners have made the process pain-free and pleasurable. If you’re already enjoying a garden filled with pollinators, you’re probably one short step away from a colorful, official sign telling your neighbors why you plant the way you do.

And some of us have neighbors that would really like to know.

The Pollinator Friendly Garden Certification was created by the Frederick County Master Gardener Pollinator Committee in response to growing awareness of the importance of pollinators to our landscapes. It does not replace the statewide Bay-Wise certification, but enhances it, guiding gardeners towards specific lists of flowering plants and pollinator supporting practices.

Official certifications such as this one or Bay-Wise are not meant to single out gardens and their attendant gardeners for greatness, but to share the news with others and encourage them to think about the many ways that our gardens can bring nature in and support the life-cycles of many of our invertebrate guests.

In my last garden, I applied for and received the Maryland statewide Bay-Wise Certification, which seeks to acknowledge gardens that strive for a smart balance between a beautiful landscape and beautiful waterways. A small blue sign was posted just outside my garden gate and it looked much more official than the garden it honored, but that nonetheless alerted people to the many ways they, too, could make some small changes in order to make bigger changes to the watershed.

At the time, I found it interesting that many of the practices that I employed in my constant bid to save our family money were some of the same ones that ticked the boxes on the Bay-Wise yardstick: using rain barrels, less synthetic pesticide and herbicide use, composting, watering less and at the right time of day, and many other best landscape management practices that were also best financial management practices in my little world. In the end, it was an educational process and I enjoyed talking to people about my little blue sign when they asked.

The Pollinator Friendly Garden Certification is similar, though the sign is not blue. Instead, a hummingbird, butterfly and bee hover over a monarda blossom in a colorful yet charming hand-sketch ringed with the words “Pollinator Friendly Garden.” A year decal is affixed to the sign and a QR code for more information is also provided for the more technically minded. The sign will be offered in a standard 8x10 format, and, for the extra crazy-proud amongst us, 11x15.

To apply for the certification, applicants can download a guide online at https://bit.ly/2tcqbZK. From there, they will run through a list of requirements, ticking off those practices they follow or plants they grow. Most of the guidelines are suggestions, though some (such as having at least two species of native perennial flowers blooming through early, mid and late season) are mandatory.

Non-natives are included in the lists also, though many are herbs and non-natives and are definitely given second billing in the application. This is to be expected in today’s climate (and I don’t mean weather), but I would have liked to have seen a bit more even-handedness with some of the pollen and nectar-rich non-native flowers that gardeners love to grow — such as cleome or lychnis. Though some assume the issue is settled, the jury is still very much out on the issue of whether pollinators prefer native plants to exotic ones when attributes of flower shape and pollen/nectar availability are equal.

Habitat is also considered in the application — but don’t despair if you don’t plant large stands of milkweed for monarchs. Eastern black swallowtail will happily set up camp in your culinary parsley or feathery fennel; and if you’ve gotten on board the paw-paw craze and planted a few of these wonderful native fruit trees (Asimina triloba), you’re also setting up habitat for the Eastern zebra swallowtail caterpillar.

Other requirements in the application follow many of the guidelines in the Bay-Wise yardstick — water sources such as birdbaths or ponds, shelter such as flower pots or mason bee houses, and the reduction of pesticide and herbicide use. Chances are, you’re already doing many of these things in your own garden to increase the numbers and diversity of the species that visit and to protect those species.

The final part of the application asks for three pictures of your garden, and who doesn’t want to show off the best of what they’re growing to the outside world? Most of us are Instagramming and Facebooking such shots at ever-suffering family members on a daily basis — at least the folks at the extension office actually want to see these photos.

Those pictures, a completed application and $20 are all you need to get that garden certified and there is no renewal process necessary. Though Frederick County Master Gardeners do reserve the right to inspect your property to verify the application, it is termed a “rare event.” I would assume that most people who are excited enough to apply for certification are not in the habit of making up their credentials — the point is sharing these garden practices with others in your neighborhood.

And that really is the point. Sad as it may be, sometimes our neighbors need to see an “official stamp of approval” in order to fully appreciate that which has been in front of them for months, maybe years. If you’ve been planting for pollinators and want to officially share that news with those around you, why not consider putting in an application for certification yourself? The bees aren’t going to care, but it might just get your neighbors asking questions — the right kind.