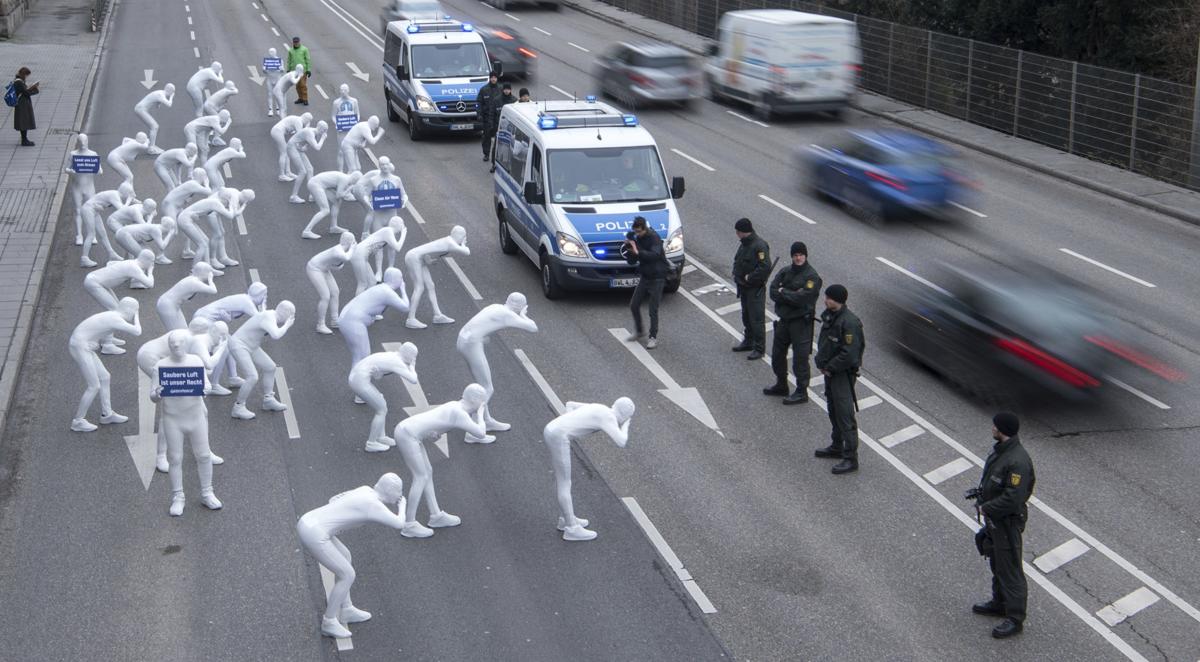 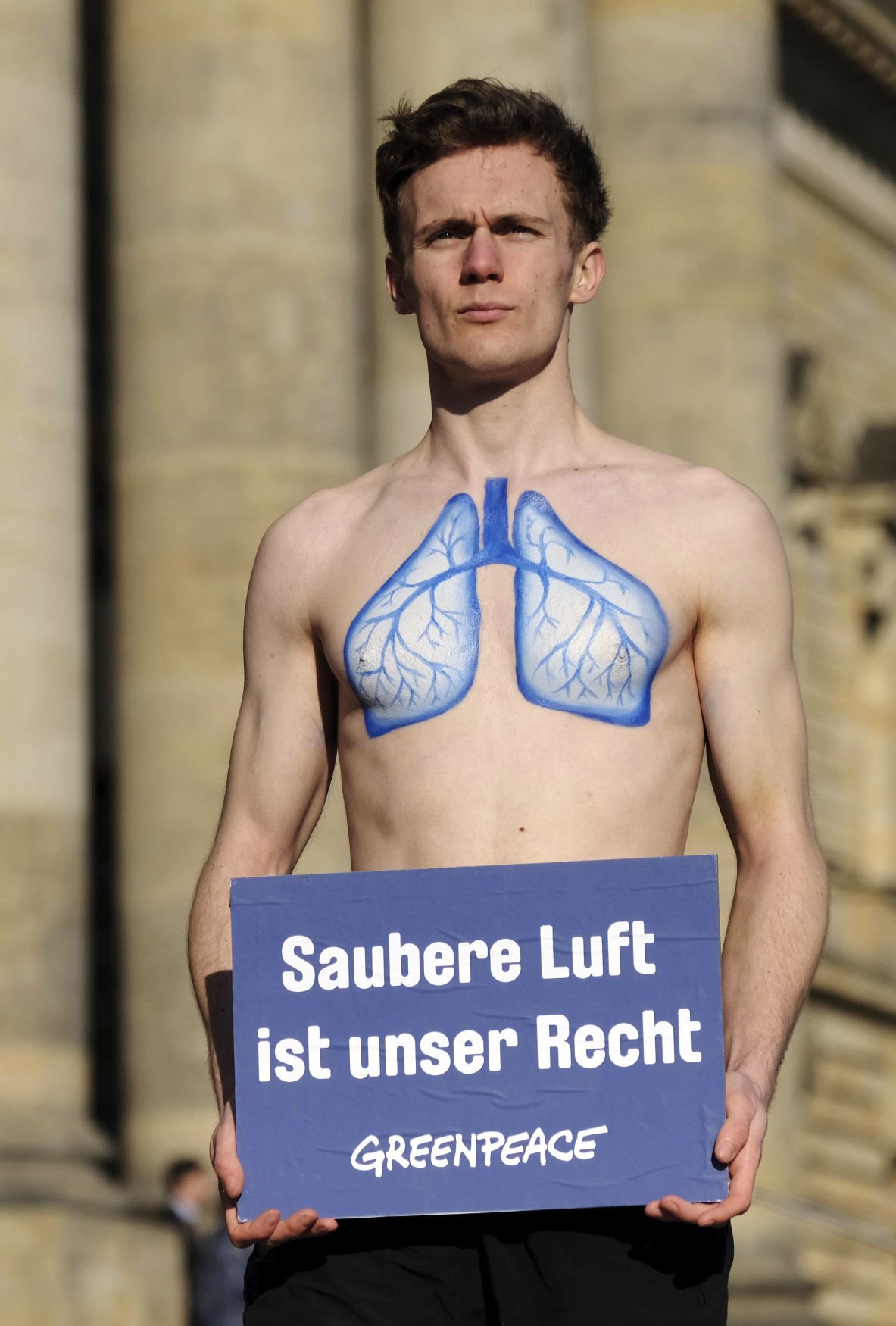 An environmental activist protests with a poster ‘Clean air is our right’ on Feb. 22 in front of the Federal Administrative Court in Leipzig, eastern Germany. 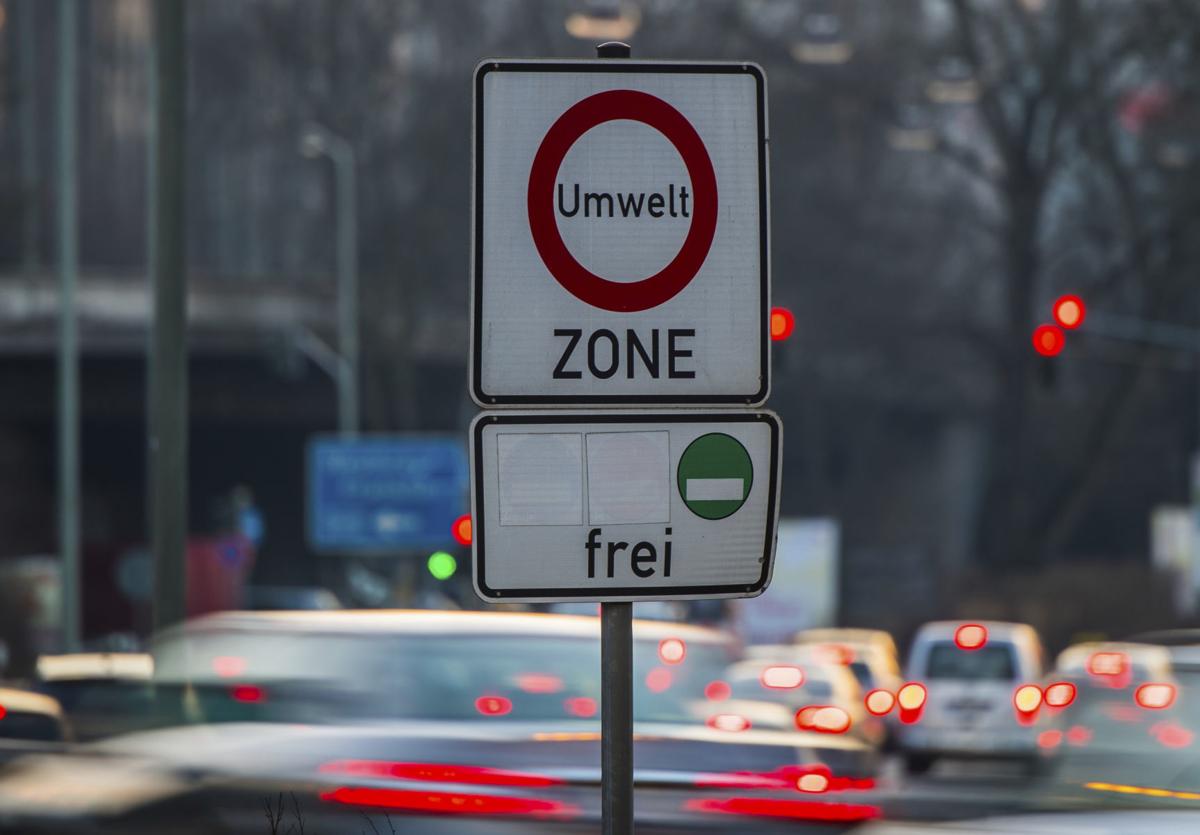 Cars pass by a sign reading 'environment zone' and allowing entrance only for cars with low emissions on Feb. 22 in Frankfurt, Germany. 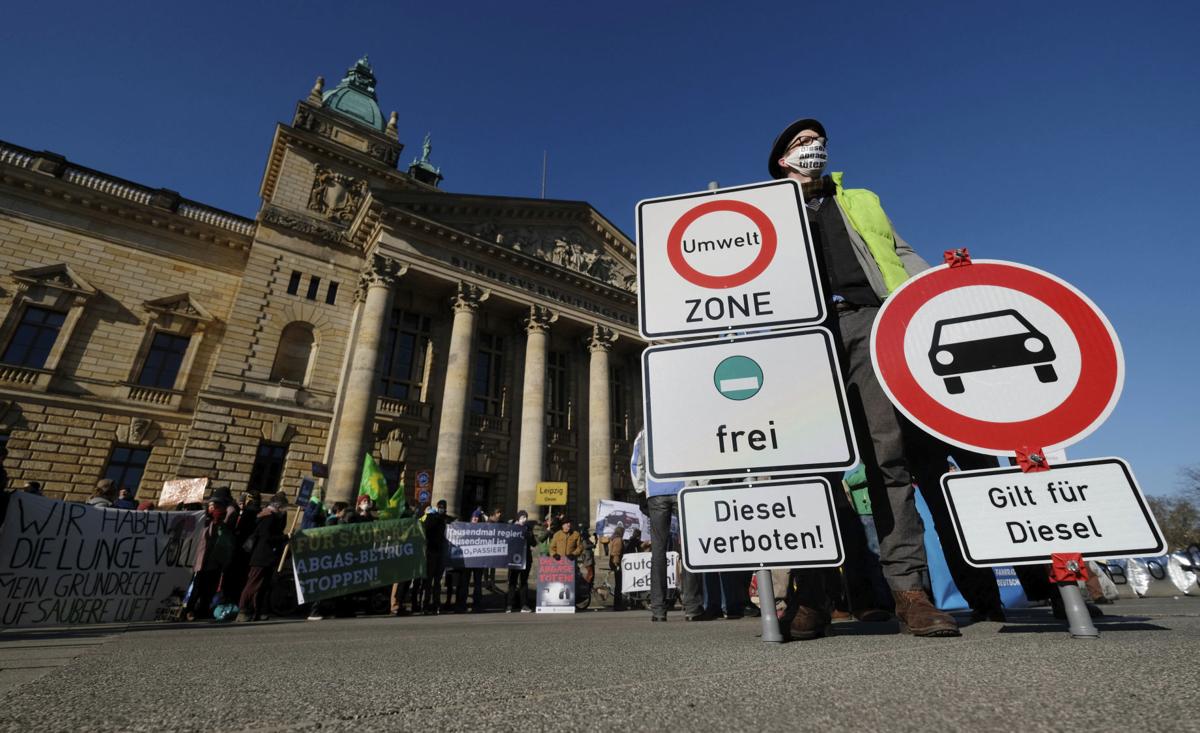 An environmental activist protests with a poster ‘Clean air is our right’ on Feb. 22 in front of the Federal Administrative Court in Leipzig, eastern Germany.

Cars pass by a sign reading 'environment zone' and allowing entrance only for cars with low emissions on Feb. 22 in Frankfurt, Germany.

HAMBURG, Germany — Streseman Street is a road like many others. It’s loud, it’s unlovely and it’s clogged with cars and trucks belching noxious fumes day and night.

But next month, the major artery in this prosperous and progressively minded port city becomes something else: a laboratory, part of a first-of-its-kind experiment in what happens when car-mad Germany bans heavily polluting diesel vehicles from its urban roadways.

For Germans, prohibiting diesel — a 19th-century fuel invented by one of their own engineers and pushed relentlessly to this day by their beloved auto industry — has the feel of a ban on beer or bratwurst.

Yet the country is torn, caught between dueling identities as both leader in going green and master manufacturer of all things that go vroom.

Hamburg’s diesel ban is limited, confined to portions of two streets with exemptions for new, cleaner models. It’s nonetheless being celebrated by environmentalists and ecologically minded politicians as a breakthrough on the path to cleaner urban air — and a rare victory over an industry that has seemed to face little sanction at home for misleading consumers worldwide about the dirtiness of its vehicles.

“Symbolically, it’s a big step,” said Manfred Braasch, local leader of Friends of the Earth Germany. “This has been a diesel nation.”

Hamburg, the country’s second largest city, is likely to be followed by other German municipalities. A top German court ruled in February that cities have the right to prohibit dirty diesel vehicles, and local authorities across the country are lining up plans to try to bring their roads into compliance with strict European Union emissions requirements before a widely expected EU lawsuit forces the matter.

The federal German government, meanwhile, has struggled to develop a comprehensive strategy. In theory, at least, officials want carmakers to clean up the heavy polluters among the nation’s 15 million diesel cars with hardware retrofits like those mandated in the United States.

“We believe in the ‘polluter pays’ principle,” said Environment Ministry spokesman Nikolai Fichtner. “Who’s responsible for the problem? The car industry. They sold cars that consumers thought would be clean. And they are clean in the laboratory. Just not on the street.”

But Angela Merkel, known internationally as “the Climate Chancellor” for her leadership in seeking to curb global greenhouse gas emissions, has equivocated on diesel.

She said last week that the auto industry must take responsibility for its mistakes, a reference to the 2015 scandal in which Volkswagen admitted to cheating on emissions tests. But she suggested it would be unfair to force carmakers — which employ 800,000 workers in Germany — to bear the burden of retrofits alone, given costs estimated in the billions of euros.

She also expressed her opposition to bans, putting Germany out of step with other European heavyweights such as Britain and France, both of which have said they will prohibit sales of new diesel and gas-powered cars by 2040 as part of a shift to hybrids and electric.

Yet, even without her blessing, Hamburg shows that German cities aren’t waiting.

The prospect of a patchwork of bans, when added to the fallout from the VW scandal, has already been devastating for the German diesel market, with sales of new vehicles dropping precipitously in recent months even as used vehicles are left to rust on dealers’ lots.

Diesel accounted for half the new cars sold in Germany as recently as 2015. But its share was down to a third by the start of this year and has fallen further since then. It’s a dramatic reversal for a fuel that had long played an outsized role on European roadways relative to its place in the United States and Asia.

Starting in the 1990s, Europe’s manufacturers pushed diesel as a cleaner alternative to gas because the fuel produces less carbon dioxide, considered the primary culprit in human-induced climate change. Governments helped prod consumers toward diesel by subsidizing the fuel.

But diesel is also a prime driver of local air pollution, and its popularity has made the air a health hazard in cities across Europe. The nitrogen dioxide and fine particles emitted by diesel — both of which are lung irritants implicated in a variety of respiratory and cardiovascular diseases — are estimated to contribute to about 400,000 premature deaths a year in the EU, including nearly 75,000 in Germany.

Air in some 70 cities and towns in Germany fails to meet the EU’s nitrogen dioxide standards. Hamburg is among them, and politicians who pushed the ban say they did so reluctantly after other efforts to reduce air pollution failed.

“I would have been glad if we hadn’t been forced to do this,” said Jens Kerstan, who leads Hamburg’s environment ministry. “But we’re taking the measures necessary to protect the health of our citizens.”

Kerstan, a member of the Green Party, said he doesn’t expect the ban to solve Hamburg’s pollution problem and would personally favor a much broader prohibition that encompasses the entire city center.

But he said he hoped the measure would have a political impact, prodding the federal government and auto industry to take notice.

The latter, he said, is “not willing to retrofit their cars, and they don’t want diesel bans. But they can’t ignore that cities are having a problem. Doing nothing is not an option.”

Critics, however, say banning diesel cars from certain roadways is worse than nothing — a counterproductive tactic that will eat up the time of police officers who have to enforce the measure while the pollution problem merely shifts to adjacent streets.

It is also, he said, “very unfair” to car owners. “If you own a diesel vehicle, you are not going to be amused by this,” he said.

Veli Fistikci is one such owner. The taxi he drives for work, a late-model Mercedes, is exempt from the ban because it’s relatively new and clean. But his personal car, an old Ford, would have been barred from sections of Streseman Street and the adjacent Max Brauer Avenue — both of which are critical for getting around Hamburg.

Rather than deal with the inconvenience, he sold the car — at a loss of 1,500 euros, or nearly $2,000. Now he has no vehicle for his family, even though he has a baby due next month.

“No one wants a diesel any more,” he said. “I’d like to buy a hybrid, but the prices are so high.”

In the long term, Germany will have to move away from both diesel and gas-powered vehicles, said Volker Matthias, a researcher at the Helmholtz Center for Materials and Coastal Research. “We have to make much more progress in shifting traffic to electric cars, electric buses and bikes,” he said.

Bans such as Hamburg’s, he said, won’t make much difference overall. “To solve the problem you need to reduce emissions, not move emissions to different places,” he said.

But to people such as Stefan Recknagel, the ban matters. A resident of the Streseman Street neighborhood for the past 25 years, he said he has a persistent cough that he attributes to the traffic roaring past his front door.

“In the summer you really notice it. You can smell it,” said Recknagel, a 47-year-old storage-facility worker. “At least they’re trying something.”

The Post’s Luisa Beck contributed to this report.