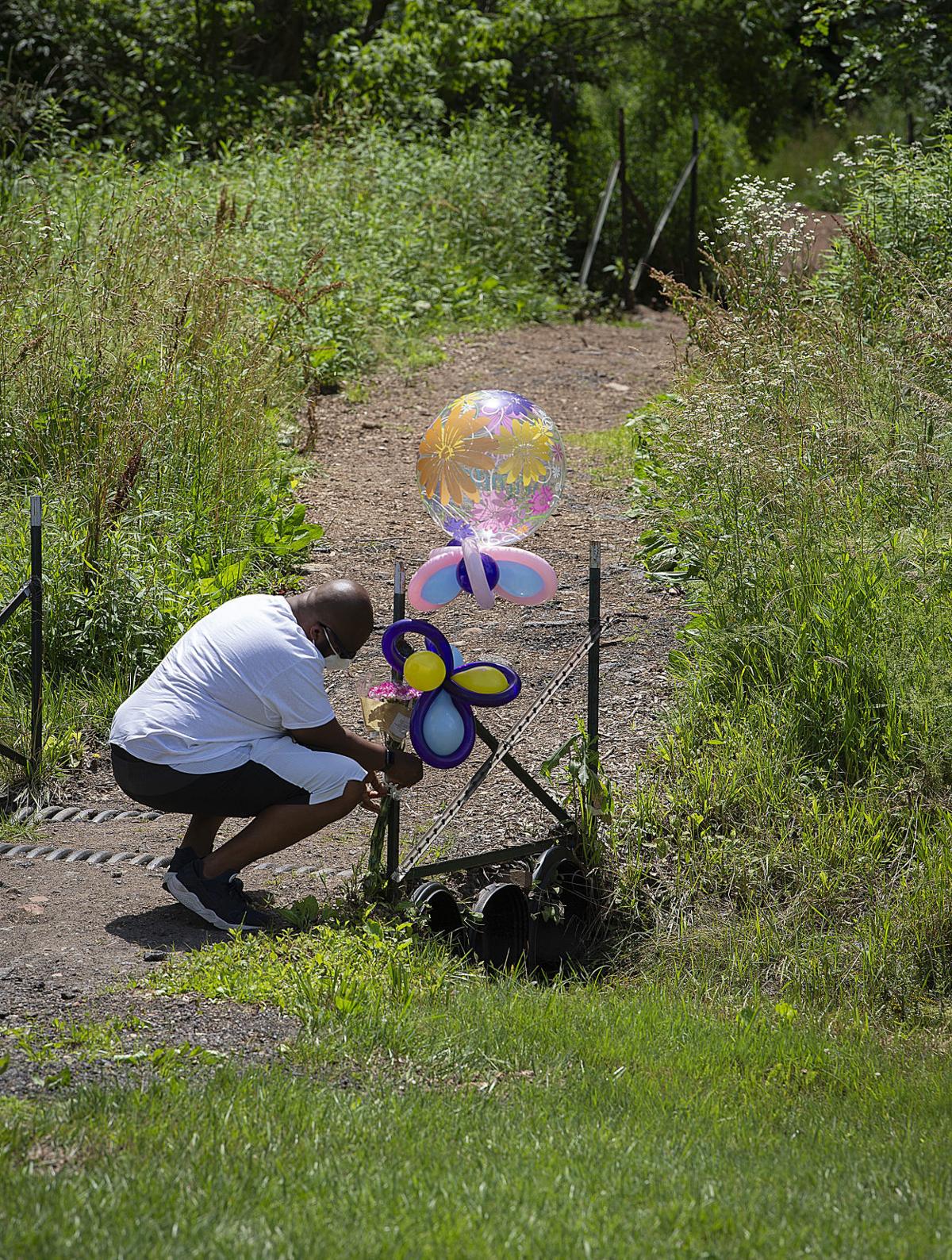 A nearby neighbor in the Farmbrook area places colorful balloons at the entrance to the path off Briargrove Court where the body of a 17-year-old girl was found Saturday afternoon. 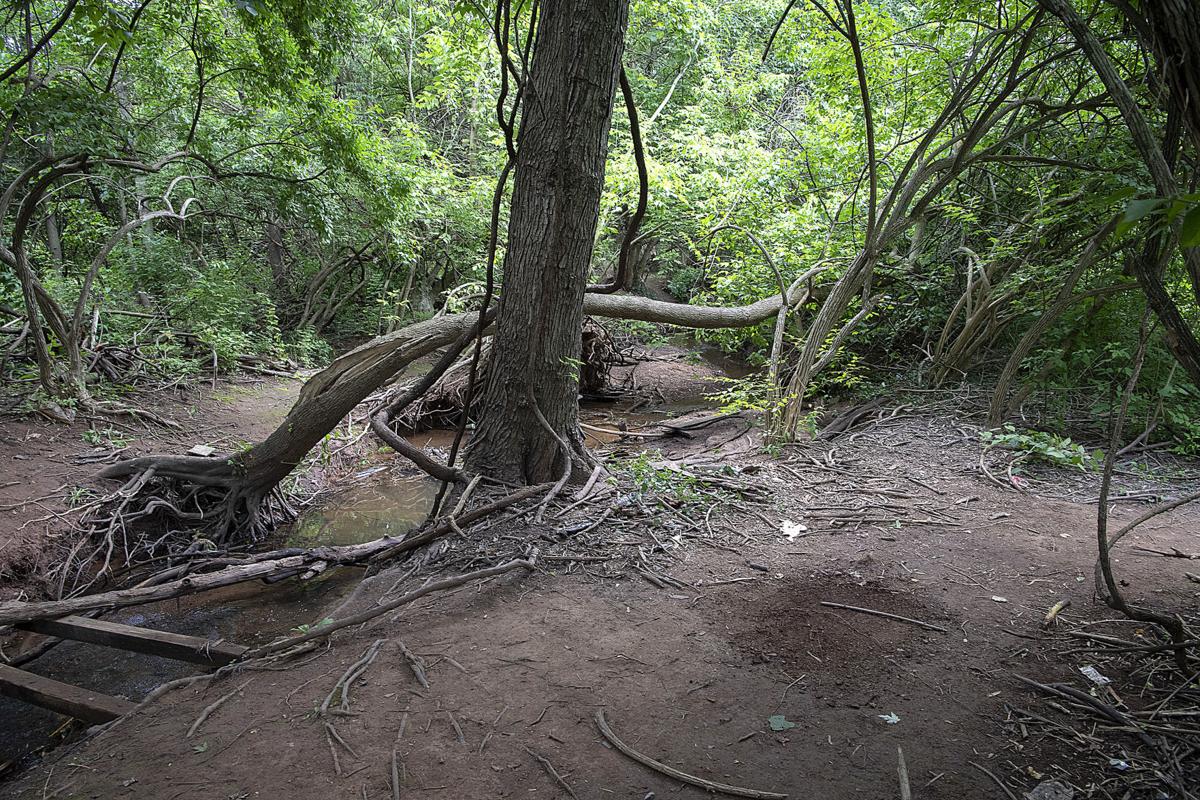 The body of a 17-year-old girl was found on the banks of this shallow creek in a wooded area off a nearby path Saturday afternoon several hundred yards off the path. 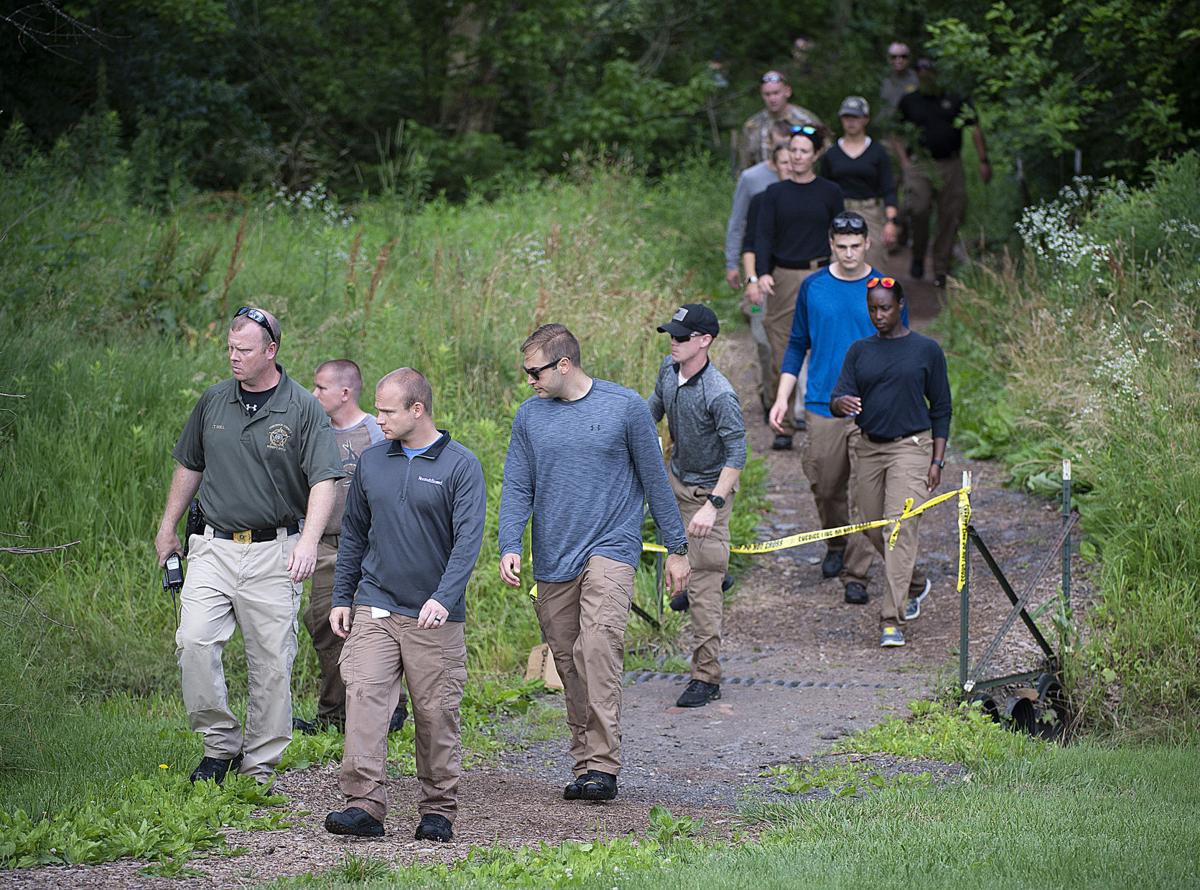 More than 20 deputies and deputy recruits returned to the scene off Briargrove Court in Farmbrook early Sunday morning to search for evidence after a body was found along a wooded path and small creek on Saturday. 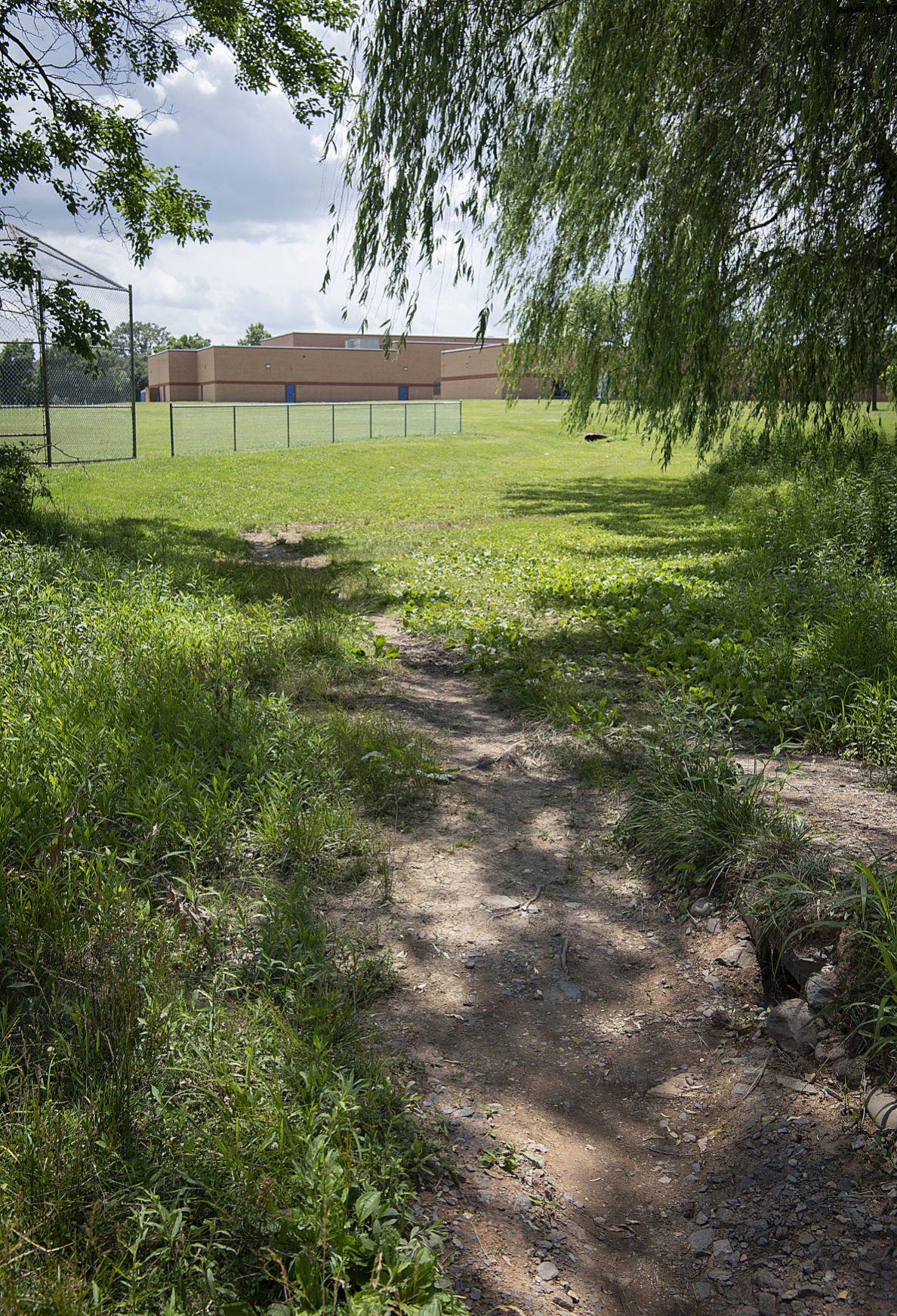 The path connects the Farmbrook neighborhood with Ballenger Creek Middle School shown here. It begins at Briargrove Court. The body of a 17-year-old girl was found Saturday afternoon several hundred yards off the path.

A nearby neighbor in the Farmbrook area places colorful balloons at the entrance to the path off Briargrove Court where the body of a 17-year-old girl was found Saturday afternoon.

The body of a 17-year-old girl was found on the banks of this shallow creek in a wooded area off a nearby path Saturday afternoon several hundred yards off the path.

More than 20 deputies and deputy recruits returned to the scene off Briargrove Court in Farmbrook early Sunday morning to search for evidence after a body was found along a wooded path and small creek on Saturday.

The path connects the Farmbrook neighborhood with Ballenger Creek Middle School shown here. It begins at Briargrove Court. The body of a 17-year-old girl was found Saturday afternoon several hundred yards off the path.

Isabelle Weissend takes a walk in her neighborhood in Ballenger Creek almost daily in order to destress.

Weissend, 19, will start on the sidewalk in front of her house on Briargrove Court in Farmbrook, walk a few hundred yards and then hop onto a path through the woods that eventually leads to a secluded area along Pike Branch Creek, near a partially-built treehouse.

She started at around 4:45 p.m. Saturday. When she reached the treehouse area, she discovered a mysterious substance in the dirt — which turned out to be blood — and then, something more shocking.

“It looked, like, purple to me,” Weissend said Sunday about the blood. “Like soda sitting in the sun, it gets like bubbly and syrupy and stuff, so I thought it was grape soda. ... And then I looked to the right, and I just saw the girl’s body laying, kind of on the bank of the creek.”

When Weissend saw the body, and that the girl wasn’t moving, she went home and told her family to call for help.

That call triggered an investigation into the death of a 17-year-old girl from Hagerstown, which has been ruled a homicide. According to a news release Sunday, the girl had “apparent injuries.”

The sheriff’s office did not identify the deceased, but said the body had been taken to the Office of the Chief Medical Examiner’s Office in Baltimore for an autopsy to be conducted. They said in a Facebook post Saturday “there is no danger to the public,” but there was no information Sunday if any suspects had been apprehended. Dozens of Frederick County Sheriff’s Office deputies and deputy recruits were seen combing the area Saturday night and Sunday morning looking for evidence.

Sheriff Chuck Jenkins said in a text message Sunday evening that the homicide remained under investigation and that no arrests had been made. He also dispelled a rumor that three men had been taken away in handcuffs.

Taylor Clarke, a spokeswoman for the sheriff’s office, added in her own text message: “At this point Investigators believe that this was a target specific incident, not a random crime of violence. We absolutely can’t comment any further than that as it will cause [detriment] to the investigation.”

Nelson Gonzalez, Weissend’s father, said he remembers his daughter coming into the house and yelling that she found a body. Then, he went to look where the body was laying.

Many kids often hang out at that spot alongside Pike Branch Creek, near where the platform of the almost built treehouse was placed on a tree, Gonzalez said.

Gonzalez thought of his seven kids as soon as he heard the news from his daughter.

“It was shocking ... The first thing I thought about is it could have been my own daughter,” he said.

Gonzalez moved to the area from near Silver Spring over a decade ago because Frederick County seemed like a nice place to raise a family, he said. He has lived in his current house since late last year. He described the area as quiet and peaceful, and that many of his neighbors are friendly.

Several of his neighbors on Briargrove Court agreed.

Mark Blum has lived there for almost three years. He said that kids often goof off in the neighborhood, including near the half-built treehouse—but Saturday was different.

“Obviously, this is not kids stuff,” Blum said of the body being found.

Like Gonzalez, Blum immediately thought of his own kids when he heard the news. He hopes those responsible are arrested and that justice is served.

“We have six kids ... it’s the first thing we did, was get a text from all of them telling us they were OK,” Blum said outside his front door Sunday.

Several residents from throughout the Farmbrook community spent Sunday driving to the end of Briargrove Court to pay their respects.

One person tied some balloons around the first of two small footbridges on the path through the woods, a tribute to the 17-year-old girl.

Weissend said the treehouse area has been a peaceful spot since her family moved there.

“Since December, I would always go there,” she said. “It was just like a safe space to just get away and stuff, so six months, it’s been fine. When I go down there, there’s a family that goes down there, sometimes I just see teenagers like my age down there … it’s usually safe, I have no issues with the people that I see down there.”

She said she thinks of the family of the girl often.

Tykerria Dawson is being remembered as a happy, "bubbly" young woman who had big dreams.

Now that her murderers have been identified as underage teens and as such have been charged as adults with first degree murder; how about the states attorney's office stand in front of the public and, again, attempt to validate their decisions to charge those who murdered the Frederick Fair goer as juveniles who will never get the punishment they deserve. Is it more egregious flor a black person to murder a white person than a black person to murder a black person..

This is a sad story to read, can't imagine the pain her family is feeling right now. God Bless them.

As far as I can tell, there is no body shown. Just a photo of the area. I think the FNP and Sheriff provided as much detail as necessary while being respectful. If the article only shared that there was a dead person discovered on the trail, you would certainly be asking for more details. We know the who (17 year old), what (murder), where (BC trail) and when (this weekend). Perhaps we'll learn the other who and why at some point. Very sad that this young lady did not have a chance to realize her potential.

A good journalist cites facts (from all angles). Gathers witnesses and questions authorities. It can't be an easy job.

I don't think they needed to add the eyewitness account to finding the body. That was gross and disrespectful.

Not sure how the Sheriff Jenkins connects and justifies "no risk to the public" to "we have not arrested anyone for this crime". Is that suppose to make residents feel safer? If it was a targeted crime, does that mean the murderer wouldn't harm others? Evil begets evil. God helps us all. Our sincere condolences to the deceased family.

dancing donna - The police department would not say that if they were not confident. It is clear they know more than they can share at this time. I'm sure there will be an update once they can release information with harming the investigation.

Frederick News Post doesn't care about the Police or Human Life. They care about selling newspapers.

So the. Stop reading it and move on.

This reporter and the entire management team of this "paper" should resign or be fired immediately. The graphic, unnecessary detail in this "news report" is horrific. The victim is a human being, someone's child. Absolutely unacceptable, FNP. Your lack of journalistic standards and judgment is appalling.

Absolutely agree, and wanted to emphasize she was a minor so it should all be treated with even more discretion. Disgusting.

They were not describing the body so this is pretty standard. What makes you think the parents/family do not want to know every detail? I would. And they will in court someday anyway.

Disagree. People need to know about horrible crimes like this -- so they can avoid dangerous situations such as this poor young woman encountered, and so that we get the support for policing and other law enforcement needed to bring such vicious criminals to justice, and hopefully deter some others. FNP was correct in publishing what they did.

The police obviously know more than they are saying. If the girl was targeted they either have the person in custody or know where to find him/her. Probably, a him.

God bless her and her family.