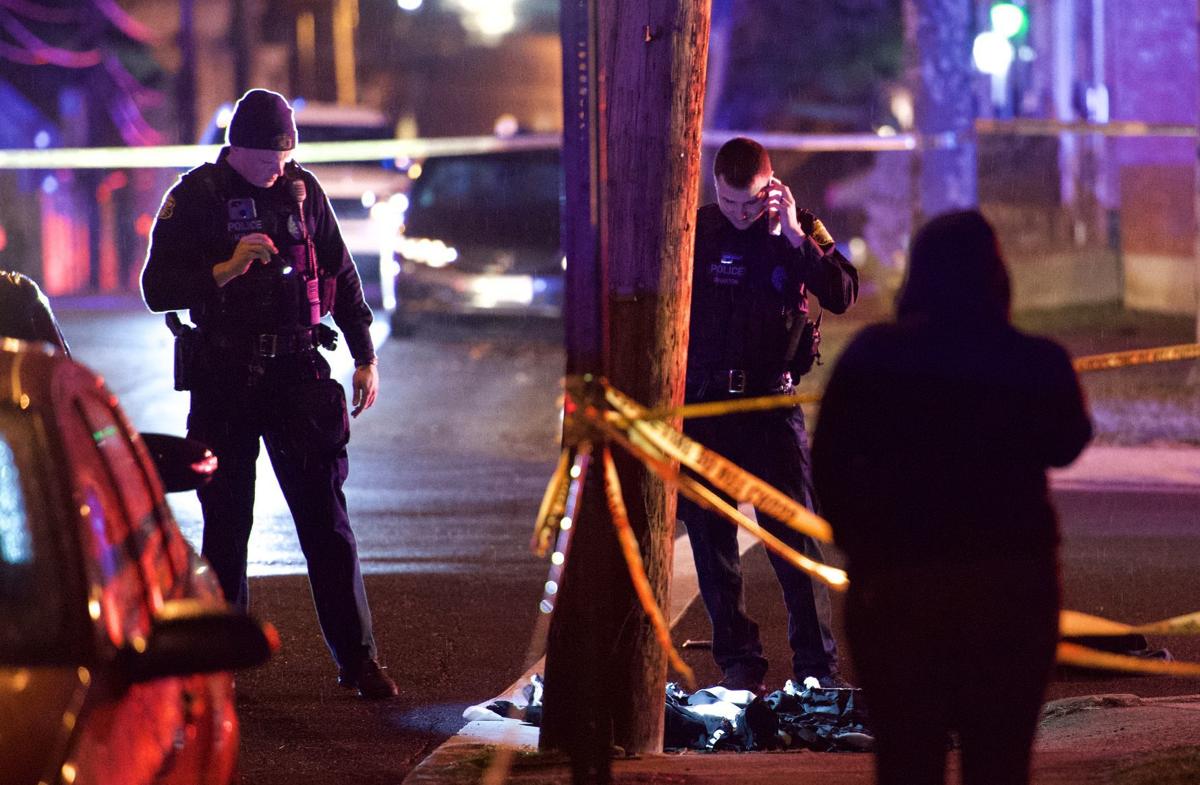 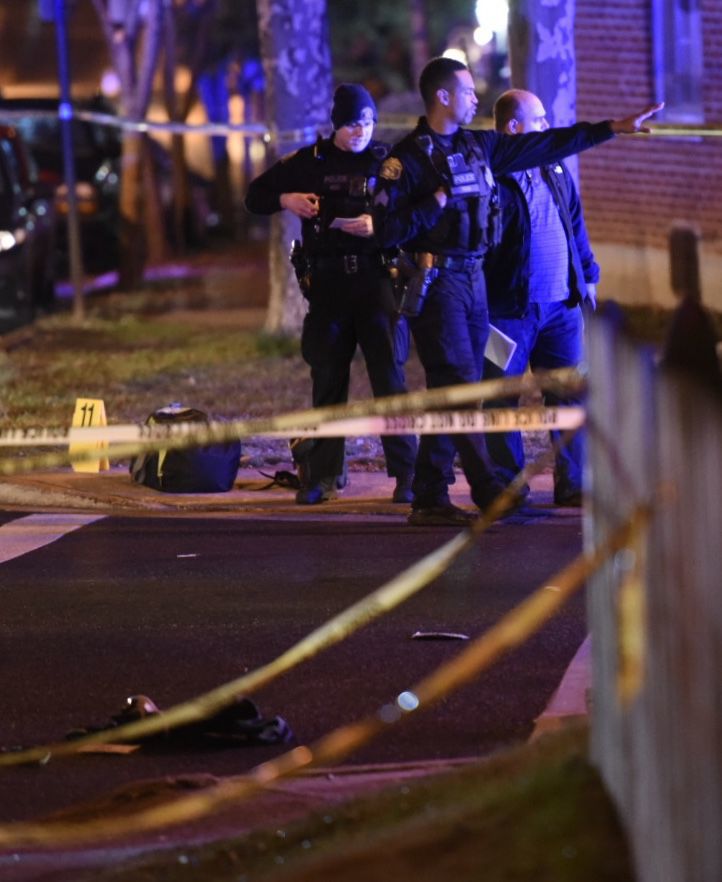 A man is dead after a shooting Friday night in downtown Frederick.

Frederick police responded at around 10:30 p.m. to West All Saints Street near South Bentz Street, where they found the man with at least one gunshot wound to the upper body, said Lt. Kirk Henneberry, commander of the Frederick Police Department’s Criminal Investigations Division.

The man was taken to a hospital, where he was pronounced dead a short time later, according to police spokeswoman Michele Bowman.

Police did not have a description of a suspect or suspects, but Henneberry said two people were seen running from the scene, according to witnesses.

No motive was available Friday night. Several streets in the area of the shooting were shut down as officers investigated.

Police have talked to some people who reported hearing the gunshots, Henneberry said. Police were asking anyone with video in the area or any other relevant information to call the non-emergency number at 301-600-2102. Tips can also be left anonymously by calling 301-600-8477 (TIPS), sent via text to 240-674-8477 (TIPS) or by email to fpdcrimetip@frederickmdpolice.org.

Pete McCarthy is the city editor at The Frederick News-Post.

OK. I'm going to tell you once again who is responsible for the problems facing downtown Frederick. The Religious Coalition hired a new director. He and I assume the board decided it was a good idea to open the shelter to anyone around the world instead of just people in Frederick County. All the things you see downtown are a direct result of this decision. People just getting out of prison and jail from surrounding communities now have a great place to call home and get fed around the corner at the Frederick Rescue Mission. Now they can sell drugs from the communities they came from and have a place to stay and eat until they make some money to move into Frederick for full-time crime. They are both half a block from this shooting and Rescue Mission property is used for daily drug dealing by these people right there on the street. This is no surprise to anybody it's obvious.

The "Social Services" are NOT I repeat are NOT responsible for what is happening. They are there to help people that want and need them. These folks don't want help.

However, providing shelter and feeding people from outside the community, think Baltimore and Hagerstown and DC (prisons and jails) or anyplace else really and basically inviting them here IS THE PROBLEM.

Now, if you want to get political about it then look at the board at the Religious Coalition and tell me what "party" you "believe" they are from.

BTW, the cat is outta the bag now. It's too late to go back to not inviting criminals to town. But, there needs to be some changes to the leadership and board of said "Religious" organizations to stop the tide of crime they have created in Downtown Frederick.

You're welcome. I'll keep telling the truth until something changes. It will not change until changes are made to the folks who created this issue in the first place. Getting paid 100k to ruin a city is good work if you can find it. Find it someplace else.

Now, all you good folks know who to contact to correct the obvious mistake. I'd ask them to fix it today.

Yet more crime not stopped by Sheriff Joke Jenkins. He and Plain Blaine sure had a chance to do something about it, but they chose to arrest hard working illegal immigrant workers instead. This is the direct result of Jenkins' letting drugs and shootings go sky high while he photo ops with Republican big wigs.

Yea that’s it or maybe climate change is causing more violence in Frederick.

Let's hope that law enforcement is able to quickly apprehend these thugs, and that our judicial system punishes them to the fullest extent of the law. Maybe they could consider transferring this case to the Feds, where the violations and their punishments are clearly spelled out, and are much more severe than found in Maryland law.

May the victim's friends and family find peace.

Criminals and their crime are not partisan. Government leaders can not steer every person (resident or visitor) to be a saint (or angel).

These comments about republican or democrat are poor character and judgement when used in conjunction with a story about someone, who is a son, and maybe a brother, father, uncle, cousin, friend, etc., who was murdered.

the saddest part about this is the callous "witty" comments Frederick residents attempt to make about some ones murder.

We are in Fredneck, Jay.

Like I mentioned before. Come on in to downtown at night to eat, drink, socialize and party, but just don’t stay too late into morning or walk too far beyond the downtown square. These instances seem to be increasing in downtown areas, fights, stabbing, shootings, robberies. Maybe city officials need to designate a “safe place”. Maybe that’s why they ar pushing the downtown Elites Social Club, (Grand Hotel & Conference Center). A safe place to discuss these matters.

Meanwhile Democrats in Annapolis are pushing to ban people from lending/ selling their children or friends a shotgun. Don’t worry, Democrats have the answer to stop these shootings. All will be well! Too bad that gun buyback program Ron Young wanted was too expensive. I’m sure the murderer would have sold the gun for a Starbucks gift card or a hundred bucks. lol

Because a gunfight in the streets is so much better than a shooting. Yes, let’s have the whole country turned into the OK Corral, just to make you feel like a tough guy.

Correct, seven. These tough little guys with their big guns. Take the guns and what's left is a puddle.

I think the point was so that someone could defend themselves, and also it would act as a deterrent to possible assailants if they did not know if someone was armed or not. Either way, nobody knows what happened in this situation yet, so there is not a way to tell if it would have helped or not.

Sure, there are always more to steal, unless they are taken off the streets. A gun buy back makes sense.

Our condolences to the victim’s loved ones. We on All Saints Street keep an eye out for all of us. BTW there are cameras up and down the street. Peace and respect.

How little you know, John Snow.

Tell me again just how good our police chief is. Happy Retirement.

lmao how is a police chief supposed to step in and stop something like this?

The cops can’t be everywhere or predict the future. They can only try to get there to escort your remains to the hospital and try to hold the perpetrators accountable. The only person responsible for you safety is you.

Exactly the reason we have a second amendment. Of course, Maryland has largely eviscerated the 2A over the years.

Once again, I don't care what the crime stats show -- we all know there were nowhere near this many shootings -- both raw numbers and per capita -- 30-35+ years ago.

"There are lies, damned lies, and statistics."

As I clicked on my FNP button and was waiting for the website to load I was thinking “it’s been a while since there’s been a shooting”. And low and behold, there it is ANOTHER shooting headline”.

There’s a state portal giving the crime stats since 1975 for each county. You can take out the guess. Check it out.

Statistics 101: You can manipulate any statistic by controlling the numbers.

What motive would officials going back to 1975 have to artificially inflate crime numbers?

Suggesting these instances have increased over the years having been born, gone to school and lived in this community over 60 plus years. The downtown establishment, businesses & politicians, will tend to avoid the potential negative effects, was my point.

Are you trying to say that for the most recent years, law enforcement officials are under reporting crime?

And the statistics are for murder. Not all of these are gun deaths. Baltimore breaks them down by manner of death in statistics. Strangulations and stabbings rank on their lists.