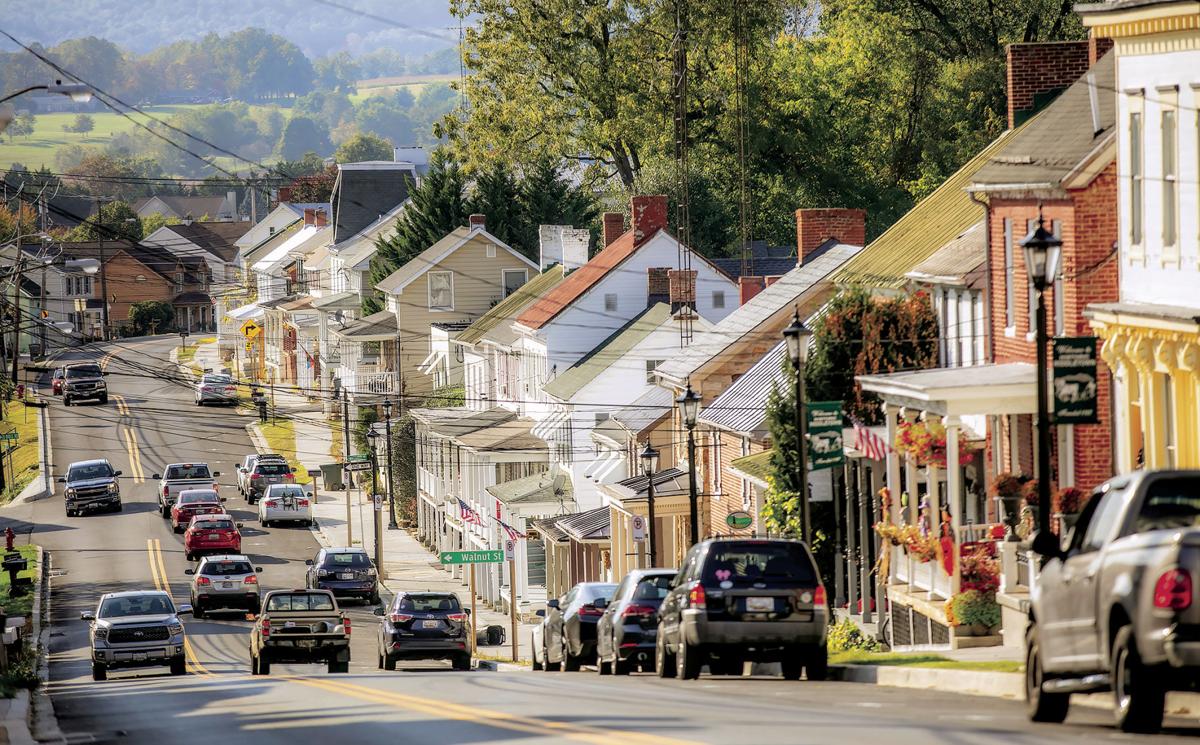 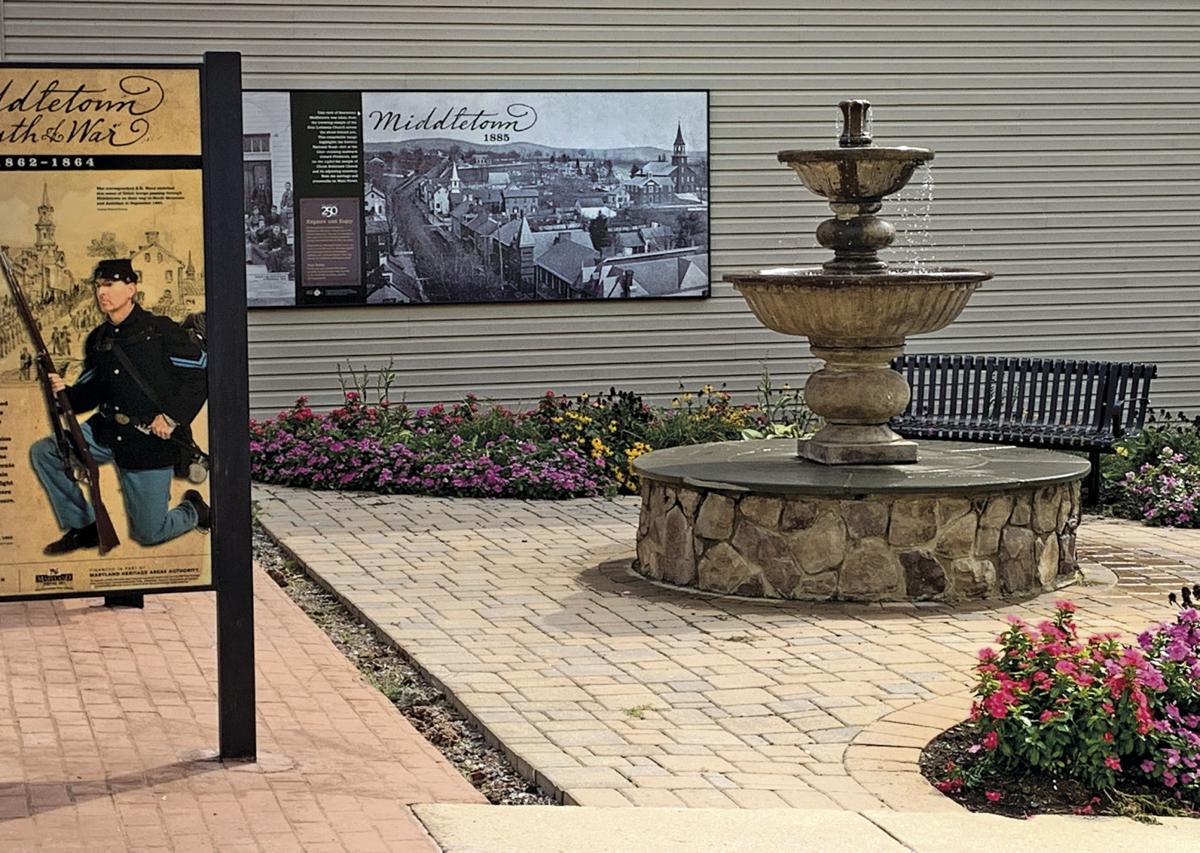 Visitors and locals alike can enjoy a seat across from Town Hall at the Middletown Heritage Park, where a historically-inspired fountain provides a pleasant backdrop. 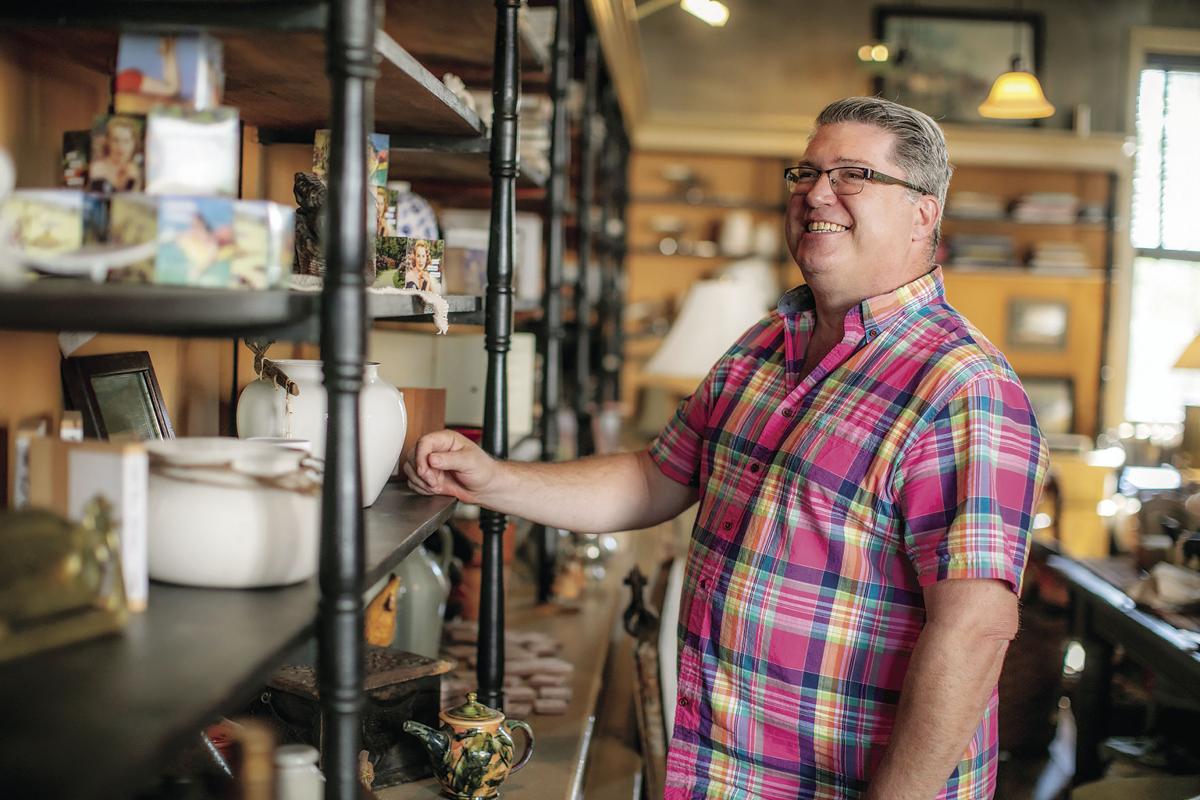 A visitor at Wren’s Nest, a community gathering space on Main Street in Middletown, checks out some of the art. 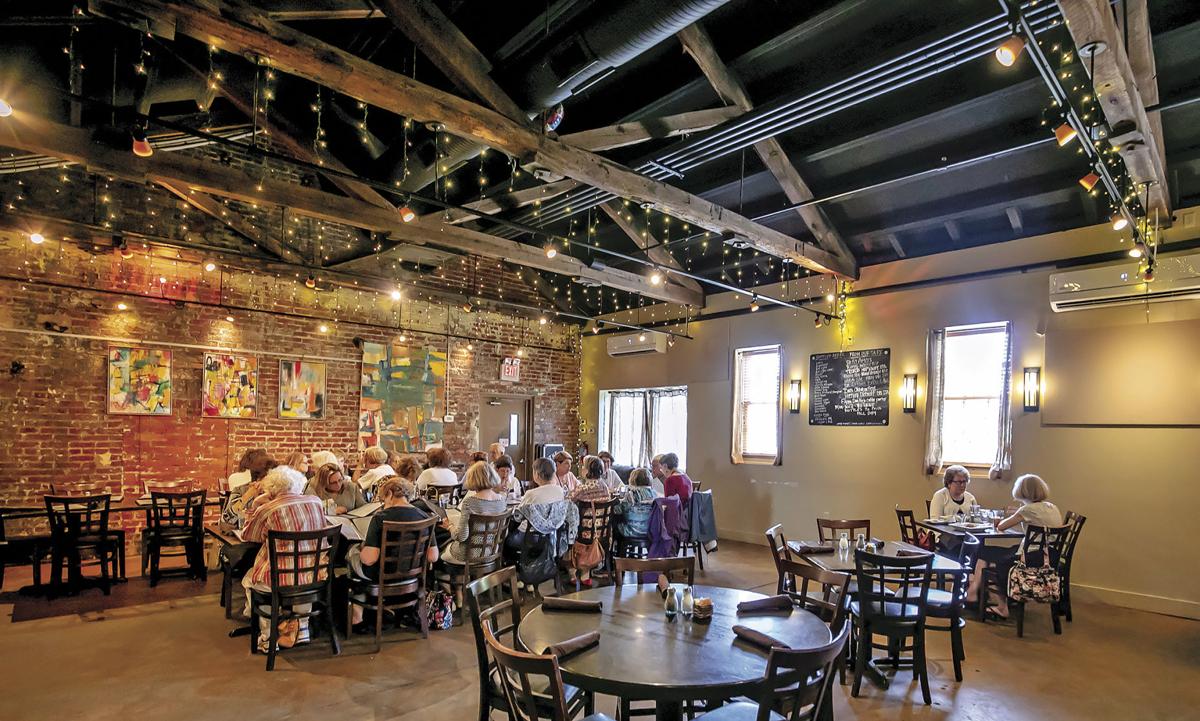 A mainstay in Middletown, The Main Cup offers both indoor and outdoor dining. Plus, it displays the work of local artists. 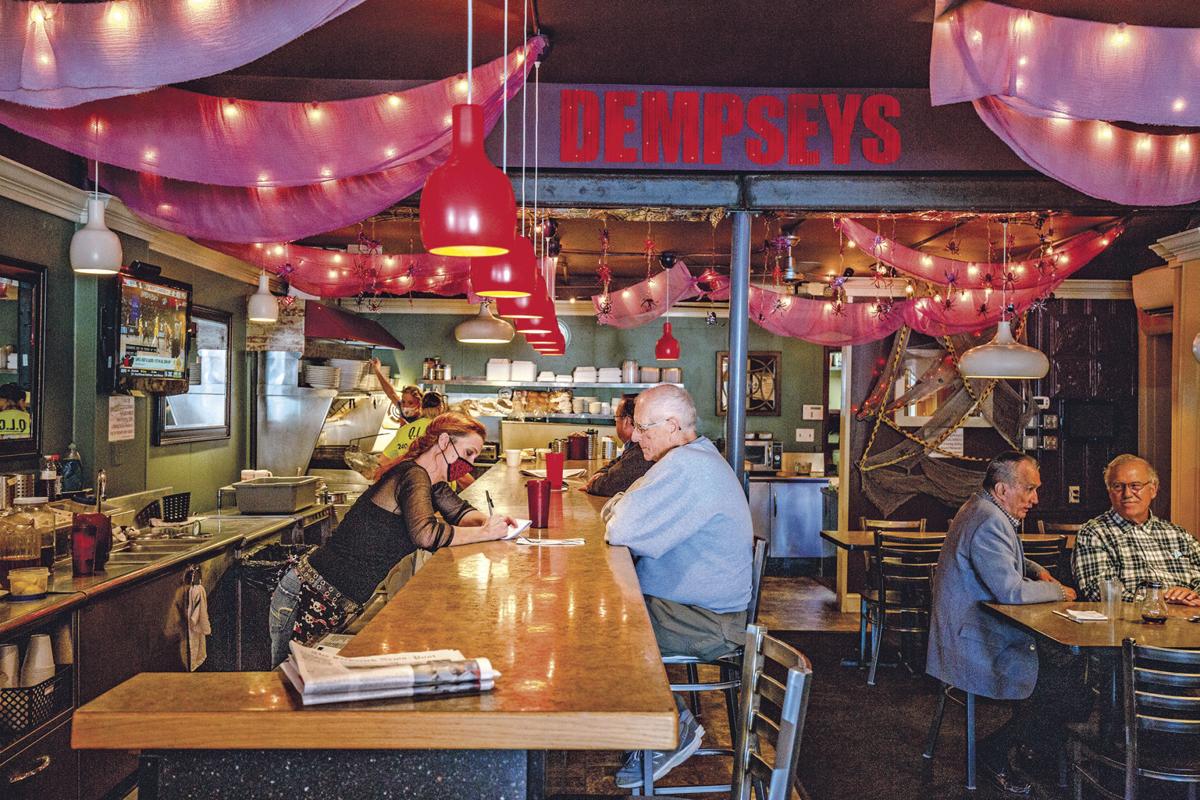 Dempsey's Grille in the heart of Middletown is renowned for its comfort foods, like Belgian waffles, patty melts and homemade crab cake.

Visitors and locals alike can enjoy a seat across from Town Hall at the Middletown Heritage Park, where a historically-inspired fountain provides a pleasant backdrop.

A visitor at Wren’s Nest, a community gathering space on Main Street in Middletown, checks out some of the art.

A mainstay in Middletown, The Main Cup offers both indoor and outdoor dining. Plus, it displays the work of local artists.

Dempsey's Grille in the heart of Middletown is renowned for its comfort foods, like Belgian waffles, patty melts and homemade crab cake.

There’s a reason Middletown, Maryland, lives by the motto “Where Charm Meets Convenience.” A mere hour by car from either Baltimore or Washington, D.C., this quaint town of fewer than 5,000 people offers a wealth of indoor and outdoor attractions, historic hot spots and dining options, perfect for a day trip with the whole family. Whether exploring the town during an outdoor walking tour, enjoying Sunday brunch or filling up on ice cream (there’s lots of it here), anyone will find something to love about a day spent in one of western Maryland’s best-kept secrets.

Here are five essential experiences to plan for when visiting Main Street Middletown.

1. Enjoy a meal at a premium dining destination.

Middletown may be a small town by anyone’s standard, but that doesn’t diminish the big taste bursting from its variety of indoor and outdoor dining spaces. The historic downtown area includes three particularly popular eateries, while more than a dozen others can be found when venturing into the surrounding valley.

For those seeking classic American fare in a setting replete with hometown comfort, Dempsey’s Grille is the place to be. Open from breakfast through dinner most days of the week, as well as for Sunday brunch, Dempsey’s has the coziest of dining atmospheres. It offers a bevy of comfort-food offerings—Belgian waffles, patty melts and homemade crab cake among them—and waitresses who call you “sweet pea” when they’re not calling you by your name.

If international cuisine is more your speed, visit Asian Cafe just a block off Main Street, where you’ll find plenty of Chinese and Japanese dishes that are certain to satisfy. All the standard favorites are here, from chow mein to hunan beef to General Tso’s chicken. Plus, it provides an easy carryout option for those who’d like to enjoy a meal in one of Middletown’s several parks and outdoor havens. (But more on those later.)

Finally, enjoy a hearty, farm-fresh meal at The Main Cup. It is named after storied Middletown figure C.F. Main, who more than a century ago began making and selling ice cream on the spot where the restaurant sits today, attracting U.S. presidents, state officials and other prominent guests. At the current restaurant, everything is made with quality ingredients—from signature cocktails like the jalapeño margarita to such dinner favorites as the balsamic grilled salmon to the deliciously decadent Jr’s New York cheesecake. Guests can enjoy them in one of four indoor and outdoor dining areas, each of which boasts a classic-yet-trendy atmosphere featuring work from local artists. This Middletown favorite is great for date night, wine with the ladies or any other number of occasions.

2. Check out other quality creameries.

While plenty of dessert options are available at the aforementioned eateries, no visit to Middletown is complete without picking up a scoop of freshly churned ice cream. This town is a true ice cream mecca, with two historic creameries operating downtown.

Established in 1933, Lee Delauter & Sons may appear on the outside to be a typical gas station and auto service shop, but inside it offers fresh, legendarily tasty scoops of ice cream. Plus, this shop has claim to a neat bit of confectionary trivia, as it holds the oldest Hershey’s ice cream license in the United States. A photo with your cone in the foreground and the in-store display boasting this factoid in the background? Now that’s an Instagram-worthy sweet treat.

In business since 2014, More Ice Cream occupies 13 West Main St., a renovated, two-story house from the 1850s that’s covered wall-to-wall with photos from Middletown High School, exuding a hometown nostalgia. The wraparound front porch is a particularly idyllic place to delight in a quality cone or milkshake during a warm spring or summer day.

3. Familiarize yourself with the local history.

The 170-mile historic National Road, America’s first federally funded highway, runs right through the heart of Middletown, but that’s just the tip of the iceberg when it comes to this small town’s place in American history.

In particular, Middletown played several fascinating roles in the Civil War. The whole town was held for ransom just a few days before the nearby Battle of Monocacy, with Confederate Lt. Gen. Jubal A. Early demanding $5,000 lest he and his troops burn the town to the ground. (The town managed to escape destruction with a negotiated payment of $1,500.) After the battles of South Mountain and Antietam, local homes and makeshift hospitals were used to care for both Union and Confederate soldiers, as well as future President Rutherford B. Hayes.

Guests can learn more about Middletown’s Civil War history and other important eras by visiting the Middletown Valley Historical Society on Main Street, where events, lectures and tours are hosted year-round. Visitors can honor local veterans who served in World War II, Korea, Vietnam, the Gulf War and the War on Terror at the Middletown War Memorial.

4. Journey through 250 years of architectural design.

As Middletown has stood since 1767, more than two-and-a-half centuries of evolving architectural design are evident as you walk, bike or drive through town.

In particular, the town’s three-mile stretch of the National Road acts as an essential time line of Middletown’s development, with Victorian homes toward the east end of the road to German-influenced design, Gothic Revival, Greek Revival, Federal style, log cabins and Queen Anne homes along the route. Travelers venturing farther down Jefferson Street will see the site of Middletown’s historic free Black community, where non-enslaved African Americans abided prior to the end of the Civil War.

To help guests critically analyze the town’s different periods of development, Middletown offers six walking tours, each focused on a different era of Middletown history. Printed brochures are available at Town Hall, the Main Street Middletown office or the Frederick Visitor Center. An interactive map is also available at bit.ly/3txA3tJ.

5. Take in the great outdoors.

Walking tours aren’t the only way to make the most of the fresh mountain air in and around Middletown. Parks, outdoor entertainment and other open-air offerings abound throughout the town.

For a more placid way to engage with the town’s history, visitors can enjoy a seat across from Town Hall at the Middletown Heritage Park, where a historically-inspired fountain provides a pleasant backdrop for those who wish to read various signs and posters detailing local landmarks and significant events. In the courtyard by The Main Cup sits Main Street Middletown’s first public art piece, “Art on Main,” a brightly-colored sculpture that celebrates the town’s character and is one in a series of companion pieces that can be found in each of the Frederick Main Street communities.

Finally, those wishing for a more active way to enjoy Middletown’s fancifully airy milieu can enjoy a number of trails, water features, dog parks and ball fields, or can venture to the Appalachian Trail access point just outside of town.

A young George Washington, while working as a surveyor with Gen. Edward Braddock, declared the Middletown Valley the most beautiful sight he had encountered in his travels. More than 250 years later, that remark holds true, as Middletown remains one of western Maryland’s most charming, family-friendly and endlessly entertaining hot spots. For more help planning your visit to Main Street Middletown, visit mainstreetmiddletown.org.