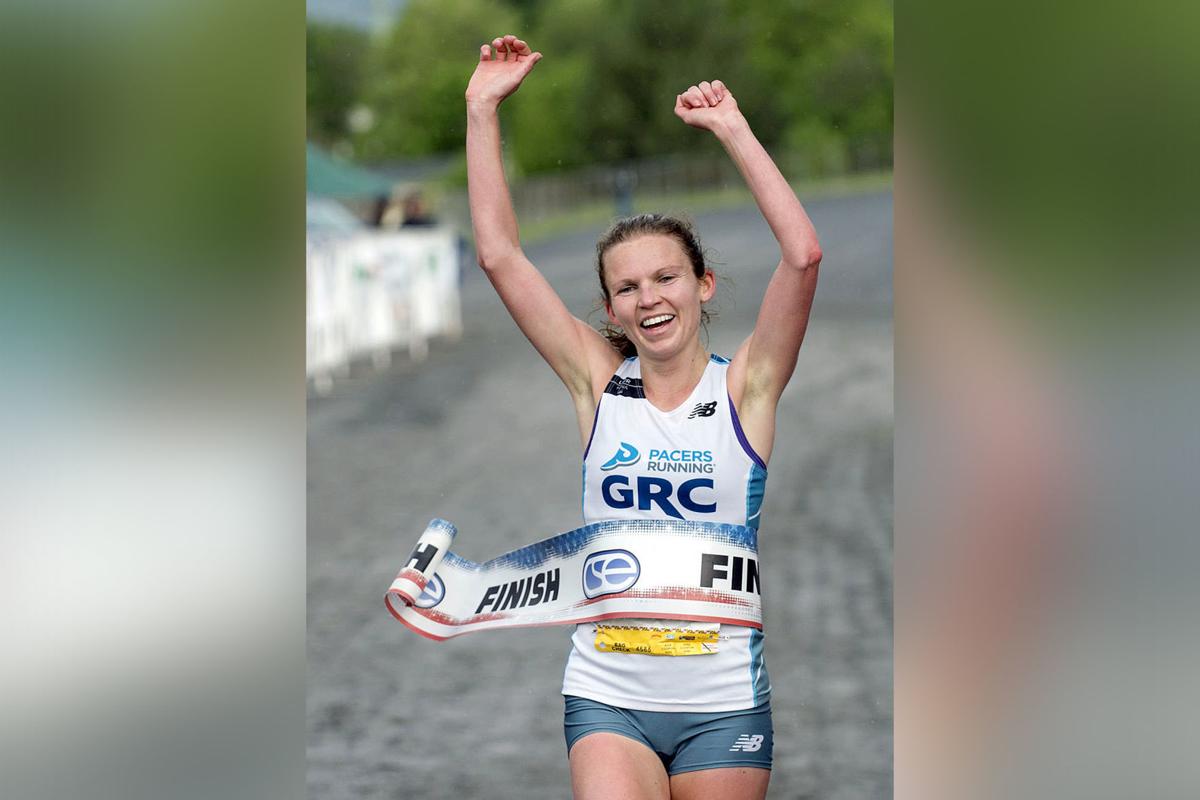 Frederick’s Stephanie Reich won the women’s crown in 1 hour, 16 minutes, 14 seconds. She was the second overall finisher behind Silver Spring’s Dan Jacobs, who broke the finish-line tape in 1:14.17. 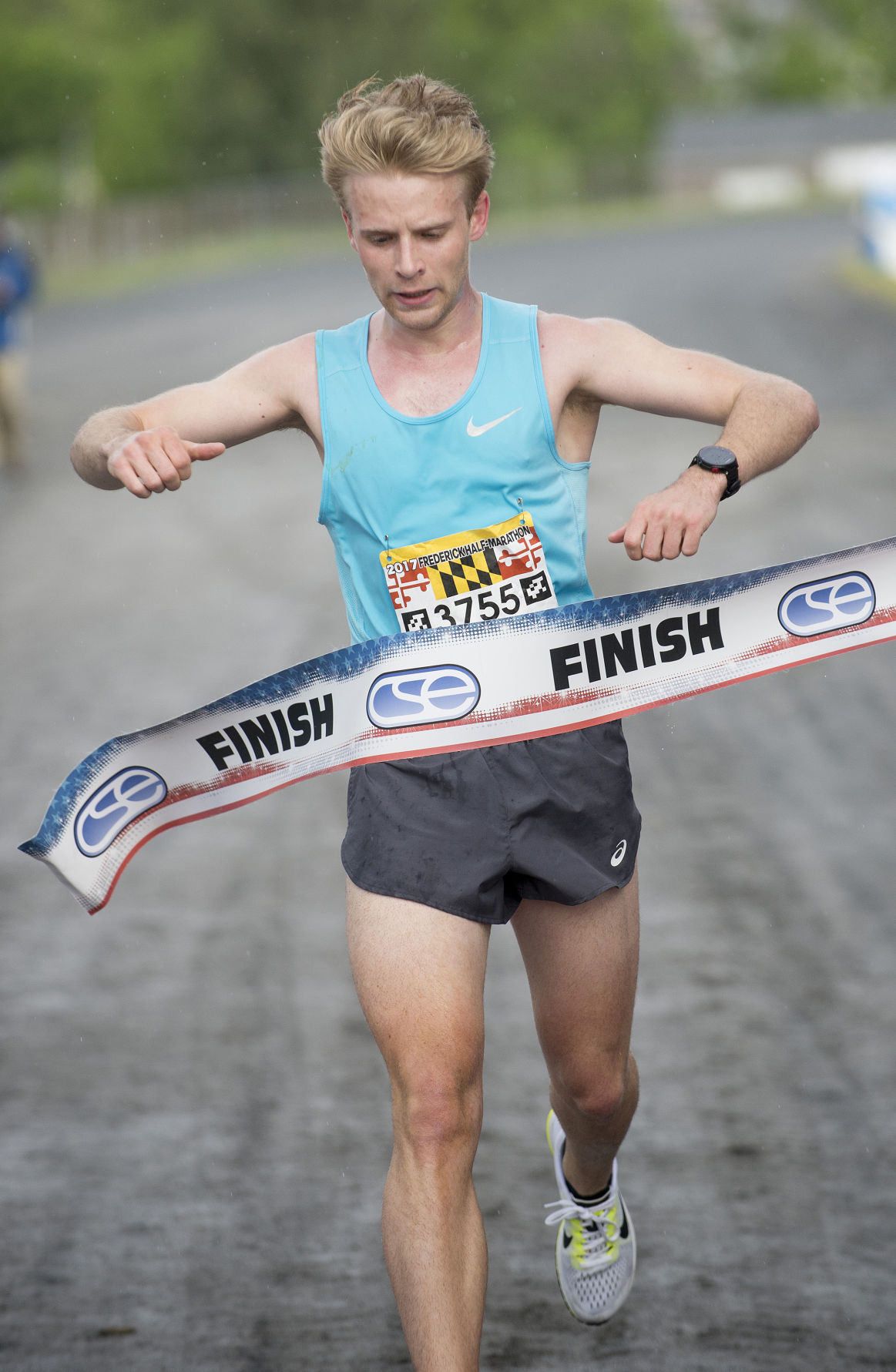 Dan Jacobs, of Silver Spring, was the overall winner of the Frederick Half-Marathon.

Frederick’s Stephanie Reich won the women’s crown in 1 hour, 16 minutes, 14 seconds. She was the second overall finisher behind Silver Spring’s Dan Jacobs, who broke the finish-line tape in 1:14.17.

Dan Jacobs, of Silver Spring, was the overall winner of the Frederick Half-Marathon.

Had Stephanie Reich strictly followed her doctor’s advice, she wouldn’t have run in Sunday’s Frederick Half-Marathon.

She wouldn’t have repeated her women’s title. Nor would she have gone into the record books as being the first female runner in the 15-year history of the event to finish as the overall runner-up.

“I haven‘t been feeling well this season,” Reich said. “My doctor said she didn’t want to read about me in the paper, like [I collapsed] on the side of the course. I guess now, she’s going to read I ran in the race anyway.”

While doctor’s advice gave way to a runner’s passion for a race, the news was all good in the end.

Reich, who took the lead one mile into the race and never let up after that, won the women’s crown in 1 hour, 16 minutes,16.21 seconds. Her time was actually a minute slower than her time last year. The pace of race was slower overall in the cool and damp conditions.

More importantly, Reich was the second overall finisher behind Silver Spring’s Dan Jacobs, who broke the finish-line tape in 1:14.17.12.

Race officials later confirmed Reich was the first female runner to place second in the half-marathon overall. She was fifth in last year’s race.

Distance runners often don’t like to jump to a lead so early in a race, but it worked out for Reich anyway.

Reich, 25, had already pre-registered to run in the half-marathon, but was still hedging on committing to the race until just before the weekend.

“I definitely wanted to defend my title, but there was some tough competition out there today,” Reich said. “I was really, really happy I was able to pull it off.”

Her approach to Sunday’s race was not complicated. She normally doesn’t go into any long-distance races with a lot of expectations.

“I didn’t worry about pace too much,” Reich said. “I just wanted to be comfortable. Then, in the second half of the race, that’s when I started to really compete.”

For the first mile, Reich was challenged by a former two-time champion, Julia Roman-Duval, of Howard County. The pair stayed close, then Reich began opening up a big lead on Roman-Duval, who eventually finished third in the women’s division (1:19.49.35).

About halfway through the race, there was little doubt as to who would emerge as the winner. “You just run comfortable in the first half,” Reich. “Then, I was feeling good, so I started rolling a little bit.”

Much of the race seemed effortless on Reich’s part. “I love it,” she said. “I train on these roads every day. So, it’s great.”

Reich also feeds on the energy of the spectators lining the course. Even in the early-morning hours of the event, there were plenty of people standing on the sidewalks, on street corners and in the front yards of their homes throughout the city.

“There were a few less spectators this year, obviously, because of the rainy weather, but that’s one of the reasons why I wanted to come back and run this race — the spectators,” Reich said. “All the people coming out in the neighborhoods, it’s just great.”

Being paced by a former running mate at Thomas Johnson High School was a big help for Reich. Savanna Plombon, 23, finished second in the women’s division at 1:17.55.97, sixth overall.

“I was expecting her to hang with me,” Reich said. “She ran a great race, too.”

Plombon, who is in graduate school at West Virginia University after running at TJ with Reich, came to Frederick for the half-marathon. She liked the overall flow of the course.

“I’ve run bits and pieces of this course,” Plombon said. “The the hills, the flats, it’s a good mix.”

Reich’s husband, Stewart, is also a distance runner, but did not compete on Sunday. He was out on the course, cheering his wife on.

“We both ran in a track meet on Friday. I think he is still a little banged up,” Reich chuckled.