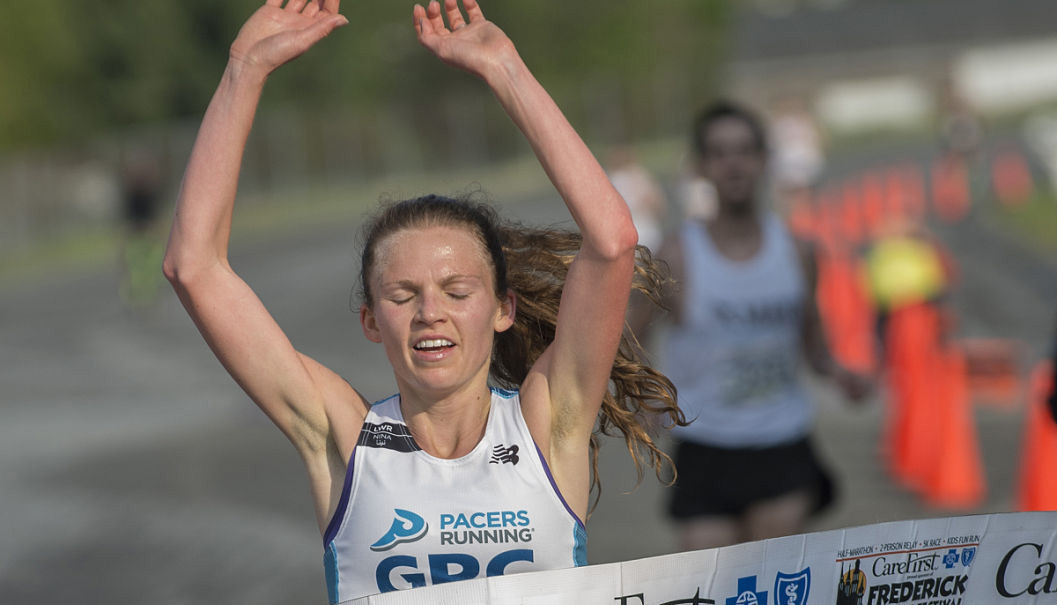 Frederick’s Stephanie Reich crosses the finish line of Sunday’s Frederick Half Marathon to win the women’s title in 1 hour, 15 minutes, 44.33 seconds. The former TJ standout was fifth overall in the race.

Ethiopian-born runner Girma Gebre crosses the finish line to become the overall winner in 1:08:09.47 in Sunday’s Frederick Half Marathon.

Frederick’s Stephanie Reich crosses the finish line of Sunday’s Frederick Half Marathon to win the women’s title in 1 hour, 15 minutes, 44.33 seconds. The former TJ standout was fifth overall in the race.

Ethiopian-born runner Girma Gebre crosses the finish line to become the overall winner in 1:08:09.47 in Sunday’s Frederick Half Marathon.

Stephanie Reich was a last-minute entry in Sunday’s Frederick Half Marathon.

As late as Friday, the women’s winner of last fall’s Market Street Mile wasn’t even thinking about the half marathon, much less winning it.

“I ran a track race on Friday; I have been training for track,” Reich said. “But I’ve always wanted to do this race. I had always seen it as a spectator and, since I was in decent shape, I thought I would give it a try.”

Not only did Reich defeat the two-time women’s champion, she did it in event-record time.

Julia Roman-Duval, of Columbia was second in the women’s division at 1:16.41. She had won the previous two half marathons.

A pair of Ethiopian runners who live in Washington took the top two spots overall.

Reich (née Bryan) is no stranger in Frederick running circles. She was a multiple-time News-Post all-county pick in the running sports while at Thomas Johnson High School.

“But I couldn’t convince him to run this time,” she said of Sunday’s featured event of the two-day Frederick Running Festival. “He was here today with me for support.”

The reputation of this local event attracted Reich. She’s very familiar with the terrain in the Frederick city area.

Reich was facing a formidable opponent in Roman-Duval, a 33-year-old mother of three who is fresh off a tryout for the U.S. Olympic marathon team earlier this year. She was well-aware the red-haired Roman-Duval could make a move at any time on the course, possibly blowing past her somewhere along the way.

“Julia is an excellent runner,” Reich said. “I really thought she was going to beat me because this was my first half marathon ever and she’s so experienced, running at the Olympic trials and everything.”

Reich was also aware another former women’s champion was in the mix. Sage Norton, 36, of Myersville, was in pursuit. The 2013 half marathon women’s champion finished third in the women’s division (1:23:36.37).

“I was watching for either Julia or Sage to pass me the whole time,” Reich said. “I expected one of them to come up, but it didn’t happen.”

Similar to the Market Street mile, Reich did something contrary to distance-running strategy. She went out strong from the starting line, taking the lead from the start and maintaining it the rest of the way.

“I accidently went out a whole lot faster than I wanted to,” Reich said. “It was a little scary, but it all worked out.”

She was glad the course had been re-worked to eliminate, among other things, the steep grade on Highland Street. “That hill was brutal,” Reich said.

Roman-Duval was anything but disappointed over not making Sunday a three-peat performance. She was the complete opposite.

“The times were really fast this year,” Roman-Duval said. “I got a personal best. I’m very happy with that.”

Reflecting on her trip to California for the Olympic trials, Roman-Duval said: “Being able to run with some of the fastest runners in the country is a once-in-a-lifetime experience.”

Gebre and Babo ran together, on pace, before Gebre broke away at the halfway mark. During the final two miles, he could be seen favoring his left leg.

Later, Gebre said through an interpreter he was experiencing hamstring issues but still managed to win the race.

Among the thousands of runners to participate in the Frederick Running Festival, about 50 have come back each year to race.

Lots better than coming in third....