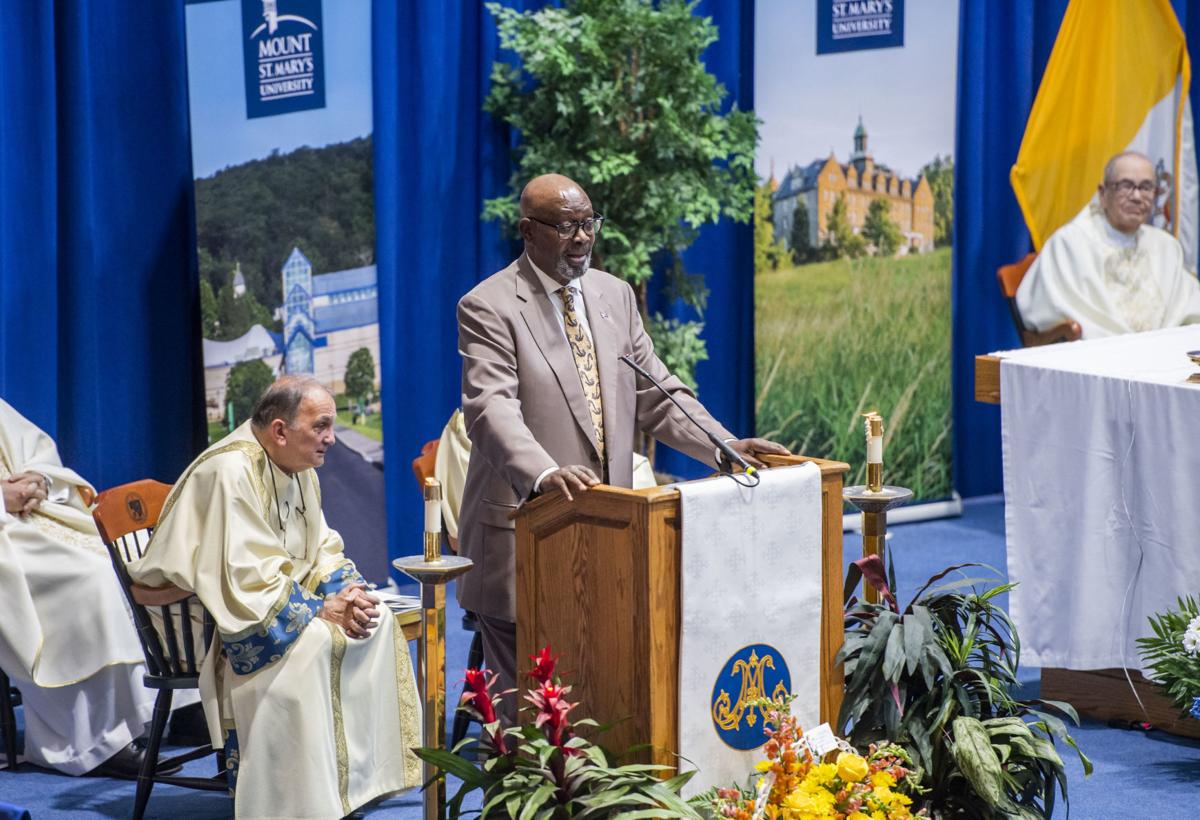 Fred Carter delivers his eulogy at the funeral mass on Thursday afternoon for Jim Phelan, the former basketball coach for Mount St. Mary’s University. Carter was the first Black student to attend Mount St. Mary University and played on the basketball team 1965-1969. 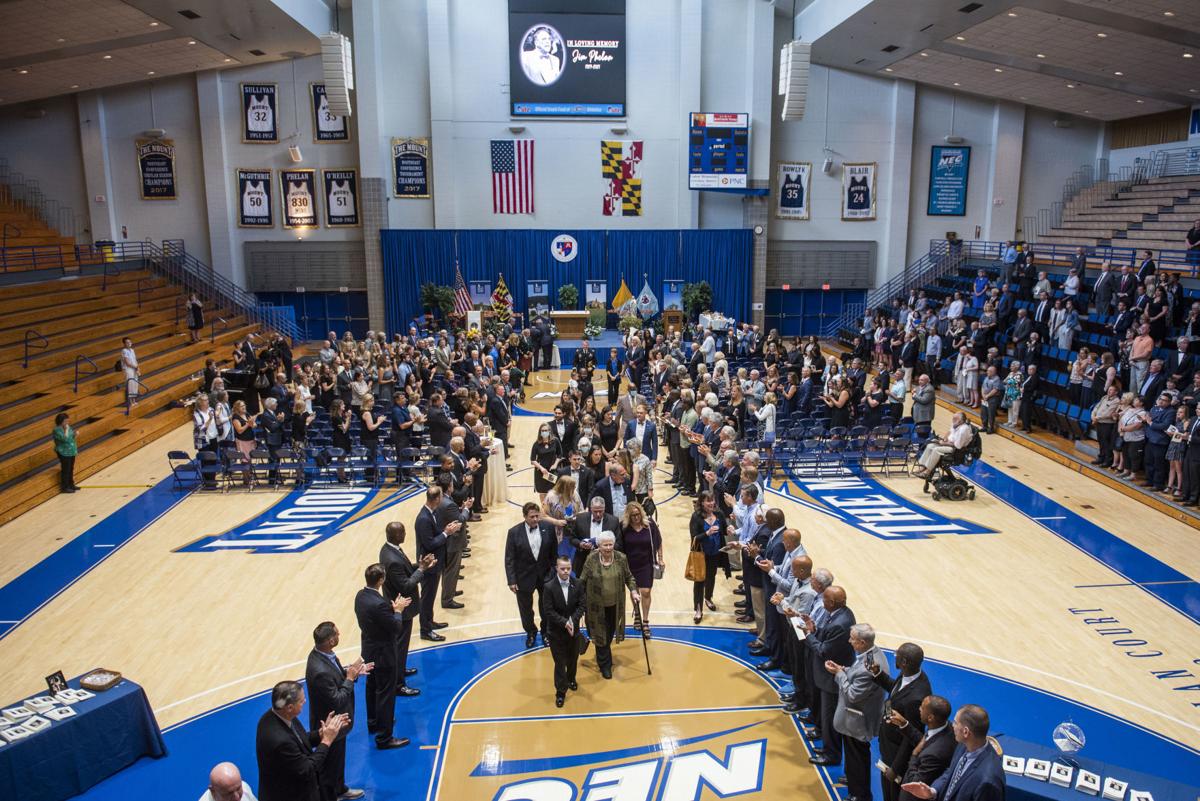 Former coaches and players line up as the family members of Jim Phelan, the former basketball coach for Mount St. Mary’s University, leave his funeral mass on Thursday afternoon at Knott Arena. 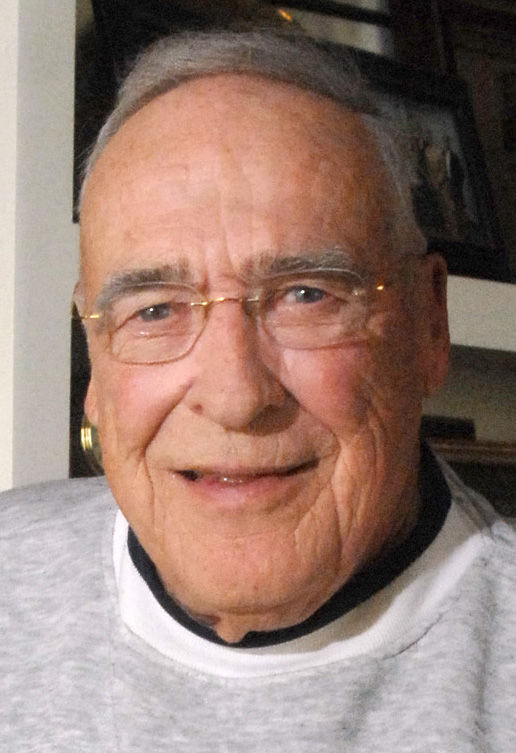 Fred Carter delivers his eulogy at the funeral mass on Thursday afternoon for Jim Phelan, the former basketball coach for Mount St. Mary’s University. Carter was the first Black student to attend Mount St. Mary University and played on the basketball team 1965-1969.

Former coaches and players line up as the family members of Jim Phelan, the former basketball coach for Mount St. Mary’s University, leave his funeral mass on Thursday afternoon at Knott Arena.

“Old habits die hard,” the most accomplished player in the history of Mount basketball said.

Now 76 and diabetic but otherwise in good health, Carter happened to be smoking a cigarette when he first met Phelan on a Philadelphia playground in the mid-1960s, an encounter that would shape the rest of their lives and change the face of Mount St. Mary’s forever.

During their conversation, Carter cupped the cigarette in his hand and put his hand in his pocket. When the conversation was over, he took his hand out of his pocket, uncupped his hand, and resumed smoking. He said it was a trick he learned on the streets.

Carter was drafted by the Baltimore Bullets in the third round of the 1969 draft and played eight seasons in the NBA for three different franchises. He went on to become a television analyst for ESPN and NBA-TV. He is known to have popularized the first bump.

And, on Thursday, he was delivering a heartfelt eulogy on Jim Phelan Court, before roughly 800 people gathered inside of Knott Arena, to the man he says made it all possible.

“He was a good man, a good coach who was chosen. God chose him to open the doors at Mount St. Mary’s to make it a culturally diversified school,” Carter said of Phelan following the service.

As the old story goes, Phelan drove Carter from Philadelphia, where he was one of the top young players in the city, to tiny, rural Emmitsburg to show him Mount St. Mary’s and try and convince him to play there.

At some point during the trip, Carter asked Phelan how many other Black students attended the school, and Phelan told him to look in the mirror because that would be the only Black face he would see.

Carter enrolled as the first Black student to attend Mount St. Mary’s and, over four years, became one of the school’s all-time leading scorers in basketball and helped Phelan win 81 games. In December 2007, he became the first Mount player to have his jersey number (33) retired.

His banner hangs in Knott Arena near the one commemorating Phelan’s years of service (1954 to 2003) and number of wins (830), which are the 14th most in NCAA history and the 18th most in the history of college basketball, respectively.

More importantly, Carter paved the way for generations of black students and Black athletes and Black coaches to shape their futures on the Mount campus.

Two of Phelan’s successors as men’s basketball coach, Milan Brown and Jamion Christian, are African Americans. Brown served on Phelan’s staff before succeeding him in 2003. Christian was a player and a team captain for Phelan.

“I wish people would remember that,” Carter said. “Coach Phelan changed the landscape of this university by bringing a Black student into the school.”

There were other stories shared during the service that spoke to Phelan’s influence and character.

Phelan’s daughter and the school’s athletic director, Lynne Robinson, shared an anecdote during her emotional eulogy that highlighted the coach’s competitiveness and quick wit.

During one game, a Mount player was issued a technical foul, Robinson recalled. Phelan summoned the referee over the sideline and asked why his player received the technical. The referee explained the player said that the official stunk.

Phelan glanced at the ref and said, “Well, you do stink.”

At the end of lively debates on a wide range of topics at the Phelan household, just a half mile from the Mount campus, the coach would remark, “You are entitled to your own opinion.”

The service was attended by many of Phelan’s former players, assistant coaches and successors. Dottie Phelan, his wife of nearly 67 years, calls them her boys, and she was delighted to learn that many of them would still be paying her a visit at the family home, where the Phelans loved being hosts over the course of Jim’s long career.

As the processional out of Knott Arena began Thursday, the theme music from the movie “Rocky” played, which was a tribute to Phelan’s Philadelphia background and the toughness he developed while serving in the U.S. Marine Corps during the Korean War.

The main isle for the processional was lined by former Mount coaches and players, and Dottie Phelan mouthed “My boys” to them as she walked out of Knott Arena.

“He didn’t create many enemies. That’s really hard to do as you climb a mountain to 830 victories,” Jamion Christian remarked afterward. “The people that he coached against, the people that he played against always had such great love and respect for him.”