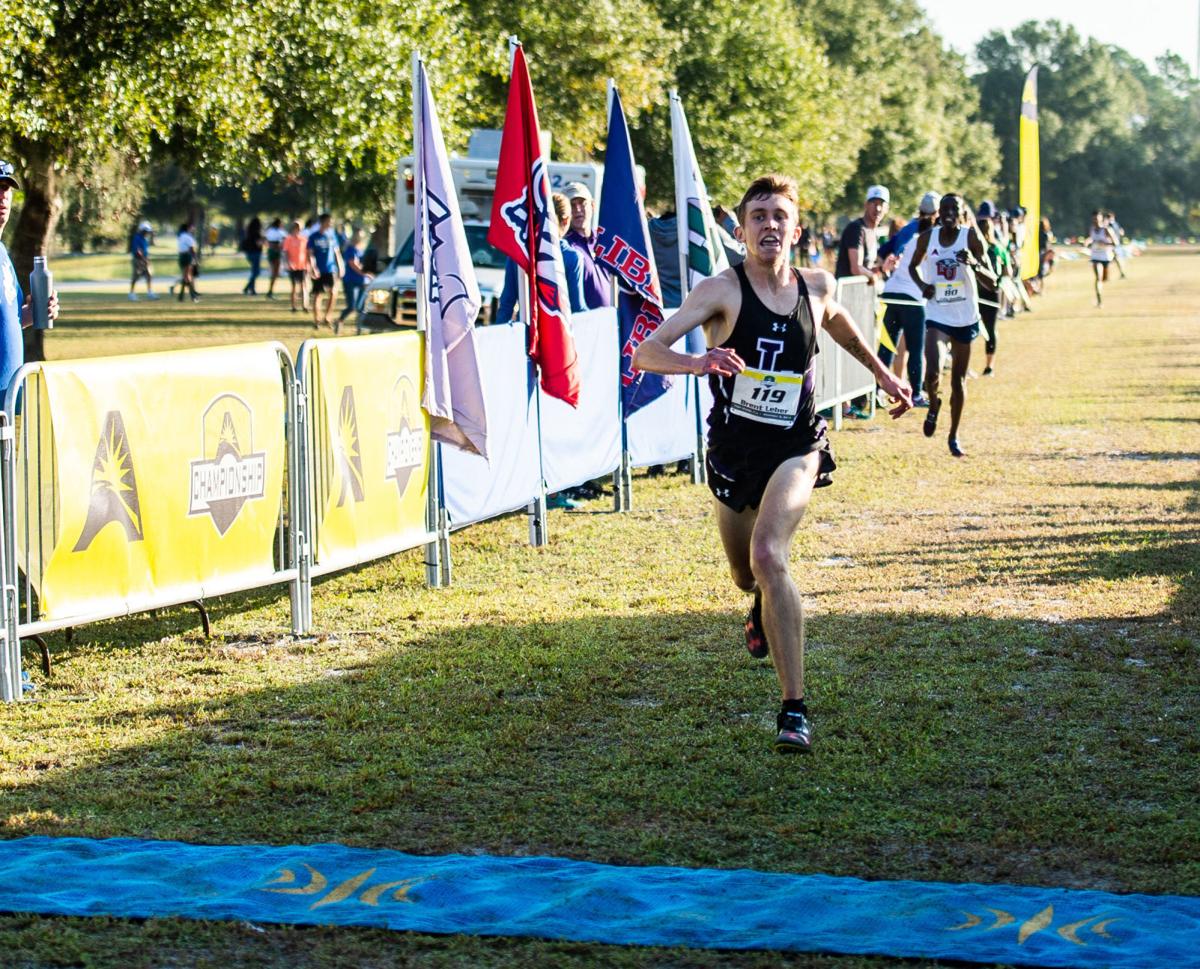 In May, Lipscomb University’s Brent Leber was named the Atlantic Sun Conference Male Student-Athlete of the Year. The award came on the heels of an astounding, completely unexpected comeback that saw Leber winning races and qualifying for NCAA cross-country nationals after an extreme layoff. 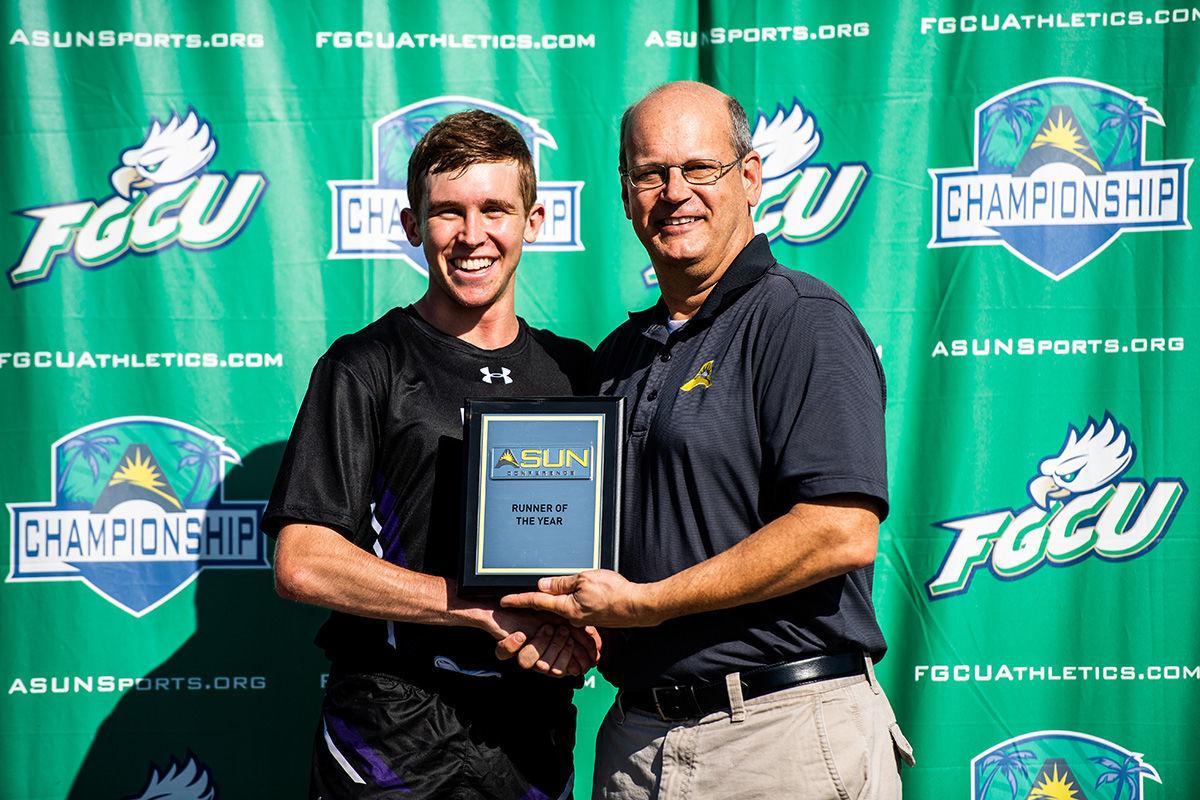 In May, Lipscomb University’s Brent Leber was named the Atlantic Sun Conference Male Student-Athlete of the Year. The award came on the heels of an astounding, completely unexpected comeback that saw Leber winning races and qualifying for NCAA cross-country nationals after an extreme layoff.

Two years ago, Brent Leber was a patient at the Mayo Clinic in Rochester, Minnesota. The Middletown High alum went there to solve a perplexing problem that had effectively, out of nowhere, halted his pursuits as a three-sport distance runner at Lipscomb University.

Through an initial battery of tests, though, doctors at the prominent medical center remained at a loss with Leber, who hadn’t grown since high school and had suddenly begun dealing with recurring stress fractures as a college sophomore.

Cancer was mentioned. A tumor, maybe.

Was his running career over? Beyond that, would his life ever be the same?

“Oh, jeez,” Leber said in a refrain he used often over the phone during the synopsis of his health tribulations.

All Leber knew by the ninth day of his Mayo experience was that he was being asked to sign papers acknowledging the risk of a dangerous three-hour test that could cause him to pass out or convulse but could very well yield a solution.

The test was a seamless success, and the answers that came have changed Leber’s life, definitely for the better.

Late this May, for instance, he answered his phone back at home in Myersville. It was Lipscomb athletic director Philip Hutcheson.

Leber, 23, had just been named the Atlantic Sun Conference Male Student-Athlete of the Year.

The award came on the heels of an astounding, completely unexpected comeback that saw Leber winning races and qualifying for NCAA cross-country nationals after an extreme layoff.

With two years worth of injury, frustration and unknowns mostly behind him, Leber entered the fall of 2019 feeling like a new man.

And that’s not too far from fact.

The medical issue that stymied Leber’s running career and threw his life into flux was caused by a malfunctioning pituitary gland in his brain.

“For one reason or another, it just stopped working,” Leber said. “It basically caused all these hormone imbalances.”

Up until his year-long bout of repetitive stress fractures, Leber hadn’t given much thought to why he changed much physically in his first two years of college. “I just thought I was a late-bloomer,” he said.

He scheduled the trip to Minnesota, though, after an endocrinologist couldn’t provide an explanation. Not to mention, Leber’s bloodwork showed red flags: His testosterone, growth hormone and cortisol levels were out of whack, while his bone density was low.

“That’s why I was trying to train and getting all those fractures,” he said. “One little gland in my brain caused all of that.”

The test that required his signature? It was a glucose tolerance test. The way his body responded helped lead doctors to a diagnosis.

“That whole test helped them figure out that I needed a growth-hormone treatment,” Leber said. “That was a huge turning point in the visit.”

Since the spring of 2018, Leber has injected himself in the abdomen two or three times a day. Within months of leaving Mayo, he grew two inches — along with never-before-seen facial hair.

He also began to train again — from “square one.” Accustomed to the rigorous regimen required of a Division I runner, the modest, painful gains were equally mentally and physically challenging.

“Instead of running 80 miles a week, you’re running like 10,” Leber said. “You’re just like, ‘Man, am I ever going to get back to where I was?’ There’s definitely a lot of doubts.

“There were days out there when I was like, ‘How am I going to run a 5-mile race in cross-country next fall when right now I’m running for 15 minutes a day and I’m breathing hard?’

So, instead of rushing back for the fall of 2018, he took the entire school year off from competition with a medical redshirt. He ramped back up to what he considered “serious” training the following spring.

By then, Lipscomb had a new coach. Nick Polk took over the Bisons running programs before the 2019 cross-country season. One of his first calls was to Leber.

He had a lot to explain.

“We spent at least an hour on the phone talking about all of his injuries and past problems,” Polk said.

But they agreed on a realistic goal for the season — that Leber might reach a point where he’d crack the top seven scoring runners.

It took one race for them to realize that might’ve been an underestimation.

On Sept. 14, Leber was excited to make his return at the season-opening Commodore Classic in Nashville. The night before the meet, his parents, Tim and Kathy, arrived and gifted Brent with a shirt emblazoned with the number 855 — a reminder of how many days it had been since his last race.

He placed sixth on the 8K course among 145 runners, some from big-time programs. The magnitude of what he’d done didn’t quite register until, Leber admitted, Polk pulled him aside and said, “Dude ...”

Polk proceeded to explain that he’d just beaten or run neck-and-neck with D-I All-Americans from the previous year.

“That day, he completely separated himself from everyone else on the team and never really looked back from there,” Polk said.

Still, they remained guarded while progressing through the season, hoping Leber was able to stay healthy to continue his resurgence. But once he won the conference championship, leading the Bisons to the team title on Nov. 1, Leber knew something special was happening.

Any time he competes now, Leber must have documentation that explains his need for hormone therapy, should he get pulled aside for a random drug test (which he said hasn’t happened since his return). After all, part of his treatment includes drugs that aren’t otherwise permitted by the NCAA.

“For me, it’s not considered a performance-enhancing drug, so I can take them,” he said. “But if I ever get tested by the NCAA, we have to have the paperwork on-hand.”

Throughout his comeback season, Leber said he never heard any trash-talk from skeptical opponents. But he was informed there was a thread about him on the website letsrun.com. Some of the comments questioned the legitimacy of his results.

Leber just laughed, knowing he’s cleared to use those drugs so he can “live a normal life.”

“Before, the way the doctors described it to me, my freshman and sophomore year of college, I was really running in a late-middle school or early-high schooler’s body against full-grown men,” said Leber, who is now 5-foot-8 and 128 pounds. “So, it’s like, how fair was that?”

Finally on a more level playing field, Leber surged. On Nov. 14 in Tallahassee, Florida, he finished seventh in the South Regional, completing the 10-kilometer course (six miles) in 30 minutes, 26.4 seconds.

He became the first runner in Lipscomb history to qualify for nationals.

On Nov. 22 in Terre Haute, Indiana, in horrendous rain and conditions that splattered mud into his eyes, mouth and hair, he finished 161st out of 252.

His success continued into the winter indoor track season, where he broke the school and ASUN records at 5,000 meters.

Add it all up (along with his nearly impeccable GPA during an academic year in which he graduated with a degree in exercise science), and it was an amazing tale — one worthy of a nomination for the conference’s top honor.

When Leber found out that, indeed, was the case, he was shocked and proud. Then, he considered who he was up against — many big-time athletes from higher-revenue sports around the ASUN.

Even though he’d put on 15 pounds since 2018, enjoyed a growth spurt and made Lipscomb history, he didn’t think he’d measure up. So he quickly forgot about the award.

“Eventually, I’ll have to find out who wins it,” he thought.

Then, his AD called with the news.

And two years after that scary, ultimately game-changing trip to Minnesota, Leber went into his parents’ backyard to record an acceptance speech. He thanked the “army” of people who helped him get back on track and gain consideration for the award.

“And then, I thanked God for giving me the faith to come back,” Leber said. “For a long time, I was uncertain I was going to run again. It was just a huge blessing.”

But his story didn’t end with that. Now a graduate student, Leber has four seasons of eligibility left at Lipscomb. On Monday, he flies back to the Mayo Clinic for a routine check-up.

Initially, he went there in 2018 wondering, partly, why he wasn’t growing. He goes back there having grown exponentially, in more ways than one.

Having run the mile in high school I understand how he must have felt. And I never had his med problems or running ability, .in spite of being my schools best miler for three years.