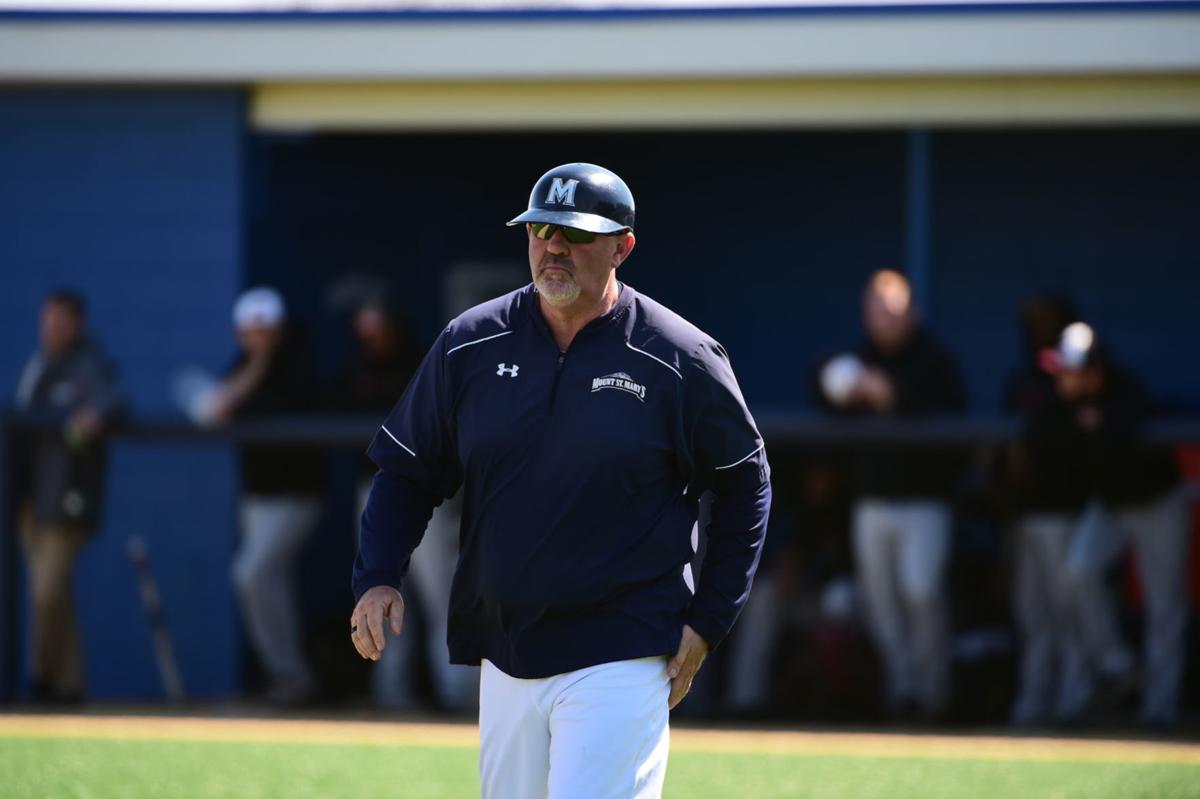 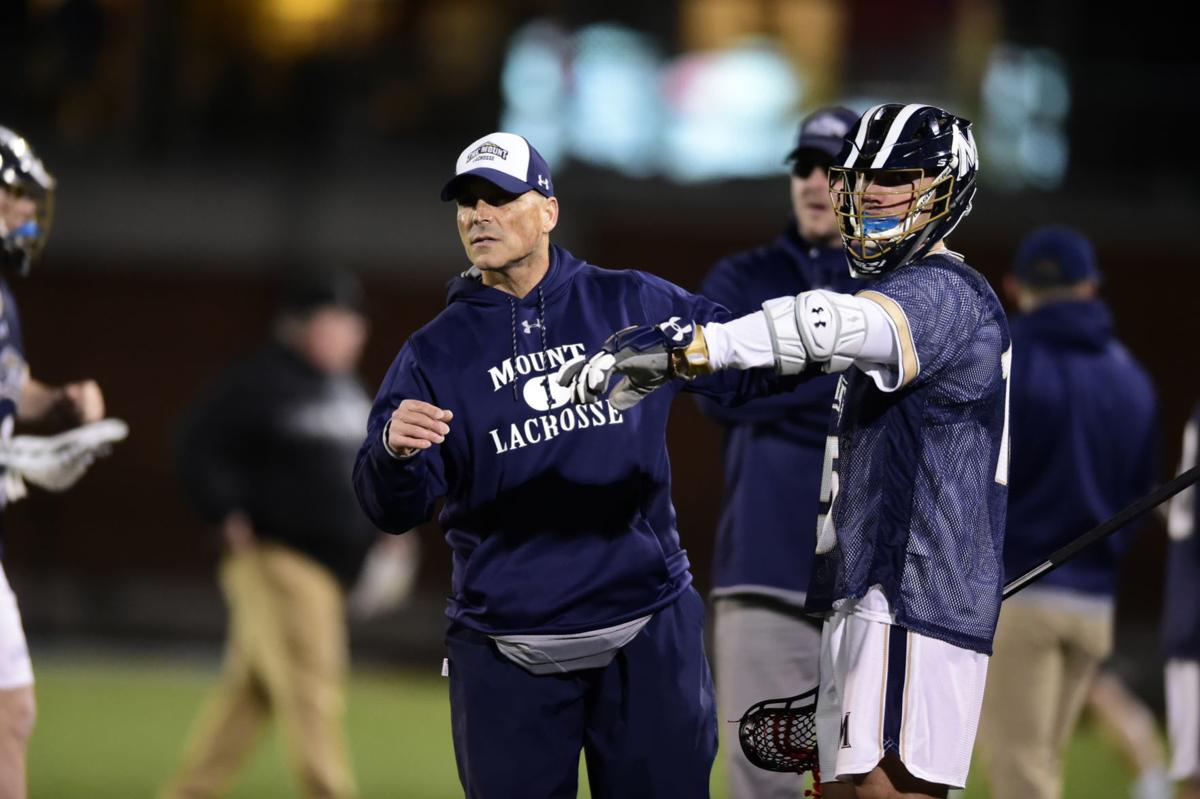 Mount St. Mary’s men’s lacrosse coach Tom Gravante, left, said his recruiting efforts have been focused on athletes who will be rising seniors this summer, as opposed to younger players. 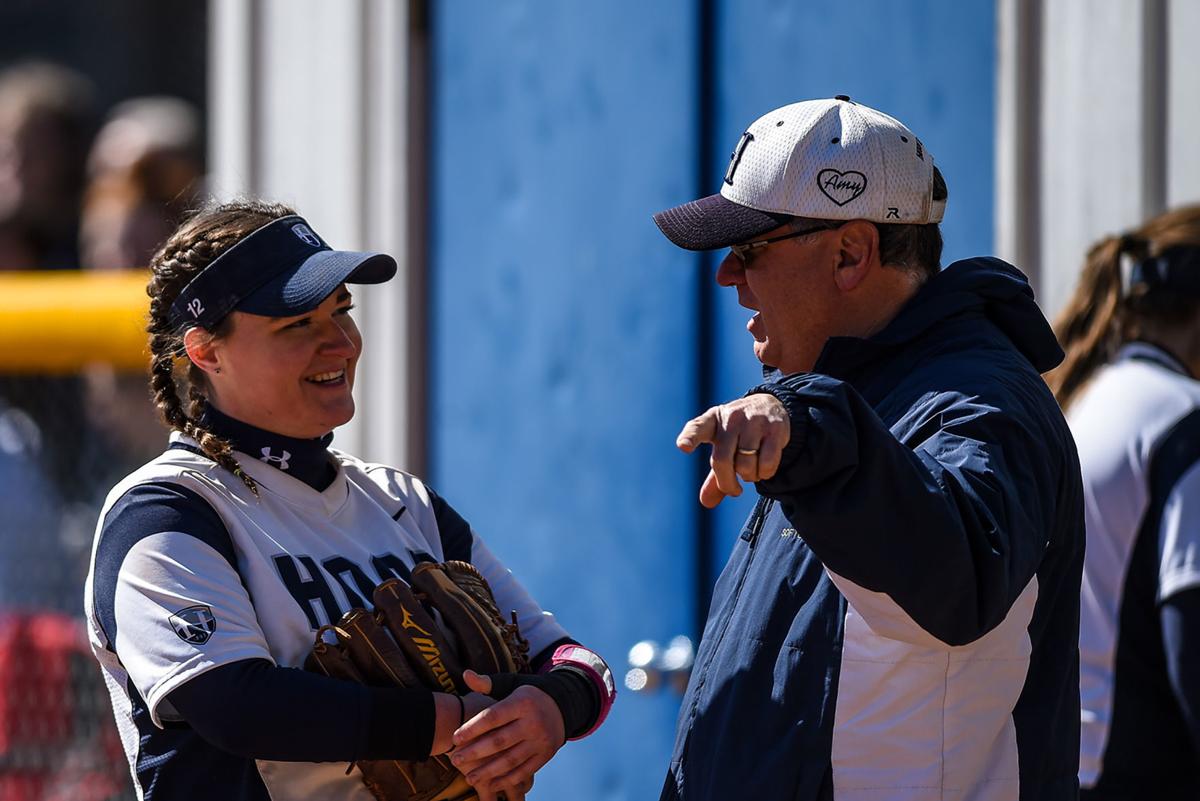 Hood softball coach Terry Burdette, right, already lost out on one of his recruiting stops — high school playoff games, where he can see how players perform when stakes are high.

Mount St. Mary’s men’s lacrosse coach Tom Gravante, left, said his recruiting efforts have been focused on athletes who will be rising seniors this summer, as opposed to younger players.

Hood softball coach Terry Burdette, right, already lost out on one of his recruiting stops — high school playoff games, where he can see how players perform when stakes are high.

When his team’s season was initially halted by the coronavirus pandemic, Mount St. Mary’s baseball coach Scott Thomson figured it would eventually resume.

That hope faded when he learned the NBA had shut down its season. And shortly after that foreboding news broke, the NCAA canceled all spring sports.

“And just like that, I had to contact everybody by phone, text message, email and just say, unfortunately, the season’s over,” he said. “It was crazy.”

As Thomson said, something new always pops up, even for longtime coaches like him who seemingly have seen it all.

But an abrupt end to his team’s 2020 season isn’t the only unprecedented situation Thomson had thrust on him by the health crisis.

Recruiting players figures to be considerably more challenging for Thomson. Not only did the health crisis shut down the high school baseball season before it began, robbing him of a chance to see prospects in action, but it threatens to limit the amount of offseason activities that showcase potential recruits.

Also, Division I coaches like Thomson could be affected by the NCAA’s decision to grant an extra year of eligibility to all student-athletes in spring sports whose seasons were canceled by the pandemic.

Do current seniors or underclassmen plan to stay for a fifth year? If so, how do programs — particularly ones from small colleges like Mount St. Mary’s — accommodate such wishes while adding freshmen over the next few years?

The pandemic-related shutdown of sports this spring will likely create ripple effects that will be felt for years to come by college athletic programs, and not just for spring teams or for Division I schools.

“Normally, we spend our spring kind of out on the recruiting trails, finding players at games and talking to players that have contacted us while we’re out on the road at games,” he said. “But obviously right now, that’s not happening, unfortunately.”

At least Putnam can see — even if it’s on film — radar-worthy prospects play as high school sophomores. Thomson has no such chance, creating a potential blind spot when trying to evaluate the skills of players from the class of 2022.

Showcase events in the summer and fall usually provide college coaches with chances to size up prospects. In fact, Thomson said several of them are held at Mount St. Mary’s facilities during the summer and fall. But it’s unclear if those — or any others throughout the country — will be held as planned at the Mount or anywhere else this year, thanks to the pandemic.

“Without that, once again, there’s no way of seeing ’22s and ’23s, and that’s where it’s really going to hurt us,” Thomson said. “Not just us, but just hurt Division I and Division II sports, looking down the road.”

Mount men’s lacrosse coach Tom Gravante said his recruiting efforts have been focused on athletes who will be rising seniors this summer, and he has insight into how such students have been affected by the pandemic.

“I have a son who’s a junior at Georgetown Prep. He didn’t get to take an SAT. He was scheduled to take it, and it was canceled,” he said. “Many young men have the same situation, so it’s going to delay it.

“But my approach at Mount St. Mary’s with my staff is, not to move forward quickly with these young men because it’s not fair to them,” he said. “I don’t believe in the early recruiting process.”

Mount coaches also must deal with changes created by the NCAA Division I Council’s eligibility extension for athletes who saw their spring seasons canceled.

The eligibility of all 2020 spring athletes, not just seniors, was extended. The Division I council allowed schools to expand their spring rosters beyond current scholarship limits and increased baseball’s 35-man roster limit, as long as the overage matched the amount of returning seniors.

Seniors who return to a baseball team won’t count against the program’s 11.7 scholarships. But it’s up to coaches to choose how much money returning seniors get, as long as the amount doesn’t exceed scholarship money they had in 2020. Then they’ll have to decide on current underclassmen who want a fifth year.

“It’s going to be up to us as coaches to kind of decide as these kids come through and it’s their senior year and they have one year left, do we grant them a fifth-year scholarship, are they going to want to stick around?” Thomson said.

Budgetary limitations will likely play a large role in such decisions.

“I know talking to a lot of other coaches, this is where a lot of us are upset — that we were just kind of hoping the NCAA would’ve just come out for Division I and said, ‘OK, this is what’s going to happen in the next four years.’ And then everybody abides by the same rules,” Thomson said. “And instead, it’s going to be up to each institution, and unfortunately, the rich are going to get richer and the poor are going to get poorer.”

Family finances of athletes will likely influence how many opt for an extra year of eligibility. Unlike football or basketball, Division I spring sports don’t typically award full scholarships.

And every athlete who decides to stay for a fifth year could mean less roster spots, less money or less playing time for incoming freshmen.

“It may also decrease the amount of 2021s and 2022s that teams will recruit,” said Gravante, speaking generally about men’s lacrosse. “And it’s sad. [I’m] not really sure how some of these programs are going to approach it.”

As for Gravante, he was just hoping to see rising seniors compete in events this summer. He said there are usually dead periods in July and August, but he thought the latter might have be lifted so coaches could evaluate prospects who missed the entire 2020 high school season.

Hood softball coach Terry Burdette already lost out on one of his recruiting stops — high school playoff games, where he can see how players perform when stakes are high.

Other evaluation opportunities for softball recruits are in flux. Burdette, who also coaches the 18U Gold Heartbreakers travel team, said one of the summer’s biggest recruiting events, held in Philadelphia, was moved to August.

“Certainly the kids that are going to be rising seniors, it hurts us with them,” he said during an interview last month. “This summer, travel ball tournaments usually start around Memorial Day weekend and go through early August. And right now, those are all up in limbo.”

These days, athletes can submit highlight reels to coaches and use technology to reach out to coaches. Last month, Burdette heard from some players.

“They’re sophomores in high school that have emailed me and they’ve called me,” he said. “I have the time to talk to them for a half an hour. So it’s given us more time to check in with our 2021 recruits and 2022s, but there aren’t many upsides.”

Great article on this issue for all coaches to deal with at this time. These are all great coaches who care about their student athletes and now have to deal with extra concerns. Good luck, if anybody can work this out - these coaches will.