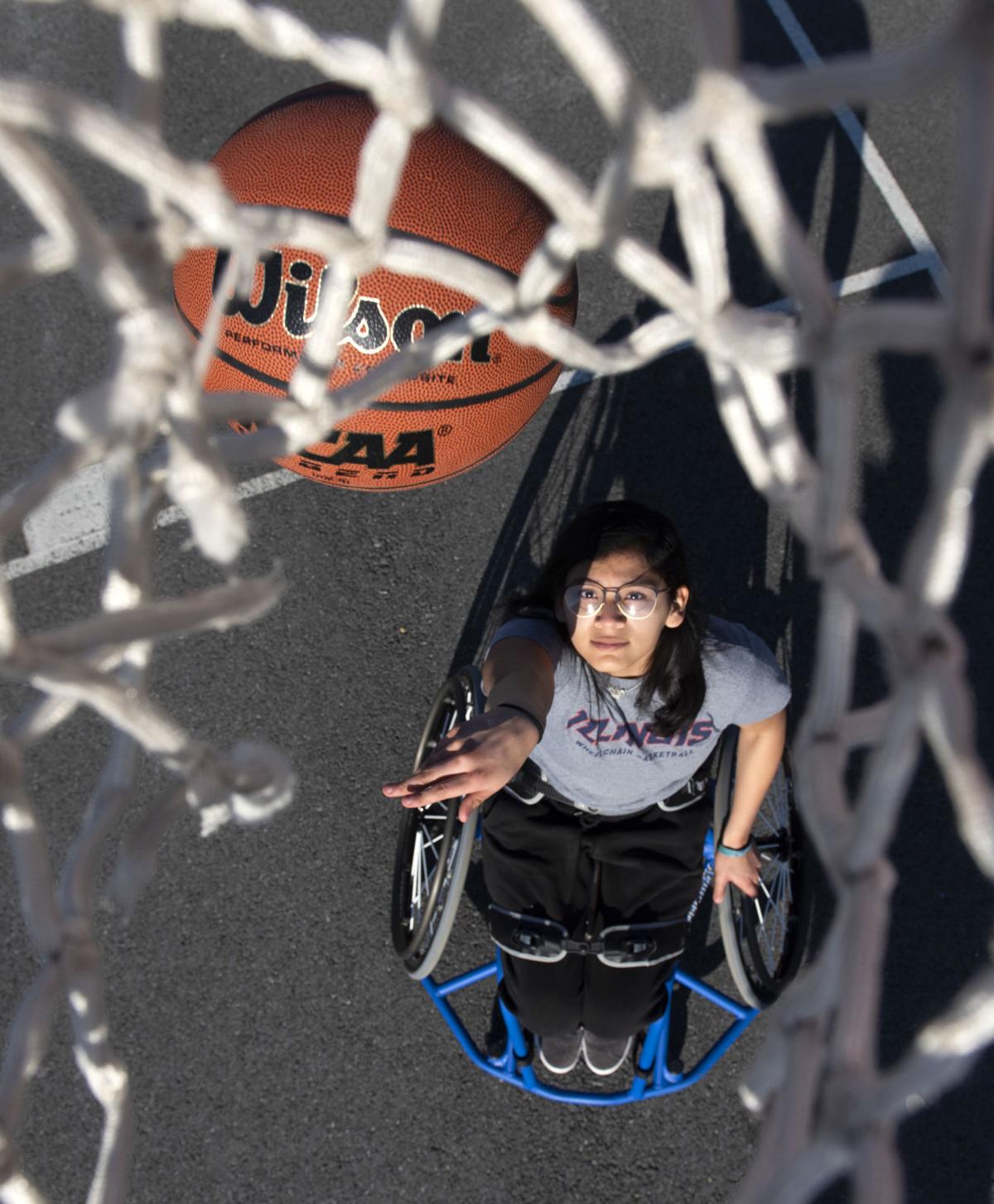 Urbana High School senior Hailey Smith, who will play wheelchair basketball for the University of Illinois, shoots on the court Thursday at Sugarloaf Elementary School. 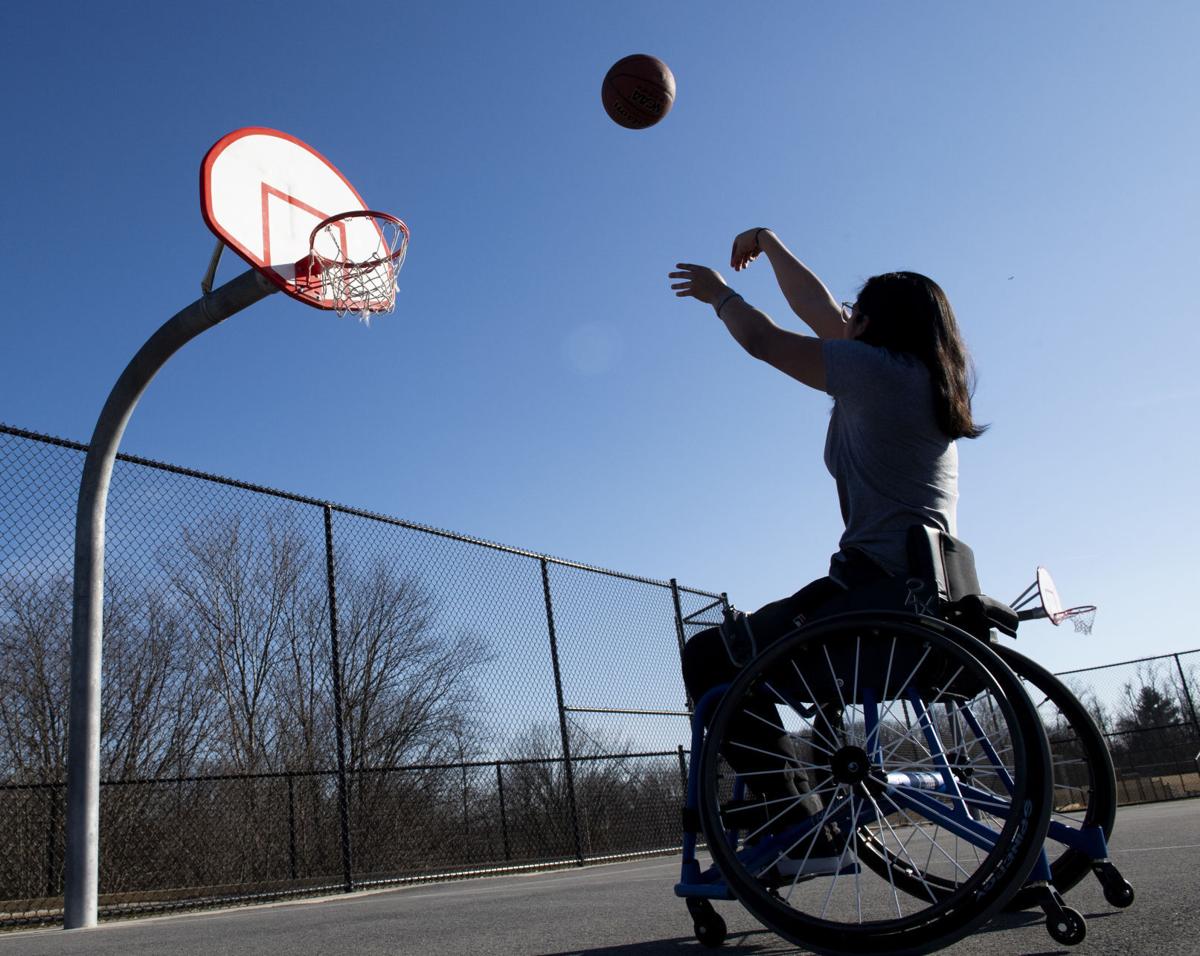 Urbana High School senior Hailey Smith, who will play wheelchair basketball for the University of Illinois, shoots on the court Thursday at Sugarloaf Elementary School.

“She contacted me one day over a text message and asked me, ‘Coach, would you like to see me walk at practice today?’” Husson said. “I’m like, ‘Yeah, absolutely.’”

Smith is paralyzed from the waist down after breaking the 10th thoracic vertebra (T10) in her spine on Nov. 15, 2019, when she fell off a rooftop balcony at a friend’s house.

But she remains a member of Urbana’s varsity softball team, which she joined as a freshman, and attended the Hawks’ workout sessions in the fall, when Frederick County Public Schools allowed spring sports teams to train.

And at one of those sessions, per her text message exchange with Husson, Smith got up from her wheelchair and, using leg braces and a walker, walked from the dugout toward Husson.

“With the assistance of one of the softball players, she was able to stand up and actually walked to me,” Husson said. “And then, if that wasn’t enough, she looked at me, she said, ‘Coach, would you like a hug?’

“And I tell you, I don’t get emotional too often,” he said. “But I’ve gotten more emotional with this kid over the past year or so than I think I’ve gotten with any of the players in the 20-plus years I’ve been coaching high school ball.”

Smith’s life has changed profoundly since her accident. She had to learn how to use a wheelchair and learn new ways to shower and dress, among countless other things.

But she handled those changes with unsurpassed positivity and refused to let paralysis prevent her from being the active, athletic person she’s been throughout her life.

Since her accident, Smith, 17, has tried horseback riding, sailing, sled hockey and wheelchair basketball. In fact, Smith got good enough at the latter to secure a spot on the University of Illinois women’s wheelchair basketball team, signing her national letter of intent in November.

“When I fell, I immediately knew that I was paralyzed from the waist down,” Smith said. “I didn’t really struggle with the fact that I was. I accepted it. And then really, for me, it was just like, ‘OK, what do I have to do now?’”

When asked about how her daughter handled the challenges of adapting after her accident, Heather Smith said, “She’s actually handled it quite well, amazingly for someone her age.”

Heather said those words on Jan. 7, which happened to be the one-year anniversary of the day Smith returned home for the first time after her accident. Heather said Hailey climbed over the balcony because she was walking on the ledge and she lost her footing.

“They had kind of one of those rooftop balconies, and she stepped over and slipped and she broke her back,” Heather said.

“Getting that call from the state trooper that she’s had a fall and they’re taking her to Shock Trauma,” said Heather, who then recalled questions that immediately flashed through her mind. “Where is that? Where do I go? And just the waiting, and trying to find out what’s going on, and that she was going to be OK.”

“It was a heartbreaking moment,” the coach said. “I had to close the door to my office and sit there and regain my composure because as a coach, you never want to hear of any injury to your team members.”

But Husson was struck by Hailey’s positivity when he visited her in rehab.

“Hailey actually lifted me up during that first visit,” he said. “And I walked out of the rehab hospital thinking about what a special young lady this is.”

Aside from breaking her T10 vertebrae, Smith had other injuries to deal with.

“It was really hard in the beginning because of all my broken bones, I was in a lot of pain, especially my shoulder blade,” Hailey said. “My left shoulder blade was broken, so it was just one arm, really.”

After two weeks at Shock Trauma, Smith went to the University of Maryland Rehabilitation and Orthopedic Institute in Baltimore, where she got physical therapy, occupational therapy and recreational therapy.

“I actually got to get up and do things,” she said. “I’ve never been the type of person to just sit around. I get too bored.”

Heather stayed with her daughter during the entire process.

“They showed her how to use a chair and take care of herself, get dressed and start from the beginning,” Heather said. “Because everything is different. You’ve got to watch for skin problems, and there’s different things when you have a spinal cord injury.”

Smith strived to master the wheelchair, including how to maneuver up and down on curbs.

Likewise, she eagerly soaked up whatever she could in recreational rehab, where she was introduced to adaptive sports like wheelchair basketball.

After therapy, Smith was directed to the Bennett Institute Physically Challenged Sports Program at the Kennedy Krieger Institute, where she could hone skills in adaptive sports.

Smith is a longtime athlete who also played varsity basketball as a freshman at Urbana before focusing solely on softball.

“I had to stay home to do school, which I didn’t like because I just wanted to see my friends again,” she said.

She finally went back to Urbana for classes in February, but it was a short-lived return. In March, all Frederick County Public Schools shut down because of the pandemic, and they haven’t opened since. Smith went back to being schooled at home, only this time, her classmates all did the same.

Smith was still a part of the 2020 Urbana softball team, which didn’t got to play because of the pandemic-related shutdown. On a Hawks team poster, she sits in her chair in the middle, flanked on each side by teammates. She said some teammates, including former ones, visited her while she was in therapy.

But after her accident, she now had new teammates as a player on the Bennett Blazers wheelchair basketball team. After learning basketball as a kid, playing one-on-one against her older brother, Hugh, Smith didn’t have much trouble picking up the wheelchair version.

Still, she had to get used to launching shots from her chair. Just as in running basketball, the hoop is 10-feet high, but wheelchair players are shooting from a different vantage point and must rely on upper body strength to shoot.

“It was definitely frustrating for me not being able to reach the basket at first because I’ve been playing my whole life, but that was when I just got out,” she said. “So I got stronger and I could reach the hoop again.

“It’s really just the same game, it’s just a matter of the wheelchair skills,” she said. “The only differences are how you screen and dribbling. Dribbling is a little different, but I got the hang of that pretty quickly.”

Players can wheel their chair and dribble simultaneously, according the International Wheelchair Basketball Federation’s website, IWBF.org. But if the ball is picked up and/or placed on the player’s lap, the player can only push their wheels twice before having to shoot, pass or dribble again (there is no double dribble rule in wheelchair basketball).

The sport also requires players to use a different type of chair, which has a lower seat and wheels that are angled outward.

While Smith enjoyed all the activities she took up after her accident, wheelchair basketball was one that helped determine her future path.

“Before this, I didn’t think I was going to play any sports in college or go to college at all, really,” Smith said. “And now I’m playing for a really good school.”

Illinois expressed serious interest, and Smith fell in love with the program and campus. There’s a been a pipeline of sorts that has sent plenty of Bennett Blazers wheelchair basketball players to Illinois’ program, which is a member of the National Wheelchair Basketball Association.

“And a lot of them actually end up going to the Paralympics, which is a huge deal,” Smith said. “That’s probably one of my future goals, hopefully, to be able to play in the Paralympics.”

Meanwhile, Smith is still a member of Urbana’s softball team, which hopes to play this spring if the pandemic-related shutdown of sports ends. She was a regular during the team’s four-week workout sessions in the fall, when Frederick County Public Schools spring teams got to hold skills sessions. Husson said Smith contributed by being a leader for the younger players in her pod, sharing her knowledge of the game.

It’s hard to imagine a more inspiring leader than Smith, whether you’re a young softball player or a longtime coach.

“I’m so proud of the way she has attacked the challenge that’s been laid down for her,” Husson said. “And I’m inspired by her positivity in not allowing this to hold her back.”