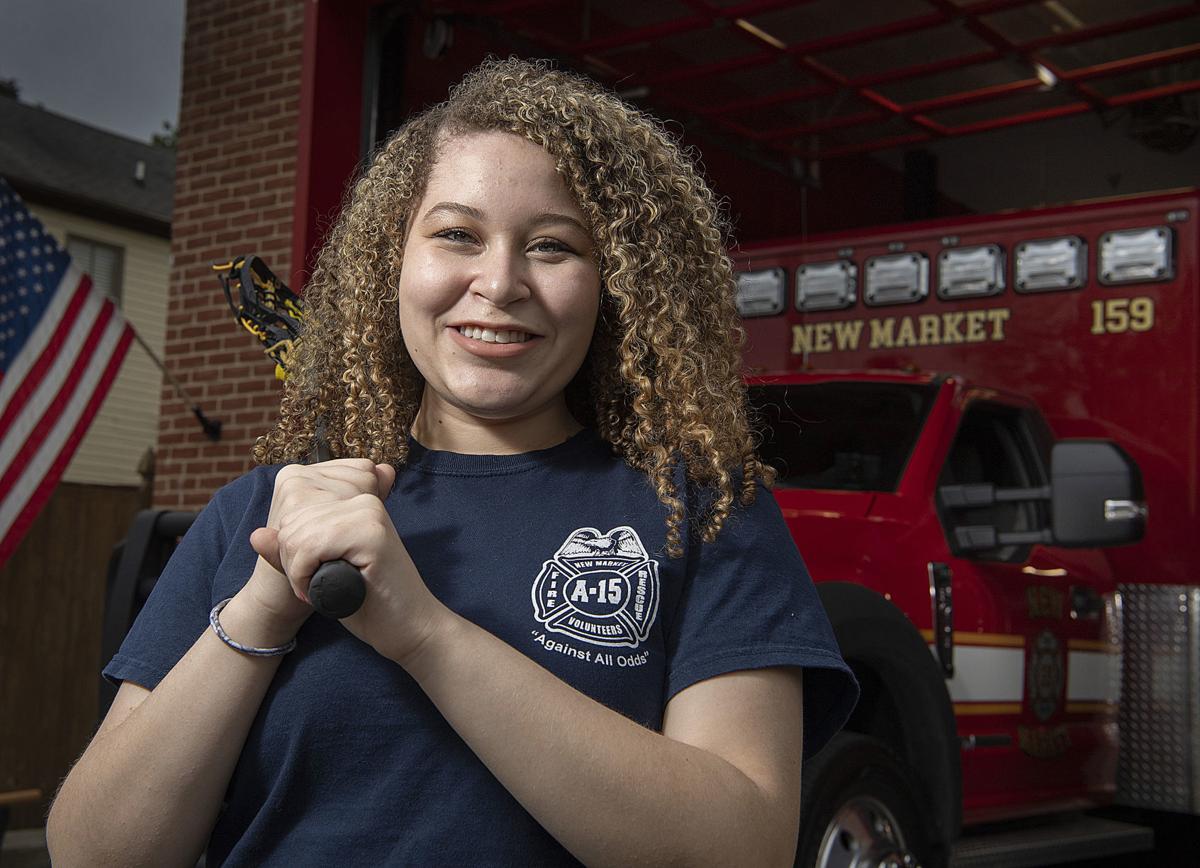 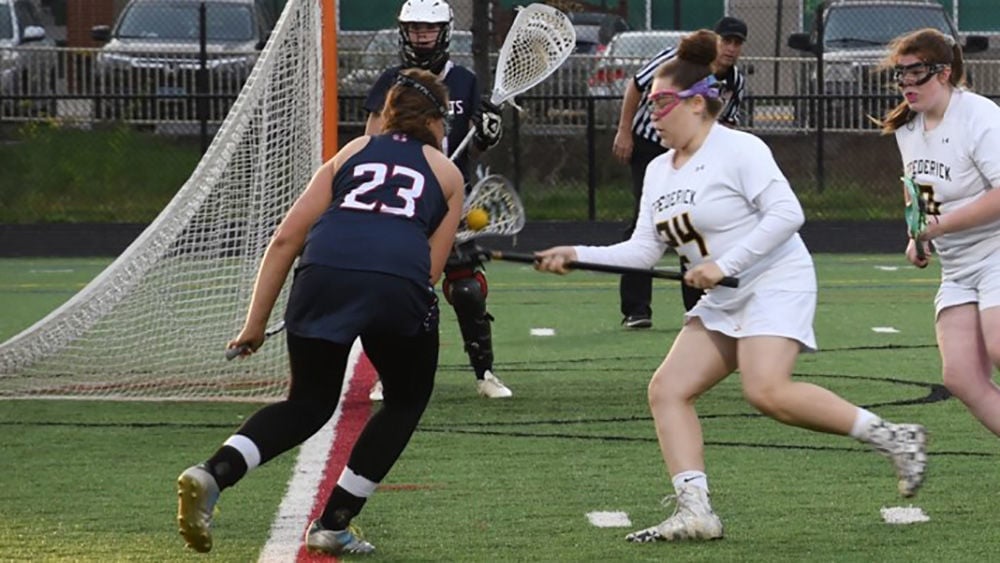 Frederick’s Daryenne Dorsey (24) was scheduled to start at attack in her senior year before the season was canceled.

Frederick’s Daryenne Dorsey (24) was scheduled to start at attack in her senior year before the season was canceled.

On April 20, Daryenne Dorsey’s iPhone calendar reminded her that, in a typical senior year, she would’ve been getting ready to take the field with her Frederick High girls lacrosse team against North Hagerstown.

Around that exact time on that day, though, she was at New Market District Volunteer Fire Department, working her assigned shift as a newly certified Emergency Medical Technician — a job she legitimately seemed preordained to perform.

It’s an overnight shift — from “1800 to 0600,” Dorsey says, like a true professional — that she’s been scheduled to work for the past few months.

Like all high school spring sports athletes around Maryland, Dorsey saw her final season of lacrosse taken away due to the coronavirus shutdown.

But during the health crisis, rather than dwelling on what she lost, she’s giving back by utilizing her medical training to help those in need — and that could include COVID-19 patients (though it hasn’t yet).

She’s not between the white lines of a lacrosse field. No, at just 17 years old, she’s on the frontline of the battle against a pandemic.

Dorsey became eligible to work calls in February, just weeks before the virus outbreak in America. She took the EMT class at the Frederick Public Safety Training Facility through the Maryland Fire and Rescue Institute earlier in her senior year.

“I was grateful enough that I was able to do the work-study program,” she said last week over the phone, “so I was able to have a flexible schedule that fit EMT class in and gave me time to ride [ambulances] at the stations.”

And just as she was completing that sentence, tones from a scanner divided her attention at her parents’ Frederick home: There was a call for a house fire.

So Dorsey said goodbye and was out the door with her father, Jerry, who is the volunteer deputy chief at Frederick’s United Steam Fire Engine Company No. 3.

This happens often in their home. If she’s not working a shift at one of the two fire departments where she’s a volunteer, Daryenne tags along with Jerry on fire calls in case there’s a need for an extra EMT.

And this is nothing new.

Long before she became certified, she was around the fire service. It was part of her life ever since she was a baby, according to Jerry.

“When I say baby, I mean baby,” said Jerry, who like his wife, Tammy, is also an EMT. “She was always there, always interested. She would always ask questions: ‘What’s that? Where are we going?’”

As a youngster, Daryenne could decipher scanner codes better than most adults.

“She was probably well-versed at the age of 10 as to what was going on, what the call types were,” said Jerry, who works full-time as the assistant fire chief at the Fort Detrick Fire Department.

Eventually, if Jerry was in charge of a fire call that his daughter accompanied him on, he’d give her little jobs to do, like filling out the command board with basic information regarding the incident.

Her first memory of a call with her father was a big house fire. To her 5-year-old eyes, with flames reflecting off them, it was “crazy.”

And also, she recalls, impressive.

“It’s a cool experience to see everyone doing their jobs together and seeing people who are volunteers and career [firefighters], working together to achieve the same goal,” she said.

As Dorsey got older, she wanted to get more involved. She’d be at the fire station, Jerry said, asking, “What can I do?”

At the time, there was no juniors program at United Steam, so Daryenne helped her father design one that he presented to the station’s board of directors in 2015. And so, the Junior Swampers were born.

Then, last October, she started riding along in the ambulance, completing the field internship for her EMT course.

Now that she’s certified, she can function as an official EMT on a three-person emergency crew with New Market and United Steam. Technically, she’s an aid-in-training, only because she’s not yet 18.

Just as Daryenne was getting used to her official role, though, the pandemic hit. With it came new policies for operation, updated guidelines — and a lot more personal protective equipment to keep track of and use.

Due to her being underage, Daryenne isn’t permitted to go on calls to help individuals who are prescreened through dispatch as potential COVID patients. But, she said, “we always have to think the worst,” to avoid exposure at all costs.

Once they arrive to help someone and assess the situation, EMTs can always upgrade the status depending on the individual’s presentation, meaning Dorsey could wind up treating a possible COVID-19 patient.

But, Jerry said, “She understands her do’s and don’ts.”

Daryenne said the stress level has been ratcheted up due to the pandemic and the additional safety measures. Putting on the extra PPE, for instance, takes time, which could lengthen their response to what is by definition an emergency.

“It’s definitely more nerve-wracking, too, because you want to go out and help the people,” she said, “but you have to take the time before the call to get dressed and protect yourself.”

It’s an extremely serious, stressful job for anyone, much less a teenager who might have otherwise been planning to celebrate all that comes with reaching the end of a high school career. That includes experiencing Senior Night and playoff games with her lacrosse team.

Daryenne, who plays attack at Frederick, was in line to be a starter for the first time this season. But she’d been a leader for awhile. Cadets coach Brandon Brewbaker said she’s always been selfless, helping to mentor younger players on and off the field.

Now, her off-field activities put her in an even more special class, particularly among her peers. Two years ago, Daryenne even took her teammates on a tour of the United Steam firehouse during the annual Frederick history week that Brewbaker plans for his players. She got to show off a facet of her life that has helped define the kind of person she is.

“To hear [that she’s] going out and putting on the PPEs and jumping into the middle of things, whether it be a car accident or a cardiac arrest or a COVID patient, from a 17-year-old?” Brewbaker said. “I don’t know, if I was 17, if I would’ve done that.

But that’s always been Dorsey, who will pursue nursing at Towson University. It’s native to her. It’s the way she was raised.

So, in early March, when sports teams were still practicing, Dorsey went to Brewbaker with a request: On Mondays, she needed to know if it would be acceptable to leave lacrosse practice so she could be at the New Market station in time for her EMT shift at 1800.

There was only one answer, really.

“How do you tell a kid, ‘No you can’t go save lives 10 minutes early?’” Brewbaker said with a little laugh. “That’s the kind of person she is.”

Finally a story about a deserving student not from Urbana, Linganore or Oakdale. Frederick is part of the Frederick County School system.