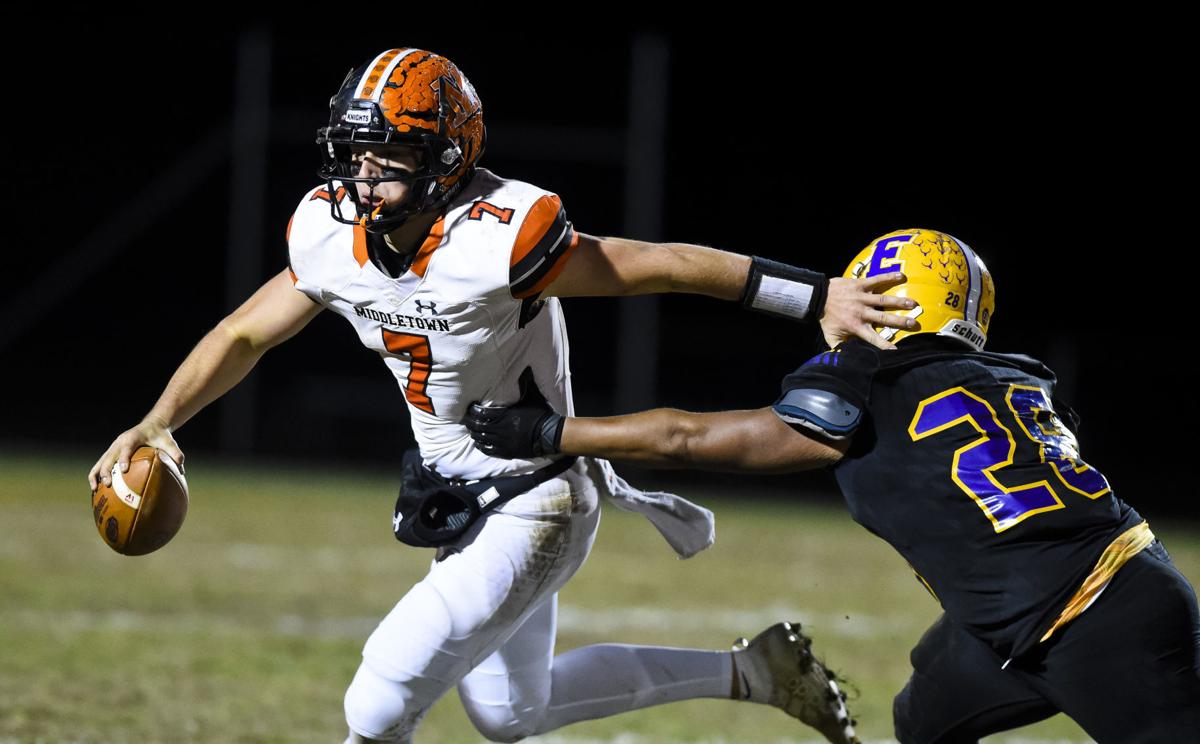 Middletown quarterback Reese Poffenbarger, left, led the Knights to the Class 2A state title last month. He threw for 2,943 yards and 32 touchdowns in the 2019 season. Both were records for a Frederick County public school player. 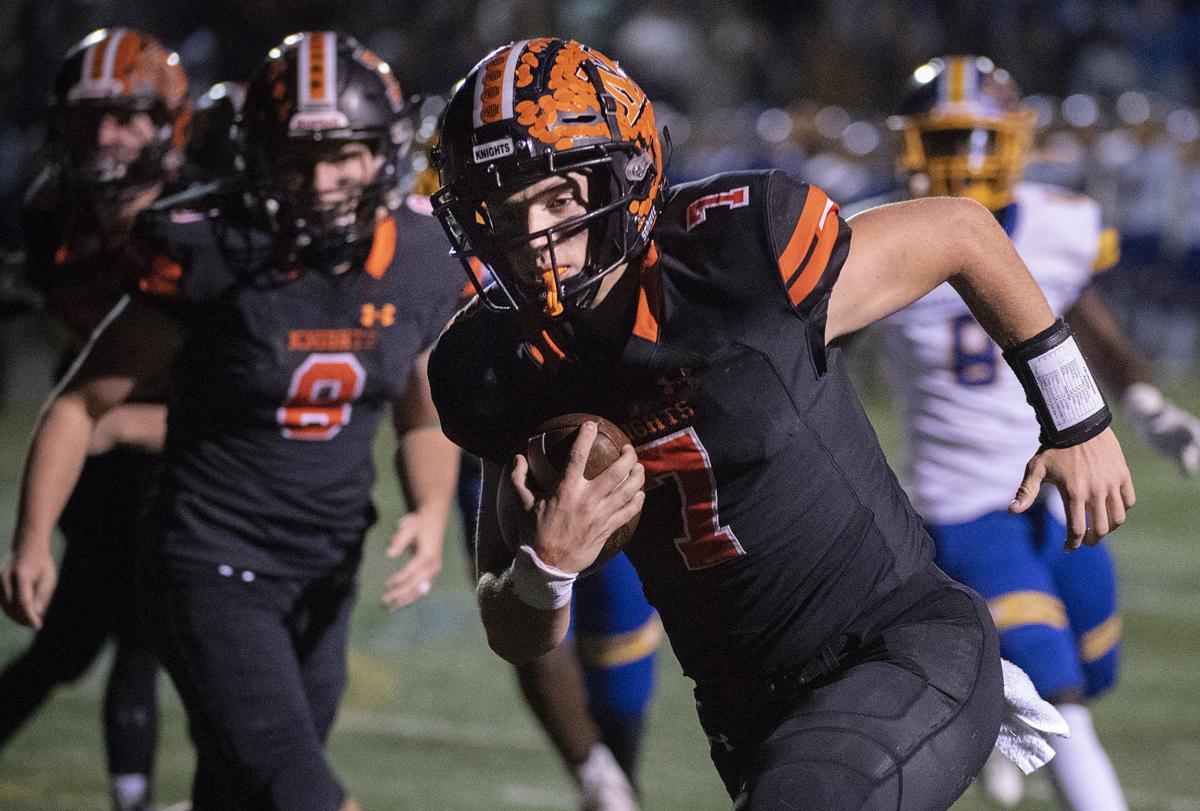 Middletown quarterback Reese Poffenbarger carries the ball into the end zone in overtime for what wound up being the winning touchdown Friday as the Knights defeated rival Walkersville in the Class 2A West playoffs at Middletown High. View and purchase sports photos at www.fnpinfocus.com.

Middletown quarterback Reese Poffenbarger, left, led the Knights to the Class 2A state title last month. He threw for 2,943 yards and 32 touchdowns in the 2019 season. Both were records for a Frederick County public school player.

Middletown quarterback Reese Poffenbarger carries the ball into the end zone in overtime for what wound up being the winning touchdown Friday as the Knights defeated rival Walkersville in the Class 2A West playoffs at Middletown High. View and purchase sports photos at www.fnpinfocus.com.

One long-held dream down had come true, but another one remained unfulfilled.

Poffenbarger had yet to commit for a scholarship to play college football, something he had set his sights on doing since his freshman year.

He did his best to block out thinking about this during his senior season, directing his focus on Middletown’s drive for a championship. But the recruiting clock was ticking.

“It definitely began towards the end to get kind of stressful,” he said. “By the early signing period [which ended Dec. 20], I still really didn’t have a school that I thought I would want to go to.”

Such a school entered the mix shortly after the Class 2A state title game. Old Dominion University — a Division I Football Bowl Subdivision program with newly hired coaches who had shown interest in Poffenbarger when they were at Penn State — offered the Middletown senior a full ride.

Poffenbarger verbally committed to Old Dominion on Tuesday, finally landing the full scholarship he’d been dreaming about for years.

“It’s definitely a huge thing off my shoulders,” he said. “I can just focus on one coaching staff, building my relationship with those guys and then trying to get some other good players to go to ODU.

“I can finally lock in on myself and training and focus on winning games in basketball,” Poffenbarger said on Thursday, shortly after helping the Knights win a hoops game over Boonsboro.

Poffenbarger skipped his junior season in basketball so he could work on improving in football, and the results were plain to see this fall. In his senior season, Poffenbarger passed for 2,943 yards along with 32 touchdowns, which were both Frederick County Public High School records.

Still, Poffenbarger wasn’t flooded with Division I scholarship offers heading into the Class 2A state championship game against Potomac. The only one he had at the time, in fact, came from Virginia Military Institute.

If his stock needed bolstering, it was accomplished in the title game, when he passed for 318 yards and four touchdowns to lead the Knights to a 35-14 win at Navy-Marine Corps Memorial Stadium.

Knights coach Collin Delauter thought Poffenbarger’s performance that night made him all-the-more coveted by college programs. Granted, other schools had shown interest in Poffenbarger before his senior season.

“It just seemed like every time it came down to an offer, they just picked somebody else for some reason, whatever that was,” Delauter said. “And after the season, I think he left no doubt that he was the right guy for it.”

So did Old Dominion, a Norfolk, Virginia, school that hired Penn State offensive coordinator Ricky Rahne as its head coach two days after Middletown’s win in the 2A final. And Rahne brought other coaches from Penn State with him to the Monarchs.

Poffenbarger had made a good impression on some of those former Penn State coaches in the past, including at a camp when he was a sophomore.

“They really liked me,” Poffenbarger said. “And then when their staff left, they offered me immediately at Old Dominion.”

Poffenbarger has yet to visit ODU, but he heard glowing reviews about the school from Connor Myers, a former standout Middletown baseball player who played for the Monarchs before getting drafted by the Chicago Cubs.

“He played four years at Old Dominion, and I talked to him a lot about it,” he said. “He said that he loved it and if he could do it all over again, he’d do it a hundred times over. So, he really helped me with it.”

Years ago, the idea of a Middletown quarterback playing Division I football seemed somewhat far-fetched. Sure, the Knights had some fine signal callers, but they played for a program known for its ground-and-pound attack.

But after Poffenbarger began starting for them as a sophomore, the Knights gradually transformed into a pass-first team. Poffenbarger’s strides as a quarterback, aided by quarterbacks coach Chris Baucia, Delauter and Knights offensive coordinator Mike Pritts, made him especially dangerous by his senior year.

“He studies the game,” Delauter said. “He knows the game so well that during school, he asks me certain things about defenses and he’s trying to figure out in his head how to pick apart a defense the best way.”

Working with strength coach Pat Reeves, Poffenbarger also shook the undersized tag that might’ve made college programs shy away. Weighing 140 pounds during his sophomore season, Poffenbarger was a solid 6-foot-1, 205-pounder by his senior year, size that helped him evade sack-hungry defensive tackles to extend plays.

His ability to mature mentally loomed just as large. During the offseason before his senior year, Poffenbarger was a ringleader for early-morning practice sessions with other Middletown football players, who longed to get better so they could win a state crown.

“If you look at Reese in his sophomore and freshman year and you just kind of take snapshots of how he’s matured and he’s become a great leader and great football player and a great young man through the years, it’s special to be a part of,” Delauter said.

Great and congratulations, Reese. I just wish ODU was closer, so that we could come and watch.

You’ve played various positions in your basketball career, including post player, shooting guard and point guard. Do you like that?

Doug Williams and Paul DuMars, two coaches who were together every step of the way during a 29-year tenure as football coaches at Catoctin, are the guests on the Final Score podcast this week in light of Williams’ announcement last weekend that he was retiring as the Cougars’ varsity head coach.

As the season reaches the halfway point, boys basketball coaches Kyle McFadden of the Frederick Force and Brian Burdette of Catoctin High School are the guests this week on The Final Score podcast.

Linganore wrestling coach Ben Arneson, plus a look at the basketball landscape

Heading into the heart of the winter sports schedule following the holidays, Linganore wrestling coach Ben Arneson is the guest on this week’s episode of The Final Score podcast.