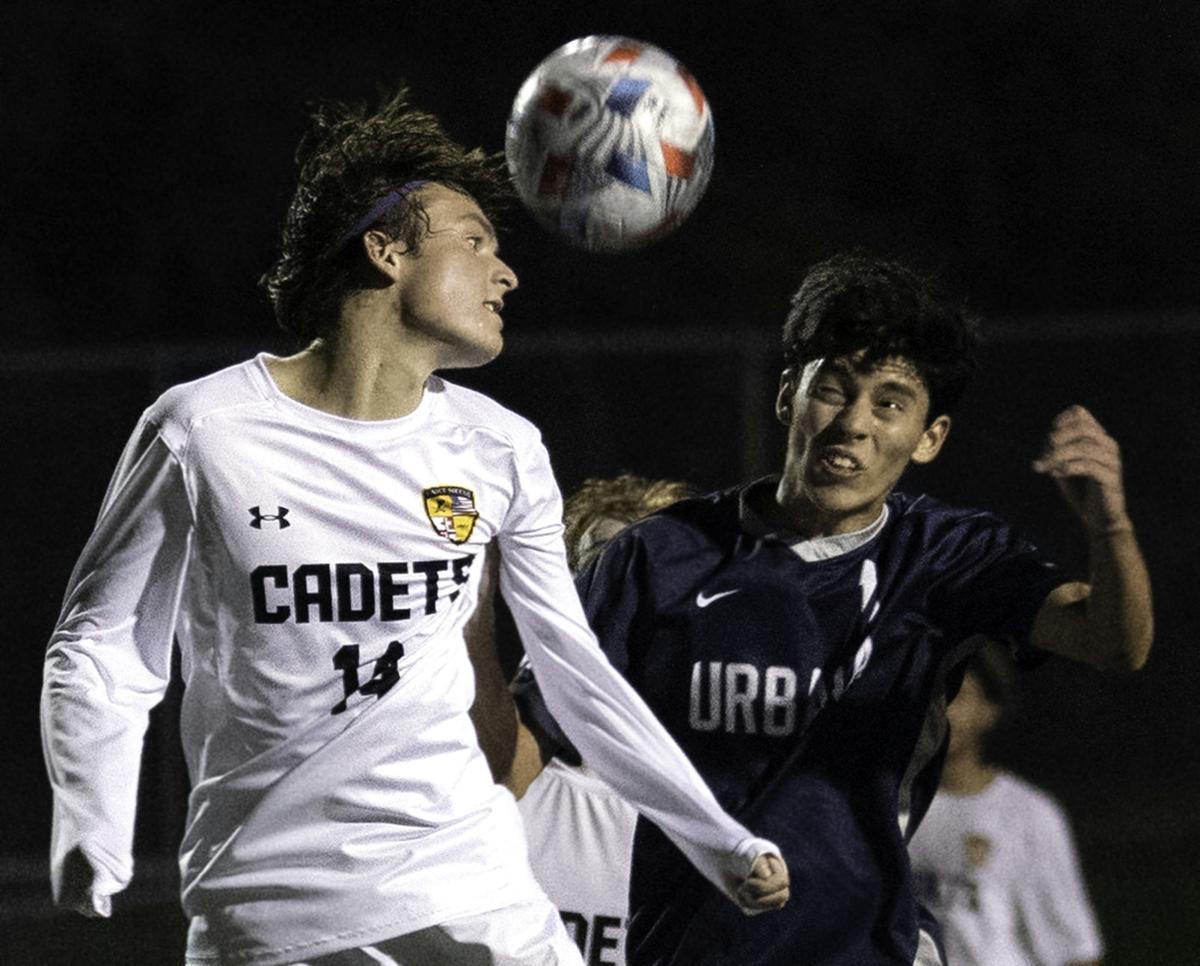 Frederick’s Caleb Lindell (14) heads the ball Monday night in the first half at Urbana High School. Defending for Urbana is Adam Saidi (11). 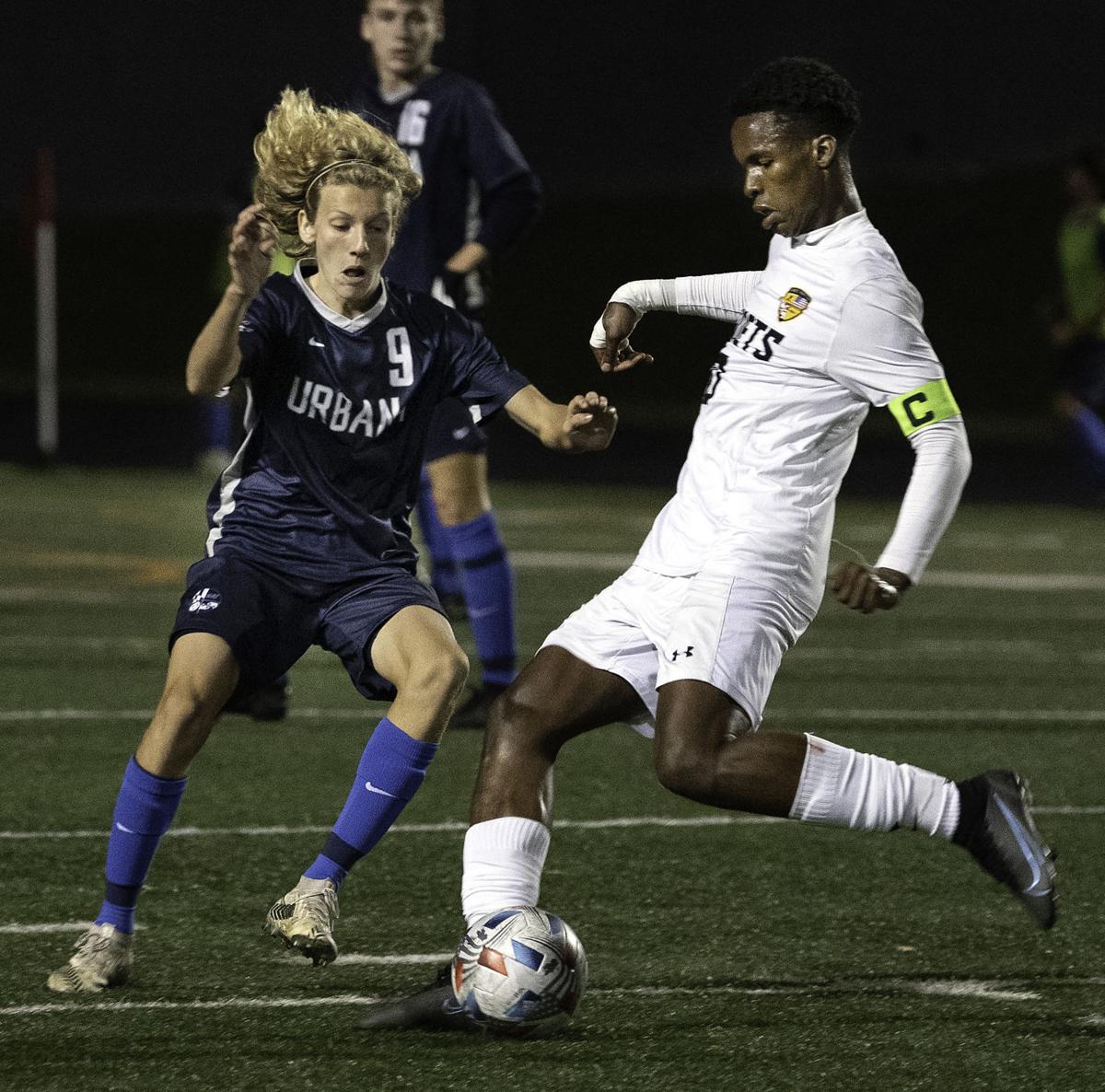 ABOVE: Frederick’s Jahiem Jamieson, right, prepares to kick the ball as Urbana’s Brady Roberton defends Monday in the first half soccer at Urbana High School. BELOW: Frederick’s Caleb Lindell (14) heads the ball in front of Urbana’s Adam Saidi.

Frederick’s Caleb Lindell (14) heads the ball Monday night in the first half at Urbana High School. Defending for Urbana is Adam Saidi (11).

ABOVE: Frederick’s Jahiem Jamieson, right, prepares to kick the ball as Urbana’s Brady Roberton defends Monday in the first half soccer at Urbana High School. BELOW: Frederick’s Caleb Lindell (14) heads the ball in front of Urbana’s Adam Saidi.

URBANA — With the playoffs and must-win games approaching in a few weeks, Urbana’s boys soccer team will certainly be battle-tested.

The Hawks played their fourth overtime game of the season Monday night before settling for a 1-1 tie with Frederick High.

“There’s a lot to be said for having to play 100 minutes. But, you know, we are building that character,” Urbana coach Scott Schartner said.

In their three previous overtime games, the Hawks (5-2-3) earned a win over Middletown and lost to Oakdale and Tuscarora. Three of their last four games have gone into an extra session, including a 2-1 home loss to the Titans last Tuesday.

“There’s a lot of teams that go into the postseason with only playing, maybe, only one overtime game,” Schartner said. “So, it’s going to be kind of familiar territory for us.”

Frederick High (8-2-1), meanwhile, played its second overtime game of the season. The Cadets previously pulled out a 3-2 home win over Linganore on Sept. 30 on a goal by junior Hugo Merry.

On this occasion, the extra session was made possible when standout senior midfielder Jahiem Jamieson turned and fired a shot into the net just over five minutes into the second half to pull Frederick even with Urbana.

“I already knew what was around me. So, I just turned and placed [the shot],” Jamieson said.

The Cadets turned the game in their favor and dominated possession in the second half after Urbana controlled the run of play in the first half.

Junior midfielder Parks Tolton gave the Hawks a 1-0 lead with just under 10 minutes to play in the first off an assist from senior striker Jedidiah Hart.

Frederick was able to more effectively play the ball into space in the second half and, as a result, generated some more scoring chances.

But neither team could find the finishing touch.

Urbana had a great chance in the final two minutes of the first 10-minute overtime session. But sophomore midfielder Dylan Savage could not quite get his foot on it to tap it in at the far post.

“This is a step in the right direction,” Schartner said. “I really like the opportunities we generated in last 20 minutes. I’m pleased with the effort and performance, especially after Frederick really dominated play in the second half.”

Heading into the first state football semifinal between Frederick County football teams in more than 20 years, Linganore coach Rick Conner is this week’s guest on the Final Score podcast.

With his team set to play in the Class 1A state championship game, Brunswick boys soccer coach Shawn Baker is the guest this week on the Final Score podcast.

With her team set to play in a state semifinal Saturday, Oakdale High girls soccer coach Annie Schwarzenberg is this week’s guest on the Final Score podcast.