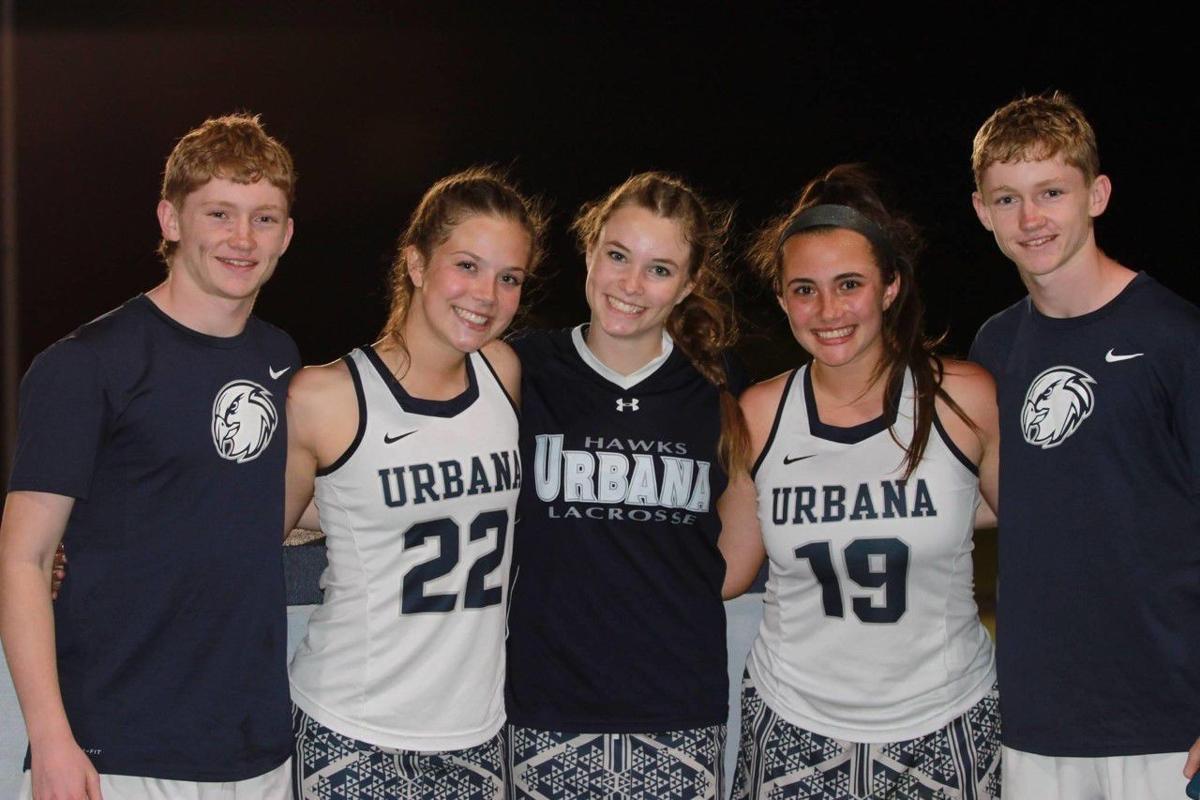 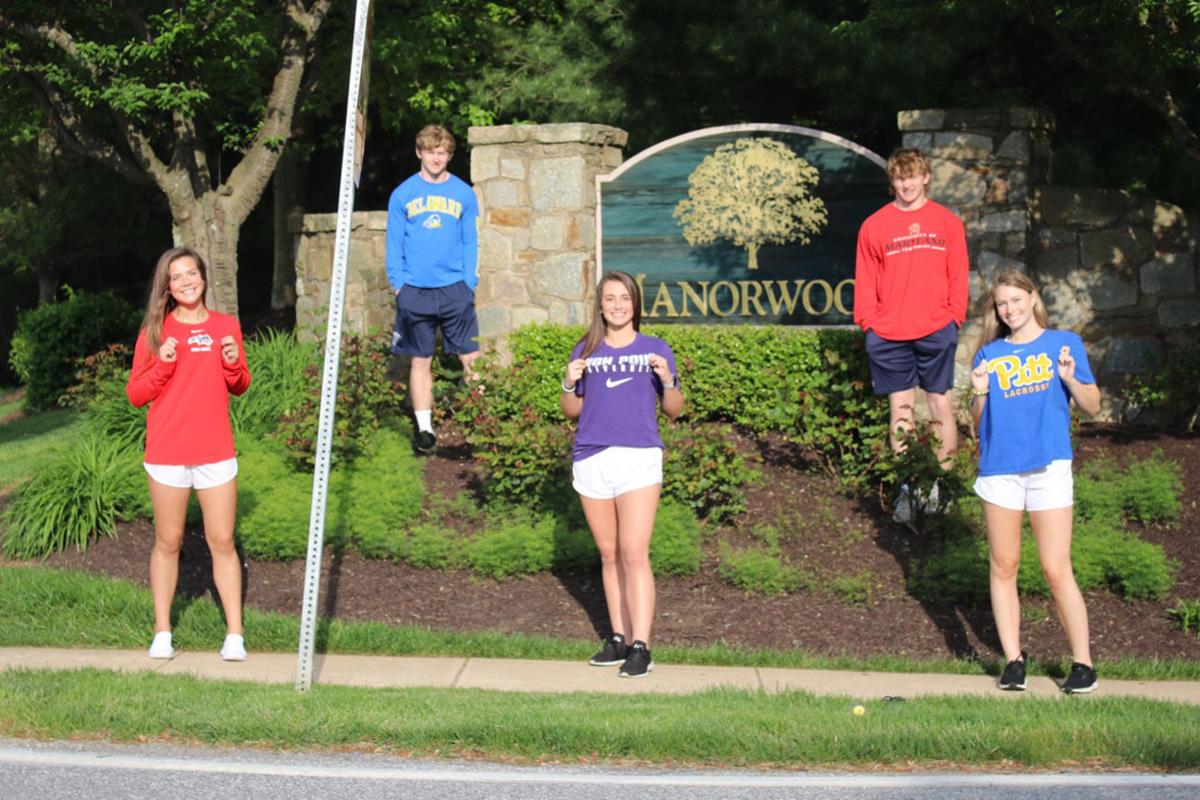 Aside from school spirit, they like to support two of that team’s stars, twins Jason and Eric Kolar.

“We are always screaming on the sidelines for Eric and Jason,” Voorhees said. “It’s the worst when someone pushes one of them. Then we get really protective. We’re like, ‘Don’t push them.’”

It’s a neighborhood watch, of sorts.

Voorhees, Hines, Coleman and both Kolars all grew up together in Manorwood, a small development off Penn Shop Road. They’ve been friends with each other most of their lives, forming bonds by the time they were first-graders and remaining close as current high school juniors.

Living near each other provided proximity, a prerequisite for friendship. But a common interest helped keep them close for the long haul — all five were dedicated lacrosse players.

Over the years, they’ve thrown the ball around together, gone on group runs and watched each other develop into stick-wielding standouts. And when they go their separate ways after graduating from Urbana in 2021, one more commonality will help bond them — all will play lacrosse at the Division I level.

So, Division I programs from five different states will have Manorwood products on their rosters.

“I think it’s really exciting that we all were able to do that,” Eric Kolar said. “And the fact that we all grew up getting to know each other — it’s cool and exciting to see what’s going to happen at the next level for all of us.”

Hines figured she was about 6 years old when she moved into the neighborhood. She was the new kid. The Kolars, Coleman and Voorhees all knew each other.

“We’ve just been like brothers and sisters since,” Hines said.

“I’ve lived in this neighborhood ever since I was born,” Voorhees said. “But when Avery came, that’s when we all became really close.”

By then, the Kolars were already playing lacrosse. A few of their female neighbors were also gravitating toward the sport.

Voorhees had older sisters who had played the sport, piquing her interest. And when Hines’ father, Ryan, started a youth lacrosse program, she joined up.

“That’s where I started,” she said. “And I’ve played with Avery ever since.”

A couple years later, Coleman became a teammate, prodded to try the sport by Gabby Averill, who she played basketball with.

“I figured, why not?” Coleman said. “I joined on the team with Avery and Natalie, and we just kind of stuck together since.”

Living near athletes who were committed to the same sport proved helpful. They understood each other and were able to help each other.

“We’d all have club practices and stuff coming up, tryouts and stuff,” Eric Kolar said. “So we’d always practice in our yards before the club tryouts, like third, fourth and fifth grade.”

After arriving at Urbana, it didn’t take long for any of them to start making names for themselves on the lacrosse field.

As freshmen, the Kolars were impact players, not surprising considering their lineage — they had uncles who played lacrosse at juggernaut Johns Hopkins and University of Massachusetts.

Eric was a midfielder, and Jason was an attackman. Both earned Frederick News-Post All-County first-team honors as freshmen, a feat they would accomplish again as sophomores.

They possess the kind of ability that can wow strangers or those who have known them for most of their lives.

“Any [game] we can go to, we always just want to go watch them because they’re the stars,” Hines said. “I love watching them play. They’re so amazing.”

Like the Kolars, Hines, Voorhees and Coleman began contributing on the lacrosse field as freshmen.

That year, Coleman earned Frederick News-Post All-County second-team honors. Hines and Voorhees each scored a goal in a win over rival Linganore, a sign of their ability to adjust right away to the varsity game.

As sophomores, Hines and Voorhees were second-team midfielders, and Coleman (a back) was an honorable mention.

The three players pushed each other to improve over the years. As Hines said, she isn’t jealous of the other two, just inspired.

“Although they’re the same age as me, I’ve looked up to them so much,” Hines said.

All five Manorwood residents seemed poised for big junior seasons this year, but they never got a chance to find out because the coronavirus pandemic canceled the entire spring sports season.

Each one has strived to stay in shape since the shutdown, which closed schools. Being juniors, they at least can look forward to enjoying their senior seasons. That, along with plenty of spare time, is all Coleman has needed.

“I have all the time in the day to work out, there are no excuses not to do it,” Coleman said. “So it kind of makes me more accountable.”

Voorhees was looking forward to being teammates for the first time with her sister, Kellie, a freshman on Urbana’s varsity team. Instead, those two spent plenty of time going on runs together.

“We went a lot of different routes around our neighborhood that we didn’t even know were there,” Voorhees said.

Just as it had for numerous college lacrosse programs on the prowl for prospects, her neighborhood yielded a nice discovery.

What a sweet story, and wonderful achievement for all five student-athletes. Good luck to all in your college careers, on and off the field.