CHESTERTOWN — Thanks to penalty cards, Urbana’s field hockey team was briefly forced to play at a four-player disadvantage during Saturday’s state championship game against juggernaut Westminster.

The defense that served the Hawks so well all season didn’t flinch, refusing the yield a goal during that stretch in the first half. And early in the second half, the Hawks took the lead on Maggie Goodwin’s penalty stroke.

Urbana looked fully capable of capturing the first state crown in program history and the first by any Frederick County team in 26 years. That made the final result even harder to take.

After sending the game into overtime, Westminster got the game-winning goal from Miranda Moshang with 7 minutes, 49 seconds left in the extra period to hand the Hawks a 2-1 loss in the Class 3A state championship game at Washington College.

So ended the most successful season in Urbana’s 25-year field hockey history, one that saw it reach the state final for the first time and harbor realistic hopes of toppling the Owls, who have now won 10 state crowns.

“It’s hard. I think we left our hearts out there,” Urbana junior goalie McKenna Ladson said. “And I think next year we’re going to try our best to get back out here.” 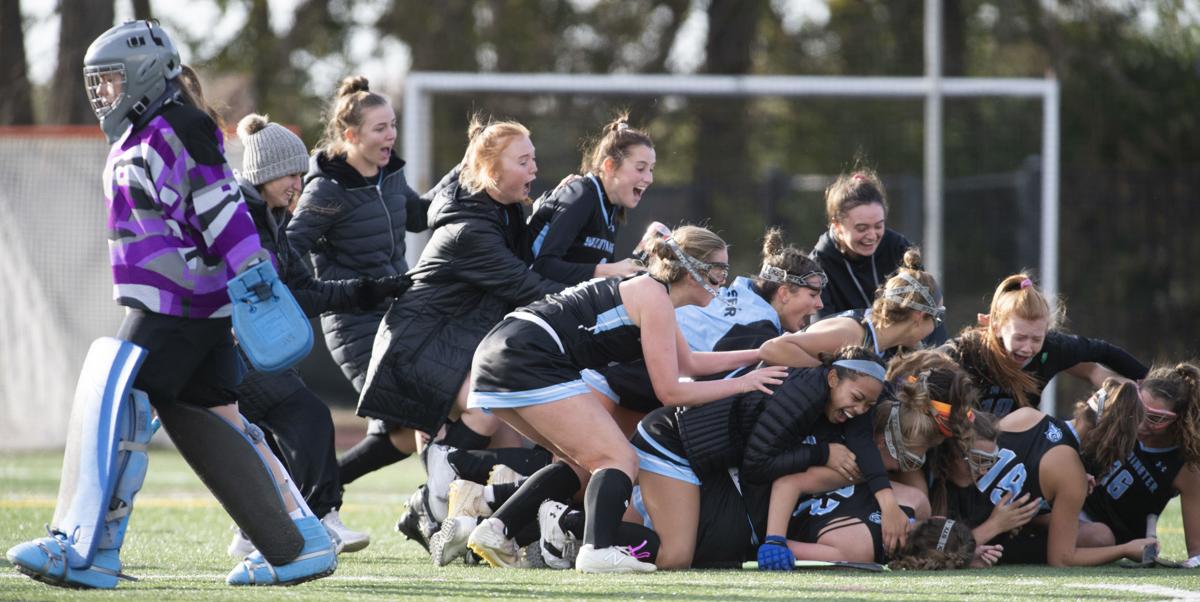 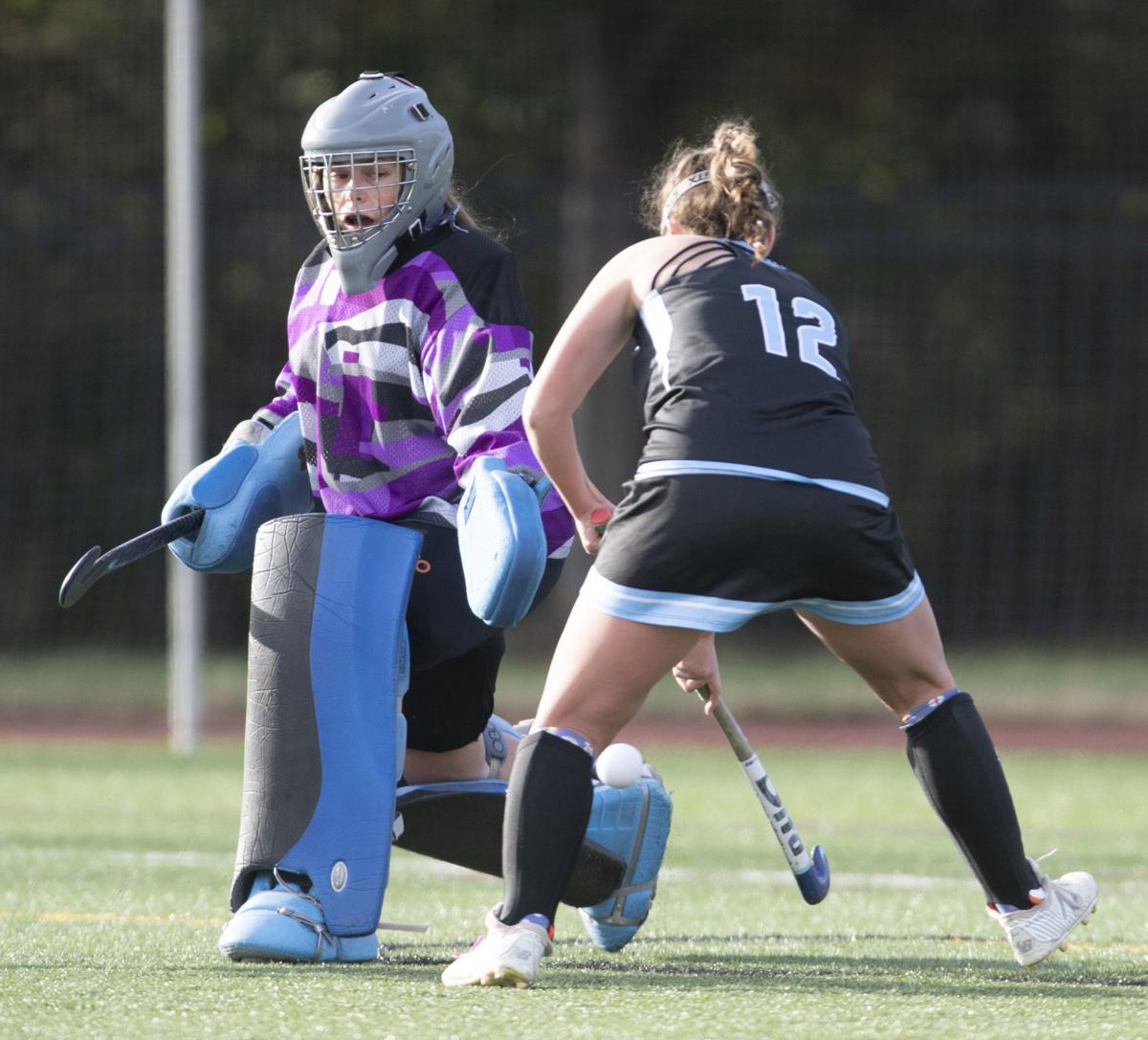 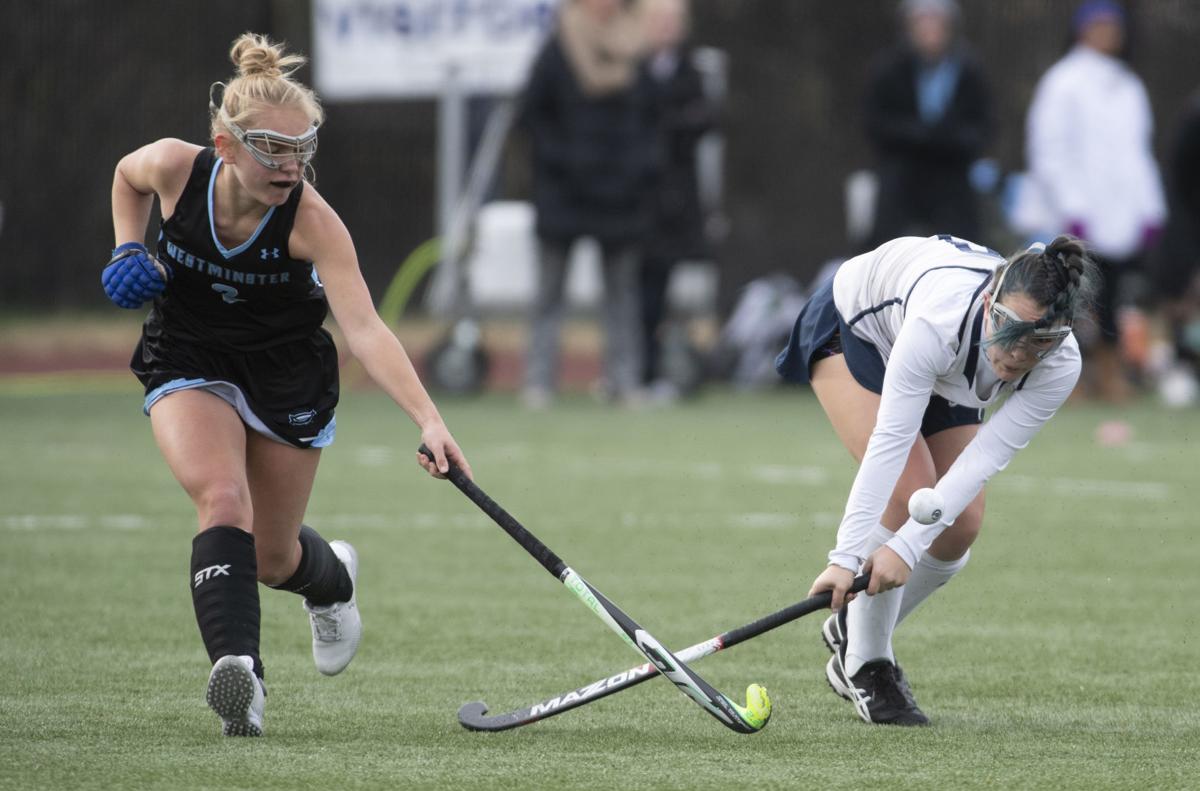 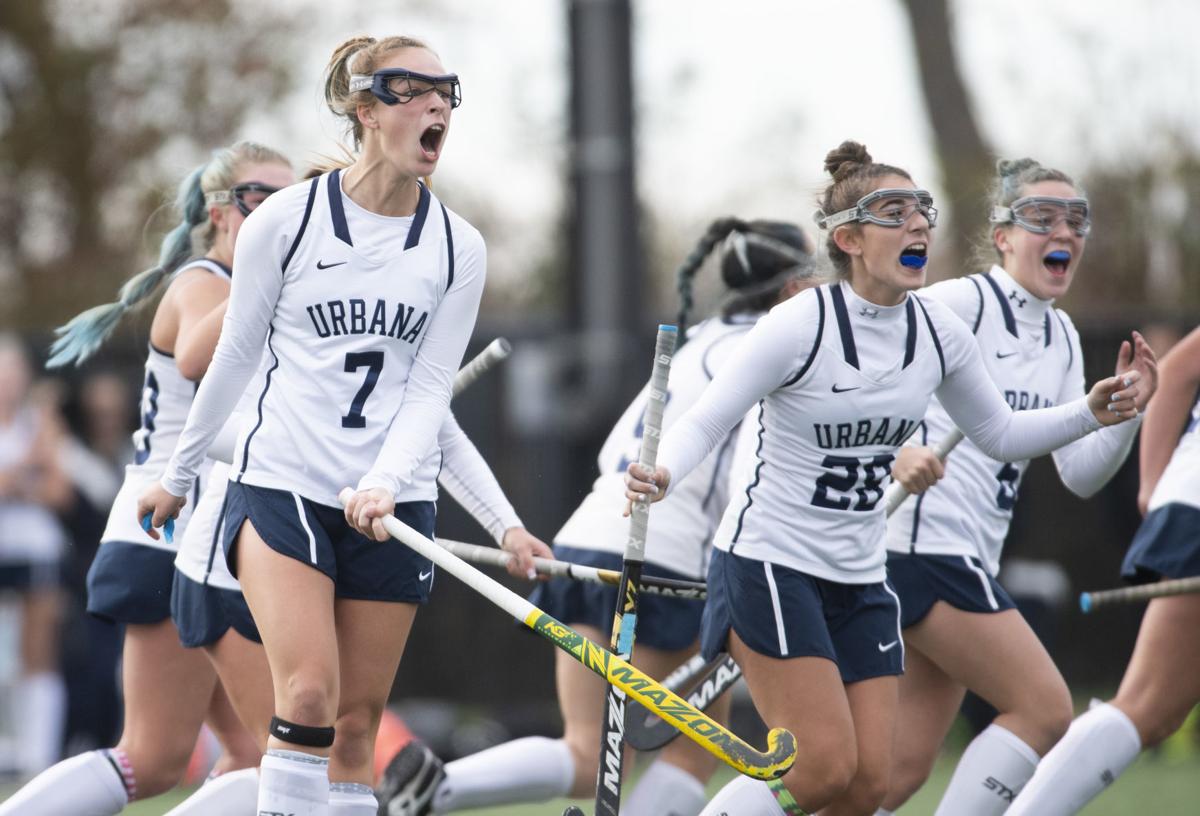 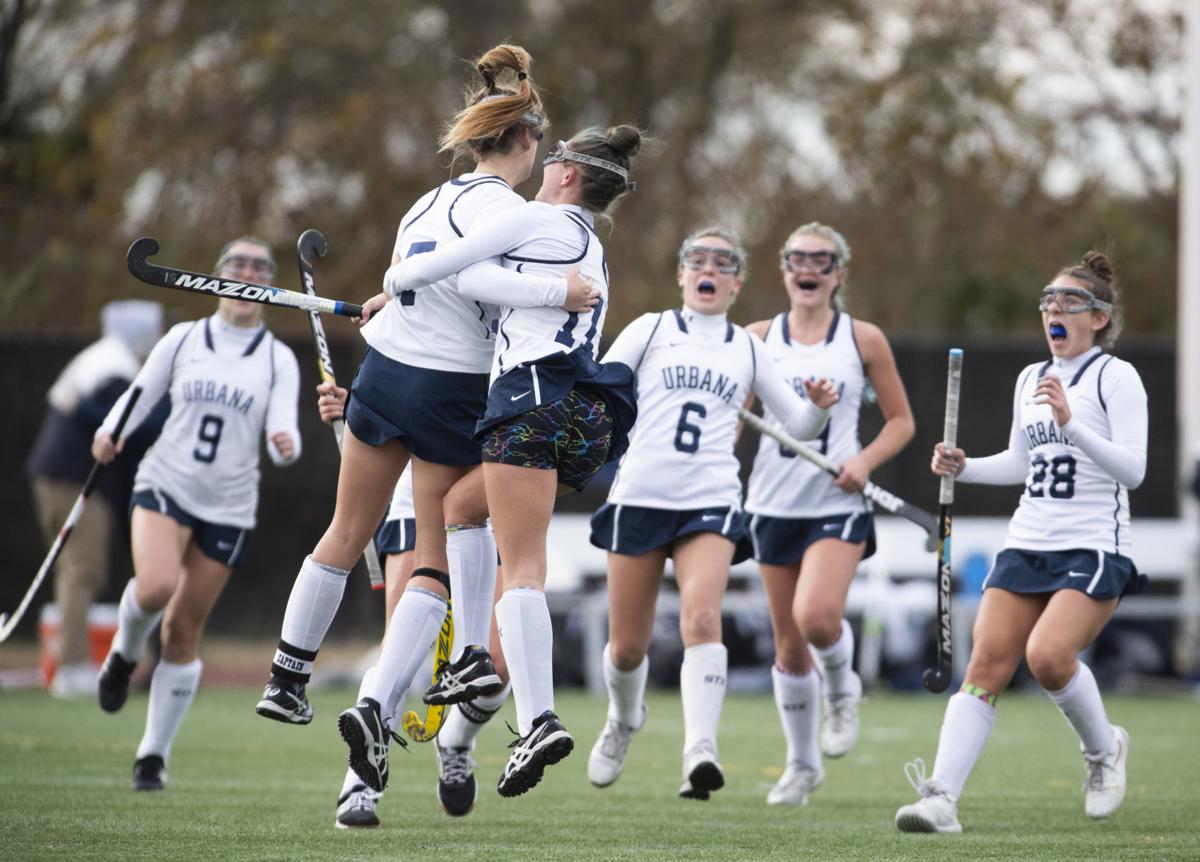 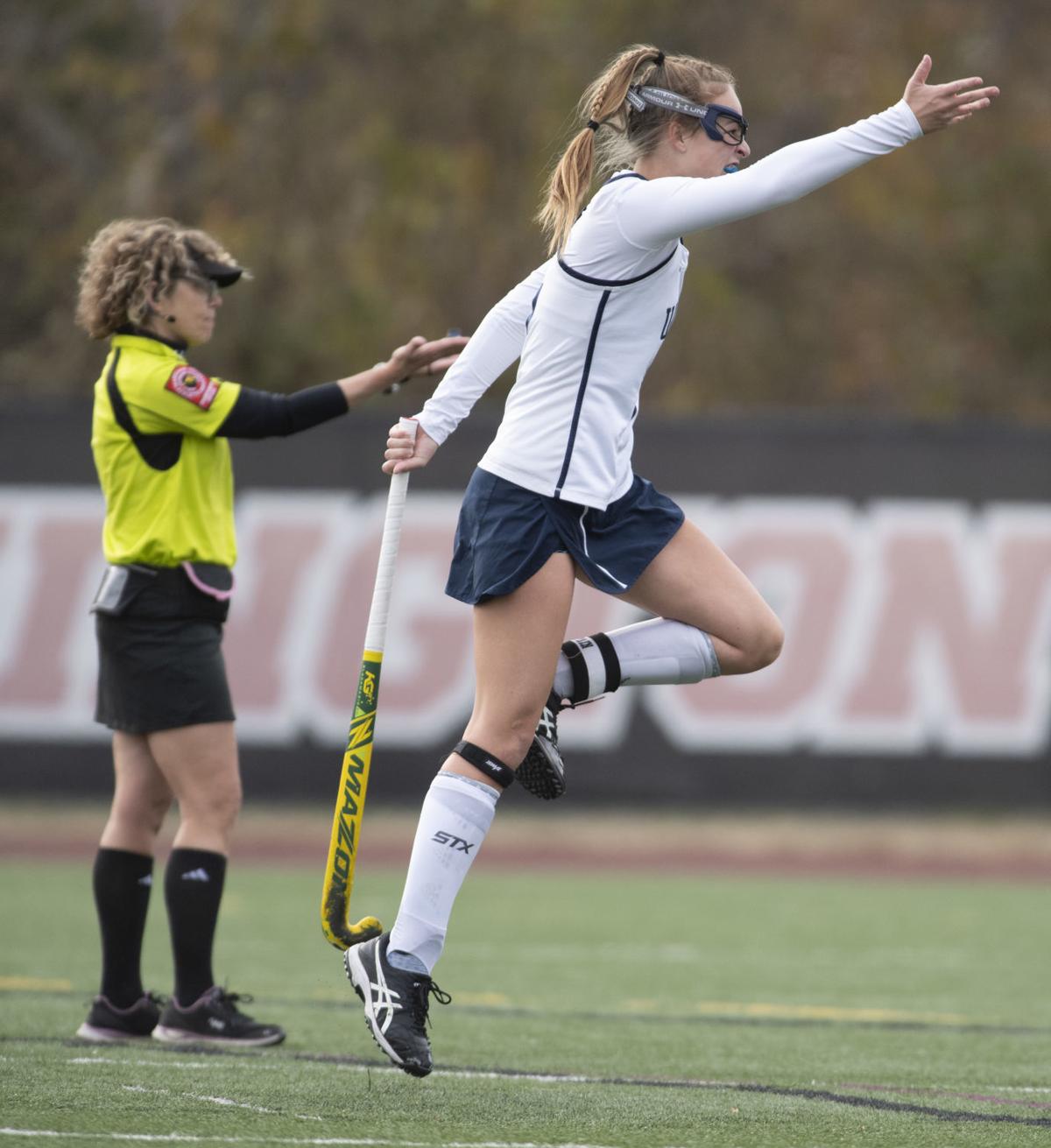 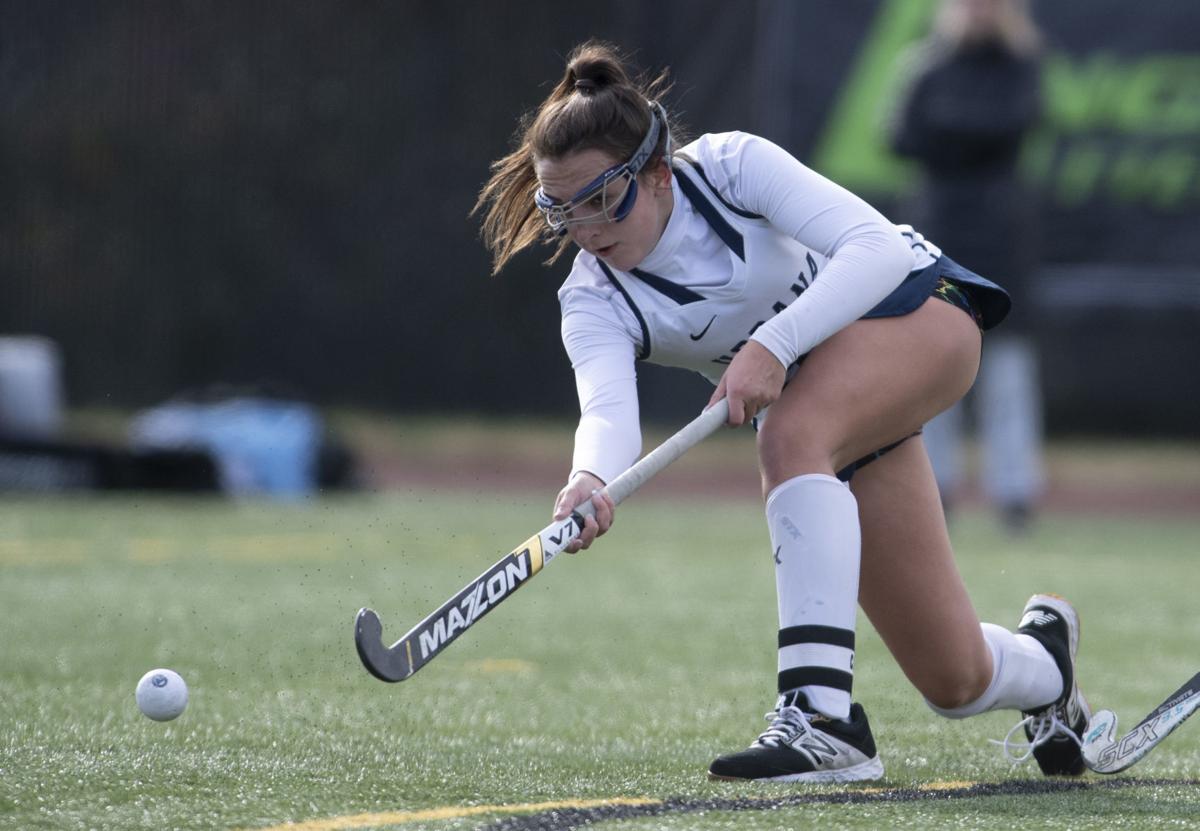 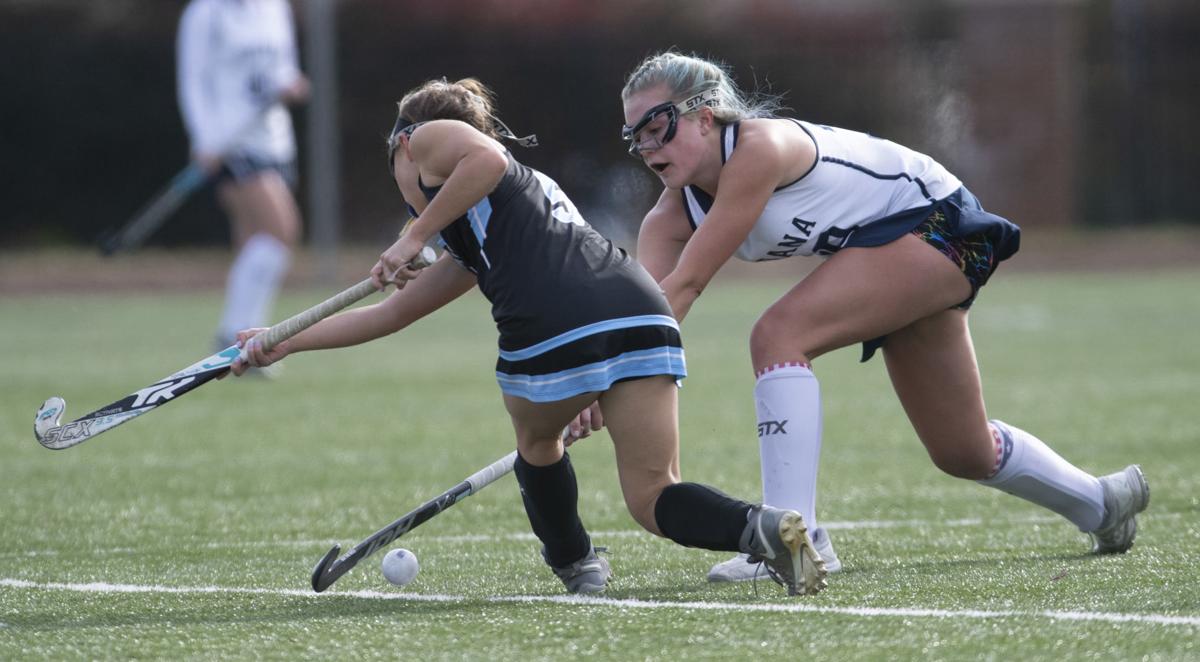 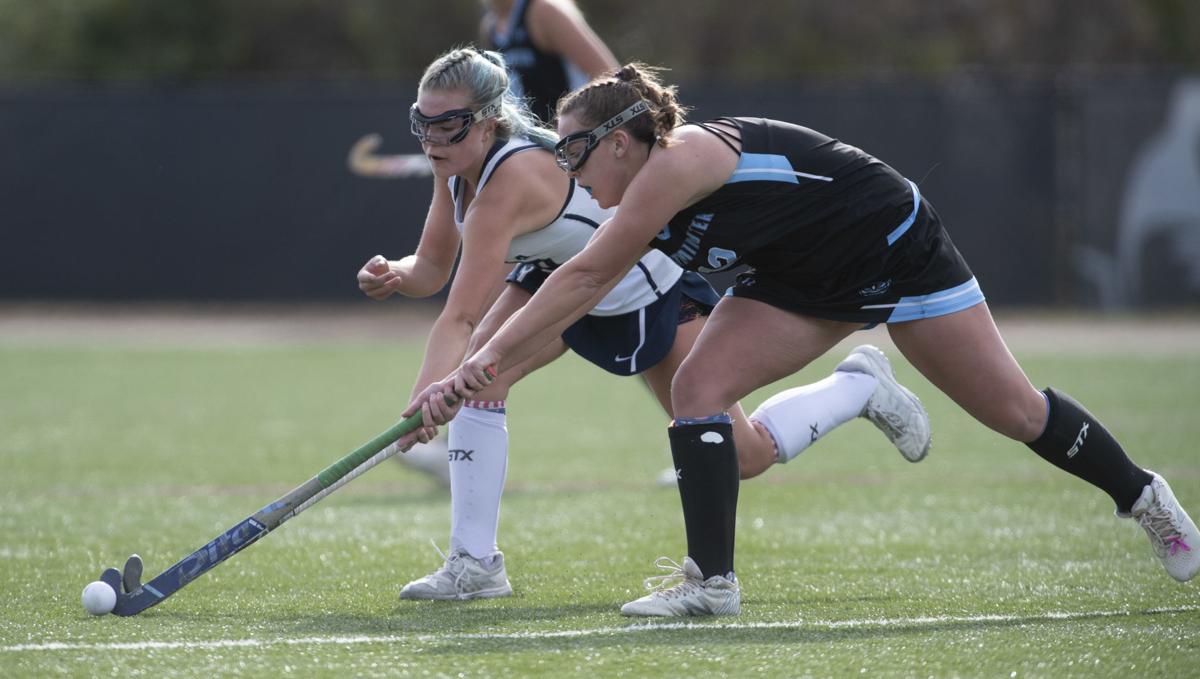 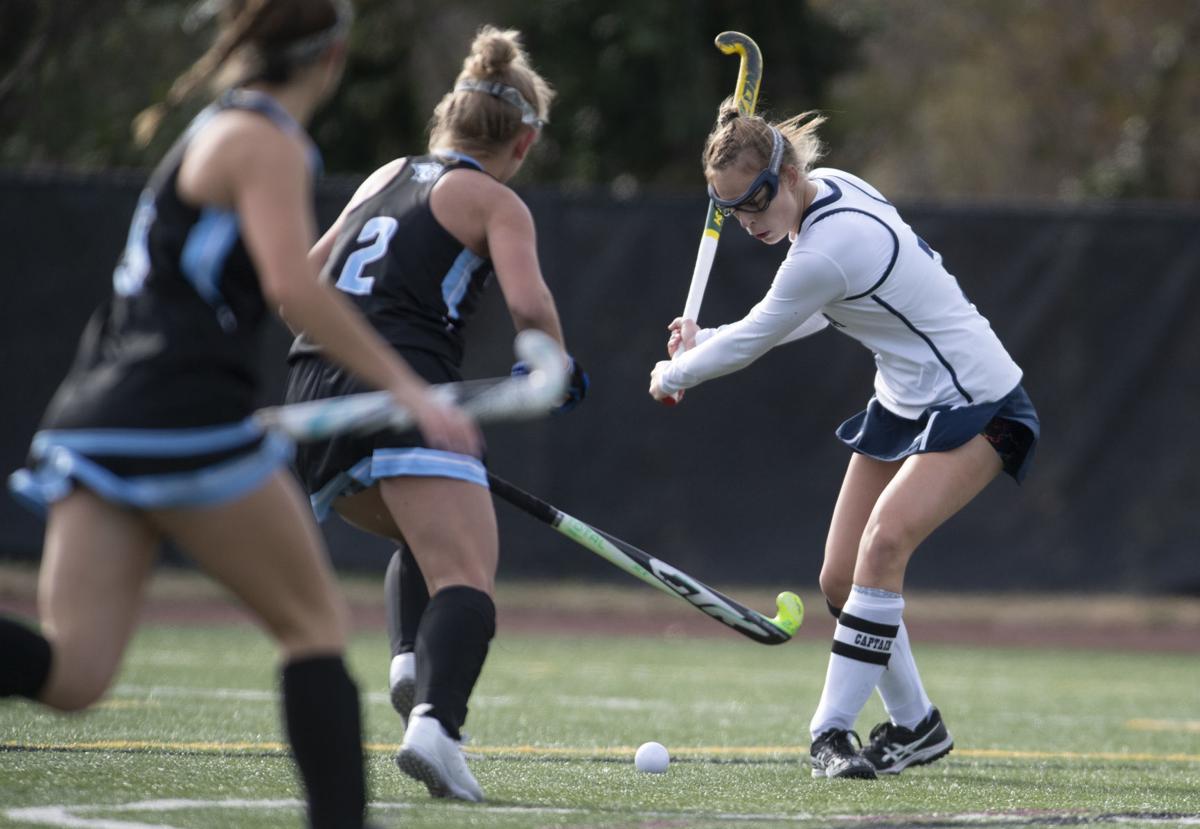 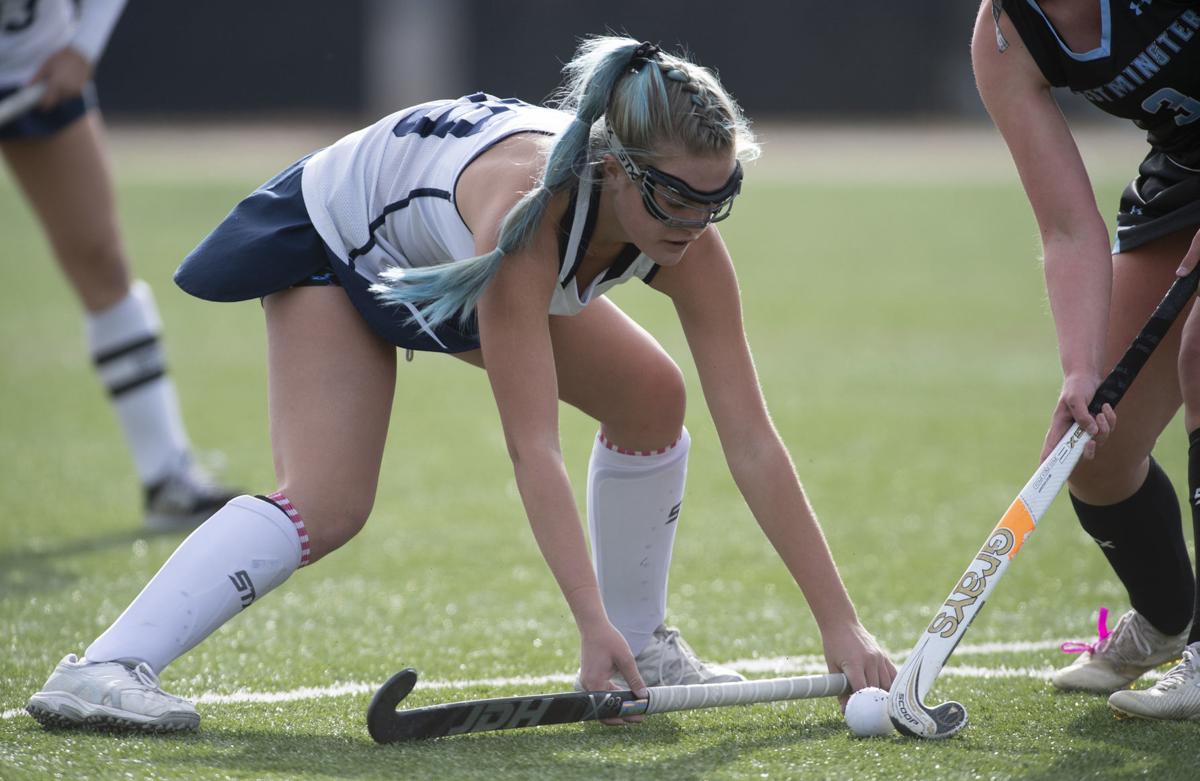 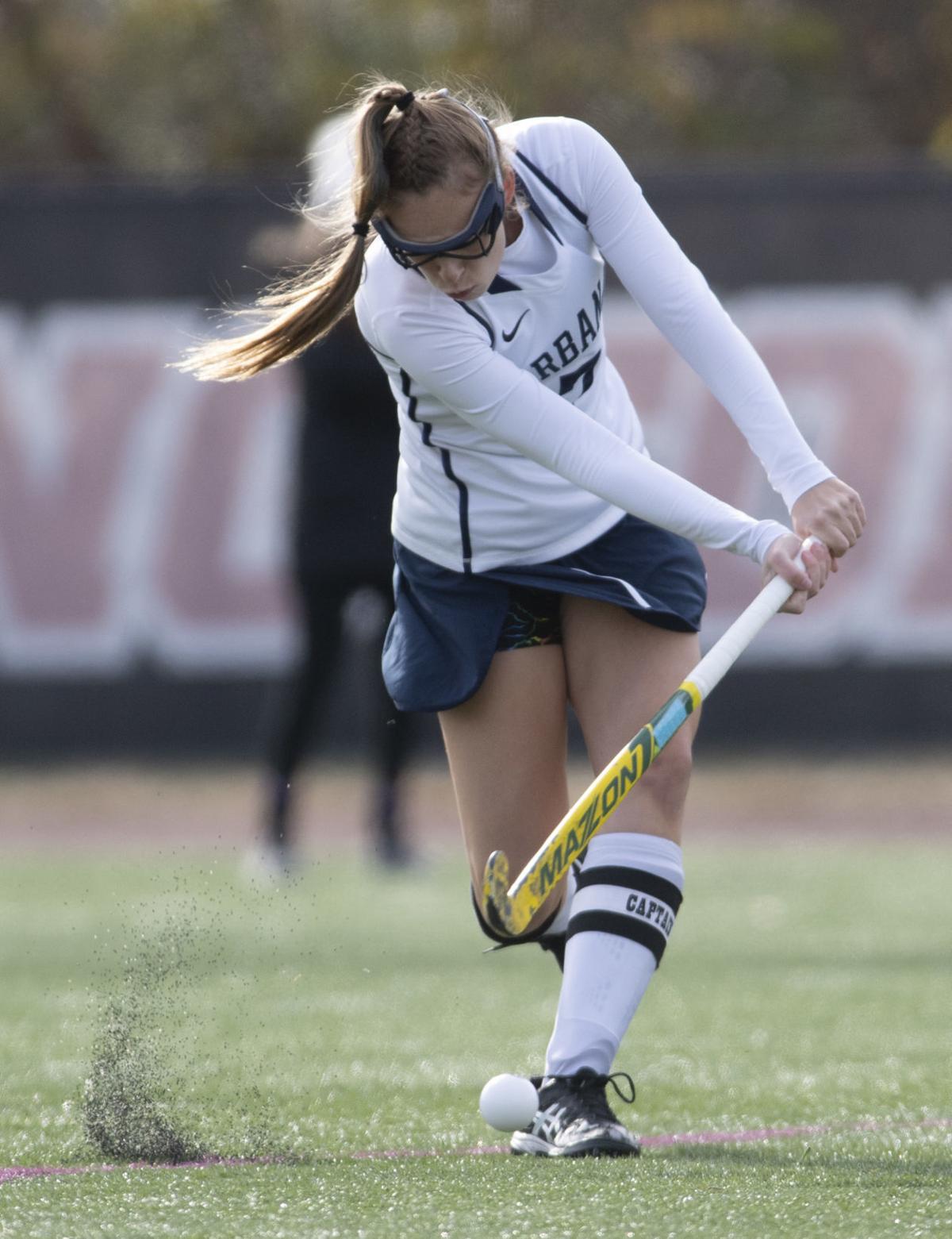 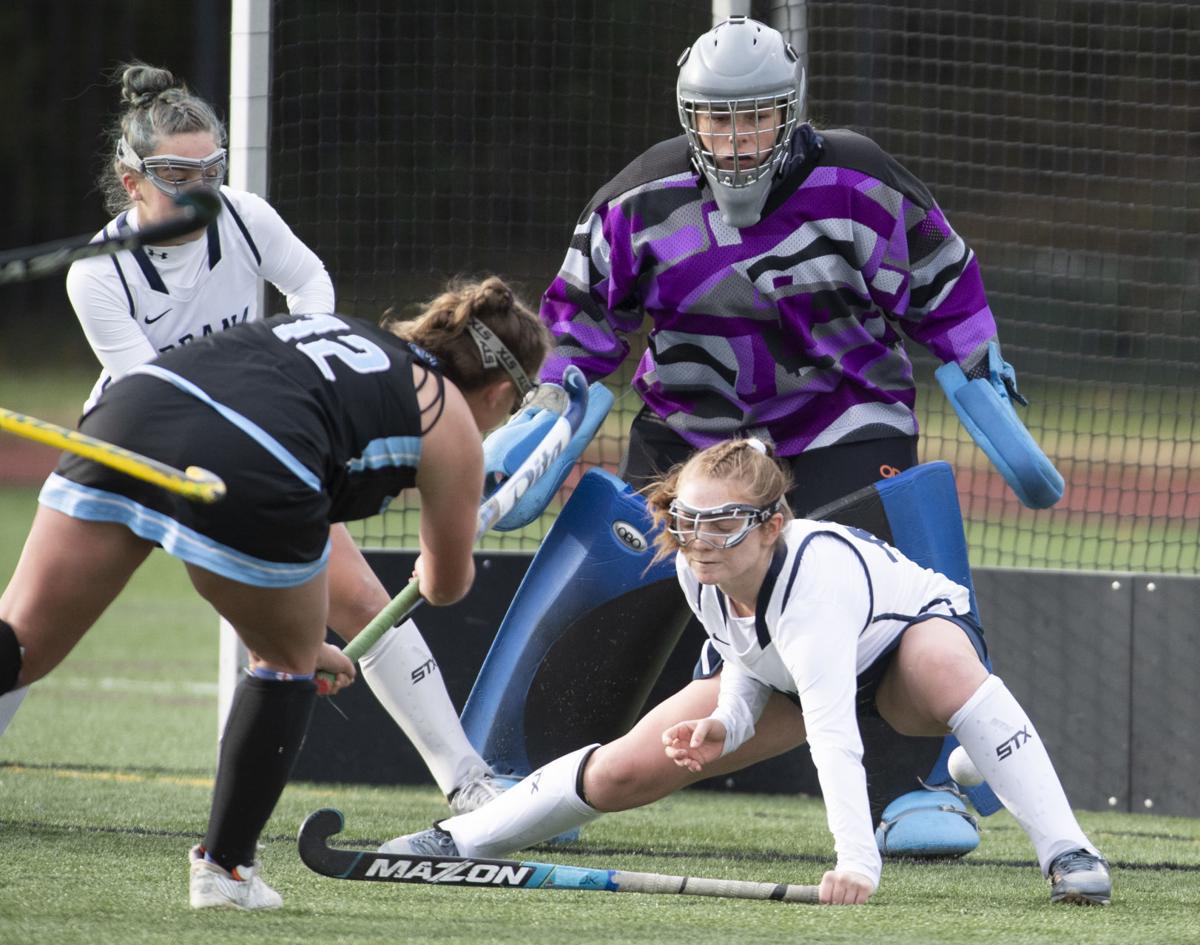 Urbana senior defender Riley Clipson attempts to block a shot by Westminster attacker Kirby Hennemen as the ball slips past her and junior goalie McKenna Ladson, evening the score in the second half. 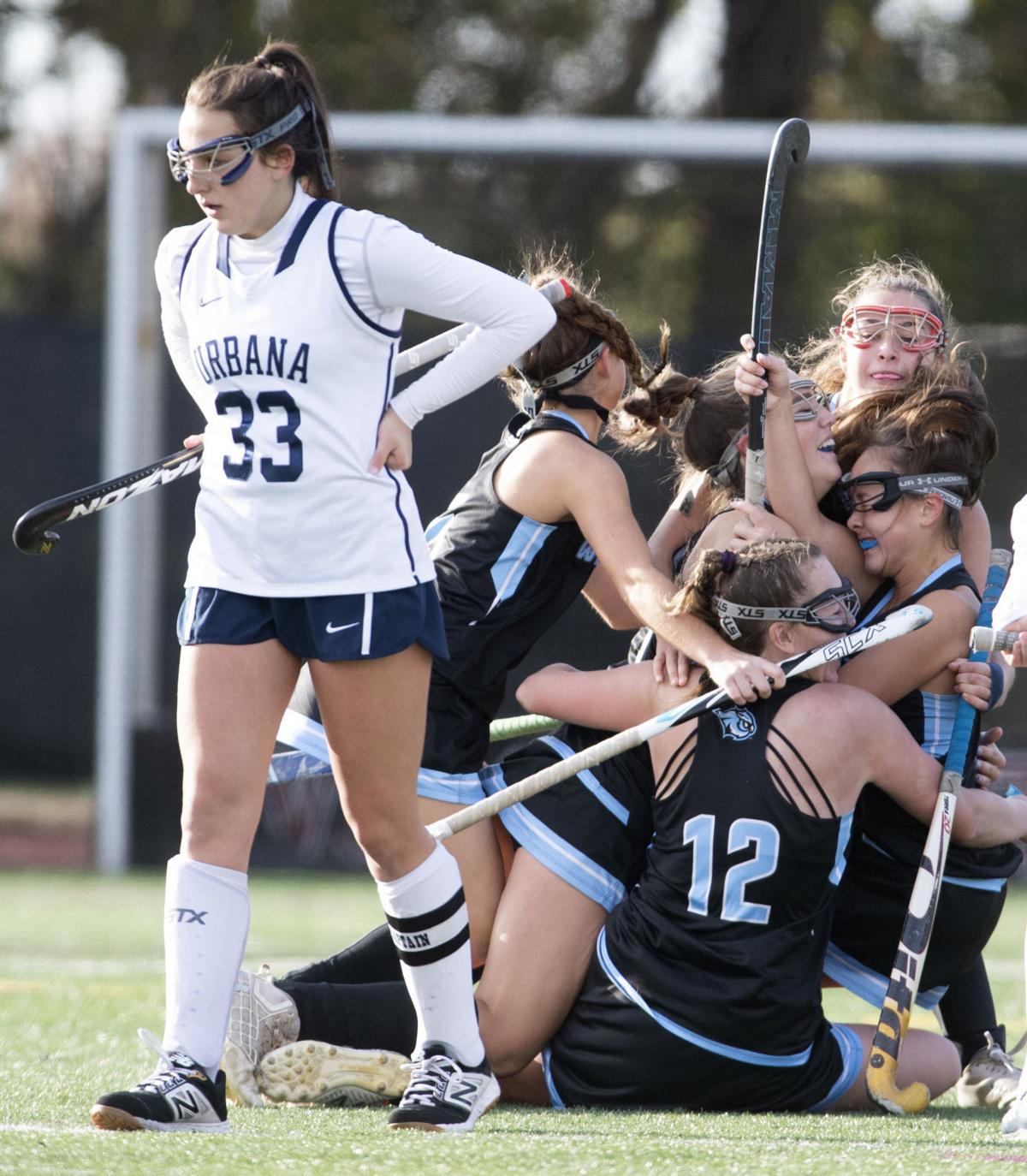 Urbana defender Ashlyn White makes her way off the field as Wetminster players celebrate a game-winning overtime goal in the Class 3A championship match Saturday on the campus of Washington College in Chestertown.

Urbana senior defender Riley Clipson attempts to block a shot by Westminster attacker Kirby Hennemen as the ball slips past her and junior goalie McKenna Ladson, evening the score in the second half.

Urbana defender Ashlyn White makes her way off the field as Wetminster players celebrate a game-winning overtime goal in the Class 3A championship match Saturday on the campus of Washington College in Chestertown.

The Hawks showed they weren’t overwhelmed by playing on this stage for the first time, and co-head coach Molly Stuart thought they turned in a dominant performance.

“So it’s really crushing to lose in overtime,” Stuart said. “But [the Owls] came out strong in overtime, so they deserved the overtime win.”

The Owls (14-5) immediately applied heavy pressure on the goal in overtime. They got the first corner of the extra period with 8:20 left, and Moshang whiffed on that play.

Given another chance on a corner less than a minute later, she didn’t waste it. After a crossing pass from fellow freshman Jess Kent, Moshang hit a shot that bounced into the right side of the cage.

“I saw a girl coming in from behind me, so I didn’t want to drive it,” she said. “So I push-passed it in and it ended up going in the goal.”

Ladson was enjoying the latest in a string of excellent games, finishing with five saves. But Moshang’s shot was too well placed.

“They took a great shot off a corner, it hit off post and went into the goal,” Ladson said. “It was a frustrating goal to watch, but it was a great play.”

Urbana got most of the promising scoring opportunities early on, but the game remained scoreless until the Hawks were awarded a penalty stroke when Zoe Nelson got hit while trying to take a shot.

Goodwin, Urbana’s top scorer, calmly fired a high shot to the left side of the cage, giving the Hawks a 1-0 lead with 20:05 left.

“I had a lot of faith in Maggie when they called the stroke,” Ladosn said. “It was a great feeling to be ahead first.”

That was Urbana’s 100th goal this season, but the Owls prevented them from getting another while battling to score themselves.

Westminster’s Kirby Henneman scored on an Audrey Detrow assist to tie the game with 16:49 left.

“They had a momentum change that we couldn’t keep up with, and that was ultimately what cost us the game,” Goodwin said.

Momentum was something the Owls clearly lacked early on, as the Hawks kept mounting dangerous scoring opportunities. The Hawks even took a shorthanded shot in the first half, forcing goalie Megan Watkins to make a save before all of Urbana’s four players returned to the field after being carded — three green cards and one yellow.

And when Westminster got a corner with all four Urbana players still out of the game, the Hawks stopped them.

“The first half was a little rough considering we couldn’t score when four girls had been carded on the other team,” Moshang said. “But once they got the stroke ... we didn’t agree with it, so we wanted to come out strong and score a goal, and we answered.”

Scoring against Urbana (18-2) was no easy task this year. The Hawks allowed just five goals all season heading into Saturday’s game.

No doubt, Ladson had a lot to do with such stinginess, but she was quick to share credit.

“It takes a lot of pressure off me being able to rely on my defense, with strong defenders like Riley [Clipson], Megan [Sullivan] and Ella [Landon] and everyone,” the goalie said.

Clipson and Sullivan are two of four seniors the Hawks will lose. The others are Maddie Hillman and Nellie O’Brien. But the good news is the Hawks return a bunch of contributors.

“Hopefully this motivates them to come out even stronger,” Stuart said.

Sounds like she doesn’t have anything to worry about in that department.

“I think we did a lot of good things to get here,” Goodwin said. “But I think we have some unfinished business that we’re definitely going to be doing next year.”