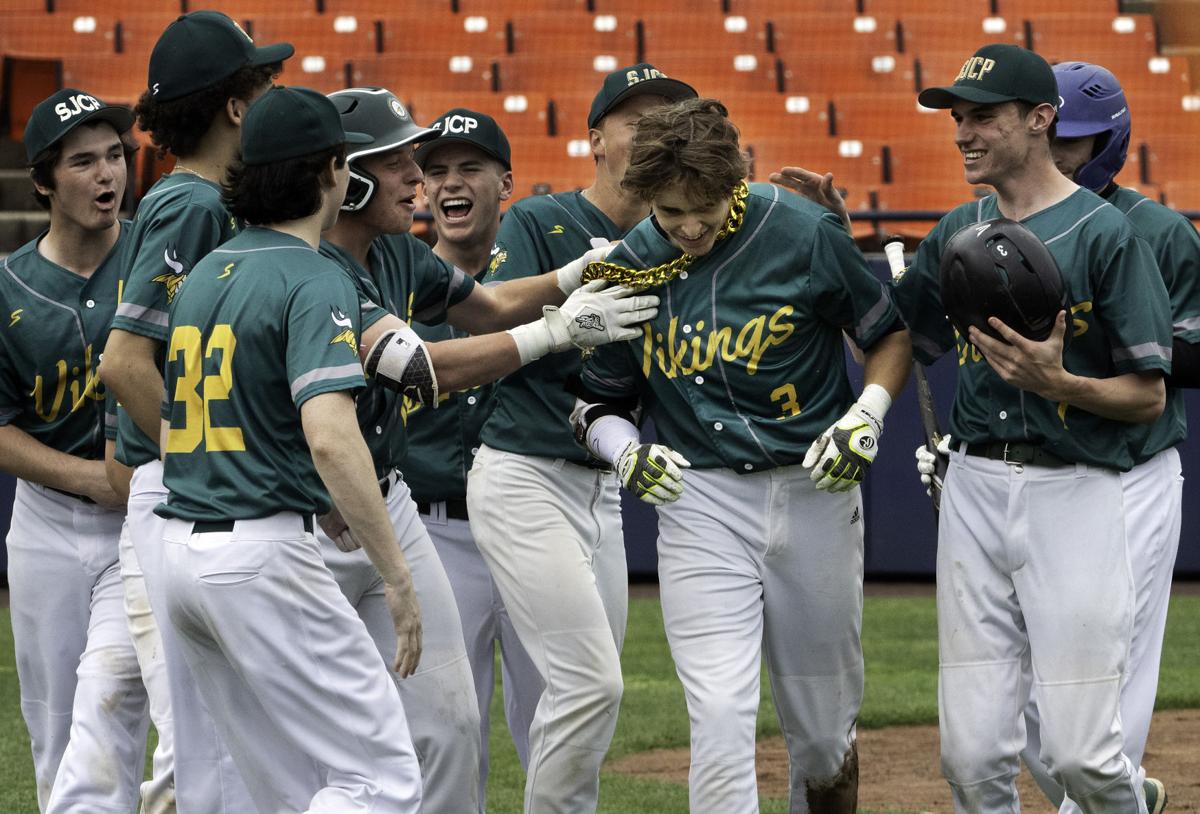 St. John’s Catholic Prep’s Josh Skowronski (3) is congratulated by teammates after hitting a home run with in the first inning Thursday against the Severn School at Nymeo Field. 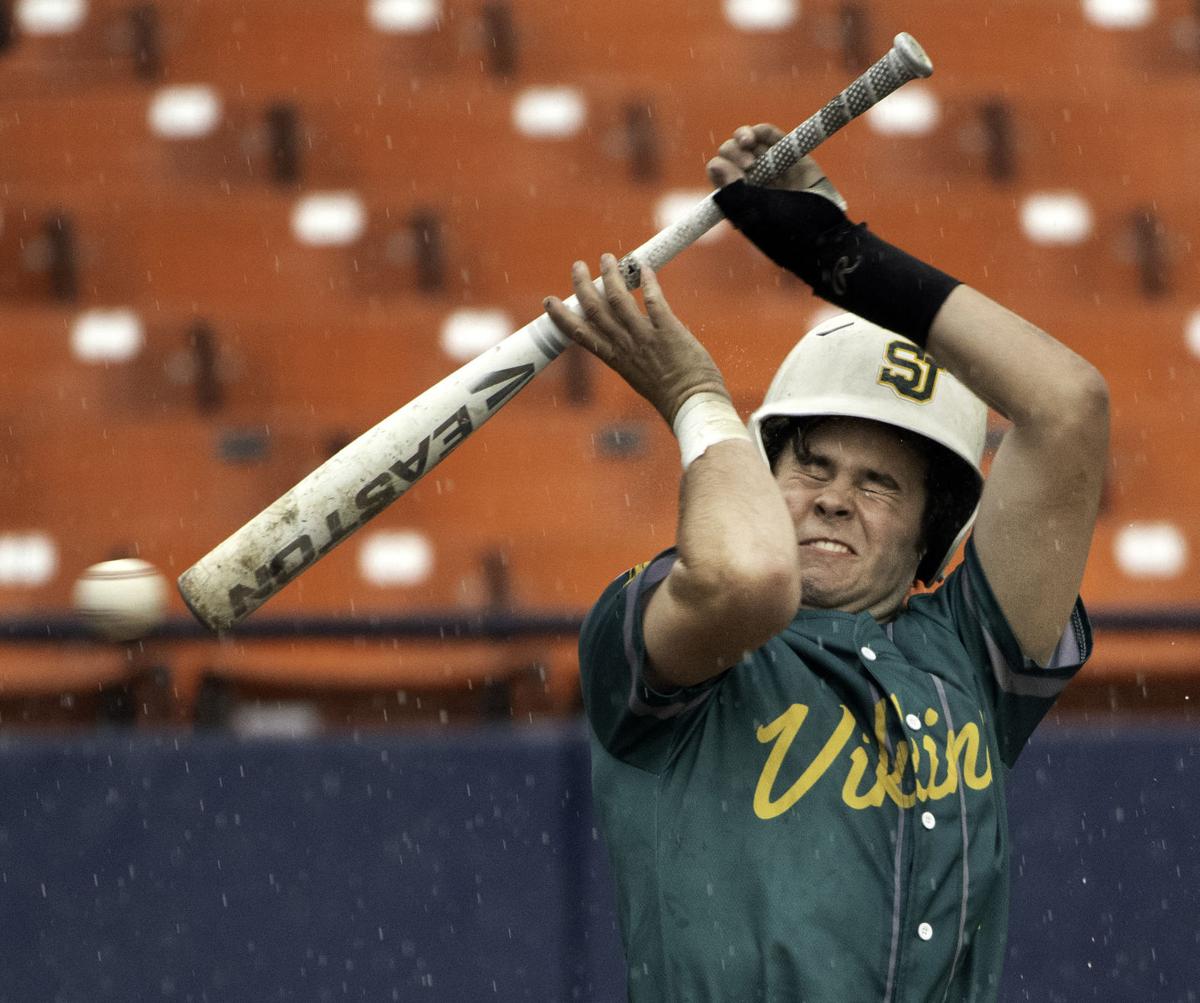 St. John’s Catholic Prep’s Nick Grutzkuhn attempts to avoid being hit by a pitch Thursday in the third inning against the Severn School at Nymeo Field.

St. John’s Catholic Prep’s Josh Skowronski (3) is congratulated by teammates after hitting a home run with in the first inning Thursday against the Severn School at Nymeo Field.

St. John’s Catholic Prep’s Nick Grutzkuhn attempts to avoid being hit by a pitch Thursday in the third inning against the Severn School at Nymeo Field.

An inspiring performance? The Vikings got that when junior starter Kyle Pershin, pitching for the first time since having surgery on his right throwing elbow in the fall, turned in a solid outing.

A quirky stat? St. John’s got that, too, when its No. 3 hitter, E.J. Lowry, got hit by a pitch in all three of his plate appearances.

About the only thing the Vikings lacked when they left Nymeo Field on Thursday was a result.

With St. John’s still batting in the bottom of the fifth and enjoying a 7-1 lead over Severn, play was halted because of rain, and it was initially believed the game would resume at a later date.

“If we can finish this game, that’ll be a great win,” Skowronski said on Thursday.

Turns out, the game was finished after all. The MIAA ruled on Friday that the contest was final, improving the Vikings’ record to 5-3 and putting a memorable game in the books.

“It was an interesting one, no doubt about that,” St. John’s coach Wade Newman said.

The intrigue started in the first inning when the Vikings started a rally with two outs.

Right after Lowry got hit by a pitch for the first time, the left-handed hitting Skowronski jumped on a first-pitch fastball on the outer half of the plate and drilled a line drive that sailed past diving center fielder Grant Cowell.

As the ball rolled toward the wall in dead center, which is 400 feet from home plate, Skowronski sped around the bases and was waved home by his third base coach. He beat the throw at the plate with ease.

“I wasn’t sure how deep it was out there, so I just went with [the coach’s guidance] and got around,” Skowronski said. “I put a good swing on it. The guy was playing pretty deep out there, made a dive, got past him, got a couple runs in.”

Skowronski has been producing during his first official season with the Vikings — he was on the team last year, but no regular-season games were played because of the coronavirus pandemic.

“He hits the ball really well and he’s only a sophomore,” Newman said. “He’s getting looks quite a bit, he’s turning some heads here the last couple months.”’

It was Skowronski’s first varsity home run, and he never expected it to be an inside-the-park one. No matter how he got it, it gave a boost to at least one of his teammates.

That was all the support Pershin and reliever Josh Brandt, who worked two scoreless innings, needed.

Pershin, a right-hander, struck out three, gave up two hits and one run (which was unearned), walked one and hit one batter in three innings of work. Hard to tell he hadn’t pitched in a game since August, before an elbow injury put his career on hold.

“For his first time out there, yeah, that was fantastic, exactly what you’re looking for,” Newman said. “Throwing strikes, he commanded his pitches, and that’s pretty good for the first time off surgery.”

That surgery was necessary after Pershin suffered an olecranon bone fracture.

“They had to shave down some bone, and then they had to pin down my UCL with some mesh,” Pershin said. “It’s been six or seven months since my surgery, so it’s a been a long process. I’m just happy to be back out here.”

He showed an ability to dodge danger early. After two of the first three batters he faced reached base, Pershin induced a groundout and flyout to strand both runners.

“I was a little nervous, of course, a little amped up,” he said. “But once I got out there and just felt it and everything was working, I just came out there and did my thing.”

“We only wanted him to go 30 pitches,” the coach said. “I’ve done it before, I had two elbow surgeries, and the easiest way to do it is get ready for the game, throw your 30 pitches and then you’re done with it.”

Pershin had more wiggle room after the Vikings added three runs in the second, which was highlighted by David Chandler’s two-run, two-out, bloop single to shallow left-center.

The Vikings scored two more in the fifth, when Skowronski got his third RBI on a groundout and Lowry scored on a wild pitch after reaching on his third hit-by-pitch.

“You don’t usually see that very often, where you get hit three times in a row,” Newman said.

Play was halted for good after St. John’s lefty Gabe Casteel hit a two-out infield single in the fifth.