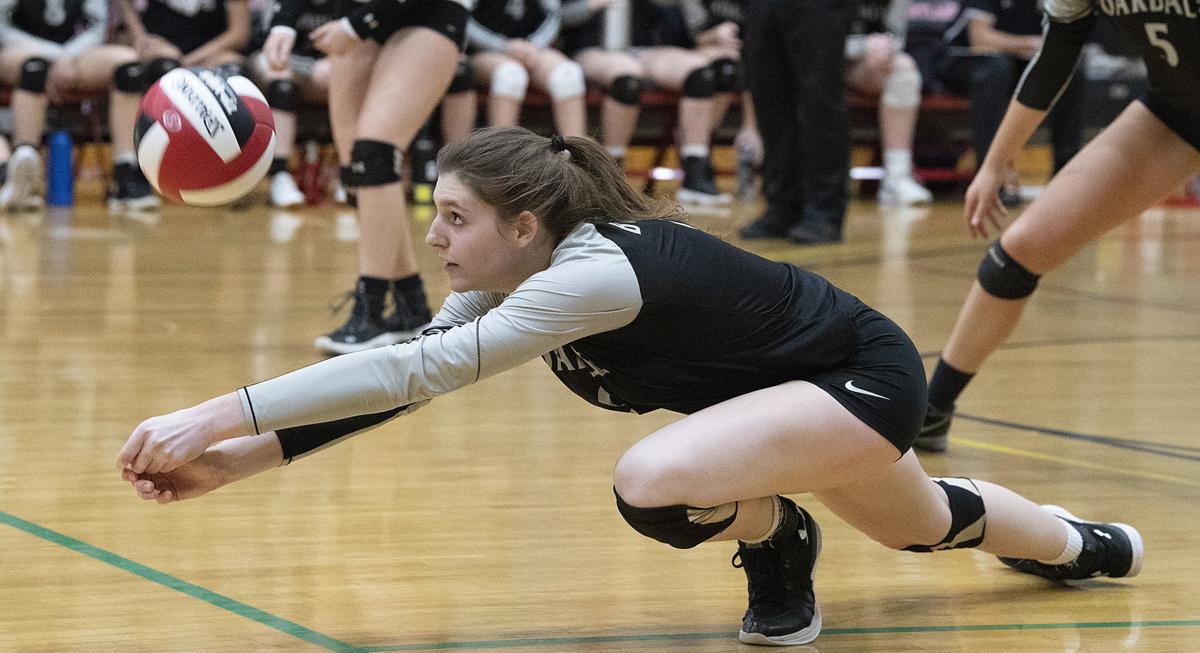 Oakdale’s Jen Chomiak gets a dig in the Class 2A volleyball state final Saturday against Century in College Park. 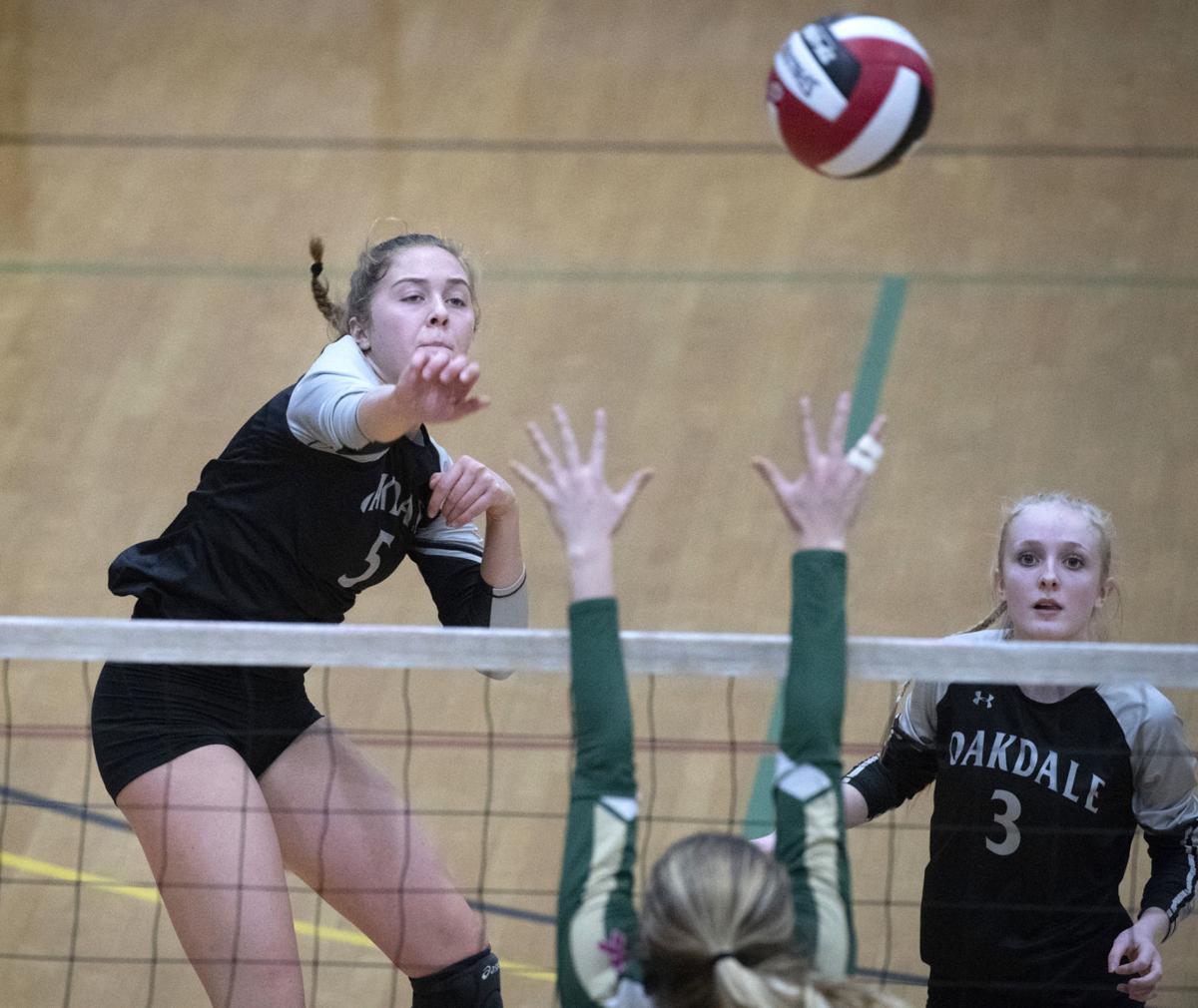 Oakdale’s Jess Twilley sends a spike across the net in the Class 2A volleyball state final Saturday against Century in College Park. At right is Oakdale’s Jenna Harding.

Oakdale’s Jen Chomiak gets a dig in the Class 2A volleyball state final Saturday against Century in College Park.

Oakdale’s Jess Twilley sends a spike across the net in the Class 2A volleyball state final Saturday against Century in College Park. At right is Oakdale’s Jenna Harding.

COLLEGE PARK — Oakdale volleyball players congregated on the court one last time on Saturday, and some had tears in their eyes.

That was understandable. Entering this season with realistic hopes of winning their program’s third state title, the Bears had just fallen short of that goal after losing 25-19, 25-19, 20-25, 25-16 to Century in the Class 2A state championship match at the University of Maryland’s Ritchie Coliseum.

But even the sting of that defeat didn’t prevent the Bears from acknowledging all they had gone through just to get this far. How they continued their postseason march despite losing one of their three cornerstone seniors, setter Sydney Katz, to an ACL tear in the first round of the playoffs.

“Definitely disappointed, but we weren’t even sure if we’d be able to make it here,” said Jess Twilley, another one of Oakdale’s cornerstone seniors along with Jen Chomiak. “We lost, yeah. But I’m still proud of us. We did great things.”

After the Bears swept La Plata in the state semis, proving makeshift setters Elise Smith and Jenna Harding could play solidly enough in their new roles to keep the Bears (17-2) in serious contention, they looked to do even more great things against Century (17-2).

All seemed well enough in the first set when Chomiak used her left hand to pound a kill down the line, narrowing Century’s lead to 16-14. But the Knights then went on a 9-5 run.

The Knights had some good fortune during this stretch. One of their points came on a rally that was prolonged when the ball sailed over the net after bouncing off Century senior setter Ali Whitworth’s foot. But many of those points came on Century’s ability to consistently prevail in the serve and serve receive battle, something it did most of the match.

When Century struggled to get serves over the net in the third set, Oakdale pounced. And Twilley closed out the set with some fine serving herself, getting back-to-back aces for the final two points to finish off a win that kept Oakdale’s title hopes alive.

“We put a lot of intensity into that game because the last two sets that we played weren’t us; we kept missing our serves and we weren’t doing the best on serve receives,” Chomiak said. “So when we came back, I was like, ‘We got this, we got this.’”

But Century bounced back with authority in the fourth set. Fiery senior outside hitter Caroline Mastria unleashed more kills (she finished with a match-high 17), roaring and jumping after each one.

And Mary Huber got match point with a kill from the right side, giving Century its second state title, with the last one coming in 2011.

As the Knights posed with their championship plaque, there were Bears on the other side of the floor who knew how they felt. Twilley, Katz and Chomiak played for a 2017 Oakdale team that won a state title.

“They can go out with their heads high because they have a state championship, too,” Dorsch said. “We didn’t want to end here [with a loss], but it’s still an awesome place to be. We’re really proud of them.”

While Katz didn’t have any stats on Saturday, she had fond memories of battling with her fellow seniors for years and newcomers who emerged this season.

“We worked so hard to get here,” she said. “And these girls — they’re my favorite memories. Just being with them every day at practice.”

Like Katz, Dorsch praised the job Smith and Harding did filling in as setters. Both had scant experience performing that role before being thrust into it, after just one day of practice, for Oakdale’s regional championship match against defending state champ Williamsport.

“At first I was a little bit scared, like, ‘Oh no, I’m going to mess up,’” Harding said. “But as soon as I got to the game and got excited, with everyone else’s energy and encouragement, I was like ‘Oh, OK, we can do this.’”

Harding finished with 16 assists and eight digs, and Smith had six kills and six assists. Gabby Barth had eight digs. Those three will be back next year for an Oakdale team that loses just four seniors. Granted, the departing seniors will be sorely missed, but they had high hopes for the returnees.

“Twelve are coming back. Everyone’s playing travel ball, everyone’s going to be training all year long,” Twilley said. “We’ve always had a competitive program at Oakdale, and I know they’re going to do great things.”