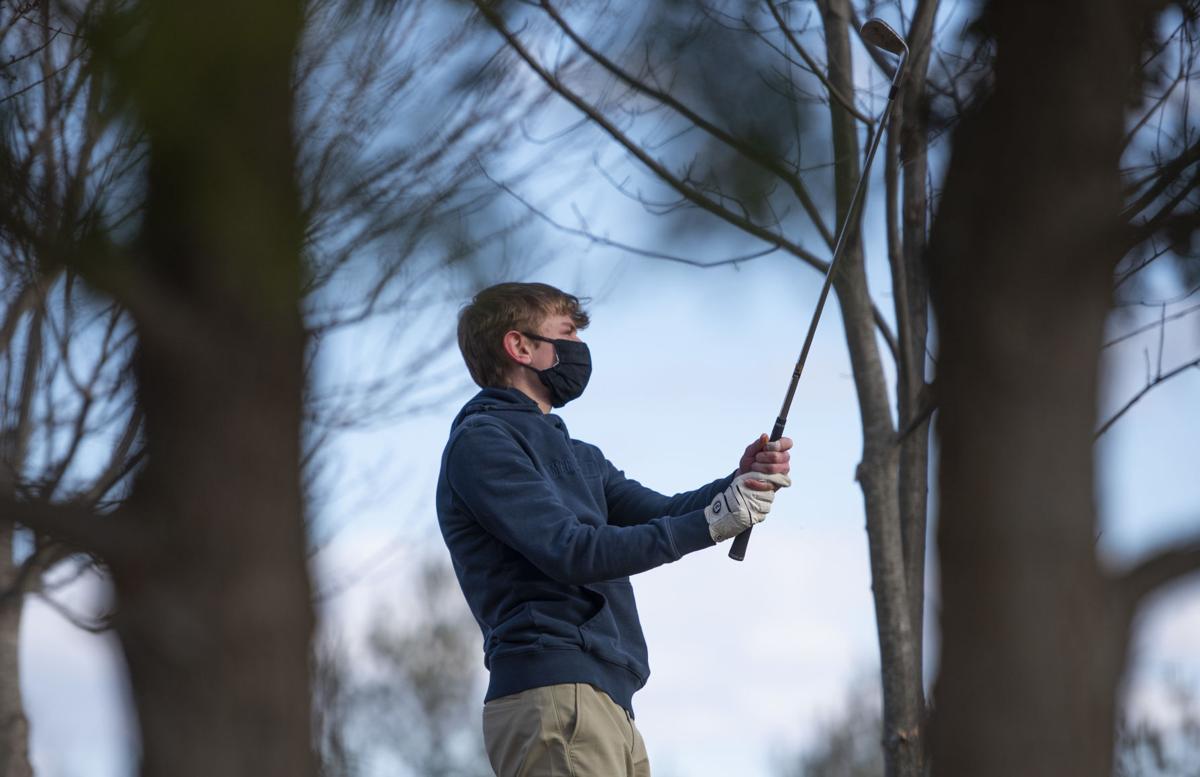 Catoctin’s Zane Shugars watches his shot during a match against Middletown Thursday at Richland Golf Course in Middletown. 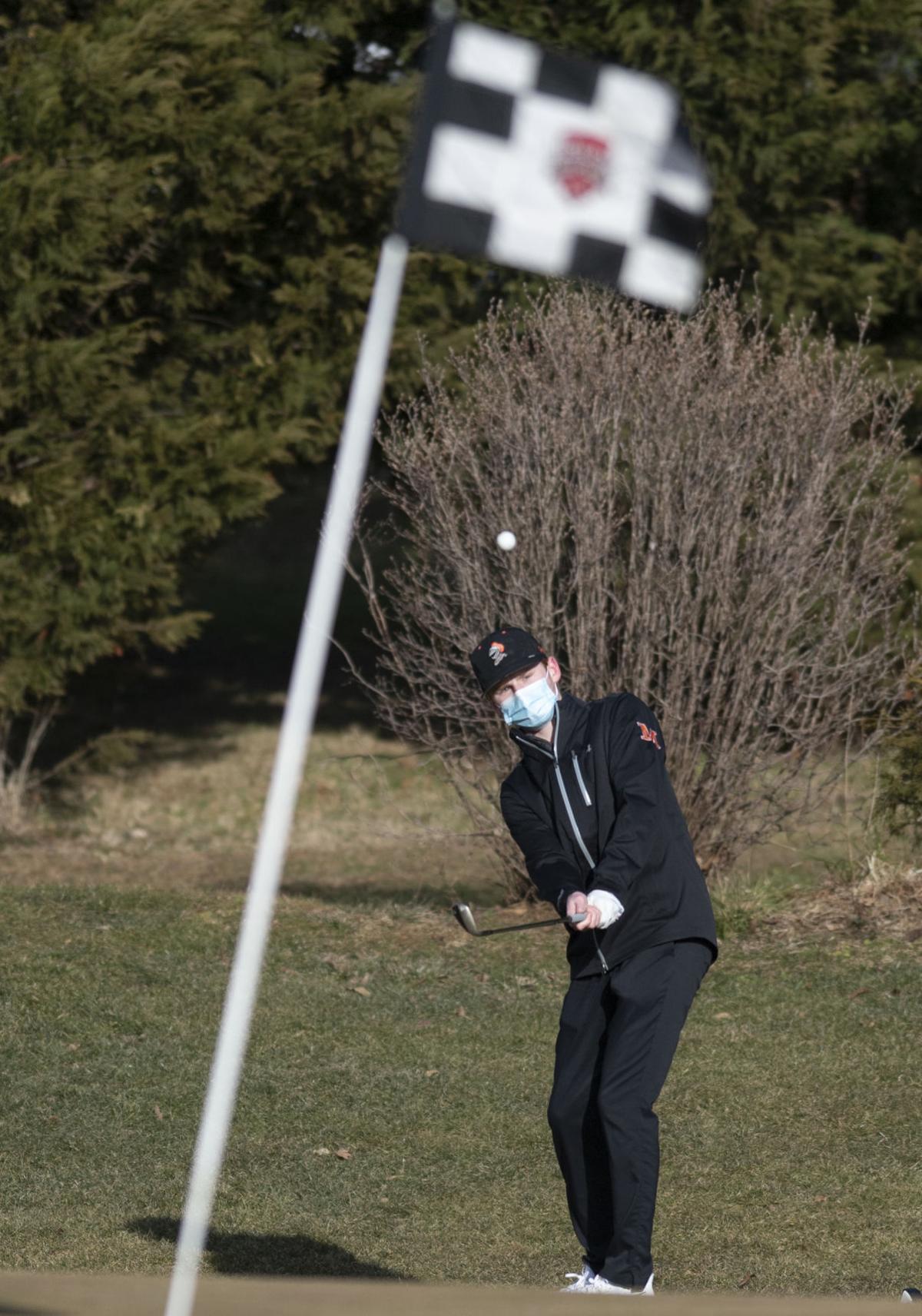 Middletown’s Steven Hartman chips onto the green during a match against Catoctin Thursday at Richland Golf Club in Middletown.

Catoctin’s Zane Shugars watches his shot during a match against Middletown Thursday at Richland Golf Course in Middletown.

Middletown’s Steven Hartman chips onto the green during a match against Catoctin Thursday at Richland Golf Club in Middletown.

MIDDLETOWN — It was cold, it was windy and it got dark in a hurry on Thursday.

Not the best conditions for golfing, but Middletown and Catoctin made the most of it.

The Knights and Cougars were happy just to be able to get on the links at Richland Golf Club for a dual match in this abbreviated fall sports season, played with winter entering its final three weeks.

“It’s extremely nice, just to be able to actually get out and play some golf,” Middletown senior Avery Bateman said.

The team scores were higher than usual, given the extreme weather conditions, which featured wind gusts and decreasing temperatures as the day progressed. The match took some three hours to play. Middletown defeated Catoctin 192-252.

Typically, a dual nine-hole golf match takes about two and a half hours to play. The Knights and Cougars had just three groups of golfers out on the course, but by the time the final group finished their round, it was dark.

“If there had been another group behind that last group, they wouldn’t have been able to finish,” Middletown coach Ed Roark said. “But we got it in.”

“It was definitely cold and really windy,” Bateman said. “Of course, the wind would have to conveniently quit just as we’re done.”

Playing on the front line at Richland Golf Club, Middletown and Catoctin took their turns against each other — and the elements. The wind played havoc with nearly every shot. Even the straightest drives off the tees would take a strange twist or turn every now and then.

Depending on where you were on the course, golfers had to contend with mixes of a tailwind, headwind or crosswind. It was a new experience for Bateman. Like many golfers, he’s used to playing in warmer weather.

“The wind was definitely a huge factor,” Bateman said. “You had to play with it. You also had to try and keep your hands warm, too. Once it got colder, it was hard to hit the ball.”

Low individual scorers on this day? Forget about that, too.

The wind and the cold were clearly in charge. There wasn’t a good round to be had anywhere on the course.

Typically, a good nine-hole round, under more ideal conditions, brings scores ranging from the mid-to-upper 30s. The best anyone could do against the elements was a 44 by Middletown’s Steve Hartman, making him low medalist on the day.

“No, you weren’t going to see any low scores today,” Bateman agreed. “Not with this weather.”

Just one birdie was recorded among all of the golfers. Catoctin’s Ryan Sullivan chipped one out of the bunker on No. 6.

“The bunker was a little hard,” said Sullivan, who tied with teammate Kyle Cantwell for low score for the Cougars at 58. “But I was able to make it work.”

At the end of the day, first-year Catoctin coach Jeremy Johnson echoed the feelings of Roark and all of the players, just grateful to have a match at all.

“I’m thankful the school system are giving these players the chance to play,” Johnson said. “It’s a different scenario. It can always get better; it can always be worse.”

I’m happy for the players and that they have the chance to play sports again but...should they really be out there? I mean masks work but isn’t there a chance that the winds could blow COVID-19 their way?? And then they could take it home to their families? Think of the consequences. All to play a silly game. What’s going to happen next? Send the kids back to school?? Oh the horror!

It's golf gramps. Outside. On a cold and windy day. Players separated by more than the mandatory 6 foot spacing. Still masked. Relax.

No sense of sarcasm I see.