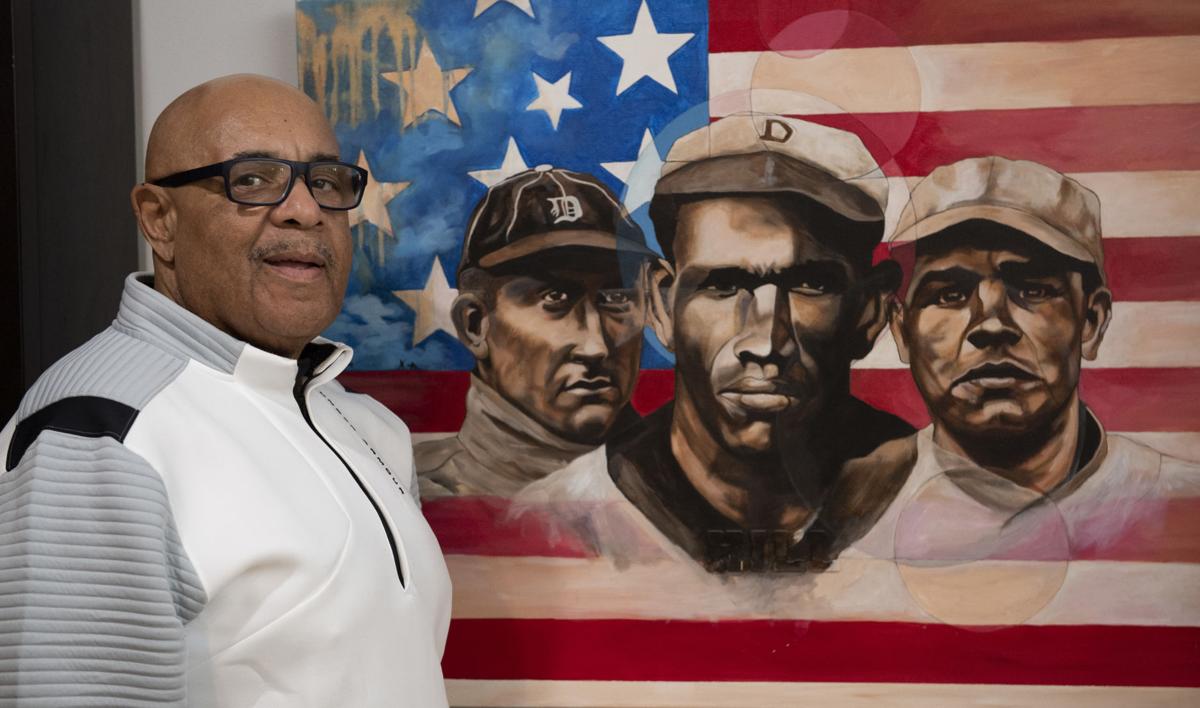 Ron Hill’s great uncle Pete Hill (pictured at center) was one of the greatest Black baseball players in history and is enshrined in the National Baseball Hall of Fame. 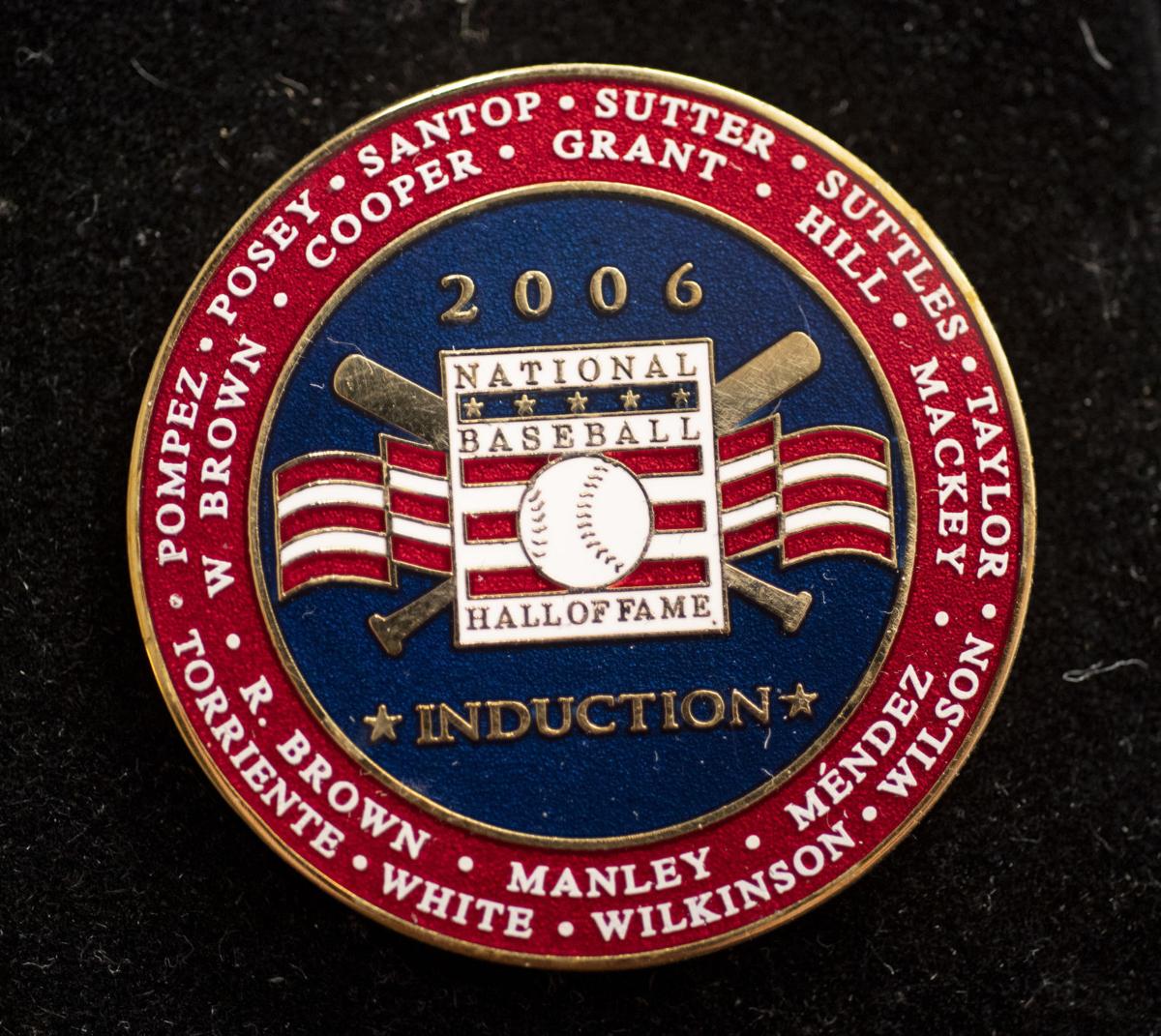 This is the Hall of Fame induction pin, belonging to Ron Hill, whose uncle, Pete Hill, is enshrined at the Cooperstown, New York, museum.

Ron Hill’s great uncle Pete Hill (pictured at center) was one of the greatest Black baseball players in history and is enshrined in the National Baseball Hall of Fame.

This is the Hall of Fame induction pin, belonging to Ron Hill, whose uncle, Pete Hill, is enshrined at the Cooperstown, New York, museum.

Being a Black baseball player in the first quarter of the 20th century, Pete Hill wasn’t allowed to play in the major leagues.

And most of his career occurred during the pre-Negro League era, so his legacy might’ve been overshadowed — if not downright forgotten — when Negro League greats like Josh Gibson eventually got the recognition they undoubtedly deserved.

But possessing a bat that could hit for average and power from the left side of the plate, a glove that could snag anything hit in the outfielder’s general vicinity, a strong arm and speed, Hill was too good to be overlooked by baseball historians.

As his posthumous induction into the National Baseball Hall of Fame in 2006 indicates, Hill’s name belongs right up there with the game’s all-time greats. Good thing the Hall of Famer’s great nephew, 74-year-old Frederick resident Ron Hill, helped make sure the correct name is the one that will be remembered.

Living in Pittsburgh when his great uncle was inducted into the Hall of Fame in 2006, Ron Hill didn’t even know he was related to Pete Hill at the time. But after finding out that bombshell from a cousin, Ron Hill discovered another surprise — the name on his relative’s Hall of Fame plaque, Joseph Preston Hill (Pete was his nickname), needed to be changed.

“They had it wrong,” Ron Hill said.

The do-it-all center fielder who is credited by Baseball Reference with a .330 batting average in a career that lasted from 1899 to 1925, the player and manager who blazed a trail that would be followed later by Negro League greats, was actually named John Preston Hill. Also, Hall of Fame library records indicated Hill was born in Pittsburgh in 1880 instead of in his actual birthplace of Culpeper County, Virginia, circa 1882.

Hill enlisted the help of Zann Nelson, a Culpeper historian who unearthed documentation that proved Pete Hill’s real name and birthplace. After being told about the errors, the National Baseball Hall of Fame had a corrected plaque made and unveiled it in 2010 at a rededication ceremony, which Ron Hill and other family members attended.

Growing up in Pittsburgh, just like his great uncle, Ron Hill had no idea he was related to one of baseball’s all-time greats.

“When I played Little League Baseball, my dad said we had a great baseball player in the family,” Ron Hill said. “But I didn’t know how great he was, didn’t know he was a pioneer of the Negro Leagues.”

He learned all that after his cousin, Leslie Penn, got a phone call from Gary Ashwill, a baseball researcher who focuses on the Negro Leagues.

“Gary Ashwill called my cousin in California and said, ‘You know, you have a great ballplayer in your family,’” Hill said. “And she called me, and I jumped right on it and started doing doing all the research and came up with all the stuff on him.”

Research proved Hill’s plaque had inaccuracies, including his birthplace. While Pete Hill apparently lived in Pittsburgh by 1889, he hailed from Culpeper County. After Nelson — the Culpeper historian — dug up the proper documentation and presented it to the Baseball Hall of Fame, the late Pete Hill was due for a second induction ceremony.

Hill, who died in 1951 and is buried in a Catholic cemetery in in Alsip, Illinois, never got to see how his achievements earned baseball’s ultimate accolade. Not knowing he was a relative, even family members weren’t in Cooperstown to see him enshrined the first time in 2006.

But thanks to plaque errors that called for a rededication ceremony for a relative they once never knew they had, they got to be there the second time.

The first 20 years of Hill’s career, 1899 to 1919, came in the pre-Negro League era, when he served as the cornerstone for some of Black baseball’s best teams, including the Philadelphia Giants, Leland Giants and Chicago American Giants.

The latter team was owned by Black baseball pioneer, Rube Foster, who wisely kept the talented Hill on the payroll on numerous teams over the ensuing years.

“He was a very good friend of Rube Foster. Rube Foster was the father of Black baseball,” Ron Hill said.

Being a baseball man, Foster recognized that his friend was talented. Known for his bat control, Pete Hill was line-drive hitter who could hit for power and to all fields, helping him lead the Cuban Winter League in batting average (.365) in 1910-11. But being a speedy lefty, he was just as capable of reaching first on a drag bunt. That speed also came in handy tracking down balls in the outfield, and his rifle arm kept baserunners honest.

“He was a five-tool player,” said Ron Hill, adding that when people talk about Josh Gibson and Satchel Paige as being among Black baseball’s best players in the days when they weren’t allowed to play in the majors, they also need to talk about pioneers, like his great uncle, who came before them.

“They have to start from the beginning to come up to now,” Hill said. “You cannot exclude these people.”

In the final five years of his career, Pete Hill got to compete in the Negro Leagues. During that time, he served as a player-manager for the Detroit Stars, Milwaukee Bears and Baltimore Black Sox, where he concluded his career in 1925. Ron Hill said his great uncle was also a writer who penned baseball articles.

“He was an all-around person, he wasn’t just an athlete,” Ron Hill said. “He was a smart person.”

Ron Hill was an athlete himself. He played college football, first at North Texas State University and then at the Tuskegee Institute (now called Tuskegee University). Playing defensive end and outside linebacker, he figured he was about 6-foot-1, 220 pounds during his college days.

“That was pretty big back then,” he said.

But at North Texas, Hill had a roommate who was a little bigger — Joe Greene, a 6-foot-4, 275-pound defensive tackle who later starred for the Pittsburgh Steelers and was inducted into the Pro Football Hall of Fame.

Like Greene, Hill also was involved with numerous Super Bowls. After serving as a major at the Allegheny County Jail, Hill worked security at the University of Pittsburgh and at Steelers games, the latter with Landmark Event Staffing Services, Inc.

Landmark handled security for some teams that went to Super Bowls. So while Hill didn’t go to actual games, he was in town during Super Bowls to help with security at teams’ hotels and practice areas.

Later, when he lived in Los Angeles, Hill served as a community representative at Girls Academic Leadership Academy, doing everything from mentoring to helping with security at sporting events.

He moved to Frederick in the spring of 2020 to be near his son, Rashene, who already lived in the area.

As a young man, Ron Hill was in the U.S. Marines. He also worked in the music business, serving as a road manager for the Sugarhill Gang, whose 1979 “Rapper’s Delight” was the first rap song to enter the top 40 on the Billboard Hot 100.

Hill has a few Sugarhill Records (the Sugarhill Gang’s label) gold record awards hanging on his basement wall. As prominent as those framed discs are, the most striking thing on his basement wall is a painting. With an American flag as a backdrop, it depicts portraits of a stern-looking Ty Cobb on the left, a young Babe Ruth on the right and a determined looking Pete Hill in the center.

Devlin Culliver painted it for Lori Hill Emby, Ron’s sister, who lives in Cleveland. Ron Hill said Culliver was inspired by how Pete Hill has been compared to fellow baseball greats Ty Cobb and Babe Ruth, both for his skills and stature as a superstar, not to mention that all three were outfielders.

Pete Hill had something else in common with Ruth — both were known by nicknames rather than their given names. Nonetheless, thanks to the persistence of people like Ron Hill, Pete Hill’s given name is now properly engraved on his Hall of Fame plaque.