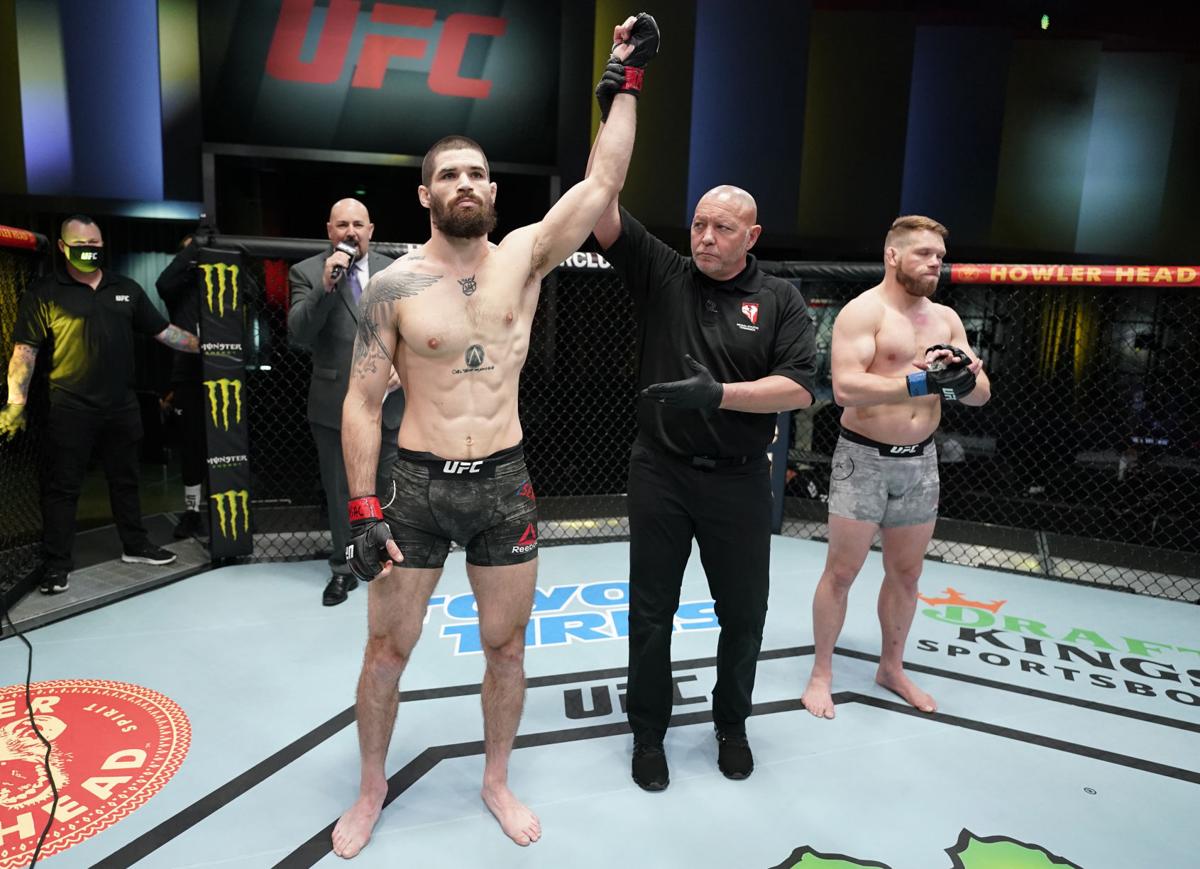 Matthew Semelsberger has his hand raised in victory after knocking out Jason Witt in a welterweight bout during the UFC Fight Night event at the UFC Apex on March 13 in Las Vegas. 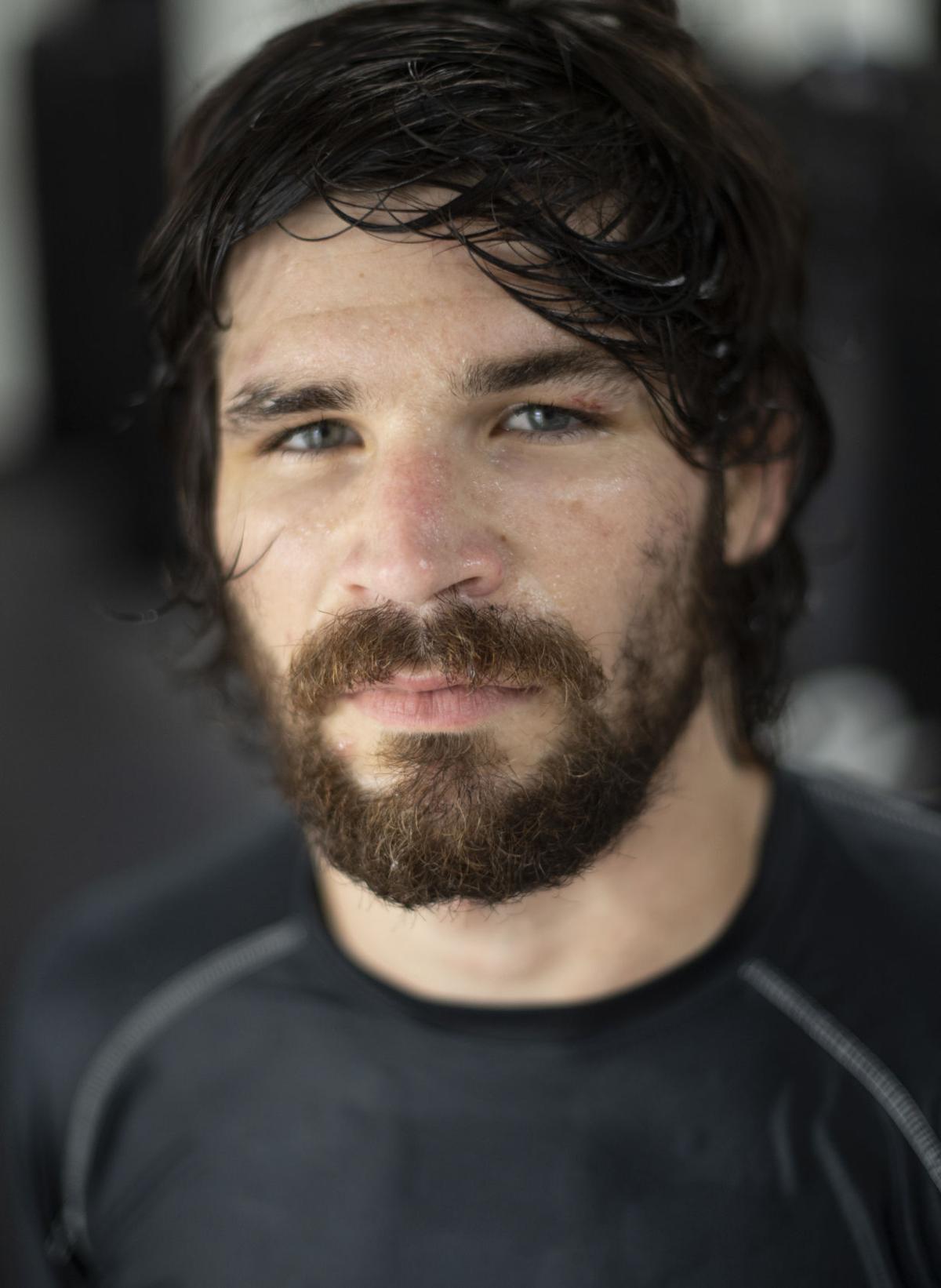 That night in Las Vegas, once the juices stopped pumping from an invigorating, gif-worthy knockout atop a Monster Energy logo at the center of the UFC’s famed octagon, Matthew Semelsberger took stock of what he’d just done.

The welterweight from Ijamsville realized that, in his second UFC fight, he might’ve set the bar impossibly high for himself when he obliterated Jason Witt with a straight right hand to the chin in a mere 16 seconds on March 13.

Everyone who steps foot inside that cage likely dreams of a similar scenario playing out in their favor. And when it did for Semelsberger, a daunting question fleetingly crept into his mind: How do I follow that up?

“It was kind of like ... ‘Oh, crap, I really put on a crazy performance there, so a lot of people are going to be expecting that next time I go in,’” he said Monday.

The uneasiness dissipated quickly, though. He got home and, after a week off, got back in the gym — a benefit of coming out of a fight with zero physical damage after so earnestly bouncing an opponent’s head off the canvas.

And yet another benefit came to fruition soon enough: A chance to climb back into the octagon, in relatively short order, against another prospect who could help vault him up his weight-class rankings.

“Semi the Jedi” (8-2 overall, 2-0 UFC) will go for his sixth consecutive win Saturday in the preliminaries of another Fight Night card at UFC Apex in Las Vegas. He’ll be countered by Kalinn “Khaos” Williams (11-2, 2-1), who has a pair of under-a-minute knockouts on his recent ledger. Prelims begin at 4 p.m., airing on ESPN 2 and ESPN+.

The rapidity with which Semelsberger dispatched Witt allowed the Urbana High alum to remain fight-ready.

“Obviously that’s the goal: Hit and not get hit. And I pretty much did that to a T this last fight,” Semelsberger said. “I guess you could say I was fortunate to go in there and find that shot early and put [Witt] away.”

A “consummate pro,” according to manager Steven Gaugler, Semelsberger got right back to trying to “elevate” (a word he uses often) his techniques in hopes of continuing the rise he’s been on since signing with the UFC in August 2020.

The pressure of living up to that devastating victory left him soon, but the buzz surrounding it lingered for awhile. Even in a sport where individuals get separated from their synapses rather often, Semelsberger’s win was a jaw-dropper, at the time the seventh fastest KO in company history.

It was the most emphatic finish of his four-year pro career. He likened the feeling of landing such a shot to laying a big hit on the football field (he was an all-conference college safety at Marist before he left school to pursue MMA).

“You don’t really feel anything,” he said, “like you’re punching through a piece of paper.”

After he ripped that right hand, Semelsberger hardly emoted. He was “calm and grateful.” He said the precise manner of victory and his minimal reaction showed his maturation as a fighter. He recalled how his first pro TKO resulted in him going “buck wild” in celebration.

But after the Witt result, he acted “like I’m an accountant, and I’m just crunching numbers, and doing my job.”

Jon Delbrugge, one of Semelsberger’s trainers at Crazy 88 Mixed Martial Arts in Elkridge, said they were surprised that Witt chose to strike with Semi to start the fight — but he wasn’t surprised at the result or the victor’s straight-faced response.

“It humbles you when you flatline somebody,” Delbrugge said. “A shot like that could kill somebody. When you throw it and unleash it, and the guy’s out cold, it’s some scary [expletive].”

Social media was full of Semelsberger mentions that night. But he’s not one to get caught up in that world. Shortly afterward, he got a new phone and never bothered to log back on to Facebook, for instance.

And here is where he made a “Karate Kid” reference: “Like Mr. Miyagi said: ‘Daniel-san, life is about balance.”

It was another example of a progression produced by being able to pour all of his energy into the fight game as a member of the sport’s top organization.

“The advancement happens so much faster with these guys once they make that transition to the UFC,” said Gaugler, who is part of Wildbunch Management. “He’s always looked good, but it’s amazing the progress that happens when that’s all you have to do.”

For Semelsberger to maintain that pace, a win over Williams is necessary. The quality of Semi’s opponent has been elevated, and so has his spot on the undercard (they’re scheduled to be the fourth fight of the event, rather than in the leadoff position where he was slotted in his two previous bouts).

And he could not be more pleased with the pairing. It’s slated for three five-minute rounds, and Semi is the slight betting underdog.

“I think this is a dream matchup, man. He’s a guy who’s not afraid to let things sling ... and I’m also that way in my own right,” Semi said. “It has all the makings of Fight of the Night type of fight.”

Delbrugge said Williams — a Lansing, Michigan, native who is coming off a unanimous decision loss to Michael Pereira on Dec. 19 after consecutive knockout wins in 30 and 27 seconds — likes to throw heavy combinations. There’s obviously been a focus on striking during Semelsberger’s camp — which included a week-long stint in the high altitude of New Mexico — but not to the point where he neglected his ground game, which might be needed if Williams’ power begins to tilt the fight in his favor.

Still, Delbrugge said, they’re confident in Semelsberger’s chances, especially if he backs up his strong technique with intensity.

“The basics can go a long way,” Delbrugge said. “Khaos, he’s not a K-1 [kickboxing] world champ, he doesn’t come from a high pedigree of striking. So I think we can go out here and go strike for strike.”

Another positive outcome could send Semelsberger, 28, up the rankings of a talented division or perhaps into a more prestigious portion of a UFC card. Semi admittedly strives to put on a show, but he also knows he’s at a stage in his career where piling up wins is more important than style points.

That’s perhaps why it wasn’t so difficult for him to forget the “Oh, crap” moment after his last appearance.

“Matt’s knockout might as well have happened 25 years ago,” Delbrugge said. “The world has completely moved on. They remember that night, that it was cool. And he got notoriety from it. But it’s on to the next one.”