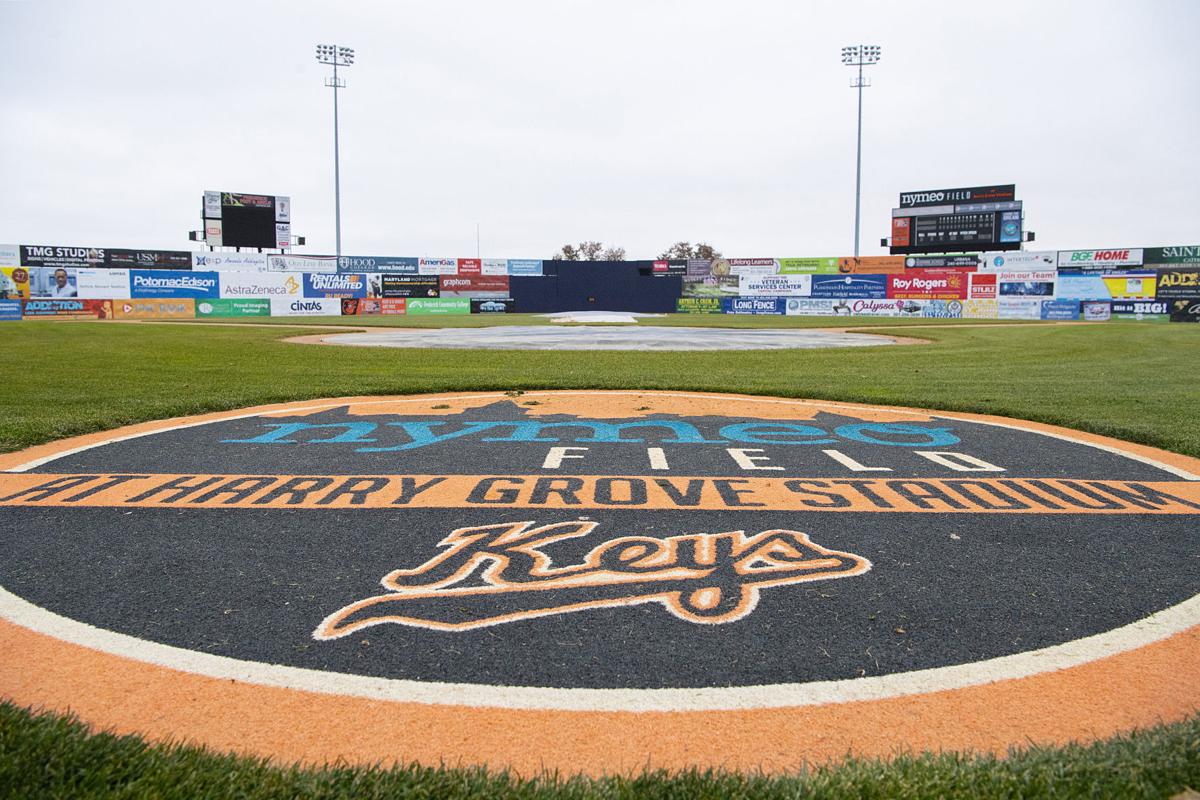 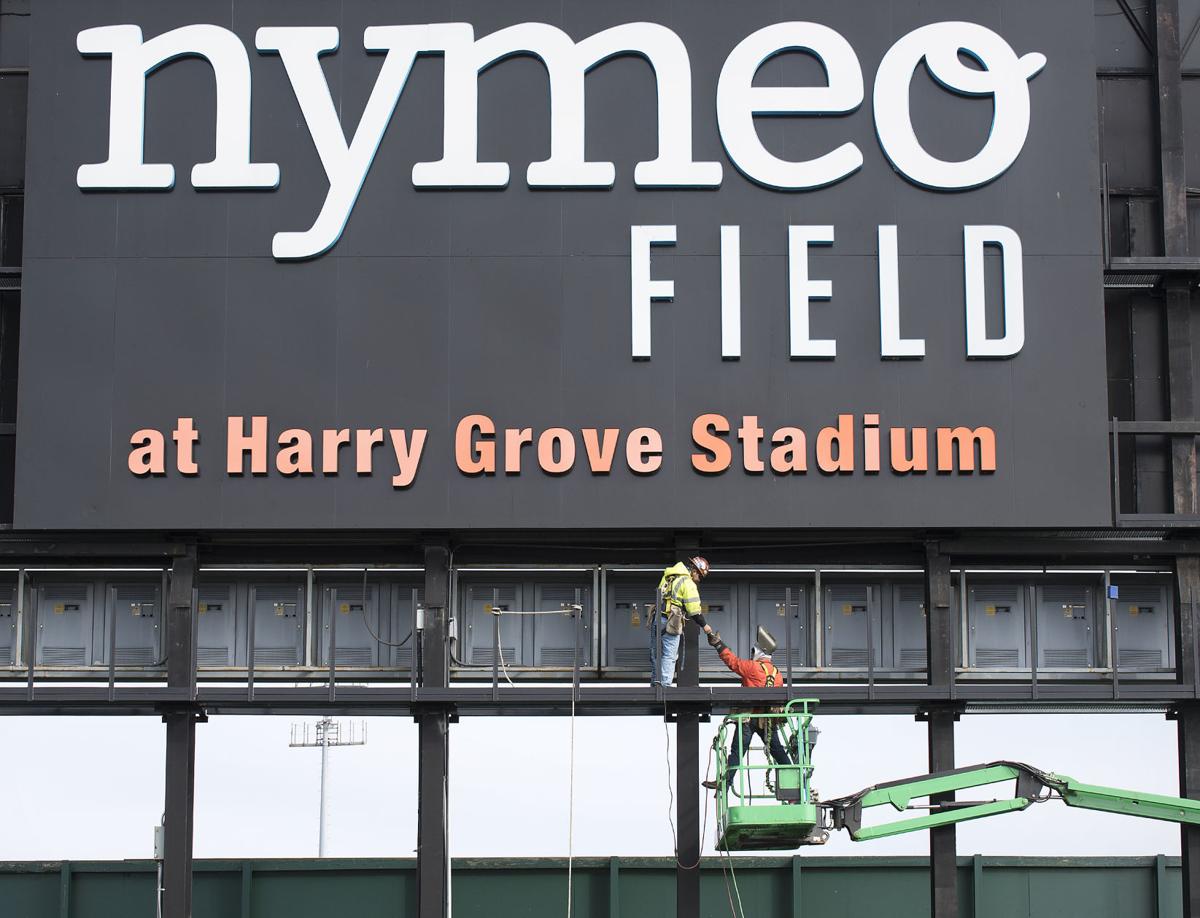 Workers from Baltimore Steel add a new catwalk Wednesday to the back of the scoreboard at Nymeo Field at Harry Grove Stadium. The home opener for the Frederick Keys is Thursday at 7:00 p.m. 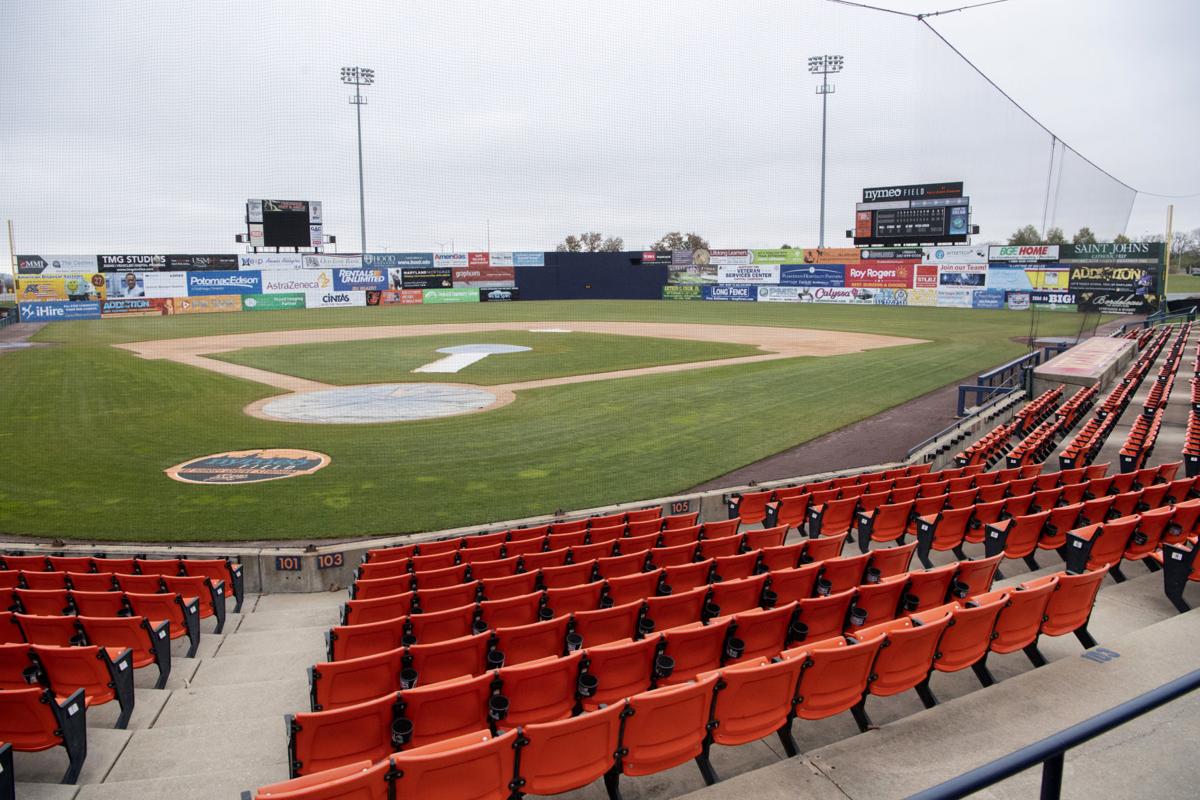 Workers from Baltimore Steel add a new catwalk Wednesday to the back of the scoreboard at Nymeo Field at Harry Grove Stadium. The home opener for the Frederick Keys is Thursday at 7:00 p.m.

On another perfect evening as summer approaches, Dave Ziedelis flips off the light in his office and heads home at a traditional closing hour.

It should not be this way.

Ordinarily, the place where Ziedelis has worked for the past 16 years — a place that is home to some of the most familiar sights and sounds for this time of year — would be a beehive of activity as the sun begins to set.

There would be phone calls to make, weather forecasts to check, a staff to oversee, sponsors and customers to greet and, ultimately, a professional baseball game to watch.

But, as Ziedelis heads out the door and toward the parking lot, the place is eerily quiet, especially for early June.

“It’s completely bizarre,” said Ziedelis, the general manager of the Frederick Keys, the advanced Class A minor league affiliate of the Baltimore Orioles. “In 32 years of professional sports, it’s nothing I have ever experienced.”

For Ziedelis and his staff, this feels like the offseason that will never end.

After Gov. Larry Hogan declared a state of emergency in Maryland on March 5 due to the coronavirus pandemic, 12 of the Keys’ 18 full-time employees began working from home almost exclusively, Ziedelis said.

Opening Day was a little more than a month away, as the Keys’ 2020 season was originally scheduled to begin April 9 in Fayetteville, North Carolina. The home opener was scheduled for April 16 against Myrtle Beach.

Maci Hill had been in her new position as the team’s Director of Marketing for a little more than a month when the pandemic threw her life into flux.

“Strangeness is at an all-time high,” she said.

There is great uncertainty facing the Keys that extends well beyond whether any baseball will be played in 2020.

Last November, the Keys appeared on a list of 42 minor-league teams that could be contracted, as Major League Baseball hopes to cut costs while improving pay and working conditions for players in a new Professional Baseball Agreement with its minor-league affiliates.

The agreement governs the way the Major League Baseball does business with its 160 minor-league teams. It is set to expire in September after last being extended in 2011.

“I was surprised because the Keys are a successful franchise,” said Keys owner Ken Young of seeing the team’s name on the contraction list.

Young owns five minor league franchises, including three that are affiliates for the Orioles.

He is the President of Maryland Baseball Holdings, LLC, which operates the Keys and Double-A Bowie Baysox for the Orioles. A separate company run by Young owns the Norfolk Tides, which is the Orioles’ Triple A affiliate.

In a phone interview with News-Post last week from his home in Tampa, Florida, Young acknowledged substantial investments would need to be made to keep the Keys as a viable major-league affiliate.

The team’s current home, Nymeo Field at Harry Grove Stadium, was opened in 1990 and lacks some of the modern amenities of younger ballparks, such as more spacious clubhouses.

Young said the team is ready to invest in the facility, even though many minor-league teams are strapped for cash and wondering if they could survive the loss of a season.

“This [pandemic] is about as big a negative as I have ever been involved in during my time in professional sports,” said Young, who put together a group that bought the Norfolk Tides in 1993. “It comes with human trauma. No matter what you do, loved ones and others will be affected.”

The Keys have so far weathered the economic storm unleashed by the pandemic through the assistance of a Payroll Protection Program loan from the U.S. government.

Young said there is no question, as of yet, about the team’s financial survival, and it has yet to lay off or furlough any of its full-time employees.

Although, that will change at the end of June when the Keys will furlough nine workers, starting July 1, with hopes of bringing them back as quickly as possible.

“It’s one of the toughest things we’ve ever had to do,” said Andrew Klein, who is in his fourth year with the Keys and third as the assistant general manager. “I had a hand in hiring everyone on our sales staff.”

As the team plans for the future, it is constantly having to adjust to the ever-changing circumstances beyond its control.

Will there be a season? Will fans be allowed in the stands? If so, how many? What will the minor-league landscape look like beyond this year? Will it include them?

“There is a plan,” Hill said. “If we find out tomorrow that we can play, we can’t afford to be saying, ‘Where do we even start?’”

Once there is clarity about the 2020 season, Keys' season-ticket holders will have the option of receiving a refund or applying a credit to next season for games canceled by the coronavirus, according to Ken Young, the team's principal owner.

If there is a shortened season this year, season-ticket holders can receive a partial refund or roll a partial credit into next season, according to Young.

"Anyone who wants credit or a refund for scheduled games that were canceled will have the opportunity to do one or the other," he said.

Ironic that the same company owns Frederick & Bowie. If the minors do contract like the proposal says, Bowie has the AA stadium seating, but Frederick draws more fans.

One thing this virus has taught us, is that we really don't need sports to function.

We certainly don't need the Steelers! But as a baseball fan, and a Keys fan, I really can't wait for baseball games to begin.

True, we don't need sports to function, just like we learned that we don't need to eat at restaurants to eat... but it also taught us that we need both for sanity. The Keys have been a positive for Frederick, they need to stay!

Maybe you don’t but I do. Already two grandsons missed their High School Baseball season as did all Spring Sport athletes. Sports are one of the few things we ALL can enjoy together.

"18 full time employees?" No wonder they're strapped for cash.

When the government finally allows the doors to open, I'll be there! Hopefully very soon!!