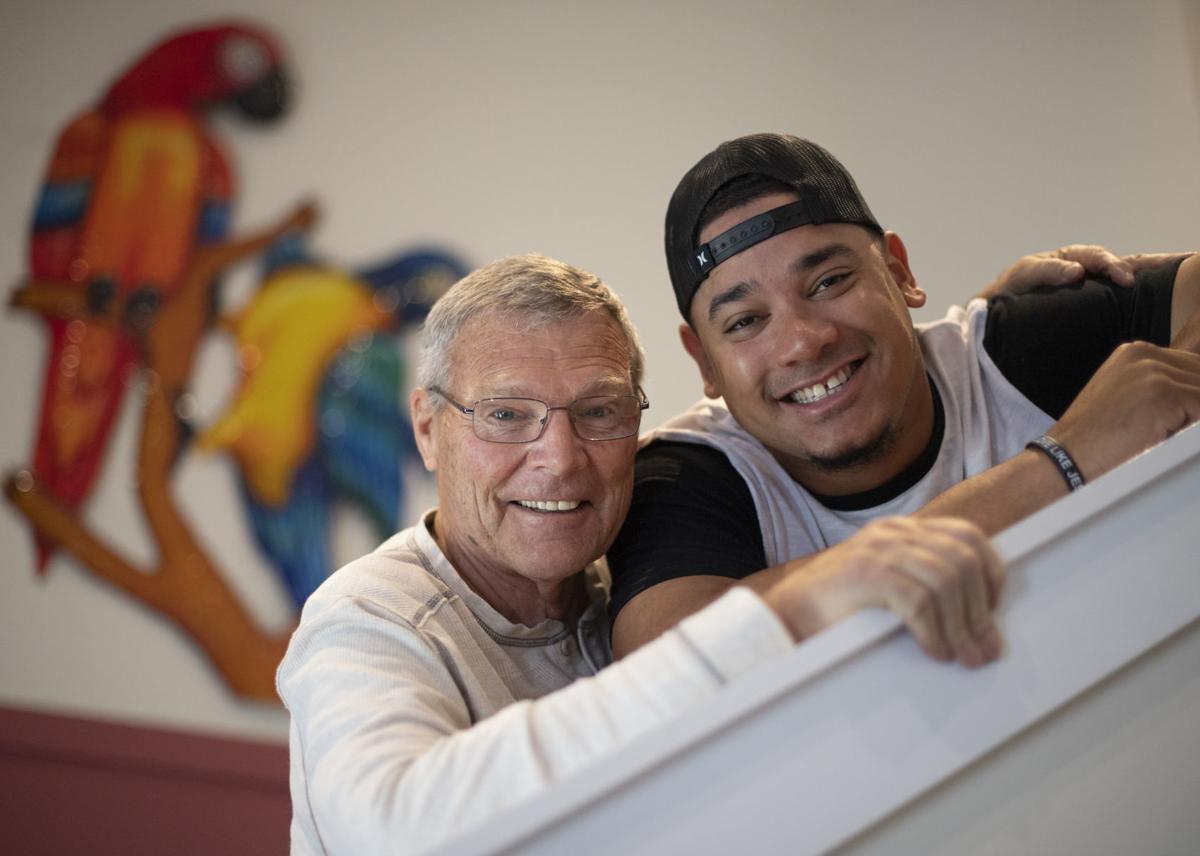 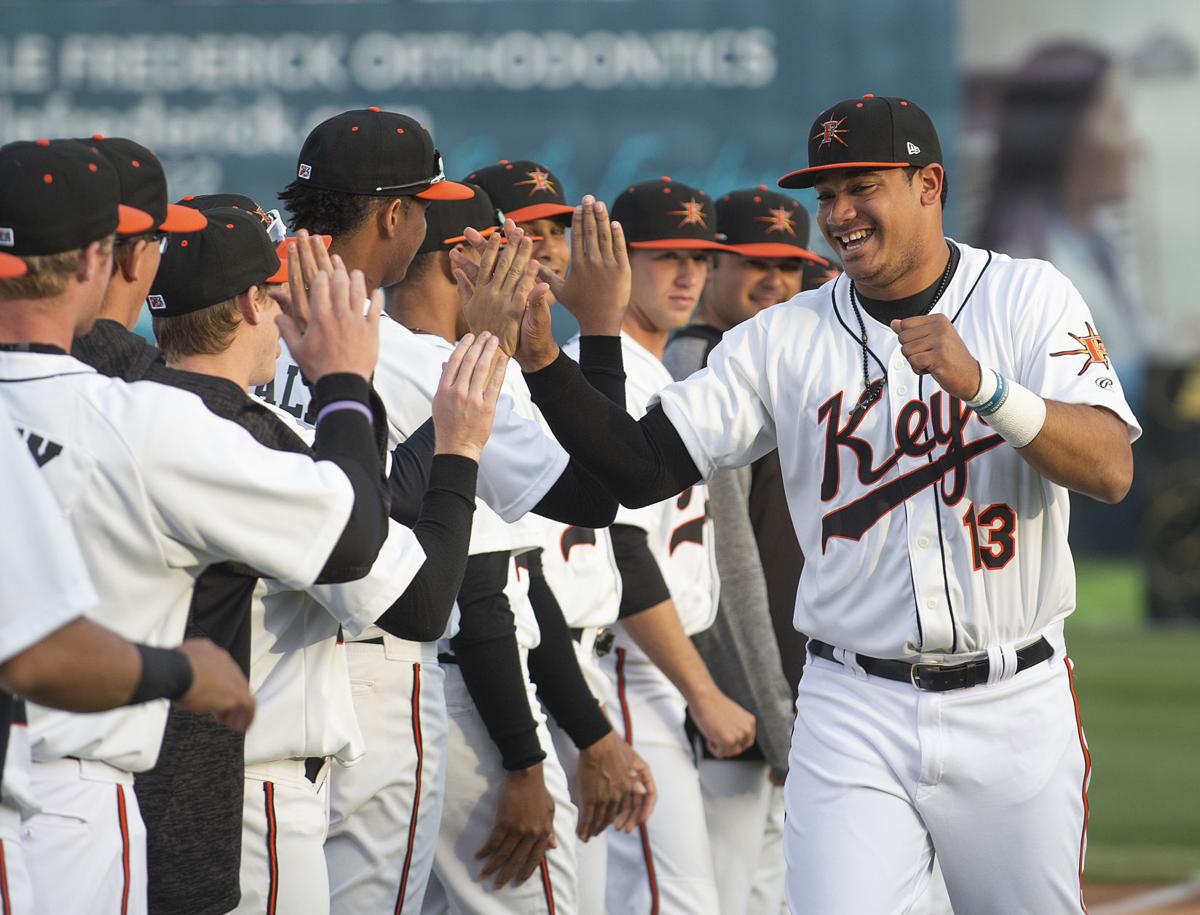 The Frederick Keys’ Jomar Reyes high-fives his teammates as the team is introduced at the start of last year’s home opener. 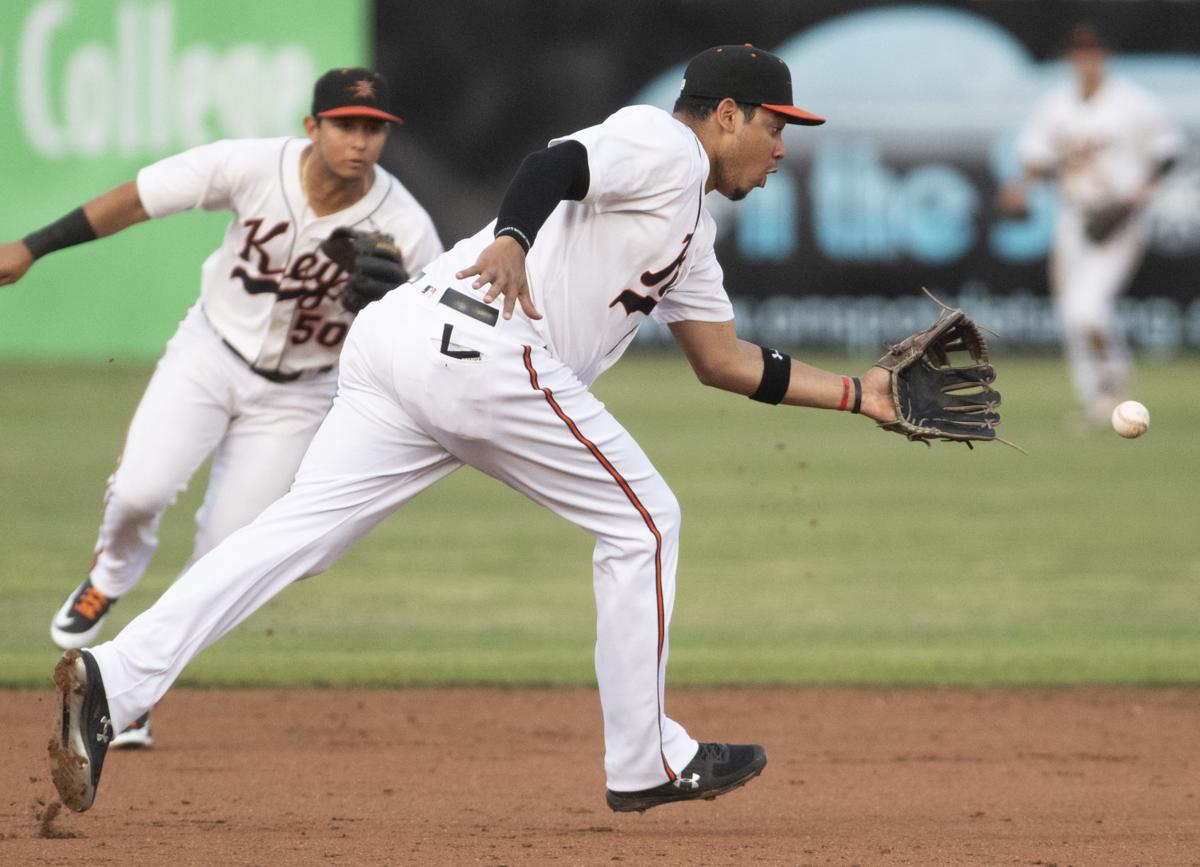 The Frederick Keys’ Jomar Reyes high-fives his teammates as the team is introduced at the start of last year’s home opener.

Snacking on some cherries while seated at the dining table of his Frederick home, Bill Munz fondly shared a story about his new housemate when a notification chime on his cellphone abruptly interrupted him.

Munz quickly reached for his phone, and a voice with a distinct New York accent gained some pep as he discovered the notification was related to his housemate — someone he now calls his adopted grandson.

“Looks like they’re losing already,” Munz said as he received an update on the Frederick Keys’ road game against the Potomac Nationals through the MiLB Now app.

The 75-year-old Long Island native was referring to Keys third baseman Jomar Reyes, a 22-year-old third baseman who hails from the Dominican Republic and has played for Frederick since 2016.

Munz then made the slightest of pauses before gushing about Reyes.

“He has really, really made my life,” said Munz, Reyes’ host father for the Keys’ 2019 season. “Just having him here has made my life.

“It’s just nice to have somebody in the house.”

Less than a year before Munz opened his doors to the Keys minor leaguer, he did have someone living under his roof: his second wife, Debbie Myers. The two had been living together for 11 years and married for four, spending plenty of nights on the dance floor. The last one occurred in May 2018 at the Cancun Cantina in Hanover, when Myers collapsed while the two were dancing, succumbing to what Munz described as a stroke.

Look around Munz’s home, and reminders of Myers are easy to spot. On one end of his dining room, an encased Maryland license plate of the vehicle she drove sits on a small table. It reads LINDYHP — a nod to her affinity for the Lindy hop. On the other end, Munz has propped up a 4-foot-tall slab of meticulously polished granite that includes embedded fossils. He recently spotted it in San Antonio and purchased it as a reminder of the memorable times he and Debbie shared in the outskirts of the Texas city, where they thoroughly enjoyed dancing in the state’s oldest continually run dance hall.

While Munz endured grief and loneliness in his home after Myers died, he had joined a coffee club that regularly met on weekday mornings at the Frederick Coffee Company & Cafe. The club, made up mostly of retirees, carried on conversations touching on a wide range of topics, giving Munz a much-needed bright spot in his life.

At one gathering in March, one of the coffee club members, Jack Topchik, brought up the behind-the-scenes work of his neighbors, Jim and Amanda Addington. The Addingtons find host families for Frederick Keys players who arrive in Frederick before the start of the season, and Topchik asked Munz if he’d be interested in hosting a player.

“In his own mind, he was thinking, ‘Do I really want to do this? I’ve never done it before,’” said Topchik, who served an an editor for the New York Times news service division for 40 years and currently writes columns for The News-Post every other week. “The convincing had to come from himself.”

After consulting with the Addingtons, Munz committed.

The Addingtons paired up players and host families at a late-March meet-and-greet, where Munz introduced some of his quick wit to Reyes.

When Munz arrived at the event, he was told to take a seat and that Reyes would arrive shortly. A few minutes later, Munz sensed the hulking presence of a 6-foot-2, 220-pound Keys player behind him, and his eyes widened as he looked up and saw Reyes in person for the first time.

“What do they call you, Tiny?” Munz asked him.

Munz had never been enamored with baseball. As a 10-year-old in New York City, Munz played catcher for a Little League team but quickly realized the sport wasn’t for him.

He became passionate about running at Sewanhaka High School — the alma mater of four-time Olympic discus champion Al Oerter — running the half-mile in 1 minute, 56.5 seconds. The owner of a successful business that manufactured collapsible steel elevator gates, Munz later made Annapolis his home for 30 years, and for much of that time, he raced J30 sailboats in the Chesapeake Bay. All the while, he didn’t give any thought to baseball.

“Basically, it was zero,” Topchik said when asked if Munz showed any interest in the game at coffee club meetings before the baseball season began. “He would say that: I don’t like baseball.”

Then Reyes came along.

Wanting to connect better with Reyes, Munz found himself trying to soak in as much knowledge as he could about the sport. Munz estimates that he attends 90 percent of the Keys’ home games.

“It’s really satisfying,” Reyes said of Munz’s stronger interest in baseball as he spoke through a translator in teammate Daniel Fajardo. “He used to ask me, ‘What is a double play? What is this? What happened here? The infield fly [rule]? What is this?’

Munz watched an episode of the PBS television series “American Masters” titled “Ted Williams: The Greatest Hitter Who Ever Lived.” That helped start a bit of a fascination with the Boston Red Sox legend, and Munz later checked out Williams’ book, “The Science of Hitting,” and suggested that Reyes read it.

While Reyes respectfully declined, saying he couldn’t read English, it became apparent to Reyes that Munz genuinely cared about his performance on the field.

Born and raised in Hagerstown and showing an appreciation for her city’s history, Myers acquired a photo of San Francisco Giants great Willie Mays — his professional debut took place at Hagerstown’s Municipal Stadium — making his famous catch at the cavernous Polo Grounds in the 1954 World Series. Munz had Reyes take the framed photo with him to a game, and the Keys third baseman went 5-for-5.

Munz said he will give the photo to Reyes if he hits two home runs in a game.

“It feels like it’s my family,” Reyes said of living with Munz. “You know when you play good or play bad, your parents will always support you. I feel the same support when I [see Munz].

“It doesn’t matter how I play, he’ll always be there to support me.”

Some of that support involves giving Reyes free rein in the kitchen after games.

After games, Munz said, Reyes will arrive home at approximately 11 p.m. and spend up to an hour in front of the stove. He’ll make traditional Dominican plates that include rice, beans and plantains, but he’s always willing to experiment and expand his list of options. So he’ll either call his girlfriend, Geraldine Adames, or watch YouTube videos to get some tips.

“It relaxes me a lot, learning how to cook different stuff every day,” Reyes said.

In late June and early July, Munz showed support for his family, opening his doors to Reyes’ father, Jose; his mother, Maria; and his sister, Maurin. Ever since they arrived, Munz noted, Reyes’ batting average started to steadily climb. He was hitting .241 on June 26, but his batting average now sits at .279.

While the presence of family may have provided a spark for Reyes at the plate, Munz’s daughter, Linda Toscano, said having Reyes around has had an even more profound effect on her father’s life. When he takes in Keys games from behind home plate, Munz also enjoys interacting with family members and friends of other players, many of whom travel from faraway places. At home, Munz has started to watch Spanish movies, and Reyes will sometimes join him.

“My dad, all of a sudden, is obsessed with baseball,” Toscano said.

Topchik has warned Munz that because Reyes has performed so well lately that he may get promoted to Double-A Bowie. Regardless of what happens, Munz seems intent on maintaining a strong relationship with Reyes and his family. He has already planned to meet up with Jose Reyes next March in Sarasota, Florida — the home of the Orioles’ spring training site.

“It’s opened up another world, and he really enjoys it,” Toscano said.

Thank you to the journalist who wrote this piece, and especially to Mr. Munz, for sharing that part of his personal life which speaks to his generosity, kindness, openness, and the re-building of a meaningful life after loss and grief. And as for Mr. Reyes and his family............welcome to the very best of America. Wishing you great good luck, and many homers, in your baseball career!