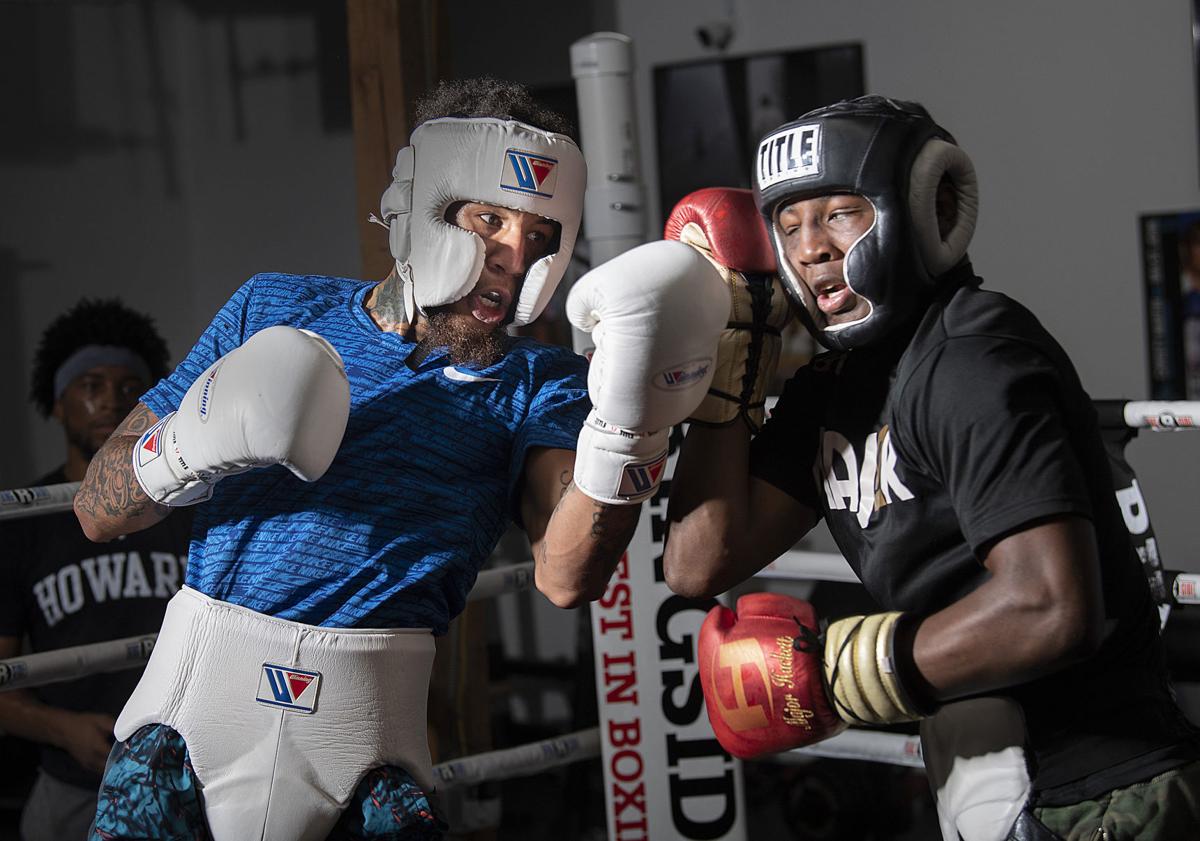 Malik Hawkins, left, spars with Jalil Hackett in the ring Wednesday night at Turner’s Boxing Club in Frederick. Hawkins is an undefeated (18-0) super lightweight professional with Mayweather Promotions who has been training for the past month in Frederick ahead of his Oct. 10 bout on Showtime at Connecticut’s Mohegan Sun Casino. 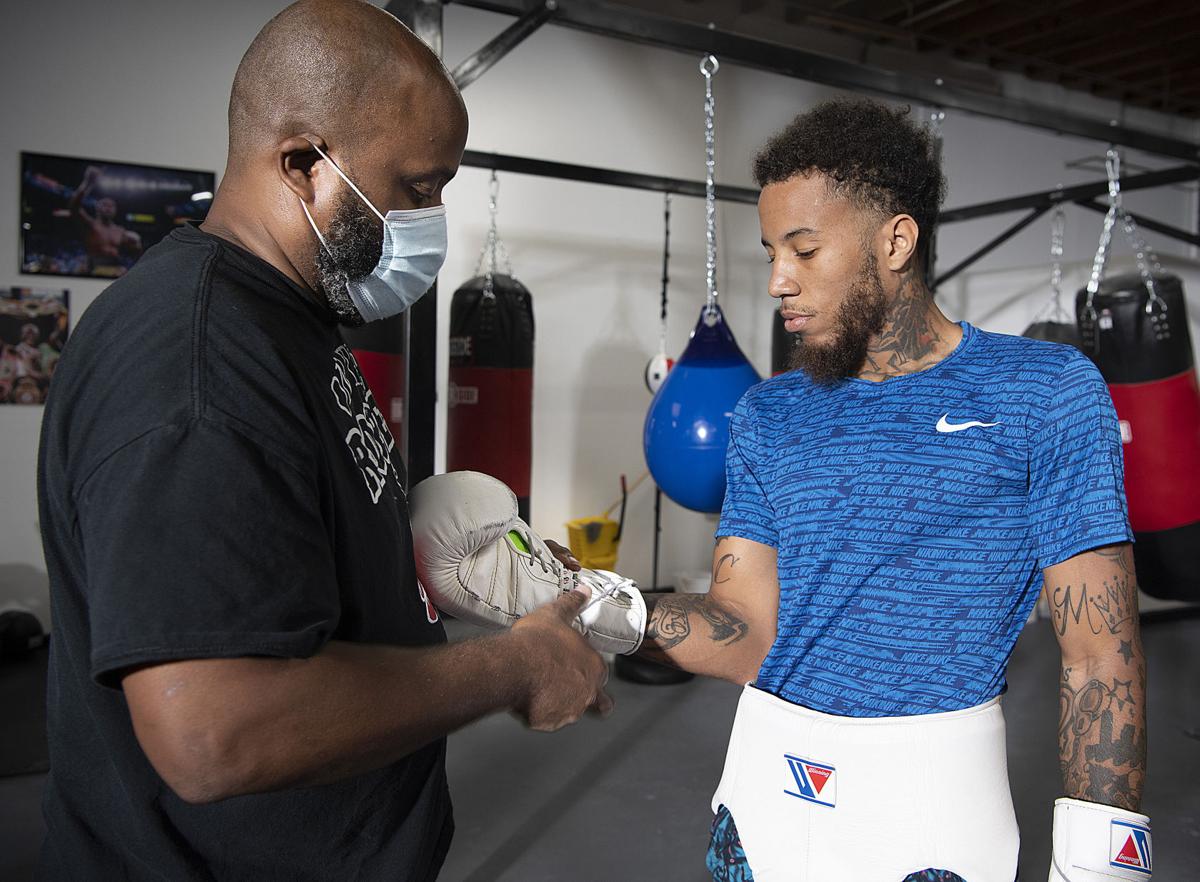 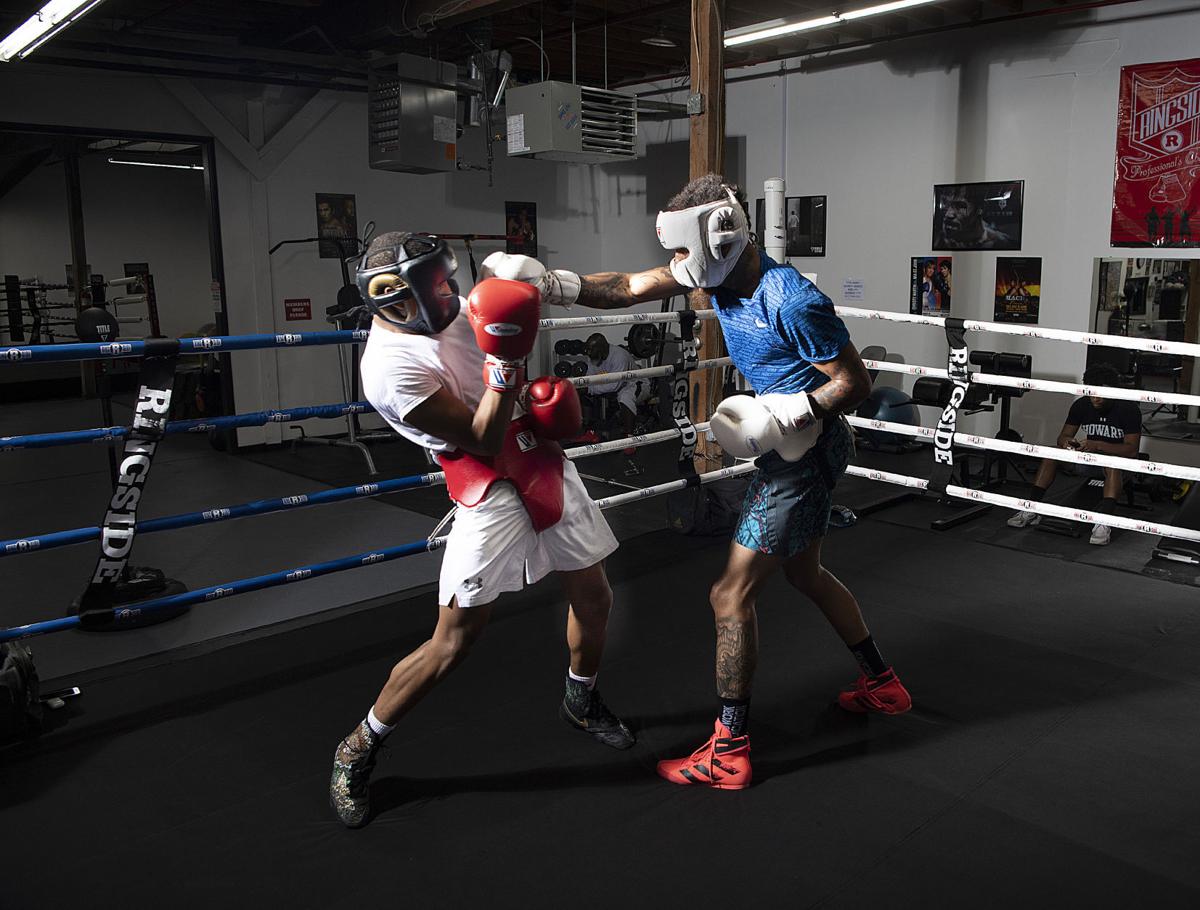 Malik Hawkins, left, spars with Jalil Hackett in the ring Wednesday night at Turner’s Boxing Club in Frederick. Hawkins is an undefeated (18-0) super lightweight professional with Mayweather Promotions who has been training for the past month in Frederick ahead of his Oct. 10 bout on Showtime at Connecticut’s Mohegan Sun Casino.

Malik Hawkins was bullied as a kid growing up in Baltimore. He got into fights. One incident at age 13 led to him getting booted from a football team. And, similar to many origin stories like this, those experiences ended up with him in a boxing gym, seeking knowledge on how to defend himself.

Hawkins’ parents took him there. But he wasn’t necessarily keen on the idea of learning a new sport.

“I just wanted to learn how to fight,” he said.

Then, after that football incident, after he applied himself, “it took on a life of its own.”

A decade later, Hawkins is an undefeated (18-0) super lightweight professional with Mayweather Promotions. And that “life of its own” has Hawkins in Frederick, training for the past month ahead of his Oct. 10 bout on Showtime at Connecticut’s Mohegan Sun Casino.

Hawkins has set up camp at Turner’s Boxing Club, a 1-year-old gym on East Street owned by Gonzell Turner Jr. Hawkins was introduced to the club by his manager and Frederick resident, Everett McNeely, and trainer Kenny Ellis.

Turner did his best to flood social media with photos and information about his new place, which he opened to help mentor kids through the discipline of the sport, but also perhaps to become a destination for some more heavy hitters in the boxing world.

In search of a good spot removed from the bustle of Baltimore for Hawkins to prepare to face Subriel Matias (15-1) next month, Hawkins’ team contacted Turner. They donned facemasks for a visit in March.

Smitten with the quality venue they’d discovered, a working relationship was born.

“Basically, it was still close to home,” Hawkins said Tuesday over the phone. “And basically, Frederick kind of feels like home. It’s quiet. It’s real low-key.”

All the better to help him focus and sharpen after nine months since his last bout, a TKO of Darwin Price in Atlanta.

Hawkins, 24, said he’s been with Mayweather Promotions, a premier company in the sport, for about a year. He’s on what he hopes will become a climb to the top, anxious for the first of what he says could be three or four bouts over the next year.

“Winning this fight just takes me on to bigger and better things, much bigger opportunities, which will lead to a title shot down the line,” he said.

At 6-feet tall, Hawkins generally has a range advantage over his 140-pound counterparts. But, he said, due to a rearing in which he sparred often with shorter partners, he relishes mixing it up on the inside.

One of his idols is Thomas Hearns, and his “go-to” boxing history clip is of the Hitman pummelling Roberto Duran in the 1984 “Malice at the Palace.” With a comparable frame, Hearns has inspired Hawkins to weaponize his right hand.

Those tendencies help set him apart in the ring.

This fight has him opposing a somewhat notorious pugilist. Matias made headlines in July 2019 when the man he defeated, Maxim Dadashev, died four days later due to brain injuries suffered during their encounter. With Matias dominating, Dadashev’s corner had called a stop to the fight after the 11th round. Dadashev was hospitalized afterward.

Known as Iceman, Hawkins is undaunted.

Asked if he feels pressure to maintain his undefeated ways, Hawkins said no, just before an audible yawn. He expects to outclass the 5-foot-8 Matias, another shorter foe — but one who has knockouts in all 15 of his wins.

“My style, it don’t match up with him,” Hawkins said. “I feel as though my skills are way better than his. I just gotta go and get in the ring and just show it, just show that he’s not on my level.”

They are scheduled to go 10 rounds.

If it goes that long or if it ends earlier, whether in victory or defeat, Hawkins expects Frederick to continue being a part of his career.

“I’m looking forward to a real long relationship out here,” he said.

Turner shares the same hopes — and that maybe one of Hawkins’ Baltimore stablemates and close friends, WBA regular lightweight champion Gervonta Davis, will consider bringing a camp to his gym, further exposing Frederick to big-time boxing.

“They feel at home when they’re here,” Turner said. “It’s a better environment out here because they don’t know anybody, and they can focus on their training.”