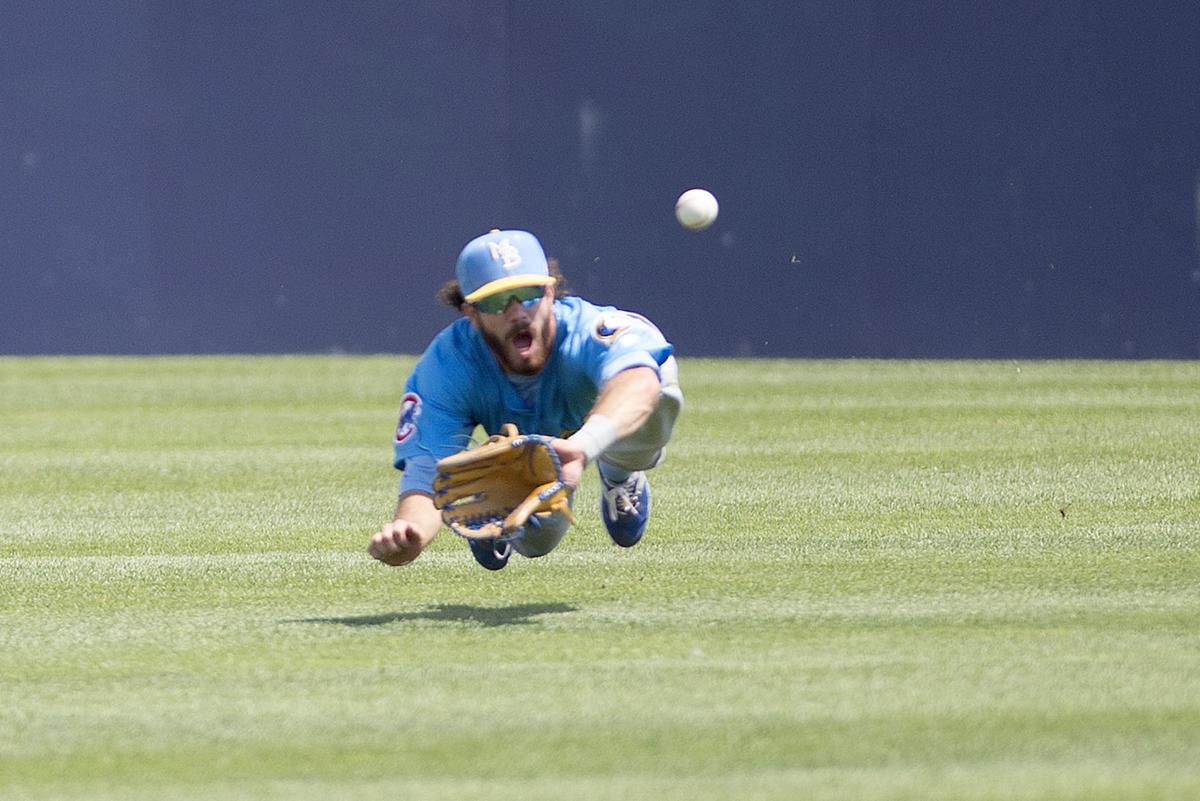 Middletown High alum Connor Myers, shown playing in 2017 for the Myrtle Beach Pelicans at Nymeo Field in Frederick, has been running hills in Clarksburg as he awaits the return of baseball activities. He plays in the Chicago Cubs minor league system. 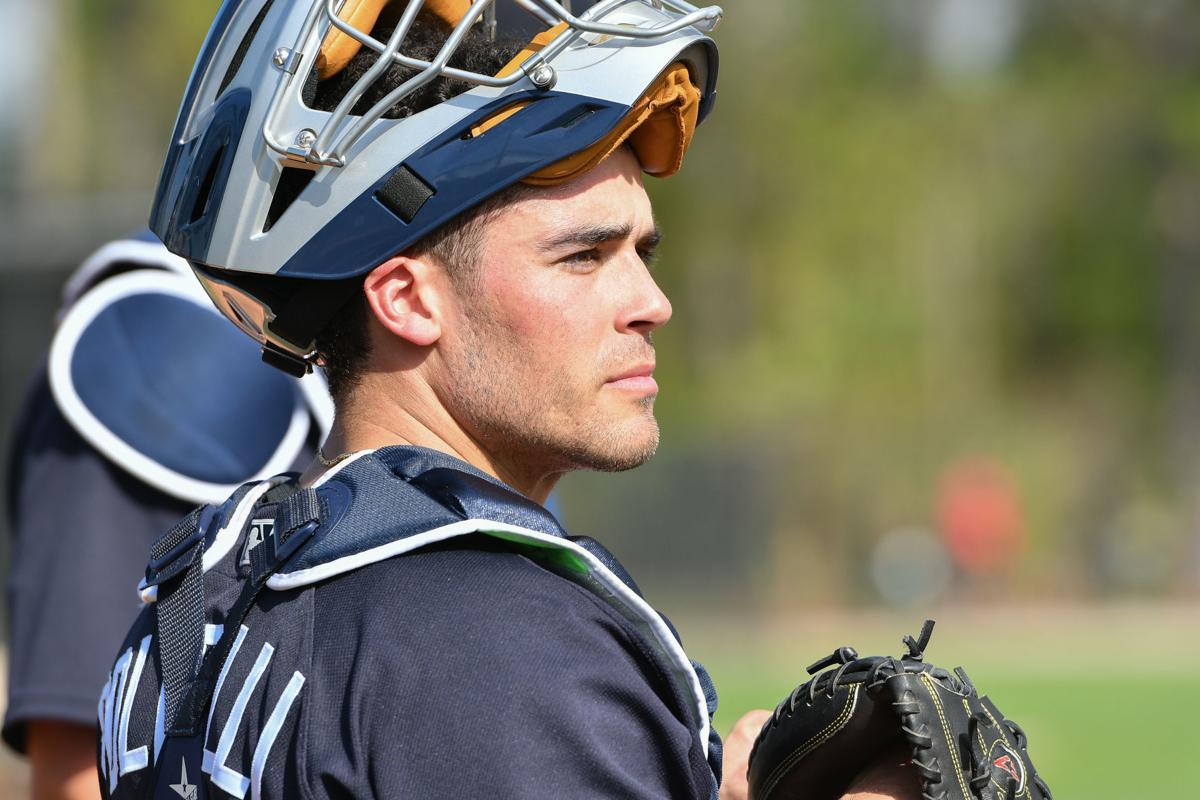 Brady Policelli, shown in Tigertown in Lakeland, Fla., earlier this year, wishes he was still honing his versatility in the major league camp, but he’s doing his best to see the positive aspects of having a break from spring training.

Middletown High alum Connor Myers, shown playing in 2017 for the Myrtle Beach Pelicans at Nymeo Field in Frederick, has been running hills in Clarksburg as he awaits the return of baseball activities. He plays in the Chicago Cubs minor league system.

Brady Policelli, shown in Tigertown in Lakeland, Fla., earlier this year, wishes he was still honing his versatility in the major league camp, but he’s doing his best to see the positive aspects of having a break from spring training.

Brady Policelli’s bosses told him to keep his cellphone on him at all times, for they could call him out of the blue one day and tell him to ramp up his baseball activity.

Policelli sincerely hopes he receives that phone call — sooner rather than later.

Right around this time, both Policelli (Detroit Tigers) and Connor Myers (Chicago Cubs) had been accustomed to kicking off their seasons in their respective minor league systems.

With the coronavirus halting all activity in the world of sports, they have instead hunkered down in their home state of Maryland.

“I’d be lying if I said I was doing a lot,” Policelli said of his involvement in baseball.

The Walkersville graduate and his fiancée, Bailey Wilson, are staying in the home of the latter’s parents on farm land in Adamstown. Meanwhile, Myers and his girlfriend, Taylor Little, live in an apartment in Clarksburg.

“I’m ready for baseball season – super ready,” said Myers, a Middletown alum, when reached by phone on Sunday. “I’m ready for it right now, but I’m making the most with what I’ve got right now.”

Gov. Larry Hogan has issued a series of executive orders since Major League Baseball and minor league baseball first announced delays to the start of the their respective seasons on March 12.

Four days later, the same day Myers and Little boarded a flight to BWI from Arizona — home of the Cubs’ spring training complex — Hogan ordered gyms, among other establishments considered non-essential, to close.

Myers may turn to some of the unconventional methods he has seen on social media to keep himself in optimal playing shape. One member of the Cubs organization did some weightlifting using two cement buckets and a two-by-four. Another used a large Cubs suitcase to do lunges.

“We have a couple hills in Clarksburg that I might go run,” Myers said.

He just recently fished out and set up the Body by Jake door gym he used in college, and he’s considering entering a push-up challenge that would involve Little sitting on his back.

Policelli has the benefit of using a full gym in the basement of the Wilson household, but he might enlist Wilson’s help as time goes by.

While Wilson family has a pop-net he can use to hit baseballs off a tee, he may also find a way to get his fiancée to provide live pitching.

“I probably have to find a way to get a screen so she can stand behind it and maybe flip me some here soon before we start getting really bored,” he said.

As a catcher, Policelli also sees the positive aspects of getting an extended break from baseball.

At Detroit’s spring training facility in Lakeland, Florida, he spent a good amount of time catching bullpen sessions for the plethora of pitchers who were in camp, accumulating his fair share of bumps and bruises.

“It’s a good time for me to recover a little bit physically,” Policelli said.

Policelli’s younger brother, Christian, plays baseball at the U.S. Naval Academy, and he also returned to Frederick County after the Patriot League canceled all spring practices and competition three weeks ago. So the brothers can help each other keep their arms in shape by throwing outside.

Brady said he never saw one of Christian’s high school games in person, and now the latter rarely gets opportunities to return home. For Brady, it seems quite strange that he and Christian are home at the same time during the spring — something that hasn’t occurred in years.

“Me and my fiancée are in a situation where we don’t see our family eight months out of the year except for a couple of visits here and there,” the elder Policelli said. “That is one of the brighter sides of this.”

Policelli must be mindful of Hogan placing restrictions on gatherings exceeding 10 people. Shortly after arriving in Maryland on March 18, the Policelli brothers joined Walkersville senior Brett Ahalt at a local batting cage, where a group of four had gathered.

It’s the kind of activity Policelli and Myers planned on organizing once or twice a week.

Myers and recent Middletown graduates Luke Pryor, Graham Brown and Jack Sullivan were part of a group of six at a recent gathering in Middletown, with each player taking their turns getting in some work at the plate and in the field.

Like Christian Policelli, Pryor (Mount St. Mary’s), Brown (Potomac State) and Sullivan (Hood) had their spring seasons canceled. And like Myers, they wanted to do something on a baseball diamond.

While the minor league baseball season has been pushed back indefinitely, Myers won’t have too many issues keeping busy.

Last fall, he worked for JB Seafood owner Chuck Staley at the Frederick Fair, and when he returned to Maryland from Arizona, Staley informed him of a Costco warehouse in Monrovia needing workers to man shrink tunnels that package a variety of goods. By the end of his first week, he logged 57 hours.

All the work keeps Myers away from the unsettling news surrounding the coronavirus.

“A 10-hour day really keeps me off my phone,” said Myers, who has landed offseason work with UPS and Lululemon in the past. “You can’t really look at all the news.”

In the offseason, Policelli, the Tigers’ 13th-round pick in the 2016 draft, usually offers private lessons and coaching clinics. Now he spends much of his time lending a hand at the Wilson family farm, where his fiancee’s family is busily preparing to open BlueBird Manor — a new wedding venue scheduled to start business in the fall.

Policelli and Wilson also must prepare for their own wedding, which is currently slated for October. Policelli is considering the possibility of a baseball season extending beyond the point it normally ends in early September, which could throw a wrench into their wedding plans.

“There’s so much gray area right now with everything, especially with the minor league schedule,” Policelli said. “That’s our biggest concern right now, is how we’re going to go about that. But we’ll figure something out.”

Financially, all minor leaguers will have a bit of certainty as MLB announced on Tuesday that it will offer them weekly $400 stipends through May 31.

“I understand [the pandemic] puts a lot of guys in a tough situation, so with them doing what they could do to make sure we’re getting some type of payment, I think that’s an awesome thing,” Policelli said.

Myers viewed the arrangement as a strong gesture of appreciation.

“Since we’re not able to make money doing what we do playing baseball, it’s nice that they’re thinking about us enough to give us some money while we’re in this tough time,” he said.

Grinding in the minors

Last fall, Myers ended his season on a high note, hitting .391 over his final 13 games with the Double-A Tennessee Smokies before being called up to Triple-A Iowa to play in a playoff series against the Round Rock Express, the Houston Astros’ Triple-A affiliate.

In five spring training games for the Chicago Cubs this year, Myers went 1-for-6 with a walk and two RBI groundouts.

“I was just working on consistency, finding the barrel and making sure I’m doing the little things right,” Myers said. “Consistency is the biggest part of this game honestly. [I was] working on stealing, working on bunts, working on reads in the outfield.

“That’s something you have to keep doing because if you don’t keep on perfecting it, someone from behind you is going to catch up to you [and say,] ‘Hey, I’m here. Move over.’”

Policelli was invited to the Tigers’ major league camp for the second straight season, and he showed off some of the versatility the organization likes.

He received time at catcher, in right field and at designated hitter, going 1-for-8 with two walks and three RBIs, with his lone hit being his first spring training home run — a two-run shot in a victory over the Yankees.

Behind the plate, Policelli caught three runners stealing, including two in one game. The Tigers made a series of cuts throughout the spring but chose to keep him in their major league camp before the teams closed its facility two weeks ago due to the coronavirus pandemic.

“I try to keep my head down and look forward no matter what,” said Policelli, who was named an All-Star in the Florida State League last season for the High-A Lakeland Flying Tigers. “Definitely a cool feeling, [but] I try not to get ahead of myself or anything like that.”

Policelli logged at least nine starts at four different positions for Lakeland last year, enhancing his value in the organization. If the MLB season gets underway this season, managers will have the luxury of having a 26th man on their rosters.

Tigers manager Ron Gardenhire told mlb.com’s Jason Beck that he’d consider using that spot for a third catcher who could show versatility. Eventually, after some more seasoning in the minor leagues, Policelli could be a prime candidate for that spot.

“If that means being the 26th man and being a utility guy but still catching and playing everywhere, I’d love to do it. I hope someday that’s what will happen.”