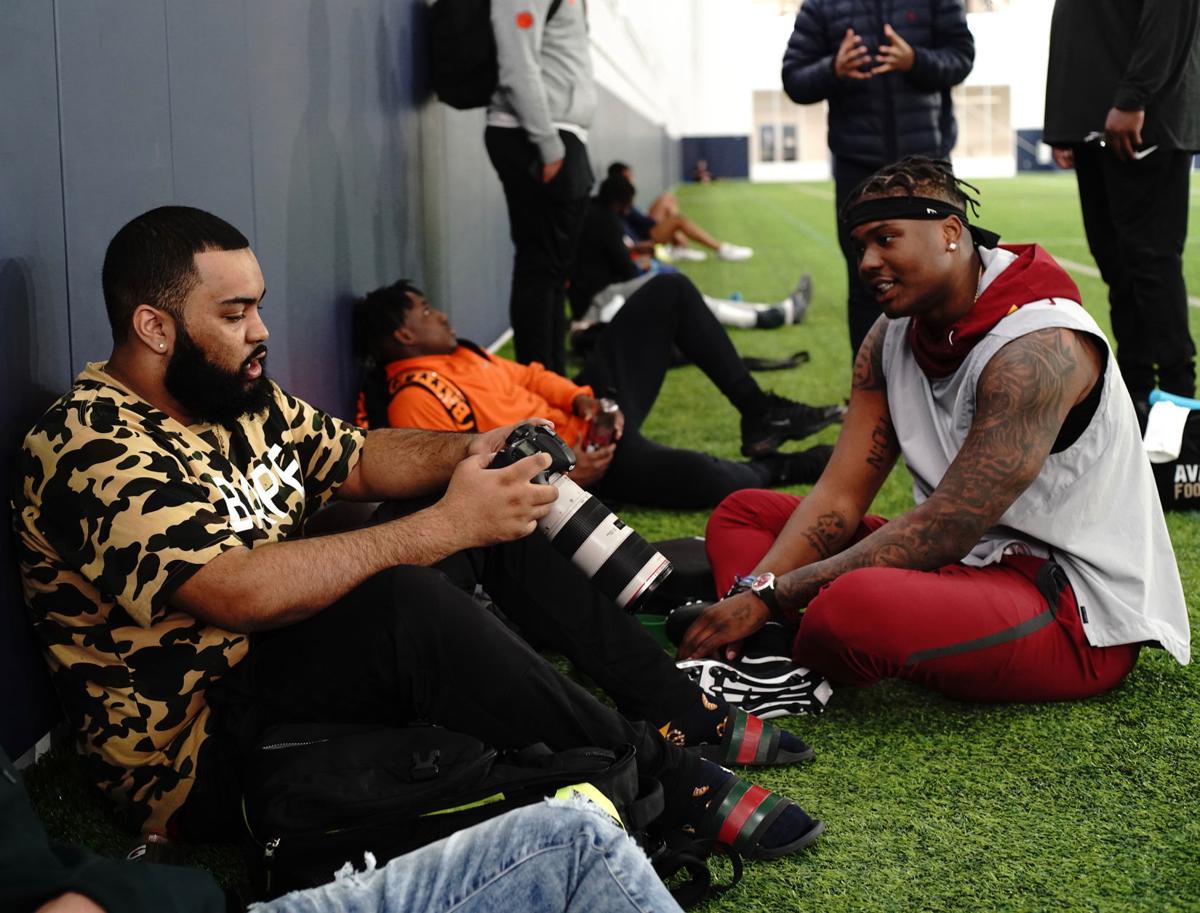 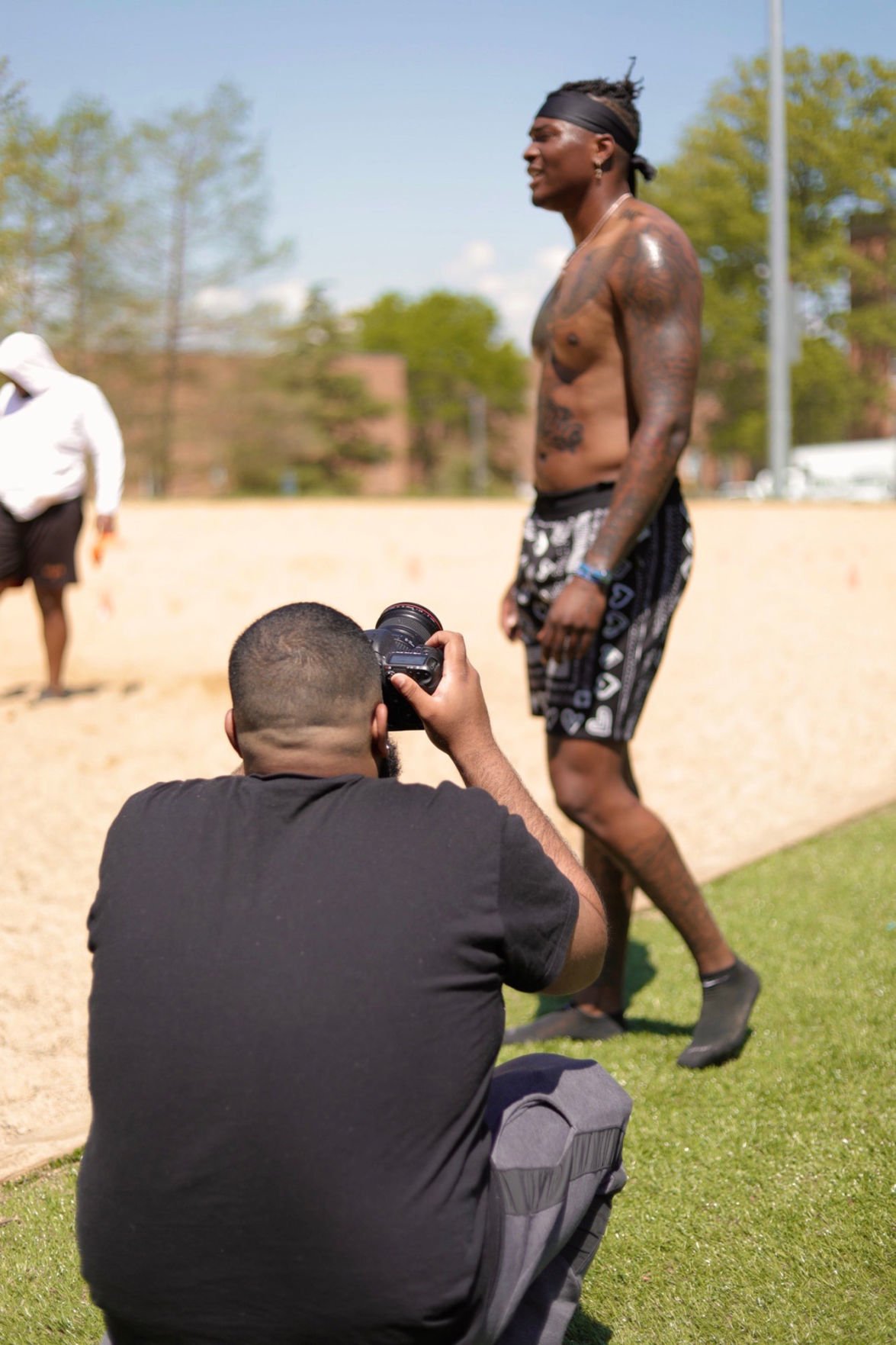 Var Turner, foreground, has been photographing Washington Redskins quarterback Dwayne Haskins since early March. The job has required him to document Haskins’ various workouts, which occur three or four times a week as he prepares for his first full season as the team’s starting quarterback.

Var Turner, foreground, has been photographing Washington Redskins quarterback Dwayne Haskins since early March. The job has required him to document Haskins’ various workouts, which occur three or four times a week as he prepares for his first full season as the team’s starting quarterback.

Var Turner landed a pretty nice gig with a big name in the region, but there was no guarantee it would be anything other than a one-off job when they got together in March.

Turner has experience handling high-profile clients as a graphic artist for well-known rap artists and professional athletes, so he wasn’t about to let his chance to make a good impression slip away. This ambition is partially what’s helped Turner seize opportunities and make connections. The other part is his sharp eye and natural knack for creating eye-pleasing content.

So on his way back to Frederick from The St. James Sports Complex in Springfield, Virginia, Turner stopped off to start working on the photos he’d taken that day of Washington Redskins quarterback Dwayne Haskins working out.

“As soon as I finished [shooting], I didn’t even come home,” said Turner, a 2011 Frederick High graduate. “I stopped at Tysons Corner [Center] just to upload the pics and kind of edit everything and send it over [to Haskins].”

A freelance designer since graduating high school, Turner had met Haskins through a video project with a mutual acquaintance, Haskins’ personal shopper. Turner then asked to tag along as a photographer while Haskins trained on March 6.

Turner’s work from that day got a strong response on social media. And yet another big-time partnership was born.

“As soon as [Haskins] got the pics, we initially set up another shoot two days after that,” Turner said Wednesday over the phone. “He was training, and he told me to come out. From that point, we just kept the schedule together and kept working.”

On Turner’s Instagram page (@imvar), he lists himself as Haskins’ personal photographer. Since early March, that job has required him to document Haskins’ various workouts, which occur three or four times a week as he prepares for his first full season as the Redskins’ starting quarterback.

Haskins, a Maryland native and first-round pick out of Ohio State in 2019, uses Turner’s photos on social media, giving his followers a glimpse of what he’s up to during the pandemic.

The coronavirus shutdown has made it challenging even for professional athletes to find space to work. So when one as young and social-media savvy as Haskins hits the field, he wants to share his experience.

That’s where Turner comes in.

“Var has a great feel for bringing a moment and a workout to life,” Haskins said in a text message. “To make the fans feel like they’re a part of the journey was the biggest thing [in establishing their relationship]. We don’t do this for attention, we do it so people feel motivated to chase their dreams.”

Turner, 26, has had to hustle since he first broke into graphic design as a relative beginner who hadn’t exactly set the world on fire as a student.

Despite becoming enraptured by the subject in school, Turner said, “I slacked off a lot.” Shortly after graduating from Frederick, though, a serendipitous turn of events and newfound focus had him designing custom album covers and promotional materials for major rap artists in a world he only dreamed of joining as a young fan of the genre.

A lot of what he does behind his computer screen and Canon camera is self-taught. But he has received guidance over the years from, among others, Patricia Stockman — who had taught Turner computer graphics and digital photography at Frederick High, back when some of his grades left something to be desired.

Turner admits he didn’t apply himself all the time in school. Call it immaturity, uncertainty or senioritis. Call it, like he does, “a weird time for me.” He’s open about his struggles back then, because “it’s all a part of my story.”

“Advice to the younger me: It’s OK to be lost, and face adversity,” he said Monday in a text message. “It’s life. It’s what you do to overcome what you’re going through, that defines you.”

Once he gained a clearer idea of what he wanted to do in the world of design, he began to harness his skills and further cultivate his style.

He reconnected with Stockman after he experienced his first tastes of success. He remembered that she had always believed in him.

“She’s helped me take it to a completely different level,” Turner said of Stockman, who now teaches the same courses at Oakdale High.

When Turner’s work is brought up, Stockman lights up. She thinks back on his disjointed time in her classroom and could not be more happy that he has capitalized on his talent, that she’s helped him in some small way.

“It makes me cry,” she said, her voice cracking with emotion. “You never know who you’re reaching, you really don’t, until sometimes years later. It’s such a great feeling. I’m so proud, and I tell him that.”

Now, Turner has become an exemplar for Stockman. Last year, she brought him in as a guest speaker for her computer graphics class.

“Knowing how successful Var has been in what he’s doing, combining what he learned — photography, graphics, starting up, how he markets himself and pushing through — I thought that would be valuable for my kids to see someone really close to their age, who sat in the seat like they’re sitting in.”

Turner has built his reputation through collaborating with a rapper like Soulja Boy and an NFL star like Jets running back Le’Veon Bell.

Now, he’s part of Haskins’ inner circle. He works closely with a player who is carrying a hungry fan base’s hopes. And the bond between Turner and Haskins appears picture perfect even through the jabs Haskins tosses at him for being a Philadelphia Eagles fan.

Their closeness comes through when Turner starts talking about Haskins’ workouts by saying, “When we go train ...” — even though Turner is there strictly to capture the action.

He gets to watch the 6-foot-4 quarterback make daily progress in hopes of entrenching himself with the Washington franchise. He sees the proven rocket arm, the trick throws Haskins could unveil this season and the underrated agility he began to flash in 2019 (the Redskins went 2-5 in his starts).

“His brain, the way he’s working, the way he’s functioning, the play-calling ability is through the roof right now,” Turner said of Haskins.

Obviously, he’s effusive regarding one of his primary employers.

But the feeling seems mutual.

“That’s my guy, he’s become one of my closer friends,” Haskins texted about Turner. “He will be my photographer for the rest of my life if I had anything to do with it.”