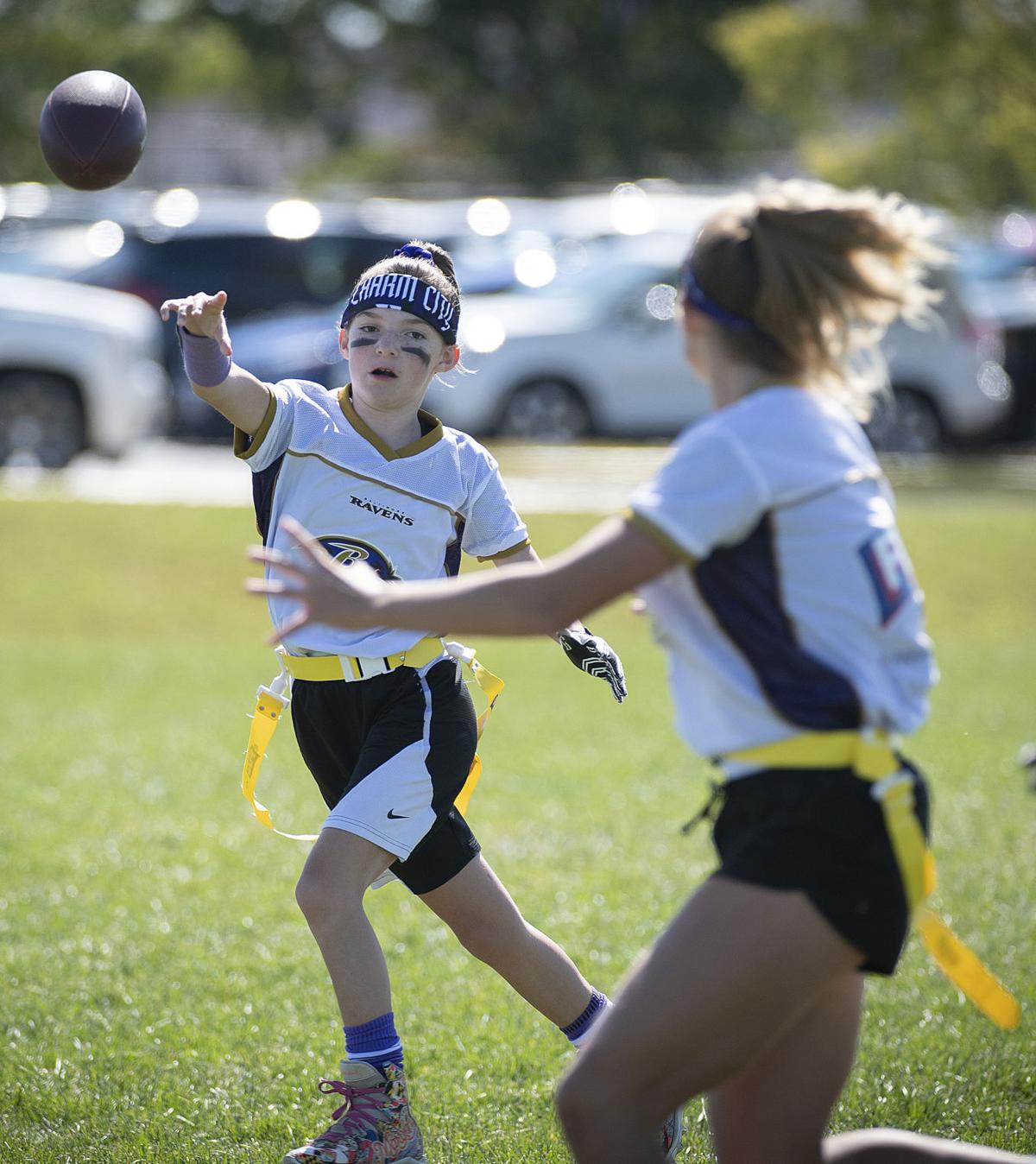 Quarterback Morgan Sherwood throws to Colby Johnson on Saturday at Urbana District Park during a flag football game. Sherwood and Johnson’s Ravens are the only all-girls team in the Frederick County Parks and Recreation league. 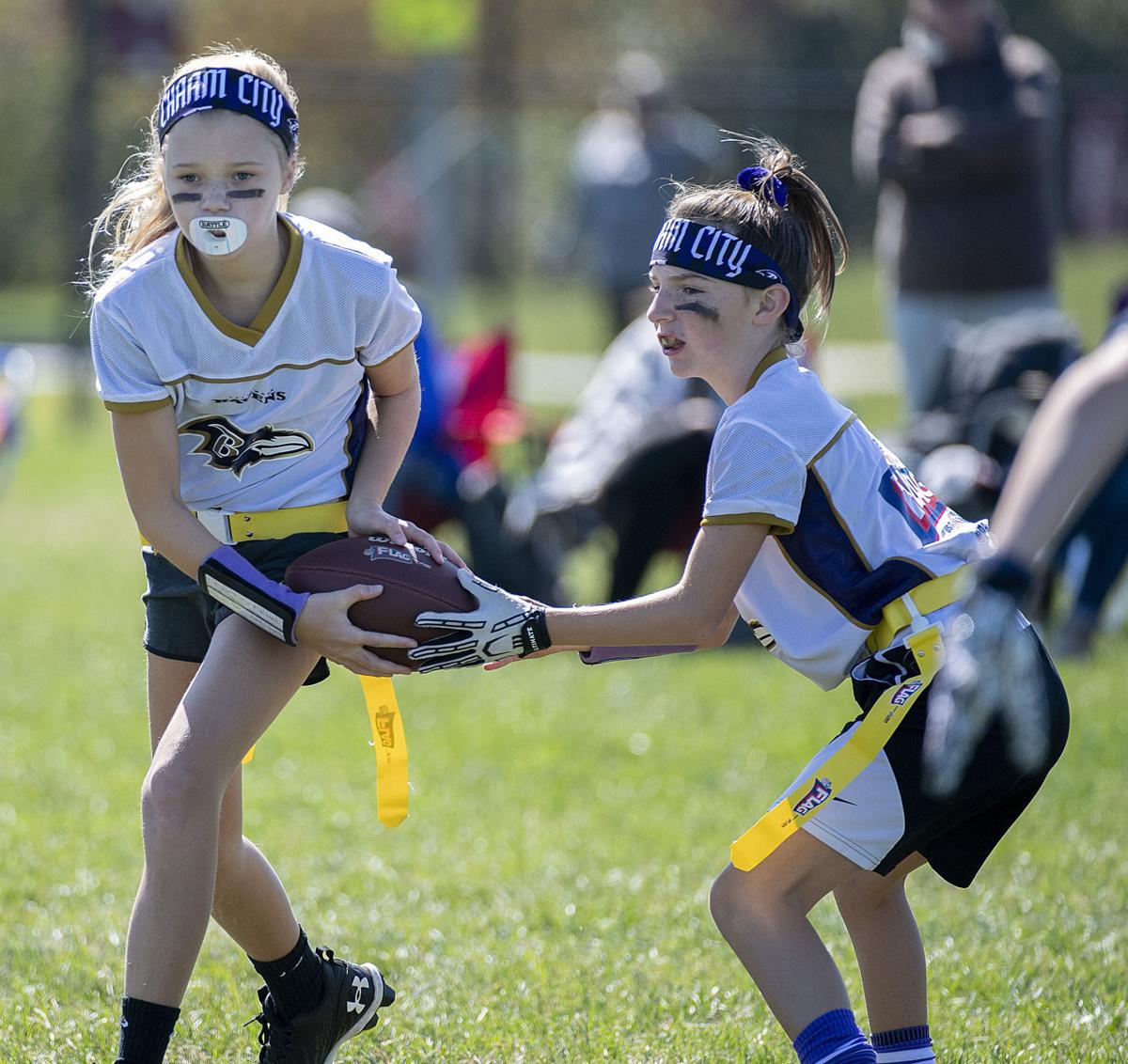 Morgan Sherwood hands off to Ava Donaldson on Saturday at Urbana District Park. The Ravens clinched their first win, 20-6, since forming their all-girls flag football team in early September.

Quarterback Morgan Sherwood throws to Colby Johnson on Saturday at Urbana District Park during a flag football game. Sherwood and Johnson’s Ravens are the only all-girls team in the Frederick County Parks and Recreation league.

Morgan Sherwood hands off to Ava Donaldson on Saturday at Urbana District Park. The Ravens clinched their first win, 20-6, since forming their all-girls flag football team in early September.

As the co-founder and president of a custom software company, Nick Damoulakis is used to holding meetings in his downtown office.

And as an experienced youth flag football coach, he’s accustomed to wrangling kids into a cohesive unit.

But when he gathered a group in the Orases conference room early last month, with pizza boxes open and the whiteboard up, this was altogether different.

Sitting before him were a bunch of seventh-grade girls that his daughter, Dana, had pulled together basically in a moment’s notice when her father agreed to coach them up if she found 10 players for a five-on-five flag football team in the Frederick County Parks and Recreation league.

It didn’t take long, given modern technology and a well-connected middle-school girl.

Dana, 12, got on her phone with one friend. Then another.

“We started adding more and more people to the call,” she said.

Seeing that her older brother, John, was set to commence with his 15-16 flag football team in a time when activities have been more limited than ever due to the coronavirus pandemic, Dana wanted in on the action, too.

So she asked. Almost jokingly.

“It was just kind of this funny thing,” Dana said of the genesis of her new team, the Ravens. “Like, ‘Maybe we should start an all-girls flag football team.’ And then one day I just called them all, and I guess it happened.”

The Ravens are three games into their inaugural season in the 11-12 league. The girls are progressing and gaining confidence in what Nick Damoulakis calls the most rewarding football campaign he’s experienced — including the one in 2019 when he coached his son’s team at nationals in Florida.

And it all came together because Dana noticed a novel opportunity and took charge. She said her efforts bogged down after reaching seven or eight commitments, but she refused to stop so close to the goal.

Her case to those who hesitated was as age-old as it gets: We’re talking boys vs. girls here.

Think about it, she appealed: “Girls playing football.”

At first, Nick Damoulakis said, some parents of girls who signed up had reservations about a group of novice females playing against males who’d, perhaps, been in the sport for years.

True: The girls, save one, had little knowledge of the game. For instance, Dana was aware only that the goal, gleaned from watching her brother play, was to pull off the ball-carrier’s flag. But Nick knew that, with youth flag football among this age group, it’s really “about knowing the game and the rules.”

Hence, the meeting in his office.

“So we spent the first week with the girls on just learning rules,” said Damoulakis, 44, who has coached his son’s team for six years. “We didn’t even get on a field. We went to my office in downtown Frederick, and we had a board up, and we went through all the rules.”

Before the girls' 101-level introduction, Damoulakis had taken them out for a field-walk, explaining of the zones that are important in flag football. Such as, there are pass-only areas five yards from each end zone and five yards from midfield. As another visual example, he let them watch his son’s team practice.

The Ravens held their own first practice the following week. Instead of having it at their home field of Urbana District Park, they held it in the Damoulakis’ yard — so the girls wouldn’t get sidetracked or intimidated by efficient boys teams that might’ve been drilling nearby.

“At the first practice,” Dana said, “it was all really confusing, and at least I felt that I couldn’t handle it all and I’d mess up.”

It helped, though, that one of the Ravens, Morgan Sherwood, was a seven-year flag football veteran. And it helped even more that she’s a quarterback. She’d been set to play on her old team when Dana’s text-message string buzzed her phone.

“I was excited and anxious to see how the season was going to go, because it’s never been done before,” Morgan said.

Before the games began, Damoulakis organized a scrimmage for the girls — against his son’s 15-16 team of boys.

“They were so good with [the girls],” he said. “They motivated them the right way.”

Damoulakis and Dave Sherwood both mentioned how well the girls listen. Not to mention another bonus Sherwood noticed about a bunch of new players: “You don’t have to undo any bad habits.”

Many of the girls are also basketball players, so their grasp of zone and man-to-man defense translates well to flag football. “And you just have to be aggressive,” Dana said.

After starting from Square One just weeks earlier, the girls were prepared for the start of the season.

“As we kept practicing and getting better, I started thinking we might actually do something and be good,” Morgan said. “I was getting excited.”

They would be one of 13 teams in their age bracket. Keith Tapley, Frederick County’s recreation supervisor, said the Ravens are the first all-girls flag team in his seven years on the job. And they constitute half of all of the girls in the entire fall league, which includes 518 participants.

In their opener, the Ravens scored the game’s first touchdown but lost by a TD.

The Ravens’ second game was another close loss — but the boys who had narrowly defeated them were impressed, no matter how confident they might’ve been heading into their clash against the new girls.

As those boys were leaving the field, Nick Damoulakis said, “they were like, ‘Man, are you kidding me?’”

The Ravens had become formidable.

They call their own plays on offense and their own coverages on defense. On cue, and with a little laugh, Dana lists all of the defenses she knows.

“They’re able to look at what’s happening and call it on the spot,” her father said.

By their third game last Saturday, the Ravens — wearing their matching headbands and eye-black — seemed ready to win.

And that’s just what they did.

Colby Johnson scored a touchdown on the first play of the game. Morgan Sherwood completed a difficult long pass to Claire Duclos that set up another first-half TD. And another key play came after a timeout with the Ravens backed up in their own territory — a fake double-reverse to Lilli Pontius against an aggressive defense.

“Sure enough, all five boys went the wrong way, and she just took off down the sideline,” Sherwood said.

They went on to win 20-6. It was their third straight game with zero penalties, in a symbol of how well-educated they already are on the sport.

The Ravens’ unique makeup and plucky, passionate play have produced an unexpected side-effect: They end up drawing bigger crowds than typical. According to both coaches, it’s not unusual to have around 75 people checking out their games, as parents and other players go to and from the park.

After Saturday’s win, Morgan and her father got stopped multiple times by admirers.

Said Nick Damoulakis, “A couple of them were talking, and they’re already like, ‘Are we doing this next year?’”